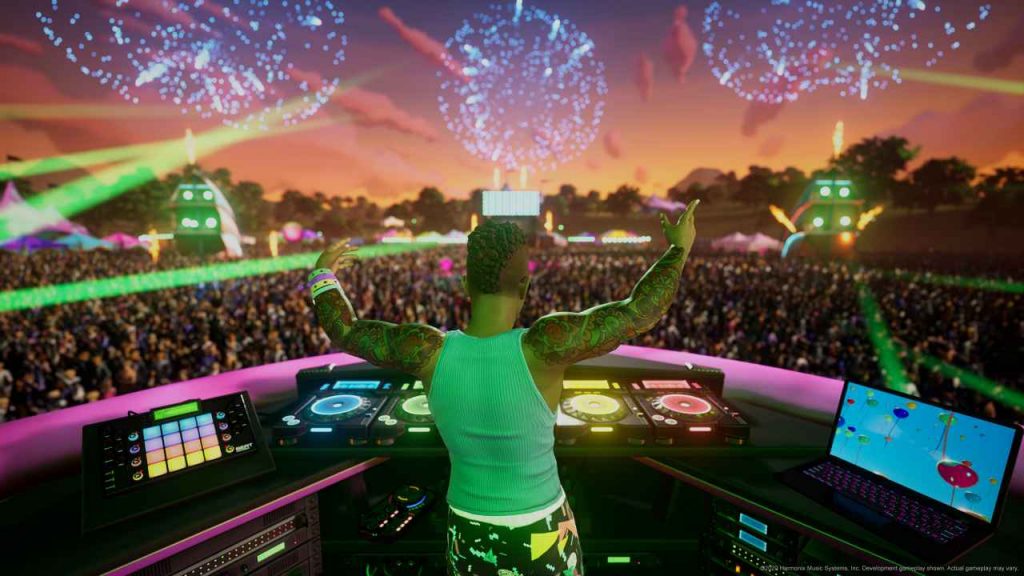 Fuser PS4 Preview – Music mashups are their own peculiar art form. Yes, there is an art to taking snippets of other people’s musical works and crashing them together to create something new. If you are a doubter, take a listen to a few of the many, many mashup videos on YouTube. Then take a listen to any of the five albums by the mashup DJ Girl Talk. There is a major difference between an “interesting experiment” mashup track and Girl Talk’s “ridiculously complex tapestry of sound that can elicit emotion and make me drive my car way too fast”.

After creating a wide array of increasingly complex music and rhythm games, developer Harmonix are building something new – a mashup emulator that allows anyone to sit in their living room and create fantastic-sounding musical collages. Fuser, Harmonix’s newest effort, is a DJ simulator that allows players to create insanely detailed stage shows and then wow a huge festival crowd with their spectacular mixing skills.

PSU sat down for a guided tour of Fuser’s features with Harmonix Project Director Daniel Sussman and Community Manager Zoe Schneider, before getting some hands-on time with an early build of the game. As you might imagine from Harmonix’ track record, the end result is fairly incredible.

A History Of Mixing

This isn’t the first time that Harmonix has dipped their toes into the world of musical mashup. In 2017, the company released Dropmix, a physical game that has players remixing songs by laying a series of cards on a plastic electrical gameboard. Obviously not happy with any old tinny speakers, Harmonix had Dropmix connect to your sound system via Bluetooth, with the game’s graphical component runs through a free companion app. All of this sounds a little complex, but in reality Dropmix can be set up in about 15 seconds.

The collectible cards (the game comes with 64, but add-on packs are where the action is) each contain a snippet of a song – a bass line, a vocal, a drum track, etc. By laying down the cards on the board in order to get points, players dynamically create absurdly cool mashup tracks – with Dropmix dynamically changing the tempo and key on tracks to make sure that it all holds together. The effect is somewhat magical.

Fuser works in a similar way – just exponentially more complex. The final game will release with over 100 songs (the build we played had just over 30). Each song is divided up into four tracks – typically drums, bass, guitar, or vocal – though synths creep in where appropriate. Each of these four elements corresponds with the face buttons on a controller. By clicking the correct button, players can “lay down” tracks from any four songs, mixing them together as desired.

Mix It Up However You Want

Want to hear DMX spit “X Gon Give It To Ya” to the instrumental from “Old Town Road”? Fine. Wanna replace that beat with the drumline from “Rock the Kasbah”? Also fine. Perhaps you’ve always dreamed of a duet from Cardi B and Billie Eilish, performed over the music from BOC’s “(Don’t Fear) The Reaper”. Practice for about ten minutes and you will be able to pull that off, with all the cowbell your heart desires.

Fuser’s Freestyle mode lets you go nuts, creating any off-the-wall mix you can come up with – though it takes a sure hand to be certain your timing is tight enough to keep your tracks from sounding clunky in transition.

From the above, you can see that Harmonix clearly spared no expense gaining access to some of the most popular (and presumedly pricey) songs in the world for Fuser. With over 70 songs yet to be revealed before the game releases, the extent (and weirdness) of the library has yet to be determined. But judging by what we’ve seen, this will be a collection of smash hits.

When we asked Daniel Sussman about the possibility of future song-pack releases, he neither confirmed nor denied that possibility, preferring instead to focus on the value of enormous library of songs that will come packaged with the game. Though he did vaguely hint at things to come (and Harmonix is known for providing tons of awesome optional add-ons), the team is mostly focused right now on delivering the best possible value proposition in the initial game.

Customization Options Are Beyond Great

But besides just jamming out to a ton of great songs, what else is there to do in the game? Well, you could spend all day customizing your character, for starters. The character designer is wildly flexible and representative, allowing for an amazing combination of possibilities – complete with a refreshing diversity in the selection of body types and gender options.

For example, my character ended up being an African-American woman with pink hair. She is dressed in all white (she and I agreed that she should be playful, but sophisticated), with a white captain’s hat and platform shoes. For good measure, she has day-glow body paint on her arms. I named her “Sparkle Motion”, and no, I do not doubt her commitment.

The customization options are so deep that you can dig down into the color of your jewellery and headphones, with some truly spectacular pattern options (corgis!). The variety is ludicrous to begin with, and many more cosmetic options will be unlocked as the game progresses.

But even further than that, players can tear into their stage presentation and select what video loops are playing on the screens behind them (corgis!), what pyro cues are used, and even the fireworks that are shot off during the set. If you, like me, enjoy fiddling with customization options, then Fuser is going to be a treat.

There Is A Game Here, Right?

And then of course, there is the actual gameplay. While freestyle mode allows you to create an endless mix, Fuser does have a full campaign mode, and it is every bit as interesting and challenging as Harmonix fans have come to expect.

When I failed the tutorial mission on my first time through, I realized that no, Fuser isn’t just a fun toy to tinker with. I needed to sit up straight and try to build some skills. If you think that Harmonix’ DJ game is going to be a cakewalk, well, I’m afraid that you are in for a rude awakening.

The player starts with a crate of tunes, selected by the game. As the levels progress, people in the crowd shout out requests, and a promoter-type off stage offers tips as to how to achieve the appropriate mix to keep the crowd involved. Players must try to shut out all the noise and excitement of the simulated show, and focus on finding the correct songs to keep the crowd happy (audience enjoyment is communicated via a very harsh and judgmental meter – these people hate my propensity to leave DMX on for the entire show).

Requests show up in a UI feed, with a short time limit to try to locate the track you are looking for and slide it into place before the clock expires. But the real challenge in Fuser comes from the timing of when you drop your selection into the mix.

A meter helps you keep track of where the downbeat is when the music is playing, but you can’t just jam your finger on the appropriate button as the meter hits four. No, you have to learn some timing, hitting the button somewhere between the two and three, so the track actually arrives and starts playing on the four. Like all Harmonix games, this mechanic will challenge your ability to ride the music.

This is further complicated as the game progresses, and Fuser eventually allows players to create their own instrumental loops to drop into the mix. The software will take care of making sure everything players create is in the correct key, but the timing is all up to them. Nothing is going to kill a track faster than dropping in some whack-ass loop over an otherwise great groove.

Harmonix games have often made players feel like they were learning an instrument, pushing their rhythmic skills to the limit. Fuser will not be any different, and players can expect to spend some time practising to increase their skills to an acceptable level. Even Freestyle mode will require a bit of work unless you want your tracks to step all over each other and sound terrible.

There is an art to DJing, and even more so to create mashups. You want to let a verse play out, allow a musical phrase to finish, and drop in a change where it makes sense. This is something you feel, and if you don’t feel it initially, you are going to have to learn to feel it.

Harmonix is known for putting extra time and care into their games, making sure everything is perfect before it is unleashed on the world. Fuser seems no different. We’ve only seen two levels of Fuser with a small representation of the music that will be included in the final game, but we can already tell that this game will be up to Harmonix’ standards. Fans expectations for the brand will be met.

If you’ve ever been at a party where someone breaks out Rock Band, you know the feeling of either astounding or being astounded by players skills with Harmonix games. Fuser looks to be no different. Get it early, and practice a lot, and you can be the one blowing people’s minds at a party with a video game.