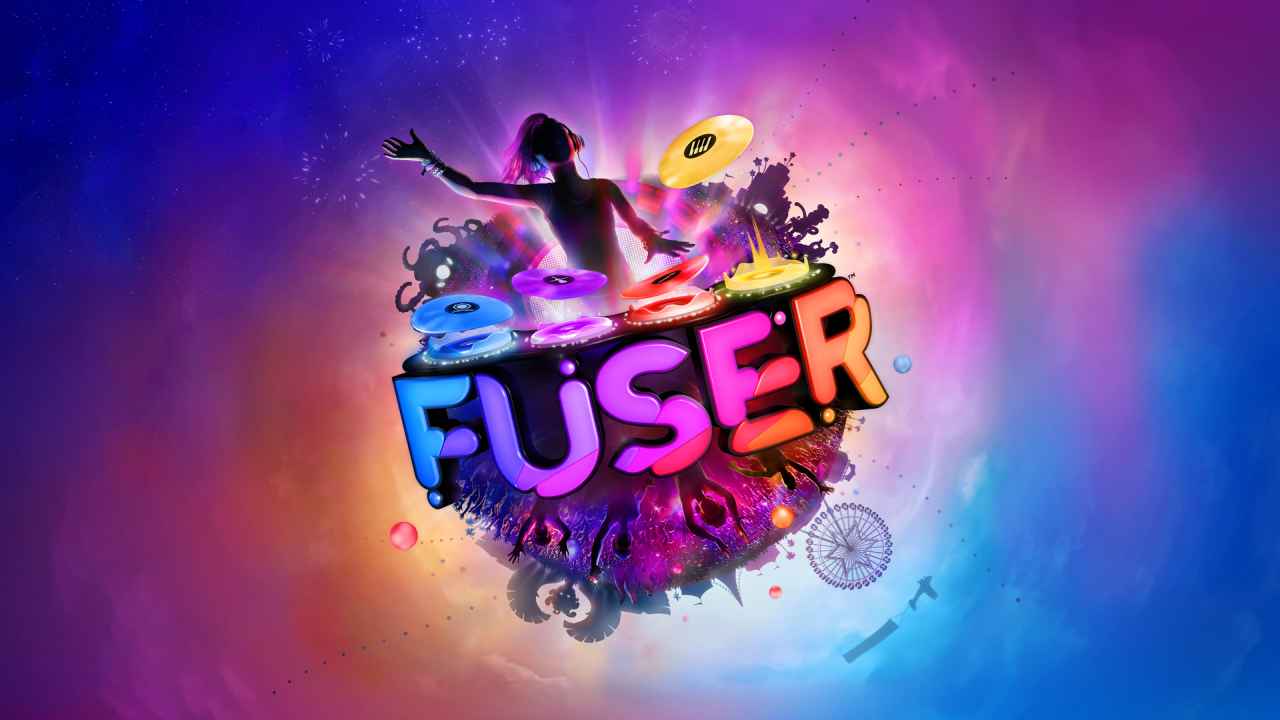 Fuser PS4 Review – Every performer knows the moment. The moment when competence combines with inspiration and a simple performance elevates to something almost divine. The moment when your brain turns off and the music just flows through you like electricity through a conduit. The moment when you leave your body entirely, and muscle memory and the spirits of the universe take over, and nothing can go wrong. The moment when it’s all just working – and you aren’t even trying.

Gamers know that feeling too. The flow state you enter when you are on a really good run – when your Pac-Man simply can’t be caught, when your little guy successfully dodges every robot in Robotron, when you know – beyond any doubt – that your pinball will absolutely not go down the drain. When your brain turns off, and something else starts guiding your hands. People that get really good at Fuser are going to know that moment, and the rest of us are going to watch in awe. The lucky thing is, anyone can get good at Fuser.

Fuser Allows The Music To Flow Through You

There are moments in Fuser when these moments become reality. Flip a beat at just the right moment. Drop a lyric, right where it catches a certain fortuitous turn of phrase. Slap pieces from four different songs together in such a way that it sounds as though this is the way the song should have been in the first place. Think to yourself, “I am a golden god of music!”. And thank Harmonix for providing you the staircase to ascend to those heights.

Fuser’s UI is so good that experienced players are going to be able to milk some astounding performances from it. Much the way that watching a Guitar Hero virtuoso was impressive, Fuser players are going to be able to entertain at parties, taking over a room and unleashing concert-worthy performances from a DualShock (or DualSense, I suppose) controller. This is a game that screams for a good headset – and a great, thumping sound system to match it.

Fuser does an amazing job of teaching players how to get in touch with their inner DJ. The game’s campaign is broken up into six sections, each of which is supervised by a fun (usually weird) promotor/mentor. As you work through each of the sections’ six “sets”, your lively mentor will teach you new tricks and functions, building on what came before.

Fuser Teaches Players As They Progress

At first, you will simply be learning how to lay down records. You have four turntables before you and an enormous crate of familiar hits to pull from. Each song is typically broken down into drums, bass, guitar (or turntable, or horns), and vocals. The early game sees players simply taking sections from various songs, mixing them together, and seeing how they sound. The game prompts the player with timed suggestions from your promoter and requests from the crowd. Responding quickly leads to a better overall score, which leads to levelling up and better cosmetic unlockables.

Gradually, the game adds more and more concepts. Soon, you will be shifting the key of the entire composition, changing the speed of your mix, laying down effects on tracks, cueing up records to drop at key moments. An orchestra’s worth of electronic instruments are slowly doled out, allowing players to create their own loops. As you play through the campaign, the complexity of Fuser slowly builds – but at such an even, measured pace that you will never be overwhelmed. Each new concept is expertly taught – one at a time, and with plenty of practice – so that by the time you move on to the next level, using it will be second nature.

My early experiences with beta versions of Fuser had me believing that I was terrible at it, but it turns out that my controller was the problem (no, for real). This full release contains an interface to configure your controller for the best response, and I highly recommend taking advantage of that feature. For me, it made all the difference in the world, and I was soon dropping beats right on cue.

Each “set” is rated on a five-star system. My personal goal was to stumble through a set with at least three stars – not an unachievable benchmark. But I was astounded after playing for a few hours when I decided to loop back around to the early sections of the game and started knocking five-star performances out of the park. It is a testament to Fuser’s designers that they are able to take a chump like me and instil in me a modicum of competence.

As you progress through the game, more and more stuff unlocks to allow you to customize your experience. Players are able to design some really fun and appropriately wild DJ characters, and Fuser continuously rewards you with more clothes and costumes to keep your look fresh. Much like the culture that spawned the game, Fuser smashes boundaries, allowing for an enormous amount of representation and diversity. You wanna put a beard on your lady? Fuser is here for it! This makes for some really fun results when you click the “Randomize Look” button.

But, beyond the look of your DJ, Fuser lets players dig deep into their stage show, customizing the stage used, the time of day, the fireworks and pyro, the color of your lasers, the objects being thrown around by the crowd – the list goes on and on. Some of these options can be purchased with in-game currency, but many of them must be earned by levelling up – giving players motivation to continue progressing even after the campaign is complete.

Multiplayer Keeps The Game Alive After The Campaign

Fuser’s campaign is no slouch – I would guess that it took me about ten hours to get through it, not counting times that I went back to replay early levels. There is a lot of content here for players to enjoy. But the campaign is just a training ground. Tons of multiplayer options are available for players to hop into once the campaign is complete (or before, if you a masochist).

A social hub keeps things lively with contests, allowing players to submit mixes adhering to certain criteria (your best mix using only 90’s hip hop, for example). The community votes on submissions, with the winner getting an in-game prize and bragging rights. Beyond that, players can simply share mixes on the hub for the fun of it. Browsing around these mixes and finding stand-outs (the good, the awful, and the bizarre) can be a lot of fun.

But the real meat of multiplayer can be found in the Competitive Mix and Battle modes. In the first, up to four players can participate, with eight more watching and waiting to hop in when somebody leaves. One player creates a mix, which is then handed to the next, who can add in whatever elements they wish. Players better move quickly, because once a ticking meter counts down, the mix moves on, whether they are ready or not. Observers make requests and offer up reaction emojis, contributing to a player’s final score.

Battle mode is a more traditional one vs. one competitive mode, with both players responding to on-screen prompts and fighting for domination in an ongoing mix. Dropping tracks correctly and not repeating yourself are important ways to score points and remove energy from your opponent, and the best two out of three wins the round (but the loser still gets a healthy dollop of XP).

Like the rest of Fuser, these multiplayer modes are bathed in good cheer, bright colors, and flashing neon. And much like the campaign, multiplayer allows for moments of sublime inspiration and crashing failure. It is all up the player, their skills, and their willingness to practice and get good. But even players with less skill will be able to jump in and drop some cool stuff into the mix. The nice thing about Fuser is that even the most basic of skills can sound pretty good.

Harmonix Has The Good Stuff Here

I’ll cut right to the chase. I unabashedly love Fuser. I’m a fan of mash-up mixes. I’m a fan of DJ culture. I’m a fan of Harmonix, and I loved their previous effort in this realm, the Dropmix musical card game. It’s like this game was made for me.

But I feel that way because this game was made for everyone. I am not a successful music game guy. My skill level at stuff like Guitar Hero, Rock Band and Amplitude is “acceptable but sucky”. But I can play Fuser, and I can create some pretty great-sounding mixes. That is not due to my skills, but rather it is a testament to just how well this game is designed.

I won’t lie, I played the hell out of Fuser during this past election week in the U.S., because I don’t drink anymore and Fuser seems to be the next best thing for distracting me from the nightmare news cycle. My house has been vibrating with dance beats for the better part of a week and my mood is about ten shades lighter than it would have been otherwise.

Harmonix has created a game using a recipe of color and music, and the result is pure fun and happiness. In this time of social distancing, Fuser is able to simulate going to a show remarkably well. Better still, Fuser allows players to feel like they are performing in a show, which is one of the best feelings on the planet. It’s almost as though Harmonix said “What is the very best feeling on earth?” and then gamified that feeling. Fuser is joyous, and I highly recommend you experience it for yourself.

With a huge variety of music, an amazing UI interface, and enough content to keep you happily bobbing your head for days, Fuser is one of the best music games ever made. Even those with no musical skill will enjoy learning how to create great sounding mixes in Fuser, and the game gives them plenty of leeway to practice. Fuser is a burst of happiness, light, and live music, all of which are sorely needed in the world right now. The highest recommendation.