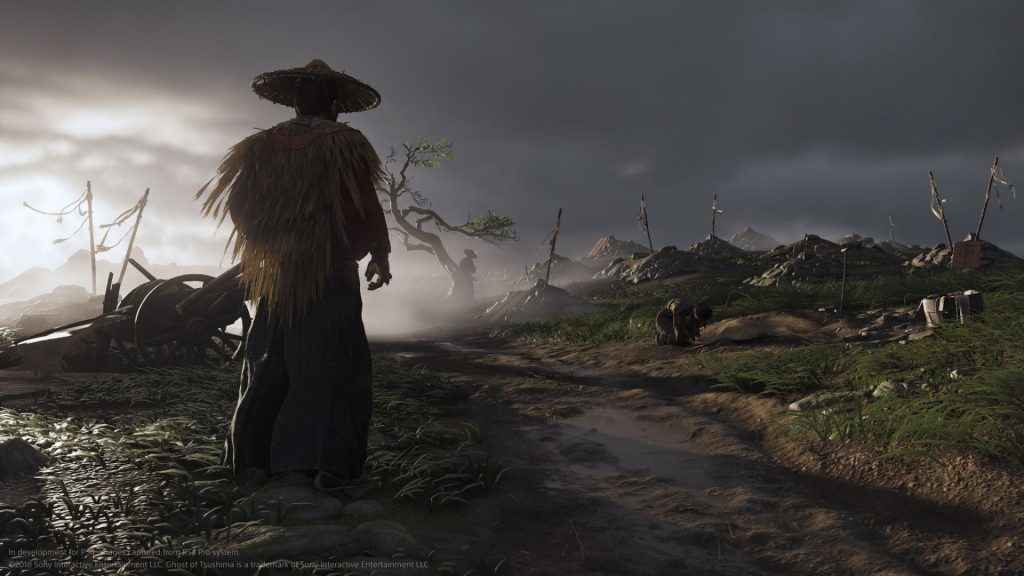 Accounting for one quarter of the tent-pole exclusives that Sony showed off during its E3 2018 conference, it’s fair to say that Ghost of Tsushima was something of an unknown quantity going into this year’s PlayStation showcase event. Some nearly nine minutes after the gameplay video had drawn to a close, one thing was absolutely clear – Ghost of Tsushima is the samurai game, or rather, samurai epic, that we’ve been wanting for years.

Ghost of Tsushima – A Real Samurai Epic At Last

Immediately the footage makes one thing obvious – Jin, the main protagonist of Ghost of Tsushima is already nine days deep into his resistance of the Mongol Invasion and this suggests that we’ll see the conflict play out over an extended period to time (the Mongols actually invaded Japan twice, first in 1274 and then again in 1281), thus lending the game a real sense of epic scope and breadth that Samurai games are rarely afforded.

Of course, the other thing straight away smacks you in the face with all the force of a katana scabbard being rammed into your skull is just how eye-searingly gorgeous Ghost of Tsushima looks. Despite following on the heels of the absolutely sublime looking The Last of Us Part II, Ghost of Tsushima boasts a level of visual fidelity that would make even God of War blush, with sweeping spectacle that takes in hugely detailed vistas, stunning lighting, superb animation and an extremely high level of character detail throughout.

As to the extent to which we can explore the sprawling rural spaces of 12th century Japan, things aren’t quite so clear at this juncture. Certainly on initial glimpse Ghost of Tsushima would seem to afford the player a degree of freedom comparable with The Witcher III, as the landscape stretches out from under your feet and over the horizon as our hero and his trusty steed Nobou, traverse the picturesque terrain at speed.

It would also seem that such a degree of freedom also extends to the presence of side quests too, as it was revealed on the Official PlayStation Blog that the entirety of the E3 2018 demo for Ghost of Tsushima was actually just one rather large side-quest rather than a chunk taken from the main story. As such, it would certainly seem that Ghost of Tsushima is shaping up to be a sizable beast and one that will likely boast a wealth of both side and main quest activities for the player to get stuck into (a fact that makes sense given the history of expansive quest structures Sucker Punch has demonstrated previously with the inFamous series of games).

Elsewhere it’s abundantly clear that Sucker Punch has religiously studied the swordsmanship of Samurai from this era. With an emphasis on deadly counterattacks by way of a fighting style that we now call ‘Iaijutsu’ (a combative quick-draw sword technique that can end the fight in a single stroke), combat in Ghost of Tsushima looks every part how one would expect swordsmanship to appear from that period of time, as Jin can parry, evade and strike his opponents down with eye-opening brutality and equal grace.

Though barely nine minutes of gameplay from Ghost of Tsushima has been revealed, it’s prospects already seem lofty. The first truly epic open-world action RPG on PlayStation with 12th century Japan as its setting, the latest labor of love from Sucker Punch looks to be not just its best yet, but also a legitimately robust contender for one of the most anticipated titles in recent memory.

Much like the seemingly limitless horizons and the romanticized cherry blossom saturated expanses of Feudal Japan then, Ghost of Tsushima boasts a bounty of promise that I for one cannot wait to see fulfilled. Quite simply, this is the gaming equivalent of rarefied air and I cannot wait to savor every single breath.

Though a release date for Ghost of Tsushima has yet to be made official, you can check out the current selection of PS4 exclusive titles in our handy ongoing feature.