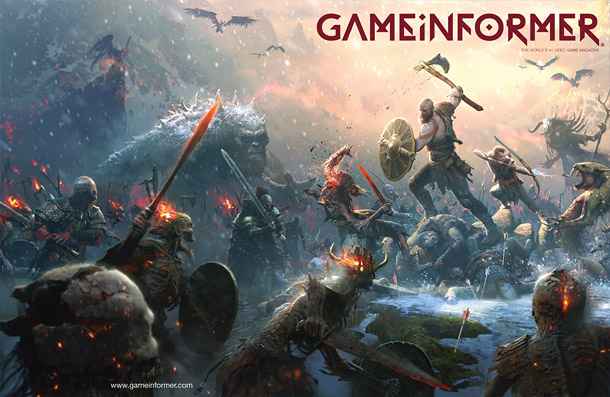 It looks like we have a fresh glut of new God of War information. Game Informer revealed that Kratos’ Norse Massacre Adventure is the magazine’s February cover game. Oh, and they showed off the rather spiffing cover art and some tasty screens too! Not to mention a few new details about the game itself. The release date is noted as a tentative ‘Early 2018’. So nothing new on when we actually get to play it.

There’s a lot we still don’t know about Sony Santa Monica’s game. The trailer’s revealed the Norse setting, and introduced us to a bearded Kratos and his not-so-bearded son. Yet thank’s to Game Informer’s visit to Sony Santa Monica, we’re about to learn a lot more.

Firstly. Here’s a look at some of the screenshots from Game Informer that show Kratos taking the fight to some of the beastly baddies he’ll meet on his travels. He’s also getting an arrow-based assist from his son! Bless them! In the announcement, Game Informer’s Joe Juba states ‘For our February cover story, we visited Santa Monica Studio to play God of War ourselves, diving into the combat to see how Kratos' new array of gear and abilities change the battlefield. We interviewed the team about reimagining the God of War formula, bringing players closer to the action, and how Kratos' relationship with his son manifests in gameplay. Whether you're a newcomer to the series or an old fan, you'll want to learn all about this epic journey through Norse mythology.’

So far we’ve gleaned the following information about how the game plays. (Credit to ResetEra member WordsintheWater for the summation)

Sounds pretty tasty, right? You can take a gander at the magazine cover below. The print issue will arrive in the next few days for subscribers. The digital version is currently available.