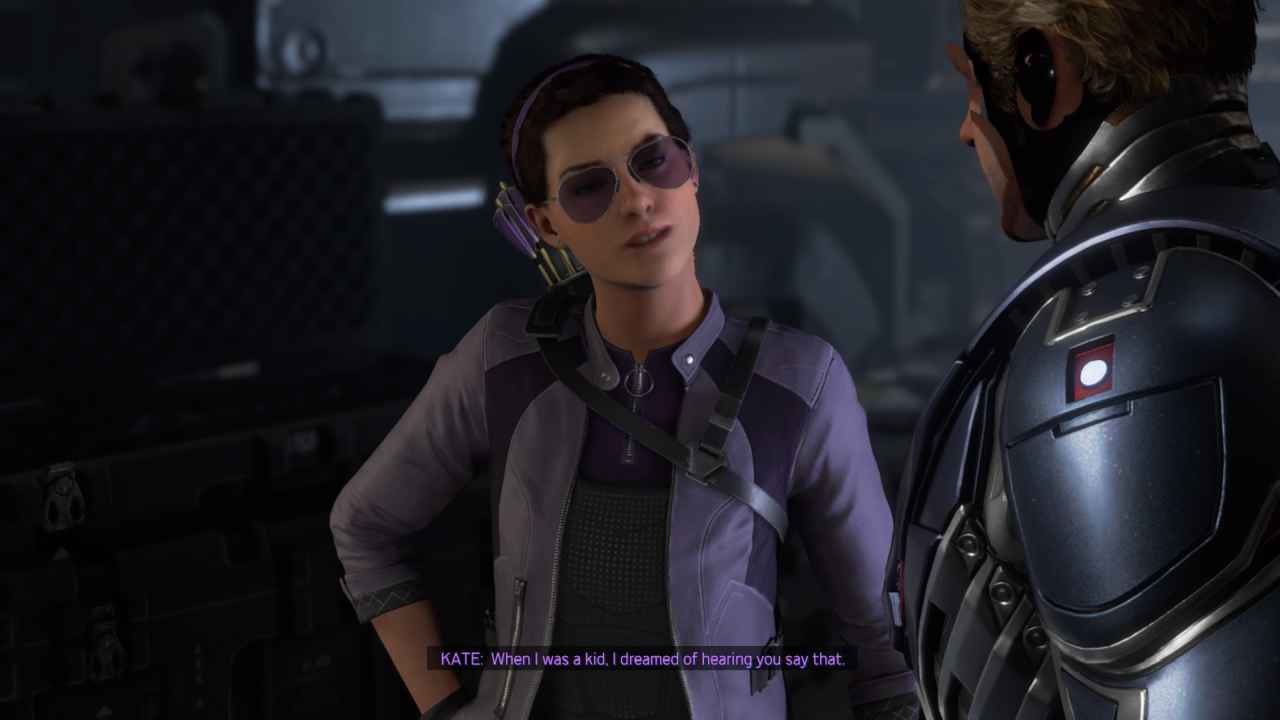 Marvel’s Avengers Kate Bishop Content Hands-On – My trajectory with Marvel’s Avengers mirrors that of most of the gaming community. I found the campaign to be extremely fun and well-written. I enjoyed the unique ways that each character handled, and the care that was taken to make each hero feel unique. I bounced around the endgame content for a couple of weeks – mostly with Hulk – before realizing that I was doing the same stuff over and over again. Other games took my attention, and I meandered away, figuring that I would bounce back to Avengers when new content dropped.

After several delays, Marvel’s first batch of new content has arrived. Kate Bishop – also known as Hawkeye (but not that Hawkeye) – returns to the Avengers fold for the first time since A-Day, determined to shake things up. Having a new, lesser-known hero to play with feels great, and running around as Kate feels fresh and fun, right up until the point that Marvel’s Avengers’ bugs start rearing their heads.

Kate Bishop Is A Great Addition To The Team

Having played through Kate Bishop’s initial quest line, I can see why the folks at Crystal Dynamics chose to lead with her as the first add-on character to the initial six. Lesser-known than her mentor Clint, Kate comes storming into the story like a force of nature – all whirling action and lightning-fast wit. Even Tony Stark seems slightly rocked back on his heels by Kate’s unwillingness to defer to him – her jabs are so sharp he is sometimes left grinning and speechless.

Kate never stopped superhero-ing after A-Day, and one gets the impression that she is disappointed in the rest of the team for “spending the last five years playing air guitar”. The rest of the Avengers run across Kate while investigating temporal disturbances, and find her aiming her one-woman wrecking ball tactics in the same direction as them. They decide to team up – after Kate puts everyone properly in their place – and before long, the younger Hawkeye is back on the team.

I don’t want to give the impression that Kate is contentious with the rest of the team. But there is a familiarity there that perhaps the others have misplaced – Kate has their number, and they are surprised to see that this person they remembered as a little kid has become a very strong woman. It’s a great dynamic that really stirs the Avengers’ pot, making the old seem new again – for a time.

Kate’s Powerset May Be The Best In The Game

If the addition of Kate Bishop to the Avengers is any indication of how new heroes will change the play dynamics in Marvel’s Avengers, I am totally here for it. Crystal Dynamics needs to turn the crank up to 11 and start adding some more folks in, because this new addition is wicked fun to play. Having spent a few hours with Kate, I’m not going back to Hulk anytime soon (sorry, big guy).

Kate’s powerset is wildly varied, allowing her to function as both a ranged sharpshooter and a melee powerhouse. It’s not wise to take her wading into the middle of one of Avenger’s more framerate-slowing pile-ons, but she can do some serious damage by skirting the edges of the fracas and picking off dudes from afar. I opened almost every battle by getting Kate to some high ground, and snipping those damn flying robots off the field, along with taking down any turrets before they even realized my team was there.

Kate has a great traversal ability, bamf-ing around the battlefield like a purple Nightcrawler. This is great for getting up to higher levels quickly, and skating through heavily populated battlefields without taking a hit. In close quarters, Kate pulls out her samurai sword and starts cleaving away, and alternating between the sword and bow can be done so quickly that they might as well be the same weapon. As you unlock powers by leveling up, Kate adds great stuff to her arsenal – unleashing stun and concussive arrows into the middle of a throng of baddies can quicky turn the tide of battle.

Kate can be played as a ranged shooter, a (somewhat fragile) melee fighter, or as a crowd control utility character. This versatility had me changing her role on the fly, adapting to situations as they arose. Unlike my beloved Hulk, who, um…smashes, playing as Kate kept me thinking and engaged the entire time. This is a great character, and a smart addition to Marvel’s Avengers.

What Was Old Is…Still Kinda Old

Beyond the great ne character to play as, the new content in the Kate Bishop add-on is a mixed bag. Anyone expecting the set pieces and production value of the campaign to make a return is going to be sorely disappointed. Instead, much of the content in Kate’s campaign consists of a few conversational cut scenes and a lot of in-game dialogue. Marvel’s Avengers players will instantly recognize a lot of the dynamics at play in this mini-campaign, and may be disappointed to be running the same old missions again.

You will find yourself defending points against incursion, battling that same old giant warbot, taking a lot of rides in familiar elevators, and doing one of those dreaded vault-unlock missions (which absolutely suck when you are trying to do them single player). Though a brand-new story plays out within these missions, the general structure of things will be very familiar, which puts a slight damper on the fun.

There is a new Shield base to explore, and Dum Dum Dugan makes a welcome appearance – so it feels like Marvel’s Avengers universe is expanding ever so slightly. But for the most part, the pleasures in this new content are the ability to play familiar levels in new ways, rather than being provided with completely new levels. I sure would love to see Avengers break away from AIM in general, to be honest. Robots are cool and all, but I wanna go beat up some chumps on a tropical island or something. Wishful thinking, I suppose.

Marvel’s Avengers’ Bugs Are Back

The addition of Kate Bishop comes at a price, and it is a sharp one indeed. After months of cleaning up Marvel’s Avengers and making it more playable, Crystal Dynamics seems to be starting from scratch with the addition of this new content. Bad framerates, indecipherable battle fields, disappearing textures, and outright game-breaking bugs all make an unwelcome return – with proves the Crystal Dynamics was correct in delaying this release, and maybe should have delayed it a bit longer.

Graphically, the new Kate Bishop missions add a lot of cool visual filters and effects – which would be really neat if my base PS4 could handle them (or if the PS5 patch were ready to roll). I can totally see the story reasons why these effects were added to the game – and they are very cool – but they leave my poor PS4, which could barely handle the game as it was, panting for breath and begging for mercy. This is a game that absolutely needs to transition to next-gen, as quickly as possible.

Other bugs are minor enough to cause a mixture of amusement and frustration, but I did experience one mishap that reminded me of what Avengers played like in the preview days before it was officially released – and the anger that I felt was anything but amusing.

In the final, climactic battle of the mission chain, Kate Bishop went down and had to be revived by a teammate. When she came back, her health bar was completely empty. She could damage enemies, but could not receive damage or grab any pick-ups that were falling off of them. When the fight concluded, a brief loading icon appeared, followed by a blank screen that never resolved into anything. I eventually crashed the game and had to restart the entire 90-minute mission – the longest mission in the DLC.

I’m not one to bag on developers for bugs – it happens, and this is a clearly a complicated game. But when stuff like this happens, it leaves a sour taste in players’ mouths for what was otherwise a pretty fun experience. I experienced bugs of this nature in the pre-release build of Avengers, but it was cleaned up pretty quickly after release. But this content is out in the wild, making me wonder what bugs other players are seeing.

Should I Redownload Marvel’s Avengers To Play As Kate Bishop

Which leads to the big question – is the Kate Bishop content worth taking another swing at Avengers after bailing on it? Your mileage with the original game may be different from mine, but for me, the answer is yes – with a caveat to maybe wait a week for so for some much-needed patching to be done. And returning players should keep in mind that plenty of games create new bugs when they add content – Avengers is not unique in this regard.

Kate Bishop is a fun new character, and the content created around her gives me hope for future character releases – for as long as Crystal Dynamics decided the return is worth the investment. As long as they keep adding fun folks to play as, I’ll probably keep showing up for it. We’re surely at least going to get Hawkeye and Spider-Man before they pull the plug, right?

Kate Bishop changed the way that I play Marvel’s Avengers, and I really enjoy her snappy attitude and diverse power set. So long as the structure of the game doesn’t collapse under the weight of new characters, I hope that Crystal Dynamics continues adding more stuff to Avengers. Will this Kate Bishop content revive the game? Maybe not, but it certainly makes it fun to play again – even if just for a while.

Marvel’s Avengers from Square-Enix and Crystal Dynamics is out now on PS4.