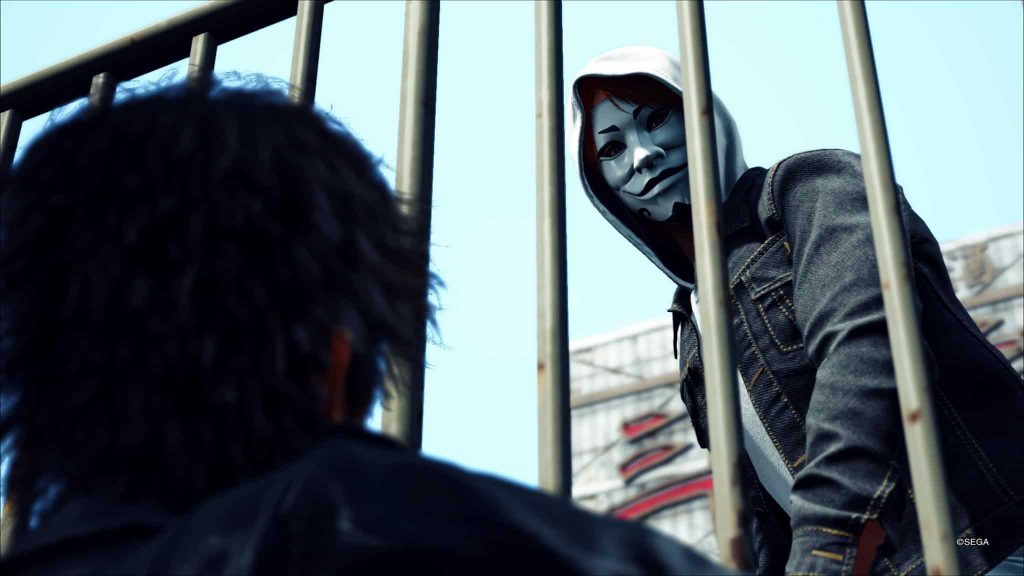 If the first 15 hours of Judgment taught me anything, it’s that it isn’t quite Yakuza 7 (there’s already a game for that), and neither is it something that is completely divorced from the franchise that Kazuma Kiryu built either.

Judgment’s somewhat duplicitous identity is reflected well in its protagonist, Takayuki Yagami. A private investigator whose promising career as a lawyer is derailed after a killer that he helps walk free re-offends with gruesome and terrifying results, Yagami now finds himself dallying with Yakuza and other unsavory types in order to pay the bills – the righteousness of his conviction nowhere near as strong as it once was.

From the off, Judgment is keen to let you know that it isn’t just another Yakuza game. Indeed, the opening act of the game (as previously covered in our hands-on impressions of the Japanese demo released last year), immerses players in the new stealth sequences, drone reconnaissance and on-foot chase sequences (seen in the earlier PS3 era titles) in order to definitively let you know that there is more to Judgment than meets the eye.

If that wasn’t enough, Judgment also brings multi-branching dialogue to the series for the first time and the ability to examine details at a crime scene, CCTV footage and present evidence – all of which make Judgment feel different from the mainline Yakuza games. Though people like to compare Judgment with Capcom’s superb Ace Attorney series of games (the presenting of evidence seems an obvious similarity) the comparison is a touch exaggerated – given that once the legal proceedings kick off in court the player has no real way of influencing the proceedings at the time.

Again, at this point I’m just over 15 hours into the game, so that might change later on – though the way that the systems work in Judgment suggest that Sega’s latest is more concerned with the set-up of a trial rather than allowing players to play a part in the execution of it. Nonetheless, for all the strides that Judgment makes in order to define itself as its own thing, it is still, at its heart, a Yakuza game.

Perhaps the most keenly felt reminder that the DNA of Toshiro Nagoshi’s gangster series runs through the veins of Judgment is that it takes place in a post Yakuza 6 Kamurocho, boasting all of the same landmarks, Poppo stores, arcades (having arcade perfect Fighting Vipers is a treat), pubs and restaurants that series veterans will be familiar with. Likewise, Yagami can take on a range of side-quests (or side cases, as they’re called here) which also embody the series penchant for straddling the po-faced and absurdist tonal divide.

Though Judgment adheres to the Yakuza template, it does so in a range of new and interesting ways. Take the side cases for example – rather than just being found littered around the map and spawning anew as each chapter in the story is cleared, Yagami must first befriend the denizens of Kamurocho and increase his reputation within the city before folks come knocking with cases for him to tackle.

And, somewhat predictably, these side cases are a riot – ranging from tracking down and halting a trio of perverts to cracking a cipher in order to open a safe to score an indie book publisher a lucrative deal, Judgment provides an ample variety of entertaining stuff to get stuck into outside of its main story scenario. Further afield, combat has also seen some meaningful changes too.

Though Yagami will still run into roaming bands of assholes on the street, he handles business in an entirely different way to Yakuza’s golden boy, Kazuma Kiryu. Appearing as a hybrid of martial arts star Jet Li and Tekken’s flamboyant Capoeira practitioner Eddy Gordo, Yagami’s fighting style is not only much more concerned with kata and flow rather than fierce street brawling that was synonymous with the Yakuza games, but it also allows players to switch between Tiger and Crane forms, with the former proving superior when dealing with a single strong foe and the latter better at dealing with crowds of enemies.

There are other significant changes to how combat is handled, too. Yagami’s acrobatic nature means that he climb onto cars and run up walls in order to augment his arsenal bone-breaking moves, while the supremely savage Heat actions return as Ex moves and can be executed from just about anywhere – watching Yagami run up a wall and spring off of it into a twirling, skull-rattling kick is quite the spectacle to say the least. Elsewhere, though Yagami can improvise with weapons found on the street, he cannot carry a small armory around with him in his pocket like Yakuza protagonists Kazuma Kiryu and Goro Majima are able to do.

Finally, Judgment’s main protagonist, Yagami, is simply a joy to play. A world away from the stoic and sometimes stuffy nature of Kazuma Kiryu, Yagami is a fairly sarcastic and dryly humored sort who finds himself concerned not with avenging his Yakuza brothers or anything quite so noble as that, but rather with more mundane and relatable concerns such as having to pay rent and avoid old flames at the office. It marks a refreshing change of pace from the ultra glamorous mafia violence that has characterized the Yakuza franchise for so long.

Judgment then would seem to be the best of both worlds. Not only does it appear to effectively double up as a new entry in the Yakuza series to satiate the appetite of franchise fans, but it also resolutely stakes out territory of its own too; crafting a much more methodical tale while also giving players a highly engaging protagonist in Takayuki Yagami. Throw in some superb visuals and the ability to switch between the original Japanese language and a surprisingly accomplished English dub, and it’s becoming clear that Judgment is shaping up to be one of the most essential PS4 games of the year.

Look for our full Judgment review in just a couple of weeks!