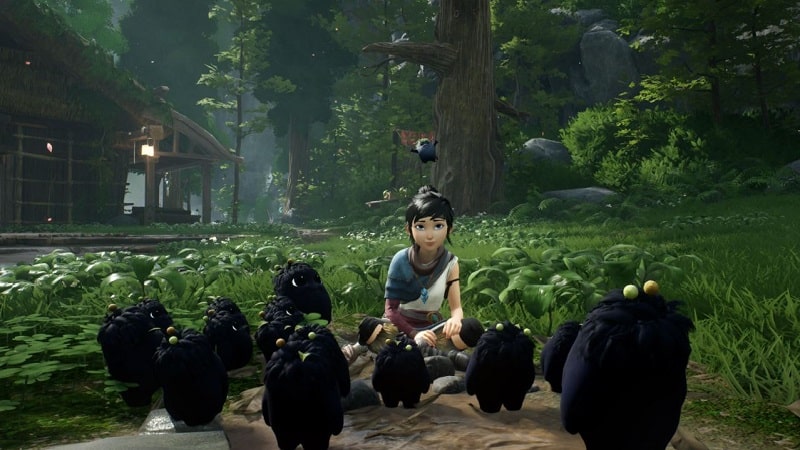 Kena: Bridge Of Spirits hands on PS5 preview. Let’s get something out of the way first. YES, Kena: Bridge of Spirits does look every bit as good now as it did when it was first revealed back in 2020. This is one game that most assuredly has not suffered at all from the downgrade culture that has affected other titles, but more on that in a bit.

For those who are unsure exactly what type of game Kena: Bridge of Spirits is, allow me to put your mind at rest. After spending a good hour with a recent PS5 build of the game, I can definitively confirm that Ember Lab’s debut effort is an action RPG that bears a striking visual and functional similarity to Nintendo’s Legend of Zelda games, as it neatly intertwines platforming, combat and progression against the backdrop of an overarching fantasy narrative.

Seemingly taking place near the beginning of the game, the demo has players trying to locate a troubled spirit called Taro who has succumbed to a virulent corruption that is tearing through the land. In taking a little more influence from The Legend of Zelda (and the beloved Majora’s Mask specifically), Kena can pick up the masks of other individuals and use them to see into the past of those folks via a handy series of flashbacks. Beyond being able to peek into the past, such masks also be used to spot objects of importance lurking in the world in addition to pointing out where pockets of hidden Rot exist. 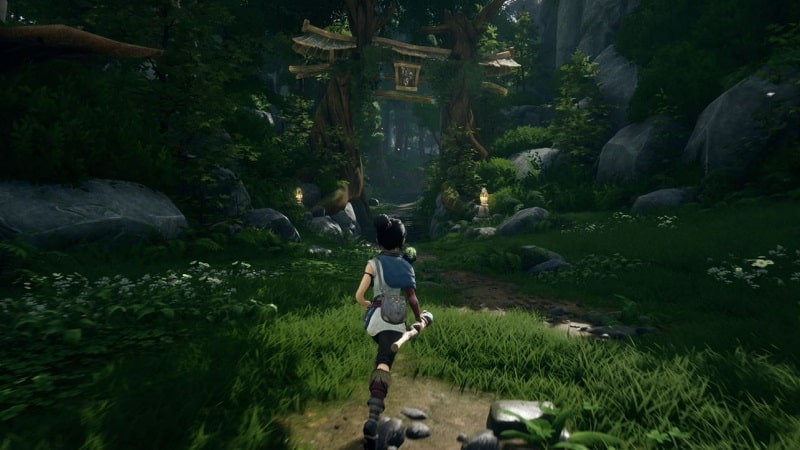 Now, don’t get it twisted – despite the less than flattering moniker, the Rot are actually the good guys (or so it seems) and take the physical appearance of bouncy little helpers cloaked in obsidian that don’t look at all dissimilar from the Sootlings seen in Miyazaki’s Studio Ghibli animated masterpiece, Spirited Away. Sporting much more than just a cute façade, the Rot are a bunch of a bouncy companions that have a wide array of utility that Kena can leverage in order to help her progress through the game world.

Hopping around like little shrouded, legless pygmies that are amped up on sugar, the Rot can act as a second pair of eyes and ears for Kena; usefully detecting items and other collectibles in the environment that our heroine might otherwise miss. More than that, they can also be used to destroy enemy spawn points and the numerous corrupted gates that bar Kena’s path.

Where things get a little tricky, is that enemies scare the Rot and only by attacking them can Kena regain Courage to summon them back. Once returned in the heat of battle, the Rot can be deployed to heal Kena and bind enemies, adding some additional strategy to the proceedings. 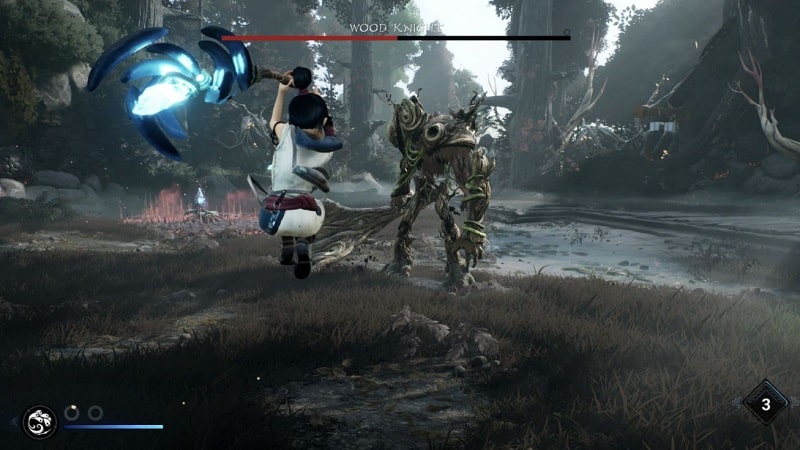 Certainly then, when it comes to the combat side of things, the proceedings should prove familiar to anyone who has spent time with the 3D Zelda games and the many third person actioners that have been influenced by them. Kena has light attacks, heavy attacks, can roll away from danger and can also employ a shield bubble too to defend against direct attacks.

Sure enough, the combat doesn’t feel especially revolutionary, but it nails the fundamentals and is smooth, fluid and satisfying, with Kena able to link up combos and evade enemies at split-second notice with delightful responsiveness and aplomb. The merits of Kena’s combat system are perhaps best evidenced during the boss fights whereupon our protagonist isn’t just fighting a single big bad, but a variety of smaller mobs too that each boast their own abilities (shield bearers that can’t be attacked from the front, big damage dealing enemies and so on), and here it does a great job of making you feel properly capable.

Kena: Bridge Of Spirits Does Feel Familiar In Many Ways, Yet Its Wealth Of Charm Proves Impossible To Ignore

Then there are the puzzles. Hardly heavyweight in nature (though again, this was an early demo), Kena’s puzzles tend to be fairly straightforward conundrums which have her directing the Rot to move and position elements in the game world in order to proceed. In one example, Kena must direct the Rot to move a pile of resonating crystals into range of other crystals, allowing her to trigger a sonic cadence that hits all the crystals and thus opens the door, allowing her to continue. It’s nothing ground-breaking, but hopefully it points to a level of puzzle design that evolves as you go through the final game. 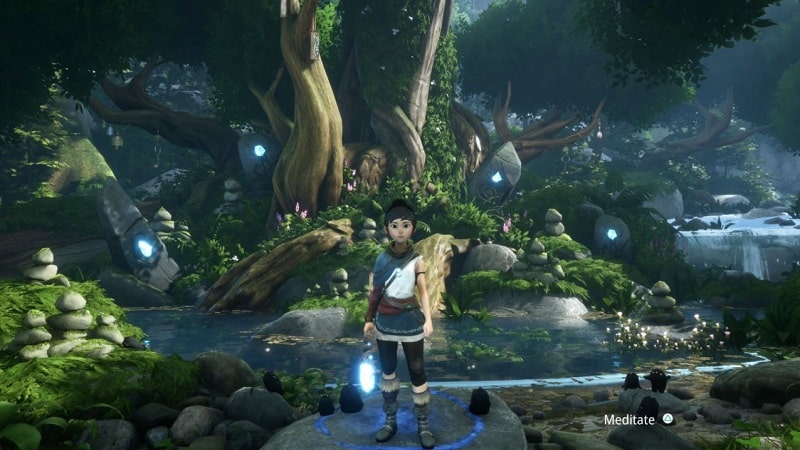 When Kena isn’t bopping nasty forest beasties on the skull or solving puzzles, she’ll be spending a fair amount of her time exploring and traversing the gorgeous forest that she finds herself in. Traversal is simplistic but also gratifying with Kena mantling up onto most flat edged surfaces, while a sprint and handy double jump ability allow her to reach places she wouldn’t normally be able to. Finally, Kena can shimmy her way around ledges in ways that again, will be familiar to anyone who has played a 3D action adventure in the last ten years.

Now don’t get me wrong, though the fashion in which Kena engages with combat, puzzle solving and platforming doesn’t appear especially fresh by itself based on the evidence of this early demo, the world in which you’re doing all of this does and truly speaks to the depths of the partnership that developer Ember Lab has with Vietnamese animation studio Sparx. Kena: Bridge of Spirits is absolutely oozing Asian folklore wonder and mystique and looks set to provide gamers with a thoroughly unique setting to adventure around in.

Much like recent PS5 exclusive Ratchet & Clank: Rift Apart, Kena: Bridge of Spirits takes yet another step down the path of narrowing the gulf that exists between CG movies and videogames. Seemingly running at 4K and 60 frames per second, it’s actually the visual style that shines through here, as Kena: Bridge of Spirits strikes an impressive profile as one of the most gorgeous PS5 games to date. 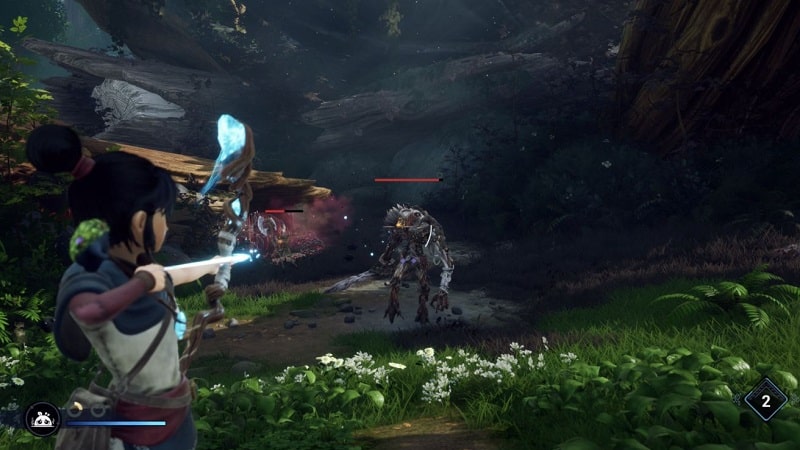 The character design and animation in Kena: Bridge of Spirits is simply breath-taking and riven with the sort of nuanced characterisations that you would expect from a Pixar movie. Whether it’s Kena herself display a full range of motion and facial expression that you just don’t see in other games, reacting in palpable fear in one moment and astonishment the next, the tremendous lighting work which spontaneously illuminates the environment in bursts of vibrant colour or quite simply just the sun dappled, leafy forest paradise that Ember Lab have fashioned, it’s easy to fall head over heels in love with Kena: Bridge of Spirits.

As a direct result of its innate beauty, the world in Kena: Bridge of Spirits certainly feels like one that you want to explore, with ample number of secrets dotted around the environment to reward those who put the time in, not to mention handy spirit shrines that essentially serve as a fast travel mechanism. In terms of how the world appears to be structured, Kena: Bridge of Spirits employs a mixture of open world and linearity in so far as you have a clear objective to reach, but there are multiple areas that exist off the beaten path for you to explore.

Even in this relatively early demo, I was able to get a glimpse at how the progression system works in Kena: Bridge of Spirits, too. By defeating corrupted foes, restoring portions of the environment and discovering fruit for her Rot to eat, Kena can rack up Karma which can be used to purchase new abilities for herself such as special attacks and counters, while new Rot abilities such as a Rot Hammer that lets her Rot attack enemies at range, also become available later on.

Kena: Bridge of Spirits would have to put a major foot wrong on its final release to not be excellent and live up to its heady, ambitious promise. Though Ember Lab would seem to be applying an infinitely delectable Asian folklore veneer to the action RPG template here, Kena: Bridge of Spirits has some big, PS5 style exclusive vibes going on here in terms of charm and sheer production value and I’m absolutely here for it.

Impressions were taken from the PS5 version of the game.