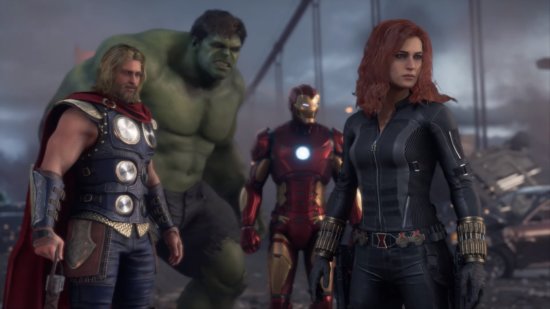 Crystal Dynamics has unveiled the Marvel’s Avengers update 1.32 patch notes for your viewing pleasure, which is now live to download across all versions of the game. This latest update adds support for tomorrow’s Tachyon Anomaly, plus a range of bug fixes for multiplayer and other modes.

Read up on the Marvel’s Avengers 1.32 patch notes below.

AIM’s tampering with time has led to periodic Tachyon Anomalies. Have more than one of the same Hero in your Strike Team and during matchmaking! Daily missions for this event reward Priority Set gear for the Hero you’re playing regardless of Level. Completing the weekly mission will reward 1 piece of gear from the Hivemind set per Hero above PL120. Each Hero below PL120 will get an Epic item instead.

The Tachyon Rift Mission: And We’re Back takes place in the city biome. Can you beat the clock?

We’re introducing Temporal Assault Nameplates which are animated nameplates you can get to add some shine to your experience. You will receive an animated team nameplate as a reward for the first completion of the weekly mission chain or daily mission that can be used on any Hero! Subsequent completions will not award more nameplates. Additional Hero-specific nameplates are available in the Marketplace.

Added two new enemy groups to the Custom/Intel HARM Room – Dreadbots and Airborne. The Dreadbot groups are waves focused on Dreadbot enemies, and the Airborne group is themed around all flying enemies.

A second Black Widow no longer appears at the War Table during the Mistaken Identity intro cutscene.

In the Hawkeyes mission, the mission’s outro no longer leaves the player on a still image for a prolonged period of time before progressing.

In The Light That Failed, activating a Major Artifact no longer causes issues in Iron Man’s flight tutorial.

Assignments no longer reset when switching between mission givers and faction terminals.

Resolved an issue on Global Presence where enemies may not spawn during multiplayer sessions.

Players can no longer go out of world on Tachyon Mission – Breakout due to rapidly flying through the map as Iron Man before parts of the environment appear.

Fixed an issue where PS5 and PS4 players did not transition successfully to the Quinjet upon War Zone completion.

Fixed an issue where players would sometimes have different NPCs at the helicarrier after matchmaking.

Fixed an issue where matchmaking could be disabled for players without their input.

Resolved an issue where a player could not join another player’s active War Zone session that they just left.

The tank prying animation on Secrets Within no longer appears broken.

Kamala’s hands no longer become erroneously gigantic when players press both a melee attack button and jump button at the same time while Embiggened.

Fixed an issue where crates and resource containers would flicker at longer distances.

Resolved multiple issues where aiming or using a ranged attack immediately before using a finisher could result in a bugged animation, inability to aim, or camera issues.

Added audio to Hawkeye Takedowns in the Marketplace in cases where there was no audio.

After defeating the Warbot in Family Reunion and watching the cinematic, the player’s HUD now properly appears.

Codex entry for the Elite Dreadbot is properly unlocked.

Fixed a rare issue where sometimes, the player would not be able to jump or fly after using a War Zone elevator.

Hawkeye’s Heroic abilities can now be activated immediately after grappling.

Fixed a rare issue where Kamala’s High Five would sometimes not fully stretch out and instead linger in front of her.

Fixed an issue where Adaptoids’ laser beams can continuously fire, despite being defeated.

Thor’s God Blast no longer knocks drones away prematurely, before Thor can finish casting the ability.

In Gathering of Evil, Abomination no longer gets stuck on the center structure.