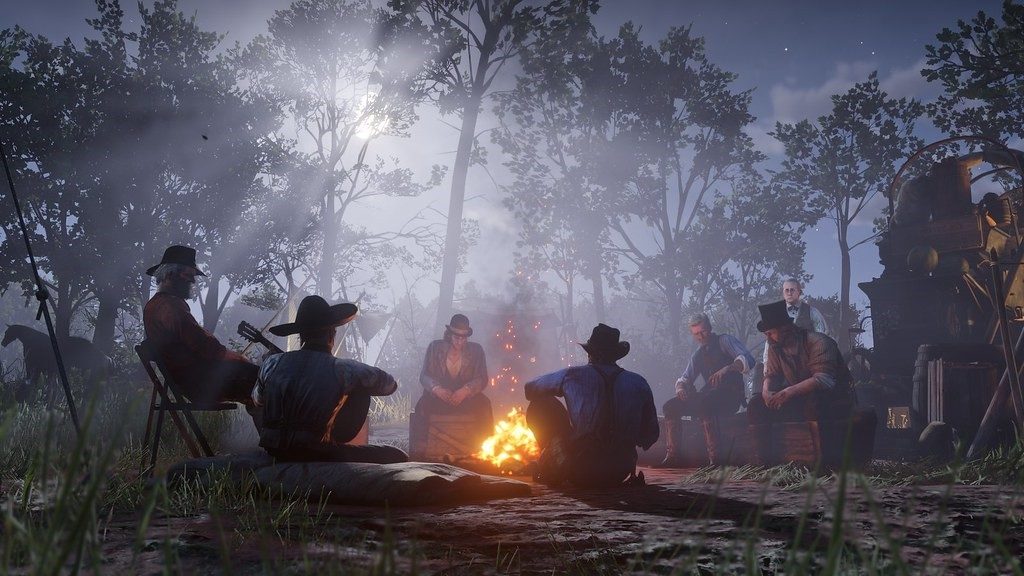 Now that Red Dead Redemption 2 has finally been released to PC, soon-to-be bandits, bank robbers, highwaymen, cattle rustlers and all other manners of knaves and villainous cowboys are diving into the beautifully detailed, richly varied and vividly engaging world that Rockstar Games spent almost a decade making. PlayStation players are seeing the game all over the internet again as huge numbers of new players are treated to the fun that they have already had! This means that now is a great time to revisit Red Dead Redemption 2 and sink into its world once again.

The game is an immersive masterpiece, fully deserving of every one of the over a hundred awards it has been given and not to mention the huge amount of money it has made for Rockstar. No one can step away after completing the game and honestly claim to have not been emotionally affected by the narrative triumph that is the captivating plot of this glorious adventure. If you’re looking to dig into the story soon and have somehow managed to avoid the numerous spoilers floating around, then fear not – this article will not mention anything to jeopardize your experience.

But considering that most players on PlayStation will have already finished the main missions of the game, this article will instead shine a light on a few of the many things to be done outside the main storyline. Whatever captivates your interest from the final days of the glorious Wild West just as it is slowly being overtaken by the industrialization of modern civilization, this game has it to offer. Whether it’s hunting buffalo in the open grassy plains, exploring out-of-the-way lakes and coves for rare fishing opportunities, gambling in the saloons and bars of the towns dotting the midwestern landscape or hunting for hidden riches and treasures, Red Dead Redemption 2 will not disappoint! 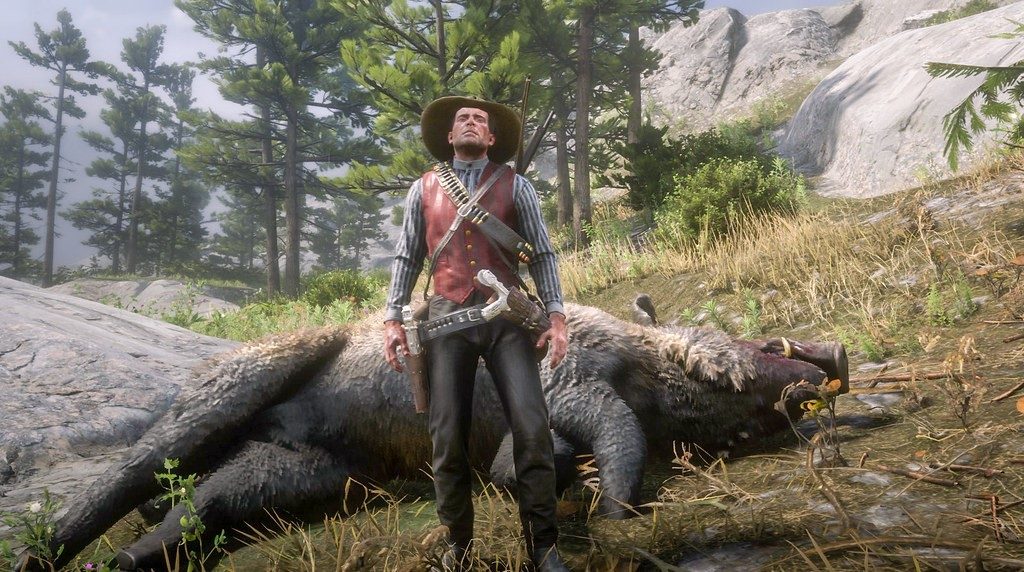 With over 170 species of animals in the game, if hunting is what catches your eye, then you are in for a treat. Hunting in Red Dead Redemption provides lots of benefits for you and your camp so it comes highly recommended. The map is divided into different regions, each featuring a different ecosystem if interacting animals of separate species. Learning where each of the animals live in the map is part of the fun for many, but for those looking for specific prey right from the start there are guides aplenty on the web (but beware that maps on such guides might give away locations otherwise awaiting your discovery as you move through the story if you haven’t yet completed it!).

The key to hunting in Red Dead Redemption 2 is selecting the right gun for the right animal. Using a too large weapon will damage the quality of the carcass, resulting in lower quality pelts and consequently less pay! And talking of pelt quality, animals themselves vary. In order to pick out the best animal from a herd, you’ll need to use your binoculars. Once you’ve found a perfect (3 star) specimen, you’ll need to make sure to kill it using as few shots as possible with a gun of the right size. The varmint rifle is ideal for rabbits, for example, whereas you’ll need something bigger if you’re going up against a bear! Check out a great hunting guide via YouTube!

Fishing only becomes available after you’ve reached a certain point in the story, where it will be obvious that you now have the equipment necessary to head out whenever you please. Until then, don’t worry about trying to find or buy a fishing pole. Like hunting, fishing requires a certain level of knowledge about the species you are trying to catch. Different baits and lures exist for different environments, so you’ll need to pick out and use the most suitable one in order to catch the biggest fish.

Hidden in the game are 13 legendary fish. These will take a real effort to catch and won’t give up without a drawn-out fight. You’ll need to head to the right location for each of these unique fish and as mentioned above make sure you have the right kind of lure. But remember that fishing is meant to be a relaxing pastime, so don’t rush off to catch all the biggest ones straight away. Make sure to spend time absorbing the gorgeous atmosphere provided by the game and take it easy! 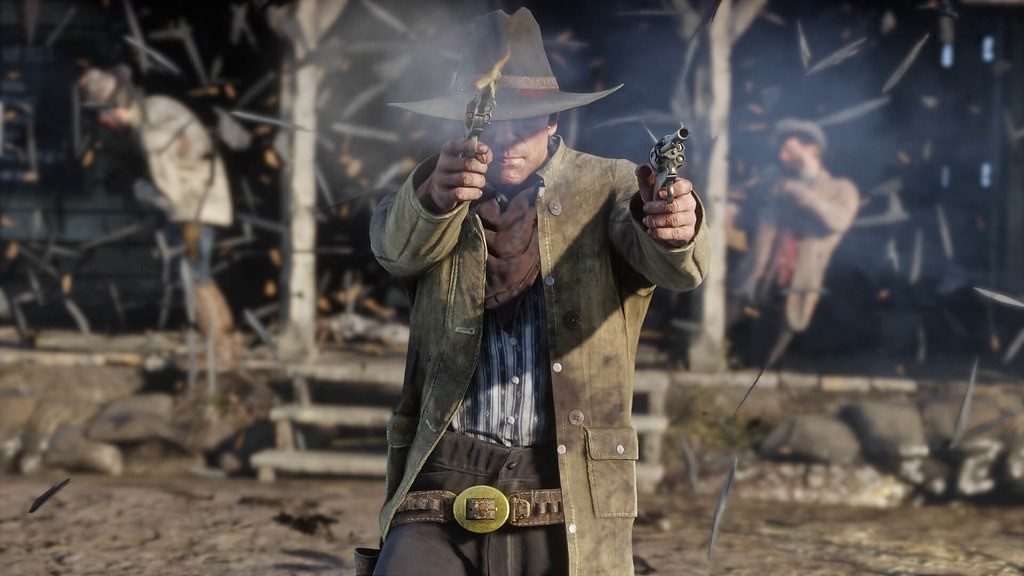 What would a Wild West setting be without saloons full of card-playing cowboys? There are various ways to gamble your cash within Red Dead Redemption – you can play Five Finger Fillet, Blackjack as well as Texas Hold’em poker – yes it turns out that online poker rooms can be found online and within popular video games! Red Dead Redemption 2 offers plenty of opportunity for you to settle down to a round of poker whether it is against the AI or versus your friend whilst playing Red Dead online.

There are a handful of locations at which you can gamble with your hard-earned (or hard-stolen) cash but remember to take your time soaking in the atmosphere of the saloon as you play. Swapping to first person at the table is particularly immersive and really brings you into the rich atmosphere that Rockstar has carefully crafted in the game. But ensure that you arrive to the poker table fully armed, this is the Wild West after all and a wild west poker game can get pretty hairy, especially if the stakes are high.

Finally, treasure hunting is a great way to make (or rather find) a whole load of cash as well as other interesting items such as rare weapons. In order to start your search, you will need to obtain a treasure map. Fortunately, there are lots of treasures to find and you’ll be in possession of at least a handful of maps before even really trying to seek them out. Early on in the game, make sure to keep an eye out for stranger missions, as one of them near the beginning of the game will reward you with a promising lead… Once you have the map, it’s down to good old-fashioned treasure hunting – simply keep your eyes open for the views and locations marked down, and you’ll be selling off gold bars in no time!

I am Inspired, Are You?

There you have it, Red Dead Redemption 2 is a truly unique game filled with a huge amount of depth that offers hours upon hours of fun and intrigue. It is arguably one of the most in-depth video games to have ever been created such is the scale of the world. Writing this article has inspired me to go out and catch some legendary animals of my own, wish me luck!