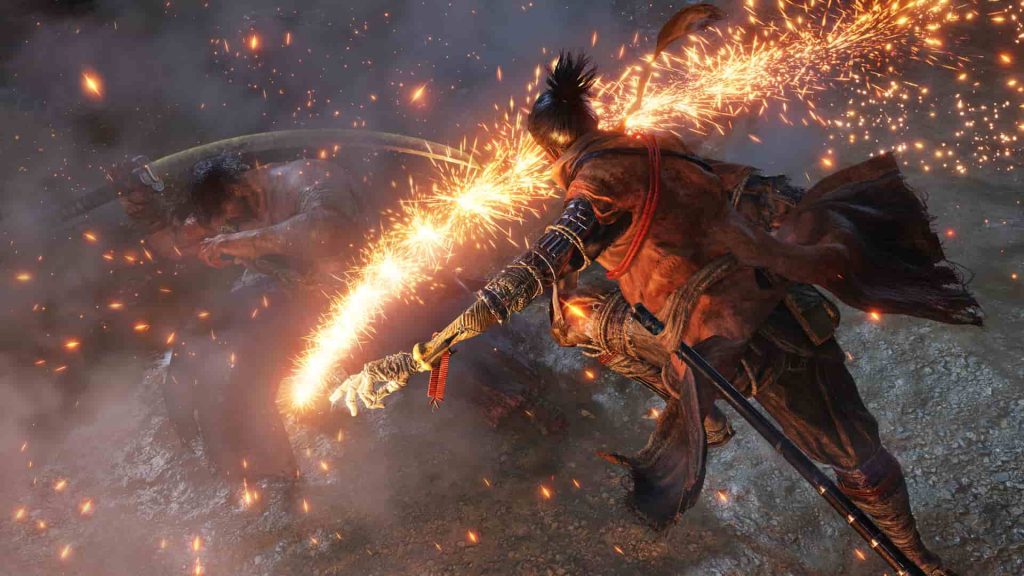 Ever since its tease back at The Game Awards 2017, my anticipation for whatever FromSoftware and Miyazaki would conjure up next has been bubbling away. Sekiro: Shadow Die Twice‘s debut at E3 2018 showed it to be a drastic shift from their previous work.

With only one month till release, I recently got a chance to sit down and play a demo for the game at my local GAME story here in the UK, as they were touring the country allowing the public to play the game.

And, let me tell you, within the first few minutes of playing I could tell that Sekiro is going to be a special game. It is the next evolution of the ‘Souls’ genre that FromSoftware (From) pioneered all the way back in 2009 with Demon Souls.

Get Ready To Learn A Whole New Fighting Style

The demo I got to play took place in the Winter Temple area shown off in the first trailer for the game. The first thing you have to do is grapple across a large chasm, immediately differentiating Sekiro from previous From games. Instantly, Sekiro felt like a completely different game.

The grapple clearly gave me new traversal skills; however, everything about the way the titular protagonist moved was quicker and more fluid. Walking and running were faster, attacks from both you and your enemies happened in the blink of an eye, and the ability to jump added a whole new dimension to the gameplay. Sekiro is a far cry from the restrictive and grounded movement found in Bloodborne and Dark Souls.

This freedom is something that I never knew I wanted in a From game. It allows you to completely rethink how you play. Now, you can observe enemies from afar or above, planning your attack and gaining a new mindset to how you approach enemies. You can also drop onto enemies from that vantage point performing a Shinobi Death Blow that instantly kills them.

That sense of freedom also translates to combat. When you aren’t sneaking through an area like a wolf stalking its prey, you engage in combat which at first glance looks similar to previous From games. But, combat and how you approach it is radically changed, making me feel like I was learning Bloodborne (my first souls-like game) all over again. That was an exciting thought as learning and slowly getting better at Bloodborne is one of my most cherished moments in gaming.

Combat revolves around a Posture system. At the top of the screen is your enemy’s posture bar, with yours at the bottom of the screen. As you hit and parry attacks your enemies bar will fill slowly. Once fully filled your nemesis will be left vulnerable and his posture will break for a few brief moments, allowing you to perform a Shinobi Death Blow, instantly killing them.

See, depleting your foe’s health bar is not enough, you also have to break their posture and perform that Death Blow in order to actually kill them. And, if you are not around to perform that blow, they will regain their posture, requiring you to break it once again.

This extends fights and makes them far more gruelling. Regular enemies and fodder will usually have the posture break once their healthbar has depleted. However, with mini-bosses, larger enemies, and bosses you will often have to keep fighting long after their healthbar is empty in order to get that finishing blow, due to their increased posture.

After around fifteen minutes of learning this new style I found it incredibly rewarding. Fights had a lot more tension and it truly felt like every action mattered. Every jump and roll away from an attack was more valuable than brute-forcing an enemy just to get the kill.

Sekiro’s combat requires a of patience. You have to be willing to engage with one enemy for several minutes contemplating every move you make and when you should attack. For some that will definitely be tedious. If you have played a From game before though, you will feel right at home.

The changes to the combat detailed above fundamentally change boss fights as well. The boss I got to fight was The Corrupted Monk. A towering foe that attacks rapidly and swiftly as he leaps across the large bridge we were fighting on. The long healthbars at the bottom of the screen are gone. While this monk has a lot of health, these fights are now clearly broken down into phases. With each phase, you need to both deplete the healthbar and break the Monk’s posture.

Describing how exhilarating and entrancing this fight was is almost impossible. Once I entered that arena I was fully focused on the monk, anticipating every attack and movement of his. I died a lot as I tried to only attack him. But, as I continued to play I quickly learned just how valuable parrying is in Sekiro. It is not an option. Instead, parrying is very much ancillary to your attacks. Timing your blocks just as the enemy was about to hit you is the key to taking on bosses and larger enemies.

Parrying will break the posture of that enemy quicker than if you were just attacking. This can speed up fights. However, parrying comes with faster attacks from your enemy and more of them. Once I parried one of the monks attacks he would quickly follow up with 3-4 more attacks that I could either dodge or parry as well. Parrying all of these attacks was the way to go.

As my timing improved I would enter an entrancing, inescapable rhythm that I thought was impossible to obtain at the start of my demo, which culminated in the Monk becoming staggered and landing a Shinobi Death Blow, thrusting my katana through the side of his ugly mask-wearing face.

That loop was highly engaging and once I learned how to approach this boss I felt a sense of gratification throughout the battle. Every action I performed was satisfying, rather than getting that satisfaction at the end of the fight with a game like Bloodborne. The Shinobi Death Blows also allow From to create some epic scripted final attacks on these bosses, truly putting the cherry on top of an already delicious, yet brutal, cake.

A Glimpse Into The World Of The Shinobi

My demo was fairly restrictive and kept me to one main path. However, I did manage to get some peaks at what FromSoftware’s vision of Shinobi-era Japan is like. About halfway through my demo, I got to a large canyon, where the game told me to stick to a wall. Upon doing so, a gigantic snake poked its head around the corner, possibly searching for me or just anything to devour on.

What then commenced was something that genuinely surprised me. I had to stealth past this snake as it was looking away from me, jumping from cliff to cliff in order to reach a narrow passage at the bottom of the canyon. Only for the snake to attack just as I escaped through. This stealth gameplay sequence felt incredibly odd for a From game. However, it worked seamlessly. Sticking to walls and narrowly avoiding the beast’s glare was just as satisfying as the game’s combat.

This section made me excited for the variation that From can put into this game. The prospect of breaking up combat with some more diverse gameplay could keep Sekiro feeling fresh many hours in. The giant snake also built upon that excitement, as the mythical and fantastical aspects of Sekiro are some of my most anticipated aspects. I can’t wait to see what crazy ideas Miyazaki and the team have implemented into the game.

You Should Be Excited For Sekiro

Sekiro: Shadows Die Twice should definitely be on your watch list. It is shaping up to be a game created by experienced developers who know just what to tweak and change in a genre that they have become the masters of.

The evolution made and variety added adds to the new satisfying and entrancing combat. Whether you have played a From game before or not Sekiro will hopefully be their best work yet when it releases on March 22, 2019.