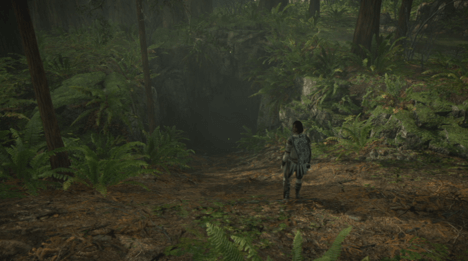 So Shadow of the Colossus on PS4 has proven to be a bit good, eh? A big reason for that is how respectful Bluepoint Games has been of the legacy of Team Ico, but did you know it’s full of secrets?

It didn’t stop them bending the rules a bit to fit in a cheeky Easter Egg for the recent spiritual sequel The Last Guardian.

Shadow of the Colossus Secrets – Find The Easter Eggs If you head to section 5E of the map, you should arrive at a forest area. Head in and you should spot a shrine to the left shortly after entering, close to a broken tree with a trail running by it. Follow that trail and you’ll find yourself outside a cave in the ground. It’s not a huge place, so head on in, look around, and you’ll soon see what you’re looking for. There it is, a glowing, leaky barrel at the back that is pretty familiar to fans of The Last Guardian. It’s Trico’s favourite tasty treat! Agro doesn’t seem to be into it though sadly. As a bonus for finding it, you’ll unlock the trophy ‘Boon of the Nomad’. Oh, and if you’re after an Ico nod to go with that, YouTuber Controle Dois has discovered it along the shoreline of the map. It’s a bit more obscure as tributes go, but if anyone has seen Ico’s ‘watermelon’ ending, you’ll know how lovely a nod it is.

That’s the tip of the iceberg for Shadow of the Colossus secrets though. Check out what else you can do and find in an otherwise bleak world.

The Secret Garden & Fruit of the Dead

You can return to the secret garden on top of the Shrine of Worship after you finish the game. To get up to it though, you will definitely need to have close to maximum stamina. so make sure you've found those lizard tails around the world.

Once you’re powerful enough, it's easy enough to climb up. Find the ivy to begin with and carefully make your way up from there. Upon reaching the top of the Shrine, you'll be able to enter the garden, and the giant stone bridge.

While you're in the Secret Garden, you can see fruit hanging from the trees. This is the Fruit of the Dead. Eating this fruit diminishes your stamina and health meters. Useful, only if you fancy making things a bit tougher on yourself.

You can perform the following tricks on your trusty steed Agro while riding. They generally don't have much purpose until later in the game, but it sure is fun to goof about in the meantime, practising for when they become handy.

One good use of your Agro stunts is that you can jump up and grab one of the flying birds from the back of the horse. Follow one on your horse and as it flies low, jump and grab on to it. It will carry you until your grip meter depletes.

Once you've felled a Colossus, you can go back and defeat it all over again. To do this, return to the location where you first fought the Colossus you ant to revisit (marked on your map with a head icon, and a beam of light in the game). You see the body of the Colossi covered in a film of debris

If you kneel and pray (hold R2) at the body you'll be able to start Reminiscence mode and fight it again with a film-grain visual sheen to the visuals. You'll also unlock the a PS4 trophy (The Past that Defines Thee) for your trouble.

There are two Time Attack modes and you can unlocking them by completing the game once. You'll find plenty of rewards to earn if you beat the Colossus within a specified time limit.

Beating the game once unlocks a new game+ mode. From here you can try the two Time Attack modes. Both grant you lots of new weapons and tools to make toppling the Colossi that bit easier.

To start a Time Attack, you must kneel and pray at one of the Colossus statues in the Shrine of Worship.

Here’s a rundown on the rewards and the requirement for them.

Brown Agoo (Defeat 16 Colossus)
You can now ride a brown Agro instead of a black one. You won’t curse the bugger any less.

Clearly there’s many things to love about Bluepoint’s masterful remake of Shadow of the Colossus. You’re able to uncover these juicy secrets and Easter Eggs yourself, as the game has officially released.