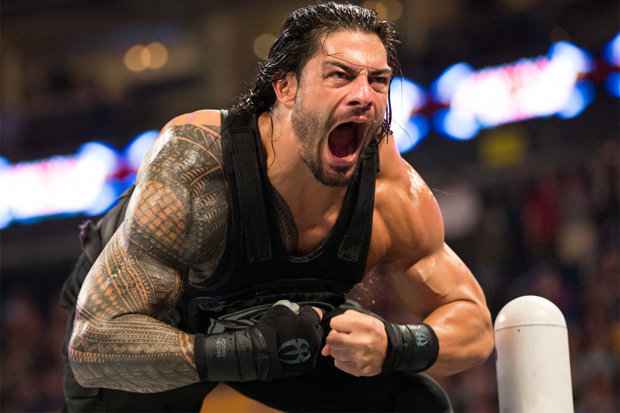 The Western world is in some pretty shades of shit right now. Puppeteers in the White House, clowns in Downing Street, and I think Russia is under the control of a secret cult of mimes. Video games have been terrible for a long time though, just ask the internet. They'll tell you exactly how rubbish every supposedly ‘good' game or console is since 2006.

You see, nothing is as good as it was when Chubby Gristle came out on the ZX Sinclair Spectrum because all of a sudden companies are being too safe and greedy and charging too much for games. Because back in the 1800's videogames were more affordable than bread, and twice as nourishing. Do you know what though? In the mad bastard hands of one of the most tyrannical egomaniacs in all of history lies the key to the future of humanity, and video games. Vincent Kennedy McMahon, the man responsible for Michael Cole (and WWE), has a secret weapon that could save us all, or enslave the world. Or, for the sake of this article, it could right all the future wrongs of video games. That weapon is none other than the unpalatable, yet handsome, bulletproof vest wearing relative of The Rock, Roman Reigns.

No matter how hard Vince tries to make people like Roman, society balks at him. People go to unreasonable lengths to take the opposite stance to anything the Brylcreem-lavished man-mountain says or does. If Vince got Reigns to condemn the concept of nuclear war at breakfast, then the world would probably be in ashes by lunch.

Of course this would be a dangerous use of the Reigns weapon. So I put it to Vince that Roman should be used as a sidestepping technique for video game-related disasters. A world with no more No Man's Sky style hate parades. No more screeching and self-mutilation because Mass Effect 3 chose three different colors of Skittles to determine the ending. Reigns can manipulate us all into placidity towards video game controversies by simply being inserted into awkward situations such as these.

Problem: Your game is delayed, again, and fans are raging on the internet about cancelling pre-orders.

Solution: Roman Reigns takes to ResetEra and says he'll personally kick the asses of everyone at the company for delaying this much-anticipated title.

Result: ResetEra shuts down overnight in shame, and fans of your game pre-order five copies each just to spite Roman, because fuck that guy.

Problem: Microsoft has just announced they've gained exclusive rights to a beloved franchise that is synonymous with PlayStation. Fans are suitably upset with Sony for this slight.

Solution: Reigns takes to YouTube to declare ‘I'm not a PC guy, I'm not a PS4 guy, I'm an Xbox guy. All thanks to this amazing exclusive''.

Result: Roman's video sees YouTube implement negative numbers of hits for the first time. The developer and publisher behind the exclusive give Microsoft back their money with interest and say they'll make the game for free on all other formats but Xbox. I’m pretty sure this is what happened to Microsoft’s exclusives anyway.

Problem: You're a small company caught in the headlights of the big time. You made some extravagant promises about your new game and you didn't deliver. Everyone wants you dead and believes you are the Antichrist. This is apparently entirely justified.

Solution: Make an apology at E3, live on stage, and have Roman Reigns Superman Punch you right in the jaw.

Result: Named Man/Woman of the Year and everyone is okay with it. Also, that game you made is now considered better than sliced bread and sex combined. Man, what would you even call that? Sex Bread? Sex Slices? Sliced Relations?

Problem: Your company has utterly humiliated a legendary game developer by ruining their final game. Then tossed them out on the street, likely set their dog on fire because you are Konami, and you are collectively a humongous bastard.

Solution: Pay Roman Reigns to get pally with Hideo Koji…that developer person. Because if anyone could unironically love Roman Reigns, it’s Koj.

Result: Kojim…that guy/gal falls in love with Roman's silky smooth locks and starts flooding Twitter with snaps of Reigns eating sausages or noodles or something. Developer's fans all agree Konami were probably right to treat him the way they did, and Metal Gear Survive 2 goes on to outsell all previous Metal Gear titles. Said developer is last seen going to Mads Mikkelsen's house for dinner.

Problem: You just announced the successor to your wildly popular console, but the public is outraged you want to charge a grand for it.

Result: Due to the now Pavlovian response to the ‘'DER DUN! DER DUN!'' of Reign's theme song, the crowd literally throw money at you to make it stop. The company debt is erased overnight. The power of disdain has saved you.

Vince, do the right thing. If you can't use Roman to save the world, let him at least save video games.