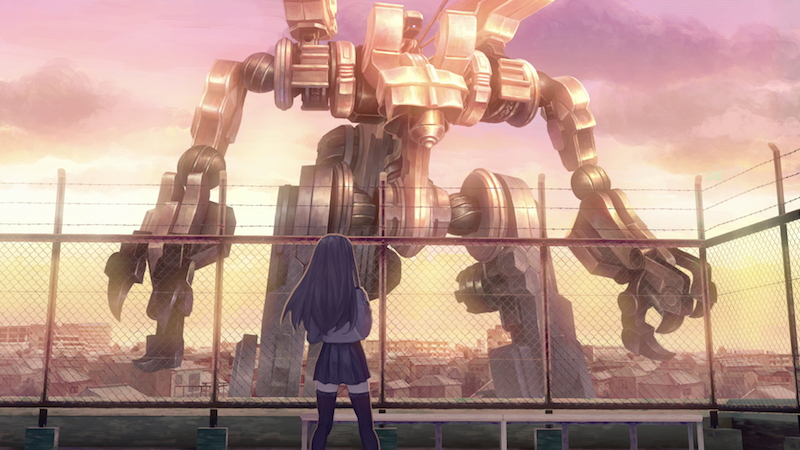 13 Sentinels: Aegis Rim PS4 Review – With Odin Sphere and Dragon’s Crown, it’s certainly fair to say that legendary Japanese developer Vanillaware has carved out something of a specialist niche for itself in creating visually arresting and deep action RPGs. Enter then, 13 Sentinels: Aegis Rim. A sci-fi tactical battler that deftly marries an emotionally heart-wrenching plot with a sophisticated time travel premise and a cast of genuinely likeable characters, it’s with a degree of relief and fanfare that i can confidently declare that Vanillaware’s latest effort also happens to be its greatest too.

A Sometimes Bizarre, But Always Opulent And Ruthlessly Compelling Odyssey That Everyone Should Play

Kicking off during the end of the Shōwa-era in the 1980s, 13 Sentinels: Aegis Rim focuses in on 13 different teenagers who find their slice-of-life existences disrupted by an alien invasion that spans multiple time periods and dimensions. So we have high school shenanigans, mech (Sentinel) combat, emotional drama and universe-shattering time travel – yeah, 13 Sentinels: Aegis Rim has a lot going on.

Despite the seemingly overwhelming amalgam of narrative devices and constructs (time travel is a provably immensely difficult theme for writers of any calibre to pull off successfully without disappearing up their own rectum), 13 Sentinels: Aegis Rim still manages to keep everything together without creaking and breaking under the immense weight of its narrative ambition.

Part of how 13 Sentinels: Aegis Rim achieves this is by providing an extended set of prologues which introduce players to the majority of the main cast of characters. Indeed, rather than feeling dragged out or otherwise plodding, these prologues do a fantastic job of setting the scene and introducing players to the notable quirks that each of the 13 protagonists possess.

Once into the game proper, 13 Sentinels: Aegis Rim broadly breaks down between a trio of different gameplay categories – Adventure, Battles and Archives. While playing the adventure segments, players will find themselves exploring a 2D scrolling environments where characters can be talked to and objects can be discovered to propel the narrative forward.

Rather than just being straightforward point and click affairs, these sections introduce a surprising degree of non-linearity to the proceedings. Selected objects and certain topics can become special keywords which are uploaded to a special ‘Cloud Sync’ database. From here, by using these terms with particular characters and elements in the environment at the right time, different outcomes can be produced – providing a tantalising insight into the substantial amount of replayability that 13 Sentinels: Aegis Rim encompasses.

Luckily, 13 Sentinels manages to anchor its story in such a way that it becomes interesting and unexpectedly approachable early on. Chiefly this is achieved through extended exposure to the high school setting and cast of characters that inhabit it, providing a neat chunk of slice of life style drama where the different characters play off each other about dates, pop culture, college food and teenage awkwardness.

As a result, these much lighter moments and scenes dovetail beautifully into 13 Sentinels: Aegis Rim’s more complex narrative beats which (without giving too much away), fling themselves head-first into the tricky and deep themes of time-travel and extra-terrestrial invasion. In this sense, 13 Sentinels: Aegis Rim conjures a sort of spectacle that is reminiscent of teenage mecha anime dramas of the past such as Neon Genesis Evangelion and RahXephon, as it deftly intertwines high brow themes of time travel and existentialism with slice of life college drama in a way that not many video game narratives manage to achieve.

More than that, these sections of the game do a stellar job of showcasing Vanillaware’s trademark and eye-catching watercolor style as well. Decked out with highly detailed characters which occasionally lean into the developer’s cheeky penchant for fan-service, as well as vivid, retina-stroking backdrops, an argument could certainly be made that Vanillaware’s visual style is at it’s best when applied to the more grounded settings of 13 Sentinels than the high fantasy of Odin Sphere and Dragon’s Crown.

It should also be noted too that 13 Sentinels story is also pretty nuts beyond its already lofty sci-fi premise. From time-travelling assassins and cutesy robots to vaguely murderous talking cats, the plot of 13 Sentinels is one that always manages to surprise while walking an odd tightrope between po-faced seriousness and eye-brow raising absurdity. Where 13 Sentinels: Aegis Rim really excels though is in how it efficiently drip-feeds new characters and events to players in such a fashion that always feels compelling. No matter how off-piste the story may get, 13 Sentinels just about always manages to have a satisfying pay off.

Next up are the battles. With the Earth coming under attack from a mysterious alien force (and the less you know about them the better – this is 100% a game you want to go in completely blank on), 13 Sentinels: Aegis Rim switches from the relatively relaxed beats of its narrative adventure sections to its battle segments which are played out in a real-time, turn-based fashion hybrid that it isn’t too dissimilar from Final Fantasy VII’s Active Time Battles.

What is especially jarring about these battle sections however, is that the visual presentation is so divorced from the eye-opening aesthetic of the adventure segments that these battle sections don’t even look like they belong to the same game. Looking more akin to an isometric VR training simulation, it’s not unreasonable to say that these sections were something of a downer after the opulent presentation of the adventure sections.

Once you’re able to look past the underwhelming veneer of 13 Sentinel’s battle sections, a surprisingly sophisticated affair begins to reveal itself. In each battle there are a set of conditions which must be fulfilled for you to ‘win’ each battle as well as a series of opposite conditions which must be avoided. In practice, you’ll spend a lot of time fighting off waves of aliens called ‘Kaijuu’ (not those Kaiju) in the titular mech Sentinels, as you defend a central hub all the while trying to keep your pilots alive – as a single lost life means the battle ends.

Clocking in at very often no longer than five or ten minutes in length, these battle sections are thankfully fairly breezy affairs that can actually prove to be really quite satisfying in the later stages of the game. With each Sentinel leveraging a series of different attacks and defensive abilities, players must fend off waves of different Kaijuu which each have their own strengths, weaknesses and special abilities and in the later stages these battles become quite complex conflicts, requiring players to co-ordinate the various Sentinels effectively in order to be victorious.

Indeed this level of planning and coordination is also required before the battles kick off too, as each of the 13 Sentinels have their own strengths and weaknesses; some maybe better suited to destroying ground based enemies, while others will be primarily proficient in dealing death to skybound foes. Picking the right strike and defense squads for each battle then, is absolutely vital. Speaking of vital, each Sentinel can be upgraded before battle commences too, with meta-chip currency being used to upgrade existing abilities or purchase all new ones to add to your repertoire.

The final element of 13 Sentinels cross-genre approach is its archive segment. With such a complicated narrative and sprawling cast of characters, the archive portions of the game prove to be extremely handy as they act as a digest of sorts that link up the various characters, events and plot points of 13 Sentinels in a way that is easily understood and kept up with. Luckily, the difficultly setting for these battle segments can be changed at any time.

Capping the whole affair off is the fact that the player has a remarkable degree of freedom as to the order in which they complete these activities. The freedom exists to buzzsaw your way through the battles only and then do the adventure segments after – or vice-versa.

A visually arresting single-player adventure set at the end of the world with massive mechs, invading aliens and all manner of time-travelling tomfoolery, 13 Sentinels: Aegis Rim seems like it shouldn’t work – and yet it does; it really does and makes a robust case for itself as one of the best games Vanillaware has made to date.

An accomplished mixture of sophisticated story sci-fi story beats, off the wall absurdity and satisfying tactical battles, 13 Sentinels: Aegis Rim is a rare sort of genre crossover that ends up being far more than the sum of its parts. Vanillaware's latest is simply unmissable.