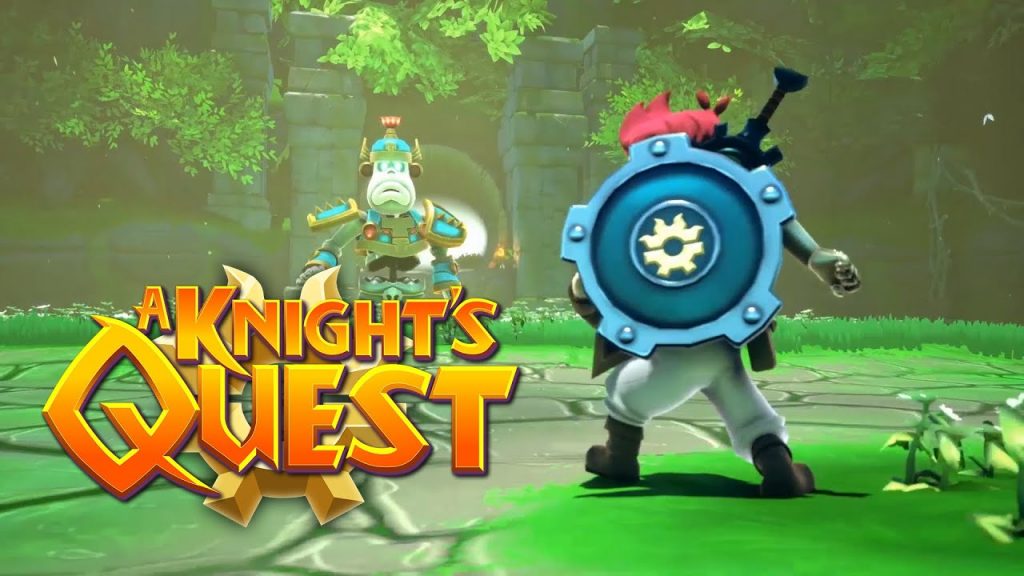 Another day, another RPG to play. I do love role-playing games and the genre itself is probably up there amongst my favourites. The issue these days is that nearly every game has RPG elements, is an actual RPG or it really, really wants to be one. A good game of this type will need to stand out, do something different and be of a very high quality. A Knight’s Quest is an open-world game for PS4 is one that fits this mould, let’s see how it measures up against its competition.

You play as Rusty, a happy go lucky adventurer who accidentally sets off a chain of events that threaten the world you live in. You set out on a quest to right the wrongs of your ever-snowballing mishap, seek out the mysterious Guardians, find the Spirit Knights and save the world. It’s quite a generic tale that is quite blandly written but it was comical in places when it did not try too hard to be humorous. It’s not a bad tale overall and did not distract me from my goal, it’s just not very memorable and gave me very little drive to carry on with the main storyline.

Struggling to Find an Identity

Gameplay-wise, A Knights quest threw up very few surprises. Go here, grab that, upgrade this and beat this boss. It’s all standard RPG fare. There are some puzzles to complete, collectables to grab and materials to seek out but it has all been done before; none of it is new or unique in any way. This may sound like I am bashing the game, but I am really looking for something to make this title stand out in a very packed genre that I love dearly.

I found that this title struggled for a real identity regularly, was it a platformer? Was it an adventure RPG? These game styles did sometimes work together well but quite often they did not, they felt very fragmented and not very well implemented. There was a map but I found it difficult to locate other quests, NPC’s and locations I needed to get to. I often got lost and there was a lot of backtracking and this really hammered home the game’s flaws in its design and its lack of focus.

Platforming is a big part of A Knights Quest, from solving puzzles to reaching high collectables, you will be doing a lot of jumping and climbing. You can even wall run to bridge the larger gaps in the game, the platforming is fun, simple and serves its purpose well. I enjoyed the platforming challenges, where you had to collect a number of collectables in a certain time while navigating the games pretty landscapes. There were a few edges I had trouble grabbing but these instances were very rare and were not detrimental to the overall experience.

While I found the combat system quite functional, I did think it was a bit basic. Especially to start with. Yes there is a parry system which increases the functionality of your equipped weapons, yes there are a few different attacks but overall it would have been nice to have a few different combos to mix things up a bit. I found the combat did get a bit repetitive towards the end of my playtime and it would have benefited from a bit more depth.

There were a few challenges littered around the landscape, time-based challenges and combat challenges that usually led you to a chest or a sought after collectable. None were too difficult and all were a welcome distraction from the games main quest. There were also multiple side quests dotted about but they were never overly complicated or imaginative in any way but they did break up what would have been a quite rigid experience.

A Bright and Colourful Experience

I really enjoyed the bright chunky graphical design of The Knights Questa and at times the lighting was superb. I did have a few issues on my PlayStation Pro though. Sometimes I had texture pop-in and texture load issues, as the game went on I noticed it less and less though and it was not really a massive issue in the grand scheme of things. Sometimes even collectables I had collected re-appeared until I got close to them before they disappeared again. It was a bit peculiar at times but should be easily remedied via an update.

Sound-wise, while not being bad, it was never outstanding. Some of the sound effects became repetitive and irksome, especially the grunting when Rusty was jumping. Luckily there was enough in the soundtrack and other noises to distract me and overall the sound design was good. I would have liked some voice acting to give more life to the world but given the budget that was never going to be likely.

All the generic systems, bland quests and well-trodden story aside, I did quite enjoy playing The Knights Quest. It ran well, was bright, colourful and was very easy going. I enjoyed collecting new upgrades, weapons and progressing through its charming landscape. I just wished that it offered something new, unique or memorable. It would have benefitted from spoken dialogue, slightly better writing and perhaps a deeper combat system to get stuck into.

If you are in the market for a cute, whimsical RPG then this title may be for you. If however, you are looking for something deep, new and unique. Look elsewhere. Even though it’s not a bad game and it is quite fun in places, I find it hard to recommend over other titles in the genre.

A Knights Quest is available now on PlayStation 4.

A Knights Quest is not a bad game, I just find it hard to recommend it in an overcrowded genre of adventure RPG's. Its quests are bland, its animation and graphics are sometimes off and its gameplay a bit fragmented and sometimes repetitive. Overall though it is fun and if you really want to play an RPG of this type then this game can be fun and rewarding, it's just hampered by its lack of uniqueness and anything to really make it stand out from other games of this type. It has a few small issues but these can hopefully be ironed out in the future.