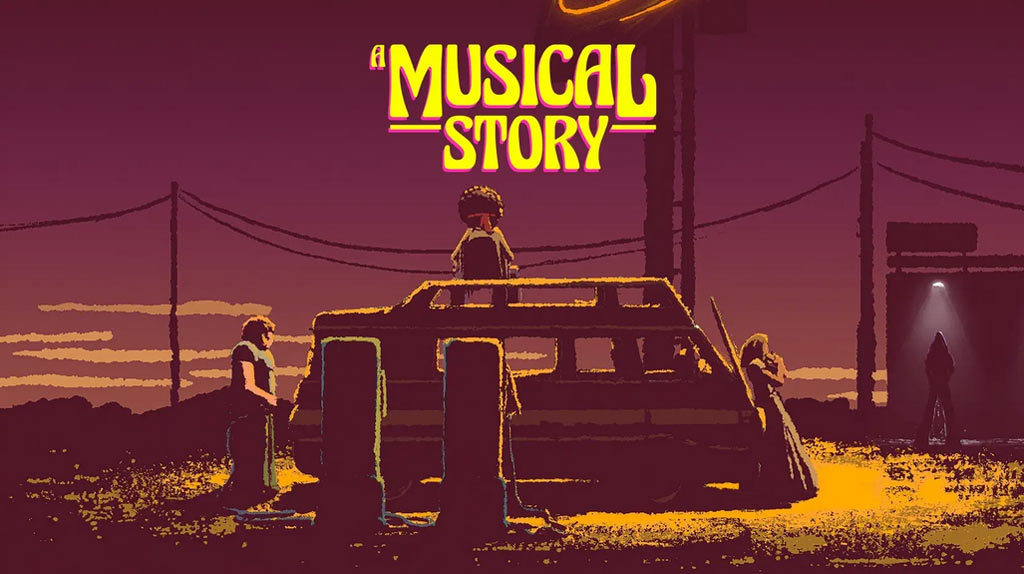 A Musical Story PS4 Review – As a songwriter and performing musician of over 30 years, I’ve learnt the value of finely crafted pop music as I’ve spent a good proportion of my time as a musician trying (and failing) to emulate some of the great masters of modern music. As well as a rare talent for a good tune, it’s the arrangement of the musical parts which is often key to creating timeless and infinitely influential albums such as Pet Sounds, Abbey Road, Forever Changes and Innervisions. All of these albums share the same DNA of simplicity – each individual part is uncomplicated but when all of these instruments and voices weave together, it creates a unique synchronicity which doesn’t happen by chance…

Taking the basic rhythm game philosophy as pioneered by Parappa the Rapper and made mainstream by Dance Dance Revolution and Guitar Hero, A Musical Story aims for a more low-key indie melancholy but retains the timed button presses familiar to most video game enthusiasts. French developers Glee-Cheese Studio tell the story of an aspiring trio of poor musicians who work hard together rehearsing their blues / soul / folk music with a view to making it big on the circuit, while living the rock musician dream on a budget.

Told without dialogue and with three frame animated stills in a beautifully evocative pixel art style, the story begins with our protagonist Gabriel (the guitarist) on life support in a hospital bed before resetting back to the gestation of the trio’s musical journey.

Along with the unique and touching melancholy which pervades the atmosphere of the story, the USP is the way the rhythm based interactions have been structured. Each song grows from the individual parts laid down by each musician and using the L1 and R1 buttons, you synch your button presses with the instrument notes as they appear in a circle for the duration of four bars of music. The complexity grows gradually as the group’s music becomes more intricate and there is great joy in hearing how the individual parts interlink once you have tapped the notes out in time with the prompts. 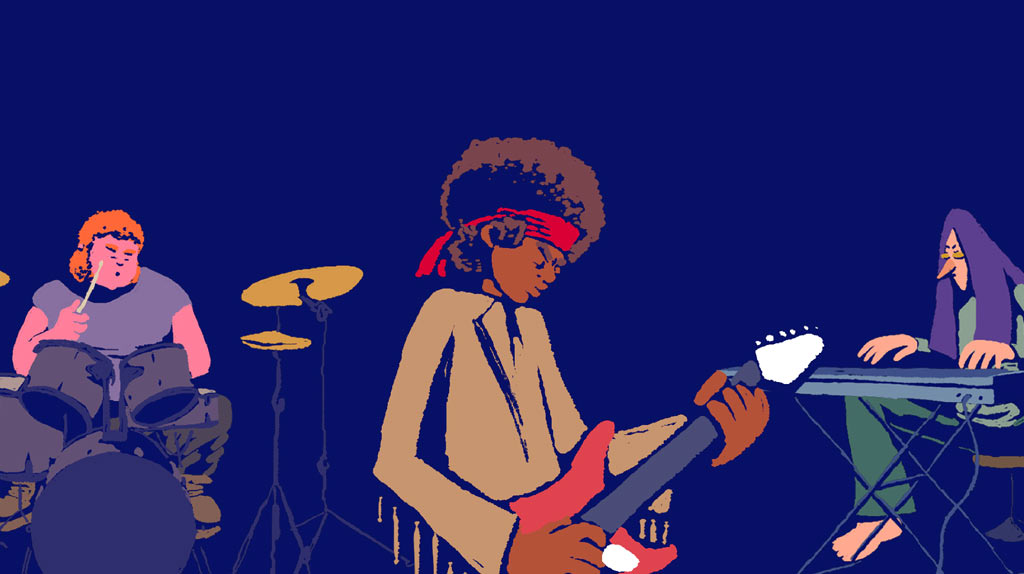 Simple percussion parts are soon layered up with off-beat guitar or keyboard phrases and soon a fully fledged instrumental track is created. While you aren’t able to contribute to these tunes, there’s a real feeling of investment in the creation of the music through the simple idea of breaking down a complex piece of music into its individual elements. Wordless (or obtusely worded) vocal parts become an additional element for you to incorporate when our hero meets his soulmate in a folk club on their low budget tour. She makes the trio a quartet and they forge onward in their unspoken dream of making the big time in their desolate but meaningful road trip.

The soundtrack is impressive throughout, with a nice blend of retro styles encompassing rock, folk and lo-fi indie ambient instrumental pieces. Each piece has interlocking parts which are brought to the fore when you are required to ‘play’ them before the mix settles to reveal the whole layered tracks as one perfectly composed piece of music. 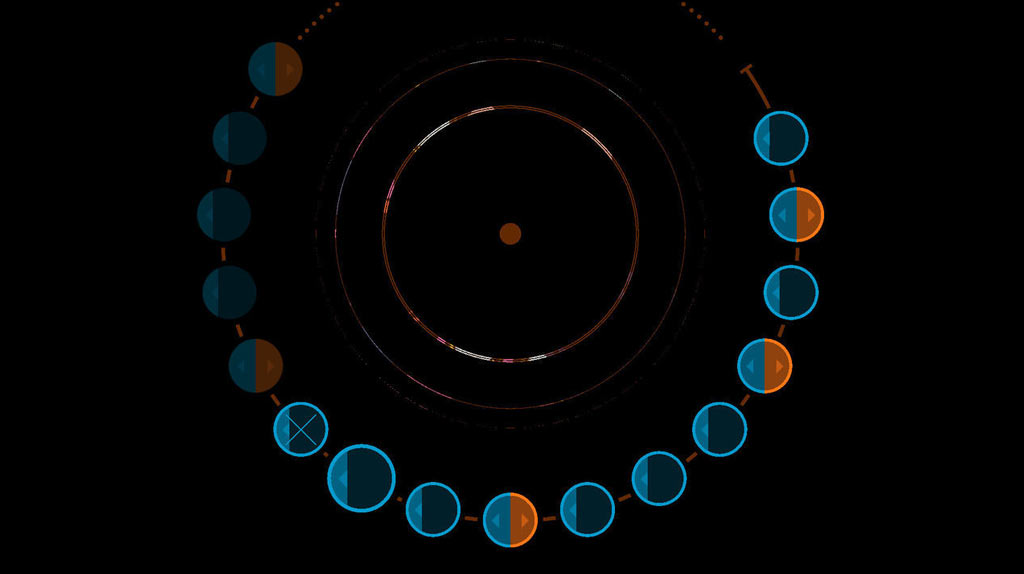 The visuals are highly evocative despite their lo-res retro design, and each character is quietly developed during the road trip, with plenty left to the imagination thanks to the nature of the animated stills and the lack of dialogue. Nevertheless, the pictures tell a thousand words and you really start to root for these guys making their travails even more poignant. Progress is autosaved after each small chapter and the game reverts to a map charting the group’s story towards what can only be a tragic twist after the opening scene.

The only criticism which sprang to mind during my playthrough was the repetition inherent within the four bar instrument parts which became more apparent halfway through the story when I felt like I was repeating myself within very similar tempo pieces. More variety in the tempo of the music would have probably negated this but I presumed the chilled melancholia of the musical story didn’t seem particularly suited to up-tempo pieces for the songwriters. 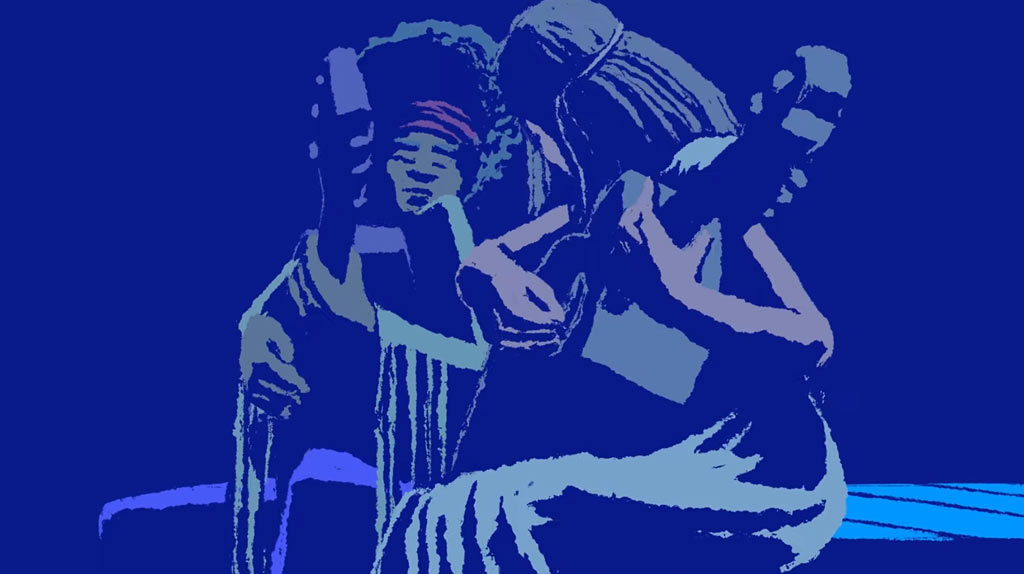 I’ve read quite a few gripes from other reviewers who have complained that the interactive rhythm elements were too difficult and progression was dependent on perfecting each four bar phrase and the game wasn’t forgiving enough for small mistakes. Perhaps I had an advantage being a musician, but there really isn’t anything here to permanently stump non-musicians as long as you have a bit of patience. True some of the more ambient tunes don’t have an obvious ‘beat’ but as the musical sections are so short, it’s really not that challenging as you soon start to ‘feel’ the unheard 1-2-3-4 behind the notes you need to play. Anyway, the developers have included a hand-holding option should you become ‘stuck’.

So by the end of the two hour runtime, I felt like A Musical Story had successfully hooked me and managed to spin the mainstream rhythm game into an original, heartfelt and thoroughly memorable experience. Sure, if you aren’t enamoured with the genre of music and the vibes of optimistic desolation, you’ll really not warm to this. But if you have a penchant for early Beck, Elliott Smith, The Eels and any other indie songwriters who wore their hearts on their sleeves and strove for the big time, you’re sure to love taking a musical journey with these guys.

A Musical Story is available now on PS4 and PS5

A unique and finely crafted take on the musical rhythm genre, with lovely animated pixel-art stills and a truly excellent soundtrack telling the achingly heartfelt tale of a group of poor but talented musicians striving for success on their first tour. It's a brief experience and the lo-fi indie sensibilities may not be for everyone, but if you err towards left-field art and music, it's highly recommended.