There’s a highly negative connotation to the phrase ‘more of the same’ in videogameland. While it is indeed great to have fresh ideas and radical innovations, they carry risks that don’t always pay off. You still need to have stuff that just works as it is, and can be tweaked and tinkered with to freshen it up, perhaps throw in some ideas from other games and make them your own. Where it can be questionable perhaps, is when you do innovate, and then go back to what you did before that innovation. Take Housemarque’s recent output. Dead Nation was a fun twin-stick shooter, but it was hardly worthy of remembrance for anything particularly exciting and fresh. Then Housemarque went and made Resogun, which is still considered one of the best games available on PS4. Yes, it’s still a shooter at heart, but also very different from the one that preceded it. Now, the developer has returned to the twin-stick shooter genre with Alienation, and ‘more of the same ‘ is very much the order of the day, but is it a regression or a redefining? 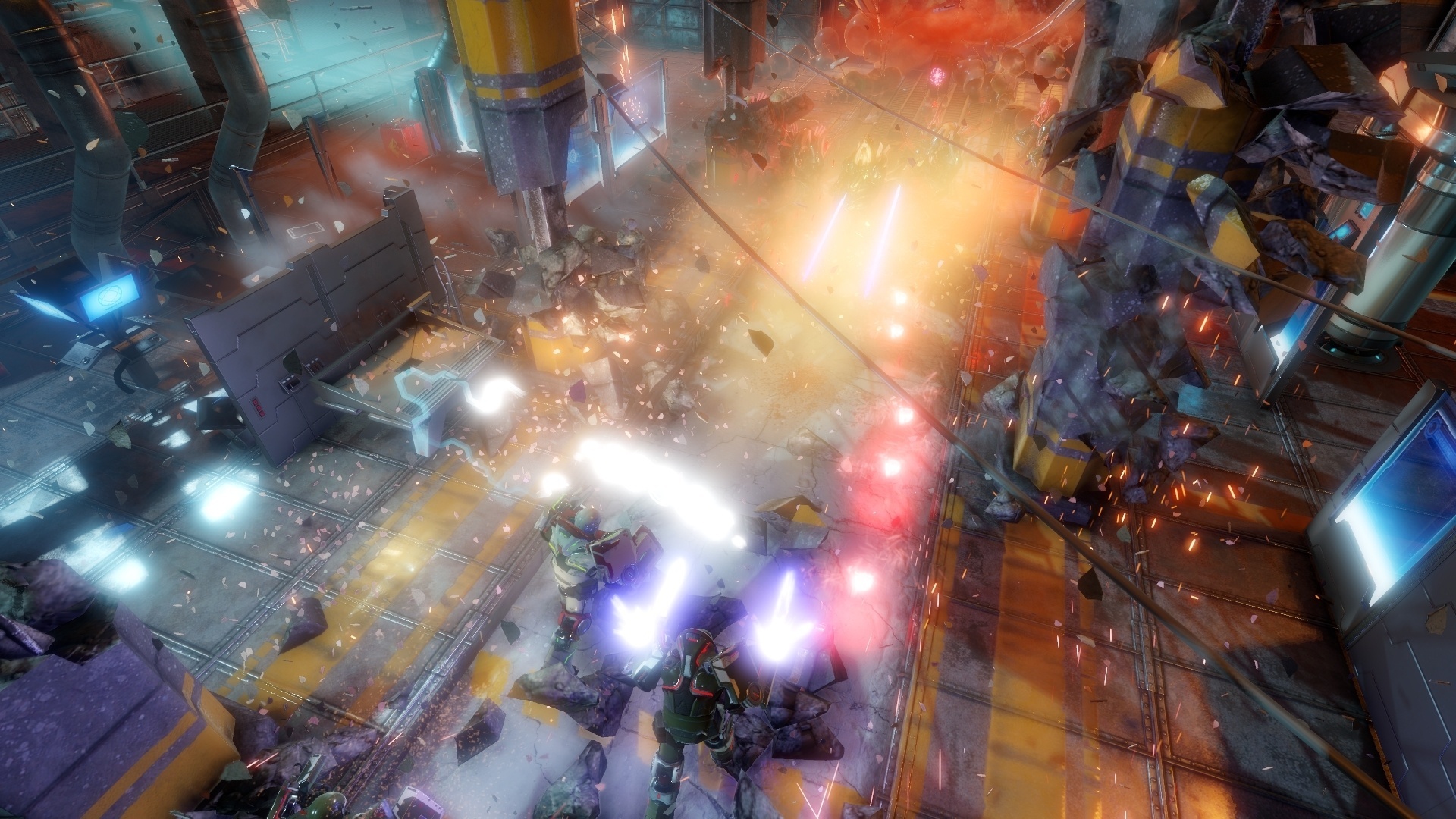 There’s a plot to Alienation, but I’ll save you the in-depth description as it’s a) rather lightweight and b) fairly pointless in a twin-stick shooter. Aliens are swarming the Earth, you need to straight-up blow them into giblets. Simple as that. Luckily, the way the game plays is not quite so simple. If you’re at all familiar with Dead Nation then you should feel on pretty safe ground here; use the left stick to move, right to aim, and the triggers for combat-related stuff. Alienation also does the whole levelling and upgrading schtick from Dead Nation, but creates more of an ARPG feel by including loot drops within the stages, the likelihood of which they drop is increased via difficulty settings as with everything that uses loot drop systems. This does add a layer of depth that Dead Nation never possessed, and within the confines of a an isometric, twin-stick shooter, it works quite well too. Though it’s often too hectic to know what you actually picked up until a stage is finished, finding loot is a joy that amazingly doesn’t get old, even after several years of developers swamping the industry with the system. It certainly spices up the levelling and upgrading a bit, just not by a lot.

Also helping Alienation stand out from standard twin-stickers is its masterclass in eye-popping visual flair. Every neon flash of gunfire, explosion, fire and special move is mesmerising to watch. The way smoke billows in the aftermath of a blast is particularly enchanting. Housemarque clearly know how to make a PS4 game that dazzles. At the height of Alienation’s chaotic carnage, the screen is almost pulsating with colors, shapes and sounds. Stylistically, the game is an incredible piece of work for what boils down to a fairly rudimentary ‘shoot the aliens in their vague approximations of a face’ romp. Furthermore, Housemarque knows how to make a fun shooter too. The combat is satisfyingly tight, with guns packing an appropriate amount of punch. In the heat of battle the sight of chitinous armour being ripped to shreds by the hundreds is the fuel for pure, escapist joy. You can cycle between your Primary, Secondary and Heavy weapons with the touch of a button, just about keeping you in bullets as a horde of mutants descend upon you to engulf you in their violent savagery. The three character classes also have their own unique abilities that, when used correctly, are lifesavers. Powers like the nano storm rip through crowds of aliens for a short time, thinning the herd just when they could overwhelm you, while the Tank class can form shields with its plated armour.

The classes dovetail nicely with each other, and with the right crew of people, there’s almost a perfect synergy in the manner they work together. It evokes a warm feeling of nostalgia when you team up with others, whooping, shouting and arguing like the best co-op experiences do. In short, it’s great mindless fun. A shame then, that it’s kept for online use only. Alienation would be a fine couch co-op game, as it’s at its very best with other people; to not be able to have that with your friends in the comfort of your own home is a tad disappointing. The strength of the co-op unfortunately only amplifies how humdrum Alienation feels solo. The structure is fairly stale when you strip away the jollies of co-op play. The cycle of go here, kill these, destroy this, or press that is fine initially, while the sparkly newness and visual pizzazz keeps you entertained. It’s when that fades things become a little mundane. Alienation is sadly not much more than that cycle at heart. Events pepper the levels, giving you one–off creatures to defeat for some juicy loot, and of course it has the regular looting to fall back on, but it doesn’t fundamentally change the way the game plays. It’s fair to say that the endgame is pretty fantastic stuff, again though, once you’ve done it the first time, that’s it. What do you do from there? Do it all again. Fair enough, if you have friends, but the tail on Alienation could well be a lot shorter than Housemarque may have hoped for.

While these criticisms may make it sound like the game is a huge disappointment, it’s not really the case. The issue at hand is more that Alienation feels like a polished revamp of the studio’s past. That doesn’t prevent Alienation from being a highly enjoyable game, what’s there works well enough to make the game exist after all, but it does feel like a microbial step back. After Resogun, there was a feeling that Housemarque could produce something as good, if not better, again. Alienation falls short of the company’s best work, and indeed, falls way short of a game it appears to have borrowed a few ideas from (the glorious Helldiv). Concurrently, there is no denying it has still created a massively-entertaining and visually-dazzling online co-op shooter with a rather monotonous solo experience. With Alienation, ‘more of the same’ is mostly pleasing, but it certainly doesn’t stop it from being a little disappointing to boot.

On the one hand, Alienation is a joyous, punchy co-op romp of a twin-stick shooter, with every on-screen detail a veritable celebration of beautiful chaos. On the other, it’s a step backwards in terms of what Housemarque could do. What is undeniable though, is that Alienation is a rather good time.