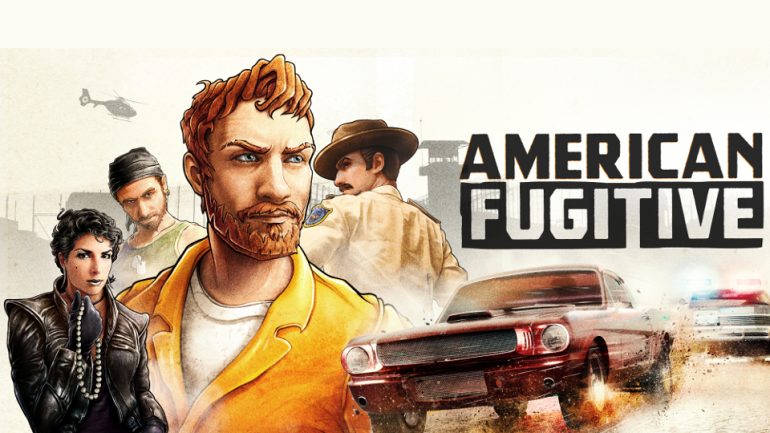 If American Fugitive feels like a throwback that’s because it absolutely is. With open-world, fully three-dimensional crime epics like Grand Theft Auto V, Sleeping Dogs and the wonderfully silly Saints Row collectively establishing the status quo for years now, it’s a little surprising that until now nobody has delved deeper into Rockstar’s catalogue to provide the foundation for a contemporary effort set in that old style.

American Fugitive from British developer Fallen Tree Games is one such game that resurrects Rockstar’s pre-Grand Theft Auto III template, and it might have succeeded in doing so with aplomb were it not for a raft of odd design choices and troubling shortcomings.

As per its inspiration, American Fugitive begins in a fashion that will be familiar to those who have dipped their toes in the waters of Rockstar’s halcyon offerings. As rogueish bad-but-good boy Will Riley, players witness the murder of his father and the subsequent frame job that ends up with him taking an extended stay in the grey bar hotel. Naturally he escapes, hooks up with some other bad-but-good dudes from his past and goes about trying to clear his name and nail the original perpetrator behind the injustice.

Though hardly original, the plot nonetheless satisfies modestly with entertaining writing at points; having to pretend you’re the fiancee of an upper crust socialite while a heist is carried out proves to be a highlight early on. Ultimately though, while it’s hardly groundbreaking stuff across the breadth of its storytelling, it is passably entertaining stuff all the same.

Clearly developed on a lower budget, American Fugitive imparts its parable voicelessly through text and talking head style pop-outs in lieu of fully animated cutscenes or in-game scripted sequences. Again, this is fine, not least because it dovetails quite neatly into the old-school style of presentation that was synonymous with the first two Grand Theft Auto games.

Equally, the mission structure of American Fugitive is straight out of Rockstar’s playbook too. Mission givers are represented by single letter designations in the UI, and the sorts of jobs that they dole out are, again, just what you might expect too. From running a car off the road, taking a vehicle to the crusher, killing some bad dudes and respraying a car, it’s all fairly expected fare for the most part, though the variety of mission types does widen as you unlock the other two islands in the game – again, another wink and a nod at the old-school Rockstar script.

In addition to these missions, American Fugitive also has many activities strewn across its game world such as time trials, and ramp jumps which can be indulged – the common thread between them all being the money and experience points that they give out for completing them. Breaking away from its classical inspiration, American Fugitive has a progression tree that offers a number of different skills such as increasing your maximum health, reduce vehicle damage and others for you to put your hard won points and cash into.

Speaking of cash, another area in which American Fugitive does things a little differently is in its robbery and home invasion system. Just about any house and building you see can be robbed, but to do so successfully you need to do your due diligence. By peeking into windows you can see which rooms are occupied and which aren’t, and from there you can identify a suitable point of ingress and enter the property.

Once you’re inside, rather than switching to a view inside the building, you are instead provided with a basic, two-dimensional plan view where your character is represented by an icon and you move from room to room, searching and looting as much as you can before the cops arrive. Where things can get a little sticky is if there are folks present, but luckily you have options; you can attempt to flee or restrain them; the success of the latter governed by the quality of restraints that you have on your person. It’s a neat little aspect of the game that can become quite tense as you attempt to both case and rob the joint before the boys in blue show up.

When it comes to the police, American Fugitive does some neat stuff here too. Though the game borrows Grand Theft Auto star rating system, it goes one step further by not only allowing players to spray paint their car to throw the cops off, but also change their clothes too – the police identifying you by what you were last seen wearing and driving.

Again, this is an intriguing aspect of American Fugitive’s design as it allows players to get creative in how they lose a police tail. In one example, I escaped from a crashed car and with the police in hot pursuit sprinted across a number of backyard estates, hopped into one, stole some clothes and hitched a ride on a passing train to definitively evade my captors. It was pure Dukes of Hazzard and in this sense, Fallen Tree Games do evocative justice to that timeless, primetime TV classic.

It’s a roaring shame then that despite such well-intentioned embrace of old and new genre sensibilities, American Fugitive finds itself effectively thrown in the Hudson with a pair of concrete boots – except the boots aren’t made of concrete; they’re fashioned of poor design decisions and other flaws.

For a start, the AI is pretty abysmal. In one encounter a bunch of hillbilly types began walking towards me and opened fire, forcing me to hide behind a vehicle. Thing was, they kept shooting at the vehicle causing it to set alight, while they were just walking into it the whole time. Next thing that happens is that the vehicle blows and they all become human toast. Smart lads.

Another band of doofuses are the police. Best described as inconsistently intelligent at best, while they can track you down for various infractions and locate you by the make of car you are driving or the clothes you are wearing, you can sometimes literally ram into a cop car straight on with no repercussions whatsoever as the cop will simply just drive off.

Speaking of driving, while the act of doing it is satisfying – not least owing to a decent physics system and a dynamic weather system that affects your command of the road, it’s difficult to cut loose and really hit the gas because the camera never zooms out far enough for you to see what is coming ahead. As one might expect, the troublesome upshot of having a perspective so closely cropped is obvious – you can hit other cars, walls and pedestrians (and thus rack up your star rating) so very easily when going at speed. To say that this is frustrating would be quite an understatement.

Other issues also rear their ugly head. When you save and quit your game and then return to it later on, it doesn’t reload you exactly at the point which you saved, instead each loaded save game seemingly puts you in some random place on foot, forcing you to make the trek to a nearby car and get started again. It’s a baffling design decision to be sure.

Elsewhere, waypointing is inconsistent too. Some missions will waypoint you to exactly where you need to go, whereas others are simply content to let you find your own way. It’s a small problem granted, but it’s just one issue with the manner in which missions play out. Another, more troubling issue, is how certain objectives can just disappear.

In one example, I had to tow an ATM machine into a barn, the problem is as soon as you tow it you cannot avoid getting the four star attention of the police, and because you cannot enter the barn with that level of star rating active, I thought I could release the tow and come back for the ATM later. The problem with my genius strategy, as you can probably guess, is that when I came back, the ATM miraculously disappeared for no reason whatsoever. Again, this was teeth-clenchingly infuriating.

Though it lovingly invokes the Grand Theft Auto games of old, adds meaningful features to that template and boasts a soundtrack evokes melancholy Americana with its ponderous strings and drums, American Fugitive is just too weighed down by shortcomings and flaws to really do justice to what is an otherwise deftly crafted love letter to the crime epics of old.