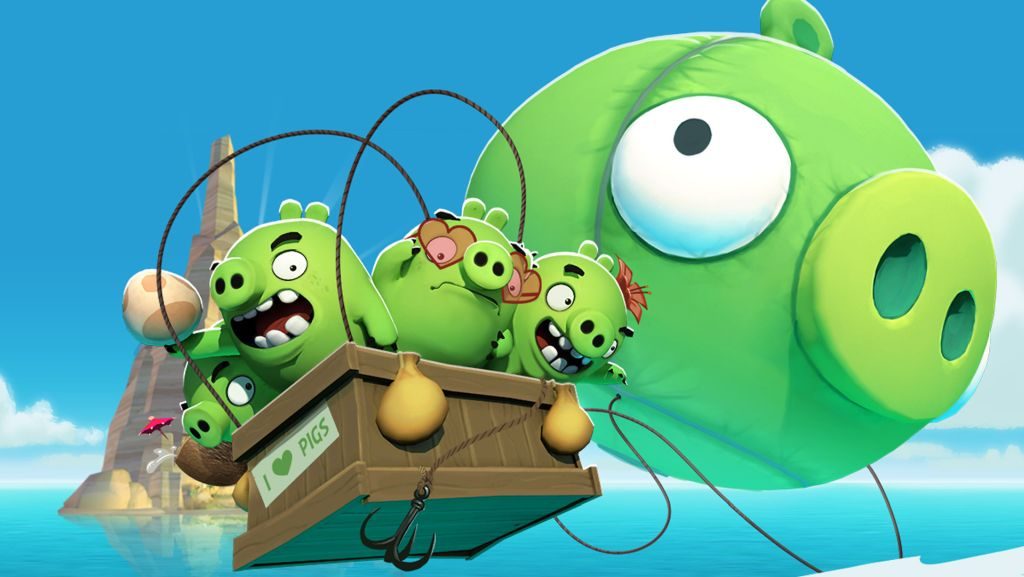 It is difficult to believe that ten years has passed since the first Angry Birds game released. In the decade since 2009’s additively playable title released, days of my life have been sucked out of my body by my iPad, spent compulsively working the same puzzles over and over again until I achieved the desired three stars. Why? Because three stars are better than two stars. Duh.

You Already Know What Angry Birds VR Is

If you have ever spent even five minutes with an Angry Birds title, you know what to expect from Angry Birds VR. Players stand in a Loony Toons world, facing a shoddily constructed structure. Perched upon the structure are a number of green pigs. The player launches a series of birds at the structure, attempting to knock it over, and in the process, kill the pigs. Because pigs are evil, I guess.

Once all the pigs are dead (provided you kill them all with the three birds at your disposal), the player is granted points and a star-rating on a three-star scale. Once you have played for a minute or two, you will realize that anything less than three stars is utterly unacceptable, and you must try each level again and again until you achieve a three-star rating (which usually means that you have to figure out how to knock the whole thing down and kill all the pigs in one shot).

The big hook in Angry Birds VR is that for the first time, players can view the target structure in 3D. You hold a slingshot in one hand, pulling back on the bird with the other to aim. Left handed? Uh…swap the Move Controllers to the other hand. Problem solved.

In 3D, you have the ability to lean around a bit, peering into the structure for hidden pigs and weak spots. Most of the puzzles have a few alternate vantage points that you can easily teleport to, though sometimes the view from those places is less than desirable. There is a huge amount of trial and error involved here, as you seek the one weak point in the structure that will bring the entire thing crashing down on the hapless piggies.

For some reason, the PS VR version of Angry Birds forces the player to stand in an area very close to the PlayStation Camera – uncomfortably close to my television, to be frank. I like to stand back further in the room for PS VR gaming, for fear that I will whack my TV while flailing around. Not an option in this case, since if you move further than three feet from the camera the image in the visor simply goes black until you move back into range. This caused me a bit of grief as I shifted around, trying to get a good angle for my shot.

I also encountered some minor tracking problems. Since the crux of the game revolves around the distance the player places between the two Move Controllers (to aim the slingshot), when the tracking loses one or the other controller, the game essentially breaks. It didn’t happen often, but when it did it was groan-inducing.

Aside from these issues, it must be noted that – graphically – Angry Birds VR is one of the crispest and clearest titles I have played on PlayStation VR in recent months. The simplicity of the cartoon graphics works well for VR, and the animation of the structures collapsing is amusing and satisfying. There is something gratifying seeing this familiar aesthetic in 3D. The enjoyment of playing Angry Birds far outweighed the technical quibbles I experienced.

A Few Hours Of Content – Depending On Your Experience Level

There are four worlds to play through in Angry Birds VR, each of which contains around 15 puzzles. All told, I would say that it took me about three hours to get through the game, though results will vary depending on how obsessed you are with the three-star thing. There are several trophies to be earned by playing the game – many of which result from those three-star ratings – so if you are a trophy hunter be ready to have your perseverance put to the test a bit.

As the game progresses, new mechanics are added at a nice pace, keeping things fresh. Like the rest of the game, there are no real surprises here for fans of the series. You eventually unlock four types of bird (though you can’t decide which ones to use – the game automatically loads your slingshot for you). The yellow bird flies fast, the black bird explodes. You know the deal. New building materials like stone and ice add some variation to the puzzles – but again – nothing out of the ordinary here.

Each world has a “boss battle” as the last level. Boss battles consist of one big fat piggie with a health bar hanging out on a structure. Direct attacks will do little damage, so the player has to figure out how to use the environment to damage the boss. Like the rest of the game, this consists of finding the correct angle from which to launch a bird. While these boss battles do break things up a bit, they pretty much follow the format of the rest of the game.

It is always a nice change of pace when you can get your hands on a “clean” game in a franchise that usually contains microtransactions. They Angry Birds games typically offer strong game-breaking weapons for sale, a way for players to strong-arm their way through difficult levels. I never understood the appeal of these items, but to each their own.

But playing an Angry Birds game that hasn’t been cluttered up with some dumb microtransaction nonsense is a nice change of pace. I don’t ever want gems or onions or whatever the hell the mobile games are usually trying to sell me, so playing the game in its pure, unpolluted form is a welcome relief.

Angry Birds VR: Isle of Pigs is exactly what fans of the franchise expect (and likely what they want). The gameplay mechanics are simple to learn and satisfying to master. The kid-friendly characters make this a great family friendly PS VR title – of which there are precious few. Angry Birds fans shouldn’t hesitate to pick this one up, and non-fans will likely find this a good title to grab on sale to kill an afternoon. Angry Birds is fun.

Angry Birds VR: Isle of Pigs delivers more of the time-tested Angry Birds gameplay that fans love, this time in 3D. With no learning curve and zero barriers to entry, this is about as accessible as VR gaming gets. Angry Birds offers a decent amount of content and a reasonable level of challenge. Some technical issues mar the experience, but the sheer fun of playing overcomes the deficit.