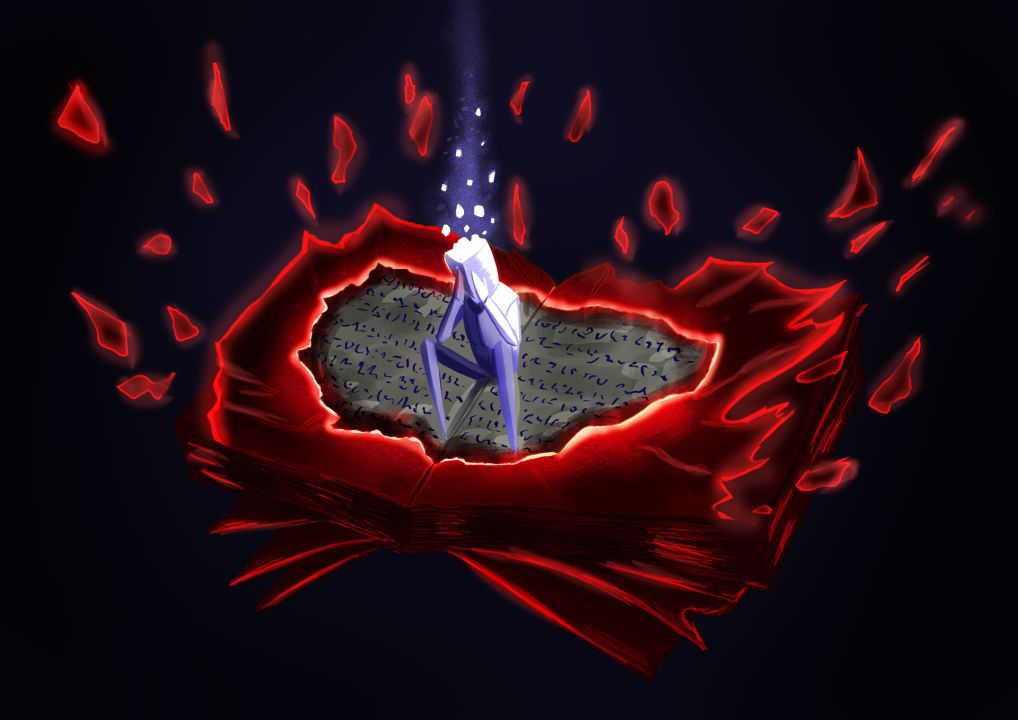 Anyone’s Diary has an interesting history. Developed by Spanish developer World Domination Project, Anyone’s Diary was developed in part because of an early version’s award winning performance at the PlayStation Talents Game Camp. After winning some awards at that event, World Domination Project went on to complete the game, which has now been digitally released exclusively in the EU PlayStation Store.

Players take control of “Anyone”, a sad-sack origami figure, and guide it though three levels set up to represent various time periods (or perhaps momentous occasions) in his/her life. Things in Anyone’s Diary get off to a good start. At the beginning of the first level, I was duly impressed by the visuals.

The world that Anyone inhabits is constructed fully of folded paper, which fades in and out of view as Anyone moves through it. Paper houses, paper streetlights, and a rather impressive folded paper park (with paper gates and fountains) all shimmer into view as Anyone wanders through them.

Using the Move Controllers, the player is able to slide the world around at will, dragging items in for a closer view and even sticking their heads into some of the paper structures (there’s not much inside). Most of the world is colored in muted tones, giving the game a somewhat somber tone. In the opening moments of the game, it is all very impressive, if a little homemade feeling.

At first, Anyone just walks forward through a variety of scenes. This is accomplished by holding down a button on the Move Controller (two buttons will make him jog a little faster). Anyone can only move forward and backwards on his predetermined path; everything in Anyone’s Diary is extremely linear.

Before long, Anyone comes to a few gaps in the scenery. He dutifully stops walking before falling in, and a tap of the Move button will send him leaping over any chasms he encounters. This continues for a while until the end of the first level.

The player is occasionally asked to rearrange the scenery to open up a path for Anyone to continue moving forward, but there is never anything more challenging than those little childhood sliding puzzles that ask players to slide numbers around in a panel until they are in order. Fun, but not terribly challenging.

In later levels (there are three), visuals become more surreal, with reddish hues inhabiting more and more of the environment. These signify dark influences on Anyone’s life, I suppose.

Along with this visual shift, other methods of manipulating the world are introduced; sliding platforms into place, turning cranks, and the like. These puzzles are all very simple, pleasant, and easy to overcome. This is not a game that is interested in overly challenging its players.

Before you know it, the game is done. My first playthrough was completed in under an hour. Once I knew what I was doing and was done gawking at the visuals, I was able to run through the game a second time in around 20 minutes (not counting time lost due to bugs).

During my two playthroughs, I ran into game-breaking bugs no fewer than six times. Anyone would get stuck on the scenery while performing jumps, particularly during the second level. Even more offensive was the fact that when I was forced to hard crash the game due to the fact that I could not continue, my save file was erased, forcing me to go back to the beginning of the entire game. While those slide puzzles are easy, they are infuriating when you are experiencing them for sixth time.

Anyone’s Diary is only a platformer in the strictest sense of the term. As a character, there is very little to make Anyone memorable (in fact, he is intended to be a stand-in for…anyone). The story points that are communicated are also very open to interpretation. I understood at one point that Anyone was being fired from a job. I have my own interpretations of the second and third levels, but I could be way off base.

To refer to the story of Anyone’s Diary as “poetic” would be one interpretation. A less kind observer might find the story obtuse. I fell somewhere in the middle. While I enjoyed the game visually, I was underwhelmed with the metaphoric expressionism on display. Frankly, I didn’t know what the hell was going on most of the time.

While completion of development on any game is a titanic feat that deserves applause, the unfortunate fact is that Anyone’s Diary feels very much like a student project. Something along these lines would be very impressive had it been made as a side project (or in Dreams, perhaps). While there are many interesting visuals on display, the lack of polish, short length and extremely simplified gameplay definitely relegate Anyone’s Diary to the “kinda interesting if it’s on sale” category.

Anyone’s Diary might be worth a look for anyone interested in game development and this game’s particular history. The visuals on display are often impressive. But for the average player, I suspect that the game’s bugs and short length will be deal breakers. When a game is regularly erasing your progress, the best intentions in the world won’t save it.