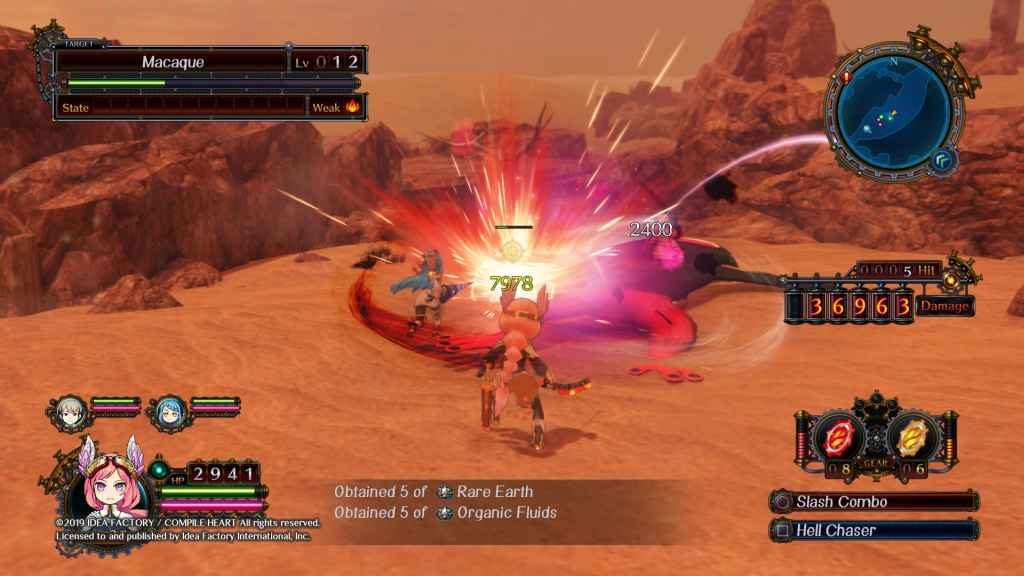 Don’t fall for the same trap I did. Don’t look at the attractive promotional materials for Arc of Alchemist, see the base-building mechanic, and be fooled into thinking that this might be a hidden RPG gem. Don’t take a chance on Arc of Alchemist, with the hope that it might fill a couple of afternoons with some nice stat-building and exploration. Don’t take the plunge and drop hard earned cash on this lemon of a game. If you do, you will be setting yourself up for bitter disappointment.

I normally enjoy a good budget-level RPG – even those little ten dollar nuggets that Kemco constantly drops into the Vita store – but this isn’t that. Arc of Alchemist is a hodge-podge of RPG tropes – with a nonsensical story, ridiculously simple and repetitive combat, and unrewarding base-building. All I have after beating this game are questions.

Arc of Alchemist – All I Have Are Questions

First question: What the HECK is going on in Arc of Alchemist? This game is so strangely structured that I struggle to put the gameplay loops into prose. I hate this game so much that I keep writing mean-spirited poetry and then deleting it. But I’m going to try to pull it together here for the sake of cohesion – which is more effort than Arc of Alchemist puts in.

Players start the game as “Quinn”, the leader of a group of…people…who are on a mission to find a…thing…that will help revive the earth – which was destroyed and turned to a desert wasteland long ago. At the same time, another team from a nearby settlement are trying to find the same McGuffin, known as the “Great Power”. Sometimes the two nomad groups meet each other and talk a lot.

When did this mission start? How did these people meet each other? Were they assembled for this mission by the faceless lord that they keep referring to? No explanation is given. Arc of Alchemist begins with the party of maybe eight playable characters already assembled. These fools are already out in the desert, wandering around and fighting enemies. Who are all these people? What are their roles in the party? Why are they all meandering around this desert wasteland?

Arc of Alchemist never makes any attempt to explain most of this stuff. For a while I thought that the game was beginning in medias res, and after a few confusing minutes, it would circle back to the beginning of the story and explain itself. Nope. Clicking “Start” on Arc of Alchemist is like jumping into the fifth season of Game of Thrones – all bewilderment and confusion about the back story, but without the cool sex and violence to keep you entertained.

Here, Sucker, Choke On Some TIPS!

Instead of attempting to show the player its numerous and complicated systems in any sort of natural or integrated way, Arc of Alchemist instead utilizes a system of “Tips”, which bombard the hapless player with endless screens of text instruction. From the outset, the game randomly starts flashing a “New Tip!” sign in the corner of the UI – which indicates that a new instructional tip has been nestled like an Easter egg somewhere in the gargantuan tip menu. It is up to the player to cycle through these existing tips in an attempt to find the new one. Have fun!

Sometimes (but not always, because that would be consistent) these tips are represented by a weird floating “Tip” icon that is found hovering in the desert – which the player must walk over in order to receive instruction.

Enter the tips menu at your own peril, as one tip often segues directly into the next, locking the player into a seemingly endless flow of instructional screens – which are sometime just text on a blank screen, with no sort of illustration or animation. In moments like these, it feels like Arc of Alchemist is taking a sick pleasure in ramming tips down the players throat, knowing full well that it is an empty exercise and no information is being retained by its choking victim.

For a game that mostly consists of jamming on the Circle button to fight the same enemies over and over, the amount of information piled on the player in the first ten minutes of Arc of Alchemist smacks of sadism. Just thinking about the “tips” system makes me itchy all over, as though the act playing Arc of Alchemist left me with a psychosomatic case of scabies.

What Are All Of These Systems?

Another question: What is the point of anything in Arc of Alchemist? The labyrinth of pointless busy work this game heaps on the player is simply mind-boggling.

Here’s how the game goes (without a ton of detail, because it would take forever): Players wander an enormous empty wasteland in a party of three – Quinn and two useless chumps. Though you have eight or nine characters to choose from to fill the “chump” roles, the game never offers any compelling reason to switch them out, so I just stuck with the first three characters the game defaulted to. Seeing as how it takes resources to level your dudes up, I couldn’t see any point in wasting my money on alternates.

Anyhow, you wander around, filling out the map and reducing the fog of war. Enemies appear, and you kill them by jamming on the circle button. (Another attack is mapped to the square button, but it is mostly slow and useless). Most of the time, you are insanely over-powered, so most battles are over in around one second (this is not hyperbole – I literally mean one second). Your two chumps leap into battle, but most of the time you can’t see what they are doing because the camera makes no compensation for the fact that you are “controlling” a party of three.

Character levels go up with blinding regularity, but it is unclear what – if anything – this means. After a while, you will get bored killing monsters and battling, so you will dip back to your “base” using one of the many travel points scattered about the desert. Doing so will invariably subject you to a static cut-scene, where pointless conversations attempt to flesh out the characters. This is a nightmarish torture, as the game has done nothing to establish these characters. It’s like listening to strangers talk on an endless subway ride.

After the torment/character development ceases, you can dig into a variety of menus, most of which involve you selling the goods you picked up in the desert and using the profits to buy stuff. You can spend money to ramp up your party’s stats, buy new weapons, or build stuff on your base. A lot of the time at your base is spent scrolling through unintuitive menus, trying to decide what to spend money on – an empty, depressing activity.

I’m unclear what working on the actual “base building” gains you in terms of gameplay. I did notice that adding structures to the base occasionally caused new weapons and armor to show up in the store, but that was the only benefit I could discern.

Beyond that, its just “build this” and “shuffle this stuff around”. There is a particularly stupid system that has players purchasing a building on one menu, then going to another entirely unconnected menu to place them on a map. If you are unfortunate enough to have already purchased Arc of Alchemy, keep futzing around – you’ll eventually stumble on how it works. Or you could brave the “tips” (Choke on them! Let Arc of Alchemist listen to you gag!)

When you are done fiddling with the menus (or you run out of money), you warp back out to the wasteland and fight more monsters. Wandering far enough sometimes opens new areas (which look exactly like the old areas), so you can stagger around there if you like. Occasionally, the game surprises you with a boss creature, who will wipe your entire party in moments, leaving you confused as to what happened (enemies spawn in from out of nowhere). Maybe after that, you might want to go back to your base and sell some crap and buy better stats or something.

I suppose that it could technically be possible to set an entire game in a desert wasteland and have the result be visually interesting. But when wracking my brain to come up with adjectives to describe Arc of Alchemist, “interesting” doesn’t really come into play. “Drab”, “boring”, “empty”, “lifeless”, “depressing”; these are the descriptors Arc of Alchemist seems to be going for.

And you know what? We’re done here. I’m not going to waste any more time describing the graphics in this game. Just thinking about it puts me in a foul mood.

I’m not going to talk about how the game wants you to spend resources establishing remote “camps”, when the transport points that can warp you back to town to accomplish the same stuff are literally two steps away.

I’m not going to rant about the way floating “event” icons trap the player into watching cut scenes – and due to the spacing of these icons, scenes that purport to take place weeks apart can be stumbled upon within seconds of each other.

I’m not going to talk about the creepy quasi-sexist character design, or the irritating voice overs, or the fact that nothing in this goddamn game makes a lick of sense. I’m just going to tell you flat out that you should not play this game under any circumstances, and be done with it. Arc of Alchemist isn’t worth your time, and it isn’t worth any more of mine.

Arc of Alchemist is now available on the PlayStation Store.

Arc of Alchemist is not technically broken, which is the best thing I can say about it. Combining the most basic combat, the most complicated menu system, the weirdest economy, some pretty poor PS2-era graphics, and the densest, most indecipherable tips section, Arc of Alchemist is indeed reminiscent of a work of alchemy – if said alchemist was attempting to turn your valuable time into dust. Avoid at all costs.