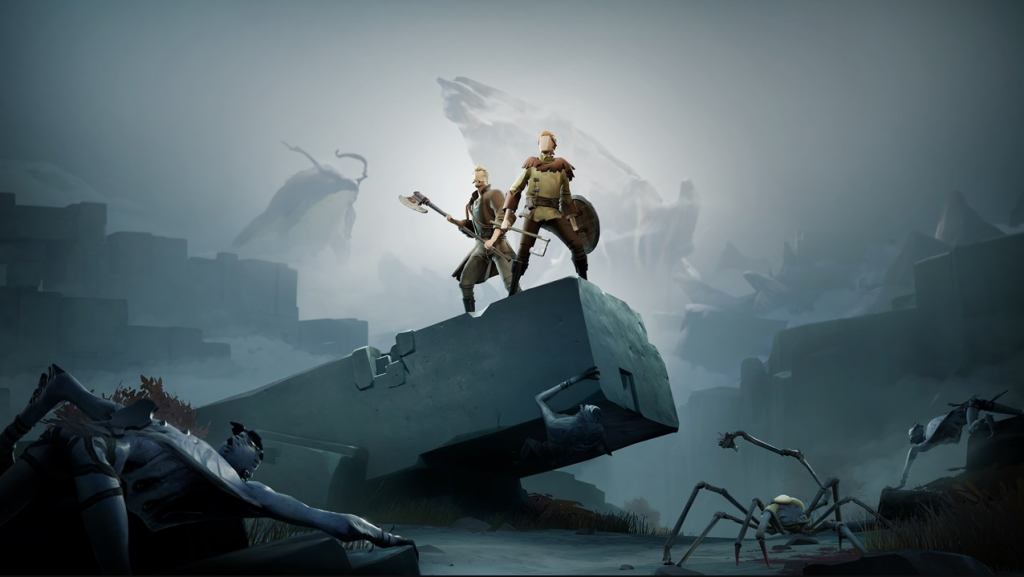 Throughout the twenty hours I spent with Ashen sat in my chair in my bedroom I kept doing one thing: telling myself how it reminded me of playing Bloodborne for the first time again. Ashen borrows a lot from the souls-like genre.

But, A44 has been able to do something very few games like Ashen have been able to do. They have captured the mysticism and ambiguity that makes FromSoftware’s games so marvellous and translated that into their own world, with unique characters and lore. And, as I rolled the credits on Ashen I felt like I had just experienced a fresh breath of air in a genre that has seen many games fade into ash and obscurity.

Ambiguity Is The Answer

You are a lone wanderer in a land where natural light is virtually non-existent, except for the small flashes of it that appear from The Ashen, mystical winged creatures who explode in a flash of light sky covering the land. From there, you forge relationships with other players and a number of NPCs and embark on a journey of discovery.

Ashen is a game that doesn’t explain much about its world to you initially. Much like Bloodborne and Dark Souls, you are thrust into its arms and expected to accept that not everything will be explained to you. When the game progresses, small nuggets of information are dolled out every now and again, but the narrative of the game isn’t exactly spelt out in black and white.

By leaving a lot of the concepts and ideas in Ashen intentionally vague, A44 masterfully emulates what made the Dark Souls games so special in the first place. In Ashen you are dropped into a world and given agency over your discoveries, picking up information through the environment and subtle dialogue cues.

This leads to a gratifying sense of slowly learning organically through your own decisions in-game and is bolstered by the fantastic voice acting. Each character is excellently written and voiced, with their tone and timbre fitting the mysterious world A44 have created and each individual’s personality and background. They can all feel like a genuine friend (or foe) as you follow their journey throughout the game.

Ashen also features some great atmospheric music and sterling sound effects that help add to the hauntingly mystical atmosphere of the game. Throughout playing, I felt like I was sinking deeper into the mythology and world of Ashen and becoming more and more engrossed as my playtime increased.

Familiarity With Its Own Identity

Ashen’s combat and gameplay borrow heavily from the aforementioned Dark Souls with tough enemies and a punishing, yet fair, stamina meter. You have access to one-handed weapons, two-handed weapons, a shield, throwable spears, and a whole host of consumables that provide buffs and bonuses. The controls are almost identical as well.

But, this isn’t a bad thing as those systems work well with the more open and varied environments in the game. Instead of tight compact areas, Ashen is mostly composed of larger, open sections split up by smaller, tighter intersections. Thanks to the smart and strategic enemy placement I found combat as enjoyable as the best in this genre. I was able to slowly progress through an area sweeping each hill, field, and building one by one.

For the most part, I didn’t feel swarmed by enemies too often and found the cycle of killing everyone in an area and moving on to be rewarding thanks to the loot scattered throughout the dilapidated structures and desolate fields and the weighty combat.

It isn’t a flawless experience as one of the later areas of the game suffers from the problem all souls-likes suffer from. The ‘let’s put too many enemies everywhere’ issue that leads to a frustrating moment of having to run past hordes of grunts and subsequently working your way through a level in reverse, pulling enemies one by one in order to survive.

For the most part, I also found the diversity in the environments to be one of Ashen’s strongest features, with the game shifting from ash-covered hills to a fog-filled tundra that blocks out sunlight to a ruined city in broad daylight. I particularly enjoyed an eerie and dauntingly dark underground labyrinth in the middle of the game that is a stark contrast to the open and bright areas before and after it.

Of course, you can’t mention a souls-like without talking about bosses and Ashen’s are mostly good. The bosses here are not the spectacle or showcase of unstoppable skill you would find in a Bloodborne or Dark Souls, but they are a nice way to break up the open-world structure of the game and a welcome change of pace.

Some of them are challenging, but one or two of the five in the game are complete pushovers and a bit boring to fight due to how simple their mechanics are. However, even with this caveat, they all look incredibly unique and show off some of the more creative and striking imagery Ashen has to offer.

Tweaking: Some Good And Some Bad

A44 have also put a few tweaks and changes to the traditional souls-like formula and the results of those alterations are mixed. Over the course of the game, you build up a town called Vagrant’s Rest from nothing, brick by brick and pillar by pillar, until houses and staircases begin to form in the late-game. I loved this sense of visible progression and being able to tie your achievements to something tangible.

Vagrant’s Rest is also where the characters you meet along your journey return to and serves as a hub for you to pick up quests and upgrade your equipment. Each of the ten or so characters has their own questline from major story-related tasks you get from characters like the fatherly Bataran to smaller personal quests, such as finding Jokell’s father. Along with the map, I loved that each character’s quest progression was shown in the menu allowing me to track my progress with everyone and I would love to see both of these features A44 have introduced adopted by other souls-likes.

A lot of the typical RPG features here have also been streamlined. Upgrading gear and armor remain intact, but instead of choosing a class or specialisation you can choose four perks and an active ability to equip, allowing you to tailor your character to your playstyle. These ranged from increased health and stamina to dealing bonus damage upon successful hits.

I found this simplification to fit well with the smaller experience Ashen offers and it felt nice to play a souls-like and not be drowning in items I never used and endless descriptions of gear that I am under levelled for.

However, being free to choose whatever weapon you want isn’t exactly practical. After one or two upgrades it becomes practically pointless to switch to newly discovered weapons, as my existing armament dealt far superior damage on account of the materials I had already invested into it.. This problem persists into the late-game with equipment not scaling and always remaining at a similar base level.

I also found the inability to sell any unwanted gear or items to be extremely tedious. As I had to either abandon this piece of loot I went searching for, or place it in my storage box where it would sit never to be touched.

Familiar But Fresh And Exciting

Ashen takes the atmosphere and mystery that gave birth to the souls-like genre and successfully embeds that into the foundation of the world, lore, and gameplay. The world-building and ambiguity of Ashen is persistent throughout the twenty hours, five or six environments you explore, and five bosses you fight.

Its additions and changes to the genre are mostly positive and boasts evolutions that should be adopted by other developers to help bolster their own offerings. The open levels and ability to track progression feel like the next step forward for the genre. Ashen is an engrossing and fascinating experience and the biggest breath of fresh air the souls-like genre has seen in years.

Ashen is available now on PS4.

Ashen is one of the best souls-likes around and its quality matches that of the games that gave birth to the genre. The mystery and lore help to build a fascinating world that excellently complements the open and varied environments and strange, contorted creatures you will fight in them. A44 have provided a big breath of fresh air in a genre desperately in need of reinvigoration.