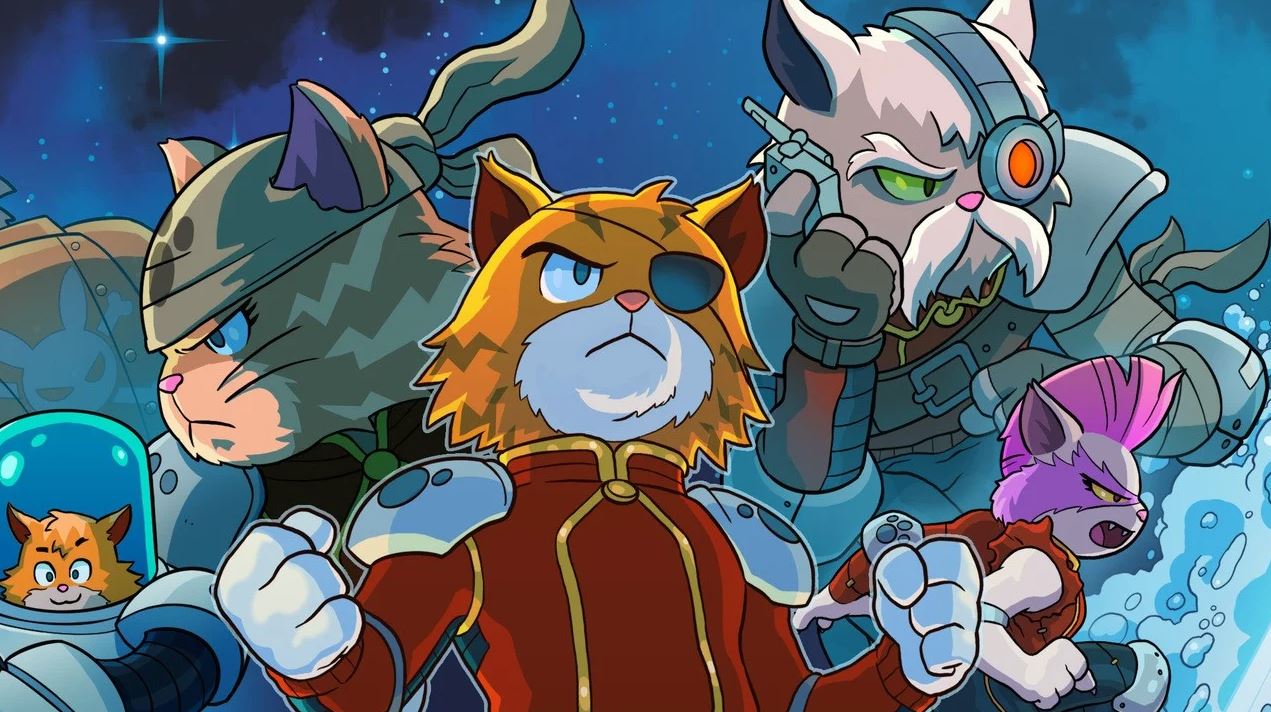 Astro Aqua Kitty PS Vita Review – Seven years ago, Aqua Kitty: Milk Mine Defender DX entered the scene with its shooter style gameplay and fun antics. Now the same team behind Aqua Kitty, Tikipod Studios, brings a sequel into the fray, called Astro Aqua Kitty. Astro Aqua Kitty promises to add RPG elements to its established shooter formula. While these RPG elements are present, nothing gets in the way of this game being an enjoyable shooter first and foremost.

Kitties To The Rescue

The feline fleet stops on the edge of a dwarf star to mine crystals and water before moving on (this might sound abrupt, but this is literally the opening moment of the game). Upon arrival, the fleet comes across different hangups that you have to help them overcome while still seeking out crystals and water. You then choose one of four different pilots and one of four different engineers to operate your ship for each playthrough. All the unique ship occupants have their own active and passive skills, so combining them for different runs adds a little replay value but not the kind that will keep you coming back strictly to try them all.

Skills are not available at the onset either. In order to unlock them, you must level up your ship. Each level up grants a skill point that you can apply to one of the ten skills shared between your engineer and pilot. Levelling up takes a while, so these skill points are scarce. To make things more challenging, you can only have four skills active at any one time, but you can change them at dock points. 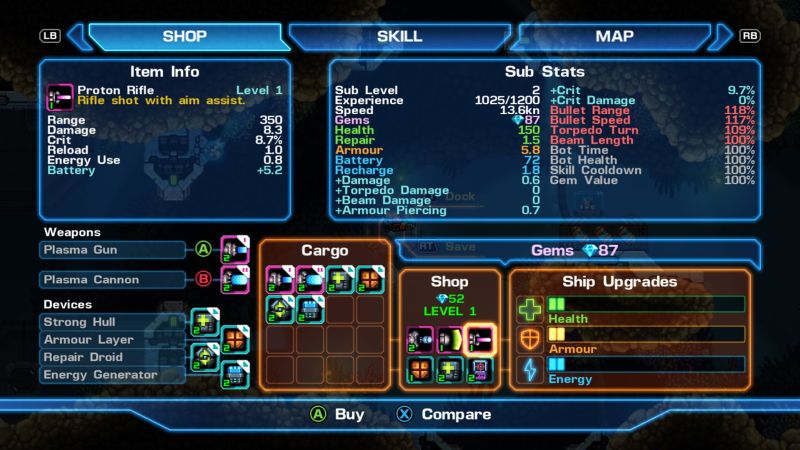 Scattered throughout each zone are dock points, which are used to save, regenerate your health and energy (energy is required for some weapons), and adjust your loadouts. Since the game doesn’t auto save, these docks become crucial to your success creating a neat risk/reward dynamic in the process depending on how long you want to stick it out. As you go along, crystals drop from destroyed rocks and slain enemies, and they act as the game’s currency. These are used to level up your three stats (health, armor, and energy) as well as buy available weapons and devices from the in-game store, which are also found at the docks.

In fact, the game demands that you often juggle your options, because what works on one level won’t work on the next, and that carries into weapons and devices for your ship. For instance, you can find all kinds of different weapon types, like Poison Shot or Proton Orb, each having strengths against certain enemies. Devices also enhance your three stats or strengthen weapons, so it’s up to you to explore which ones work best together. The entire game CAN be played with the same weapons, if you so choose, but it’s going to suck if you do so.

A Wonderful Blend Of Genres

The coolest part about the game is how it combines Metroidvania elements with mechanics from shooters like R-Type or Sine Mora. The shooter elements are used far more liberally, but the map exploration features from Metroidvania-esque games play well into it. You unlock some areas and shortcuts as you find items and defeat specific bosses, but it’s never too complicated and requires only minimal backtracking. The focus of the game is the shooter element, but there’s just enough there from the other classical inspiration to keep the Astro Aqua Kitty formula engaging. 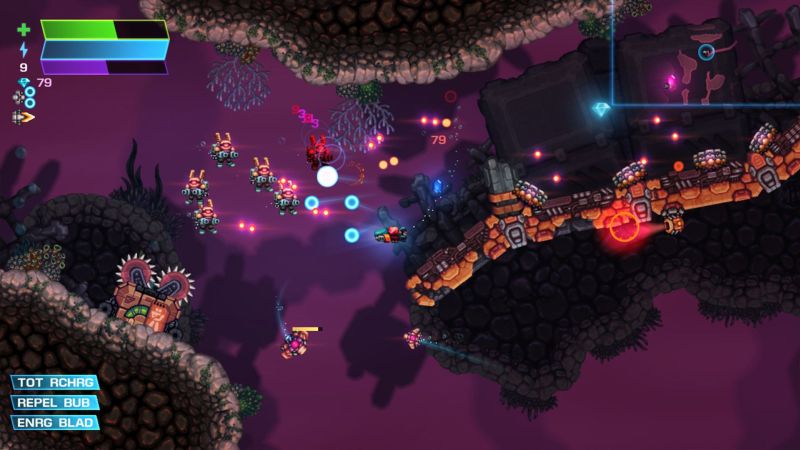 The soundtrack accompanies the game beautifully also. None of the tracks are award winning by any means, but they are all catchy and never get old. Astro Aqua Kitty’s sound effect work is audibly tactile as well, invoking sufficient cartoon style charm to underscore the game’s whimsical presentation. Your pilot even meows every time you pick up a health or energy refill, and it’s just adorable.

The game’s aesthetics do the job that the game requires. Nothing is inherently impressive, but the overall looks keeps to the universal shooter aesthetic. Colors differentiate well and objects never share similar hues, so it’s easy to discern enemy projectiles in the heat of things. All of the zones could look more unique from each other however, especially since the game only has eight, but this isn’t enough to diminish the overall presentation.

Boss fights offer their own challenge, but that challenge is highly dependent on your preparation. If you have a loadout that doesn’t play to the weaknesses of that particular big bad, then you’ll be pecking away at it for a long time. I bring this up because an entire level can be cleaned through with one loadout, but each boss demands an entirely different setup to effectively dispatch it. 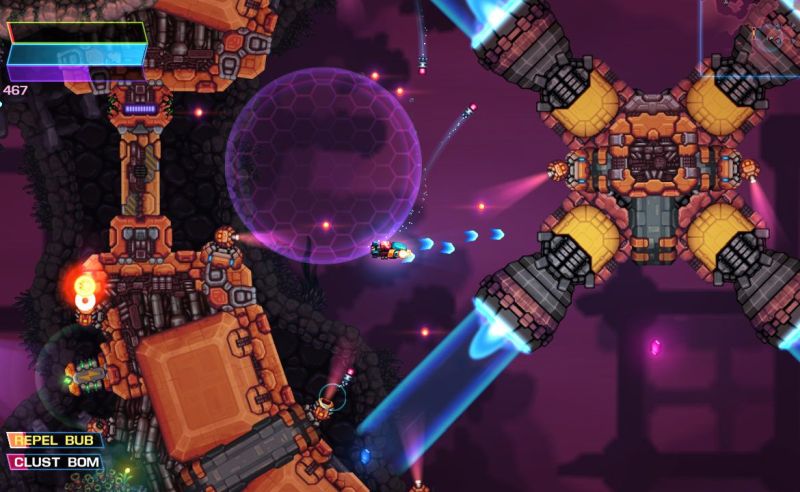 This isn’t always the case, though. Boss fights are inherently enjoyable with just enough challenge naturally built into them without asking for much more than the lessons learned from the level that preceded the fight. You might just be there for a while is all.

A similar discrepancy occurs at the beginning of each level. You’ll jump into a new zone with your previous loadout and must make your way through enemies that aren’t obliterated by your setup, making each level start a challenging prospect. If each level began with a dock, this wouldn’t be an issue, but none of them do. It’s a short-term inconvenience as, but it occurs at the beginning of each of the eight zones, so it cannot be ignored.

Finally, you use the left trigger to switch your ship’s direction from left to right. After a while, this becomes a natural part of your playstyle. However, when things start getting crazy, having to think about changing directions doesn’t always happen naturally. Ultimately, I love having control over which direction I’m facing, because I was benefited by having that ability, but I have to wonder if there was a better way to do it. 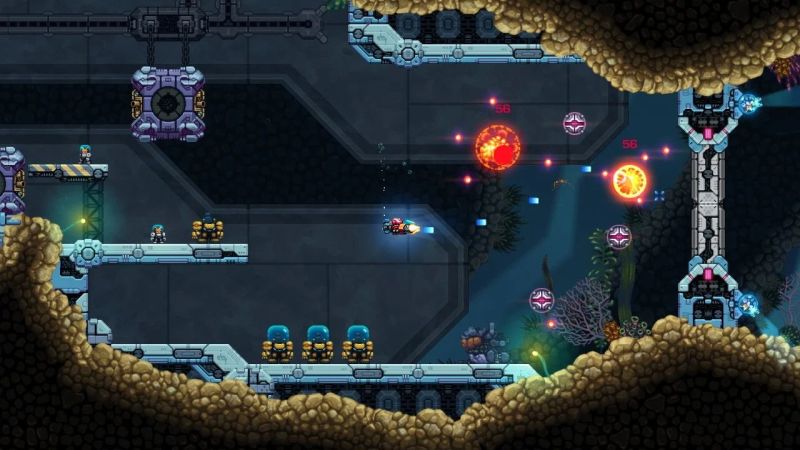 Ending The Vita On A Positive

It breaks my heart to say that such a charming game like Astro Aqua Kitty is of the final games releasing on the PS Vita, but this is a strong entry to go out on for Sony’s forgotten handheld. The shooter elements blend well with the Metroidvania-lite nods, and gameplay demands just enough to challenge you while still moving forward.

Different levels could look a little more unique, dock locations could be placed better throughout the game, and the left trigger directional switch takes some time to get used to. Outside of those few issues, Astro Aqua Kitty brings a title to the Vita one more reason to hold onto it for as long as you can.

Astro Aqua Kitty is available now for the PS Vita and PS4.

Astro Aqua Kitty adds some Metroidvania-lite elements to the shooter components of its predecessor, Aqua Kitty, and it's all the better for it. A few decisions keep this from being an instant classic, like similar-looking zones and limited locations for loadout swapping, but nothing inherently gets in the way of the good times that Astro Aqua Kitty puts in front of you.