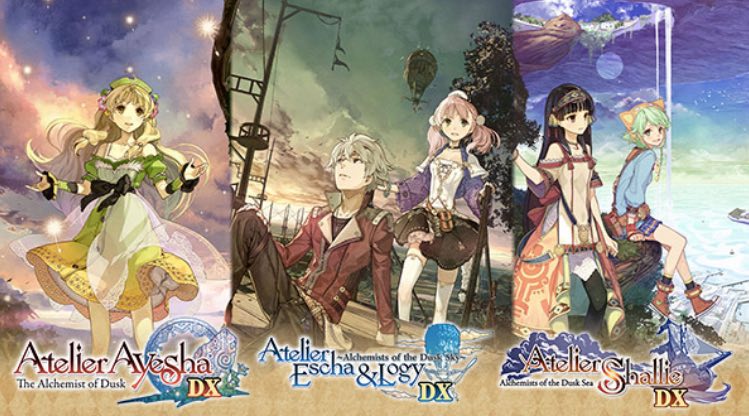 If you’re a newcomer to an IP such as this, when a JRPG series like the Atelier franchise stretches into 21 main instalments (and that’s not including an almost equal number of side stories and spin-offs), it can be exhausting prospect, even in theory, to decide where to begin. Thankfully then longtime series developer Gust and publisher Koei Tecmo have conjured into existence Atelier Dusk Trilogy DX – a deft remastering of a trio of the franchise’s PS3 outings, and in doing so, has fashioned a superb entry point for folks new to the IP.

Wholly intact, each of these games boast a common set of improvements such as higher resolution 1080p visuals, a fast forward command to get you through cutscenes and exploration areas quicker, a run command and all the DLC released to date each title. In short, what you’re getting with each title on PS4 is the definitive version and arguably the best way to play these often overlooked PS3 JRPG classics.

Though it’s certainly pleasant enough to have these three titles around again with a new lick of visual paint, it’s fair to say that an uptick in resolution aside, we’re hardly looking at dollops of transformative polish here. For example, texture and geometry detail would appear to be hardly improved over the last gen versions of each game, while keeping the framerate locked at 30 frames per second would also seem to be an ultra-conservative measure given that the PS4 could certainly push the envelope in that regard.

Humble improvements aside, the mere fact that these games are now available for a new generation of PlayStation gamers to enjoy is reason enough for its existence. Let’s make no mistake here – each of these titles are great JRPGs in their own right that provide ample and effective introductions to the Atelier series at large. Likewise, it’s perhaps a little too easy to understate the sheer amount of game you’re getting here. With each title well capable of dishing out more than 50 hours of gameplay, there’s certainly plenty to do.

Set in the common scenario of the Dusk setting, where the art of alchemy is nowhere near as prolific as it is in other Atelier settings, each of the Atelier titles in the trilogy follows the same basic structure of exploration, combat, functional character progression and the unfurling of epic narratives against the backdrop of classically cel-shaded visuals. That said, there are some differences which help to meaningfully separate the titles from one another, making them commendable genre offerings in their own right.

Atelier Ayesha: The Alchemist of Dusk (The First Title In The Trilogy)

In Atelier Ayesha: The Alchemist of Dusk, players take control of the titular Ayesha, who from the humble background of a herbalist, must pursue her missing sister Nio who has disappeared under mysterious circumstances. More than just narrative dressing, the plot actually feeds directly into the game itself from a mechanics perspective, as Ayesha frequently writes diary entries on her progress to discover her missing sister, alongside how her mastery of alchemy is coming along.

Like just about every other Ateiler game released to date, Atelier Ayesha places a premium on crafting through alchemy, as the player is able to fuse items together to create unique weapons, armor and other items. Beyond that, Atelier Ayesha also leverages the turn-based combat seen in other games within the series, albeit in a fashion that offers little to the genre. Nonetheless, it’s truly in the story that Atelier Ayesha shines and as such, players after a solid JRPG with an emotional and grand story will find much to love here.

You can read our original review of Atelier Ayesha: The Alchemist of Dusk here.

Atelier Escha & Logy: Alchemists of the Dusk Sky (The Second Title In The Trilogy)

Taking place some four years after the events chronicled in Atelier Ayesha, Atelier Escha & Logy immediately separates itself from its predecessor by allowing players to pick between two different protagonists from the off. From here, as either Escha or Logy, freshly admitted alchemists of the Twilight Land’s R&D division, players set off into the world to help people who are still recovering from ‘The Dusk’, an apocalyptic event that has afflicted the entire planet.

An expansive crafting and combat focused JRPG, Atelier Escha & Logy increments on the crafting mechanics of previous games through the employ of a new Synthesis system, that allows both Escha and Logy to combine and craft different items with varying results. Though the narrative remains mostly the same irregardless of whichever character is chosen, there are special events and endings that are unique to each character, helping to bolster the game’s longevity in the process.

You can read our original review of Atelier Escha & Logy: Alchemists of the Dusk Sky here.

Atelier Shallie: Alchemists of the Dusk Sea (The Third Title In The Trilogy)

The final title in the Atelier Dusk series, Atelier Shallie once more allows players to choose between a pair of different protagonists and again, depending on that choice, a number of different bespoke events and endings are then made available to the player. Arguably one of the largest Atelier titles to date, Atelier Shallie boasts frankly massive fields that in turn dovetails in the game’s much expanded alchemy system, allowing players to mix and create a far wider and more varied degree of craftables than has been seen in the series before.

Perhaps the biggest addition to the series that Atelier Shallie brings is the new life task system which requires players to perform particular tasks at specific times during the day, and can improve or reduce their performance when it comes to gathering items and exploring new areas in the world. Where this new system is especially notable is in how it dynamically adjusts itself to the playstyle of the player.

For example, those players who spend a great deal of time in combat will have tasks built around that, while those who spend much of their time crafting and mixing raw materials, will instead have life tasks built around that style of play instead. Though these tasks can are a touch imbalanced in terms of how they can dole out rewards that can make your character overpowered early on, they ultimately add a lot of variety to a game which already puts it stamp as one of the better JRPG’s that money can buy – even now.

You can read our original review of Atelier Shallie: Alchemists of the Dusk Sea here.

Handsomely made JRPGs that have been given modest licks of paint to bring them up to date, each title within the remastered Atelier Dusky Trilogy represents a delectable serving of JRPG bliss that newcomers and genre stalwarts alike will thoroughly enjoy. However, for players who have already experienced these top-tier JRPGs, it will only be the truly hardcore that will return to them simply on account of how slight the improvements over their last-gen counterparts are.

Atelier Dusk Trilogy DX is set to release on PS4, PC and Nintendo Switch on January 14, 2020.

An attractive trio of JRPG titles given a new lease of life with polished audiovisual presentation and a range of quality of life fixes, there's no better entry point to the Ateiler franchise than this highly enjoyable trilogy for newcomers. However, previous players of these games will find little to return to them as the range of improvements are ultimately meagre.