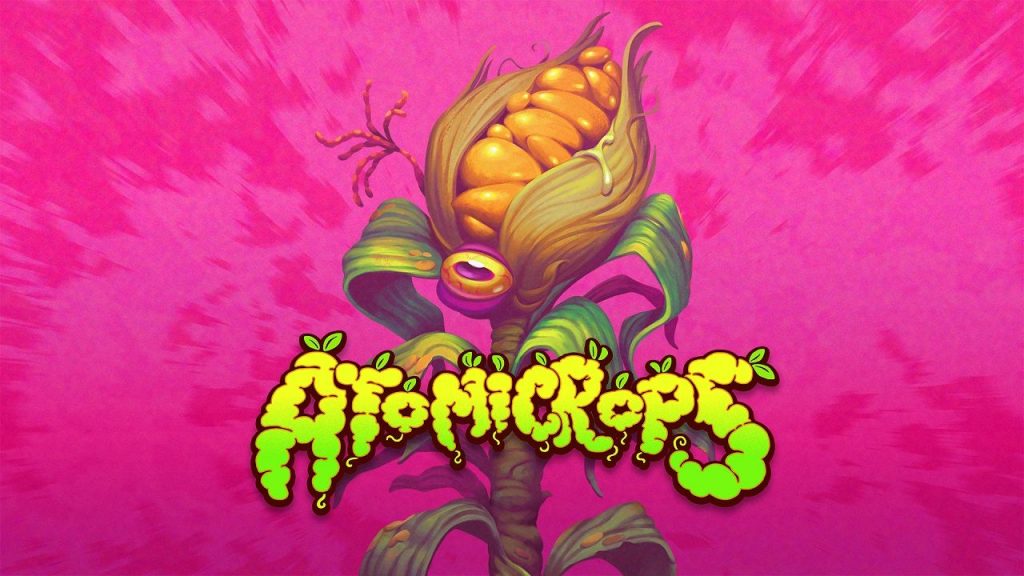 Farming, roguelike, bullet-hell twin-stick shooter, pixel art, has someone been peeking at my Christmas list? I have had my eye on Atomicrops ever since Raw Fury released the quirky looking game on PC in early access last year. Since then, this intriguing title has had a multitude of updates, tweaks and content drops. But now, the game is available on the PlayStation 4. On the surface, this game looks like everything I would want in a small indie title I can revisit over and over again but unfortunately, it does not quite hit the high mark I expected it to.

In Atomicrops you collect seeds, plant them, water them and nurture them for profit. Unlike titles like Stardew Valley though, you must take up arms and shoot crazy mutated creatures in the face who are trying to destroy your livelihood. What has the world come to when a man cannot just tend to his land without being bothered by blood-thirsty slug maniacs? Well, it is a good job you can use your profits for buying weapons, upgrades and other means of defending your well-tendered plot of land.

Why is your farm being attacked every day by all sorts of uncanny beasties? Well, there was a nuclear explosion that caused a lot of creature mutations. Of course, it was. What else would it be? It’s not only the enemies that have mutated, your crops have a life of their own too but are not hostile towards you. You must use tools, animal helpers, love and hard work to survive this post-apocalyptic world and try and turn a profit against all odds. It’s certainly a strange premise but it certainly works as a roguelike title.

After a small and very light tutorial, you are thrown straight into your farming plot with nothing but four seeds to start you off. You are then left to find out how the systems work for yourself and how best to tackle the game’s strange, yet entertaining gameplay loop. One button does most of your farming chores but unfortunately, it leads you into a few weird control issues. Sometimes I would fill the incorrect space or plant seeds in the wrong location. It is not a deal-breaker by any means but I went through a small adjustment period to get over the weird controls initially. A small refinement to the controls would have gone a long way.

Along with your plot of land, each game you start has various biomes to the North, South, East and West of your farm’s position. These various, wacky locations can be explored during the day and can be pillaged for seeds, upgrades, tractors and an all manner of procedurally generated loot. Each biome has small camps dotted around the area. Once you have killed all the enemies in the small camp the loot held within is yours. You will need to be careful with your time through, at the end of each day your farm will be attacked by waves of enemies and even large, ominous bosses.

Each day is a balancing act between farming, searching for loot and then protecting your plot of land you have worked night and day to build. To be really successful it is best to multitask, you can farm and shoot simultaneously so you should use that to your advantage and save time. I found that after exploring and killing for loot, tending to your farm and holding off attacks could be done at the same time at the end of the day. It did get manic, don’t get me wrong but using this method provided me with the most success and gave me an easy to follow daily agenda.

After you have defended your plot of land you are taken by helicopter to the game’s hub, this is where you will spend your various currencies on weapons, upgrades and even find love. Find love? I know, it is a weird game system but in the hub there will be 2 NPC’s you can woo with roses you have grown on your farm. These characters provide bonuses and skills the more you upgrade your relationship with them and will eventually lead to marriage. If you are not one for being tied down, you can also spend your roses on other things, as you can your hard-earned cash.

Should you buy a better weapon to help with your exploring and defending? Should you buy seeds to plant so you don’t have to explore too much? These are questions only you can answer but you must also be malleable and be able to change your approach on-the-fly. If you are low on health it may be worth using your roses to buy health instead of wooing a potential marriage partner. Maybe hold back on the exploring and just tend to your farm. There are multiple ways to succeed at Atomicrops and I found the gameplay on the whole, enjoyable.

On the visual side, Atomicrops is a nice looking game. It’s got a quaint 90’s Saturday morning cartoon look to it and I really like it. Pixel art is not everyone’s cup of tea but it’s well done here. The music is quite average and repetitive but it’s not too distracting or bothersome. When you are in the thick of it, when you are killing and farming, you do not pay that much attention to the music anyway. The music and graphics do fit the feeling of the game and it all works together quite well.

Unfortunately, Atomicrops performance is really poor. I want to enjoy the game, uncover its secrets and revel its procedurally generated goodness. Instead, I am fighting against a bad framerate, frame hitching and bouts of slowdown. It is not even rare either, it happens a lot. It really shows its teeth when you are fighting bosses and are involved in massive shootouts. The screen can be filled with bullets and avoiding them is paramount; but, when the framerate is all over the place it makes it very hard to avoid them and I lost so much health and so many runs were ended due to performance issues.

Fortunately, the developers and Publisher are aware and have stated on Twitter that they are working on it. I have to review the game as it is now though and cannot wait for the inevitable patch to be released. Is it nice to hear though, if the performance issues can be quelled then Atomicrops can be a fun game, even with its weird control scheme. I may return to it in the future when the issues are sorted but for now, the game is just too hard to enjoy. It is too difficult to progress and makes exploring, combat and defending your farm too much of a slog. It’s a shame.

Unfortunately, I would Wait

I like Atomicrops, I really do. Minor control frustrations aside, it has a nice mix of farming, shooting, exploration, roguelike upgrades and loot. Like the best roguelikes, each run is different, with unlockable characters, permanent upgrades and a massive amount of tools, animals, tractors, camps and enemies There is a lot to see and do. It just really frustrates me that the game launched with constant performance issues.

If you are in the market for a unique roguelike with farming and bullet-hell elements then Atomicrops may be your jam. I would just wait to see if the performance issues get fixed before pulling the trigger. In the meantime, there are a lot of other great roguelikes out there to tide you over until the game is patched. The game may even be on sale by then and save you some cash. It’s a shame when games get released in this state and I am not sure how a game gets released that performs so badly but there you go. Colour me disappointed.

Atomicrops is out now for PS4.

A fun gameplay loop, nice exploration and roguelike elements are unfortunately ruined by poor performance. Atomicrops is too much of a slog to get through and the framerate issues mar what could be an enjoyable game. Where precision evading and dodging are required, so is a good, smooth framerate. This title is hard to play in its current state but if the promised performance boost comes to fruition, it may be worth a revisit in the future.