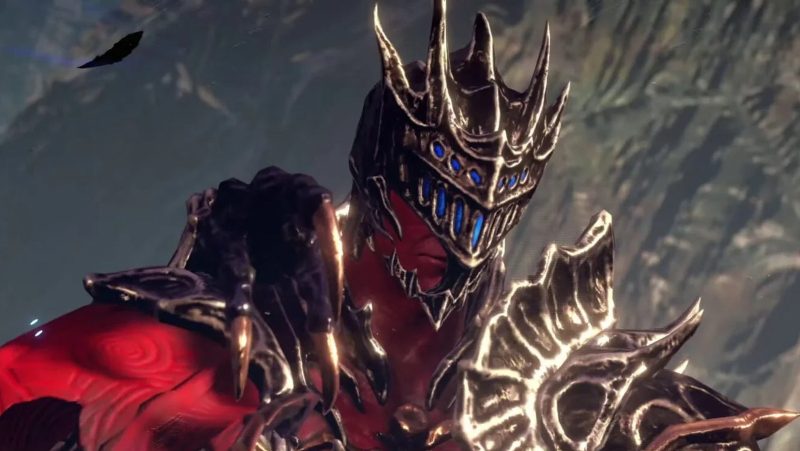 Babylon’s Fall Review (PS5) – A live service game from developer Platinum Games isn’t exactly what you may expect to get from the Bayonetta developer, but it’s what we got with Babylon’s Fall.

And what we got in Babylon’s Fall is, well, not much of anything. A poor effort at best, with a graphics filter that more often than not shows off the game in the worst light, although the cutscenes will have you questioning which actually looks worse.

The combat can be fun for a time, though it’s repetitive nature quickly turns to a boring grind. 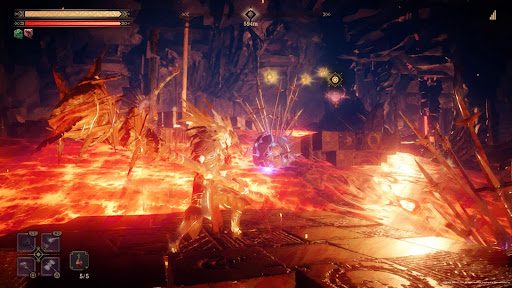 The main issue with the graphics is a terribly unfortunate water paint filter over everything. It works at times, giving environments an artistic flair and it’s own unique look.

But for the majority of the time, the filter just highlights the poor texture work throughout the environments, and particularly on your armour – it just looks horrible.

Things with feathers and a lot of details can just end up looking like a smudgy mess from a distance, and even worse somehow when you zoom into the game. The cutscenes however, are another story.

I’m not sure how, but at least for a lot of the earlier cutscenes, the gameplay somehow looks better then the cutscenes do.

The game is mostly zoomed out in its camera view due to the gameplay, but once the designers decide to zoom the camera in for cutscenes, it really shows off how bad the facial animations, textures, and environment can look.

Games aren’t just about graphics, but they’re part of a game’s first impression, and it’s not a great start when the introduction cutscene looks like something from two generations ago. 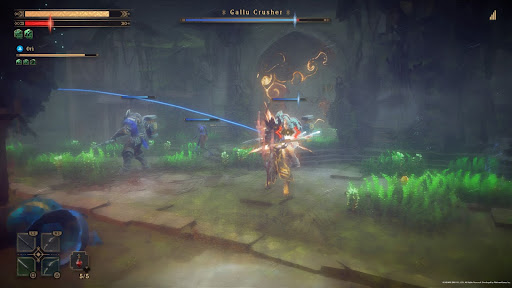 As I said, the water colour filter can have its moments, but when you enter some levels it becomes a confusing mess of filters and effects. This is especially exasperated in underwater levels.

Not only are these frustrating because they slow down the combat, the underwater filter can clash with the water paint filter to make some incredibly hard locations to see.

It really made my gameplay experience just horrible, I actually had to take breaks after levels that involved underwater sequences because it was starting to give me headaches.

But again, credit where it’s due, because there are scenes later on that look gorgeous, and the water colour paint style almost starts to make sense.

Particularly when it’s an open and outdoors location. The lava cave also looked really pretty, but the big issue is these moments are too far apart from each other, and instead of saying ‘wow’ I’m more often saying ‘please just stop’.

Graphics though aren’t the only thing that’s problematic in Babyon’s Fall. The environment would also be its own issue, as areas that required you use a light source made combat plenty more tiresome.

It also didn’t help that the orbs of light which annoyingly take the place of your spectral weapons while in use don’t even light up the environment well. I still greatly struggled to see.

We Climbed Together! Or Perhaps Not 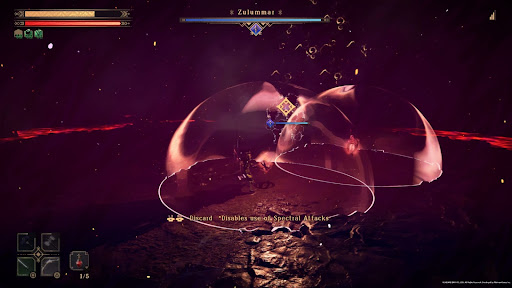 The game can be played solo, but with it being a live service game, it’s mainly designed for online play. So far, it can be quite tough to find people online to play with.

When I interviewed Platinum Games I asked about cross-region play, but they remain that the game is cross-region locked meaning folk from NA and EU can’t play with each other.

Having been given a NA code while living in the UK, there has been a little bit of lag playing online but nothing that really affects my experience.

For all the bad however in Babylon’s Fall, the good can be found, thankfully, in the core gameplay. It has taken the good parts of Nier, and added a fun online twist with friends. 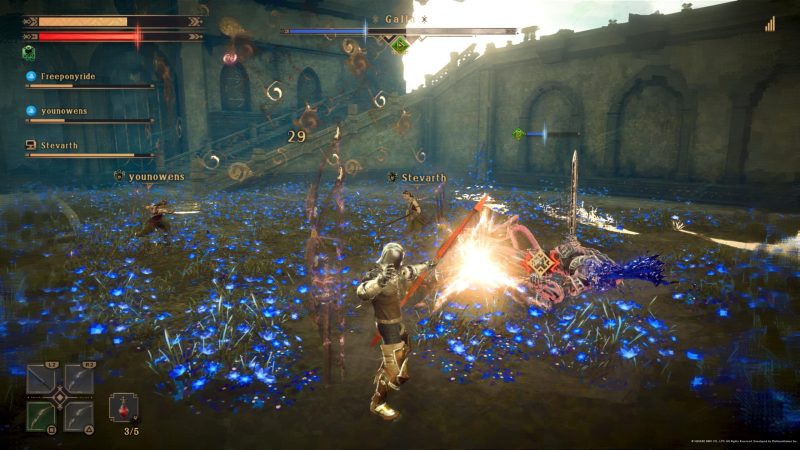 The 4 different weapons you can equip at the same time also helps with making the combat fun and interesting to create different builds, that suit your playstyle. Between heavy, ranged, and close range weapons.

I will say do not buy the starter gear in the shop, this actually scales up with you as you level up.

Waiting until around 40-50 as it is uncommon gear could help you push up a level or two if need be.

The combat starts off very simple, but as you continue to play you unlock new features, such as your Gideon coffin powers – this is based on the kind of character you created.

Though even later on, you can change which power you have equipped. They’re fun, but to get this ability you need to put in at least 10-12 hours I would say before you even get to use what is supposed to be a main feature.

In this way, it’s definitely a grind. 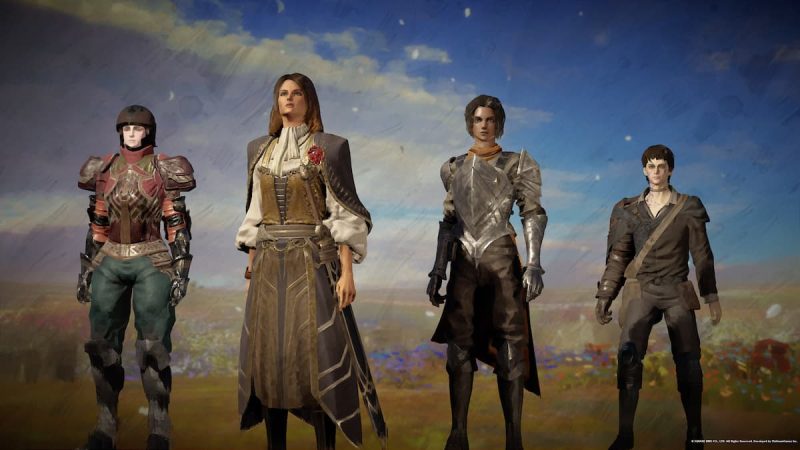 My coffin was the ability to soul vault to enemies, and I felt like this didn’t work all the time and you had to be really precise, just to be able to target the enemy. After beating the main story, you then get access to modes.

My big problem is, this feels like something, you should get near the start of the game and not something you get at the end of it.

You will also unlock crafting and other things as you continue with the story. Crafting can be a lot of fun as you look at the slots you are lacking and are able to craft to get them up so the next time you run the level, you will have a higher chance of getting slightly higher gear.

You can also purchase boosters with in game credits that will increase your drop rate for items, currency and exp.

Later on this was expanded with some other boosters. You can only have one booster on at a time, and they last 1 hour. Thankfully, the booster will pause if you go offline, so you don’t have to worry about them when logging off.

Friends? Get A Room 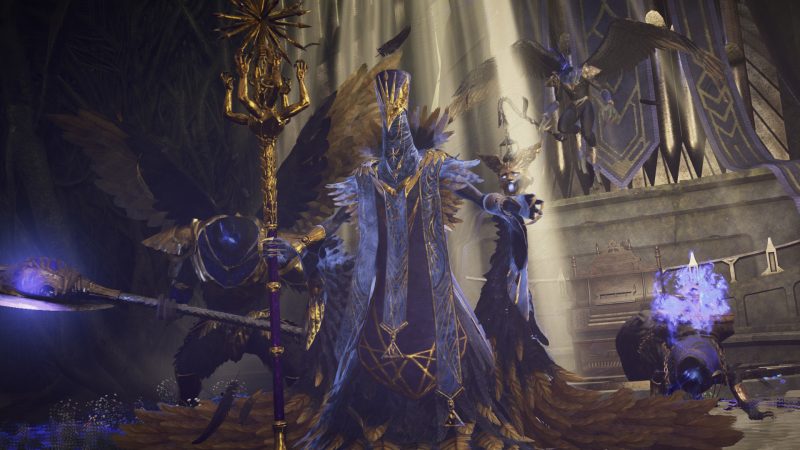 The game can be a lot of fun with friends though, I was able to play with my friend but it was very confusing to set up the match. We saw there was a party menu on the quest board so we were looking everywhere for an invite to party option.

You have to create a private HQ, then give your friend the code to get into the room. When in the room, the players can then pick a quest and it will appear in the party quest option. This took us a little bit of time to understand.

It has the traditional live service real life purchases, with a real money store that currently only allows purchase of cosmetic skins, emotes, and other vanity items.

I am normally not against this too much but the game seems to really lack vanity items to unlock in game and until later on.

You will be constantly changing equipment so if you like to have a set outfit, really there is only one unless you got digital deluxe. So everyone pretty much looks the same for a very long time. 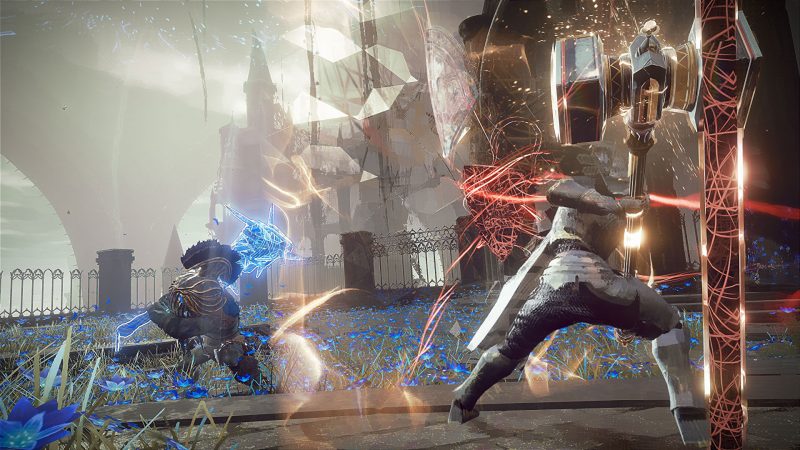 Purchasing other items though with real money, is always an option.

This outfit though is from the battle pass, which for the first season everyone gets the premium battle pass for free with the purchase of the game.

Which I think to be a good practice, as a way of giving back to those players who are jumping into a new live service game, and allowing everyone a chance to get the whole battle pass.

It is pretty easy to level up as you get points from doing orders, missions and even repeating levels will give you a small amount of battle pass points each time.


One thing about this game I really enjoyed, the music is incredibly well done, and is probably one of its best aspects.

It starts off calm most of the time, and ramps up perfectly with the combat as you fight bosses or go into battle with tons of enemies.

Overall, the product feels like it needed a little bit longer in production, if to change some of the textures. With some nice quality of life improvements and constant support I feel there could be a decent game here, but right now it has too many flaws.

Despite the grind, I do find myself enjoying the combat though, so that’s something.

Babylon's Fall flat out needed more time. The graphics make the experience just horrible at times, with the filter even giving me headaches. The combat can be enjoyable, though there is a grind to it, it's something I still enjoy along with the music. Beyond that however, there are still just too many aspects of this game that can make your time with it headache-inducing more often than not.