Did you know that Bruce Wayne’s parents were murdered? Did you know that this tortured/motivated poor Bruce into becoming a symbol of justice (and guano)? Telltale’s first episode in this Batman series isn’t sure you did, so it reminds you quite consistently that hey, Batman’s parents are dead and he’s not best pleased about it. Might even be a bit upset about it if I’m honest.

I don’t think there’s a person alive who would be interested in this game that would need to be beaten over the head with the notion that Bruce Wayne, a.k.a. The Dark Knight, lost his parents to crime, and he’s really pretty miffed by that. In the last decade or so, Gotham showed us the death of the Waynes, Christopher Nolan’s Batman Begins showed it to us, Rocksteady’s Arkham series showed it, and as recently as this year, Zack Snyder made sure we saw Martha and Thomas Wayne get perforated by the bullets of a common criminal and leave Bruce Wayne an orphan. The point I’m getting at is, it may be really important to the genesis of Batman, but you really don’t have to shoehorn the death of Bruce Wayne’s parents into every single bloody Batman story outside of the comics, much less use it as a crutch for character development. A warning to you Insomniac—if you should think about making Uncle Ben’s death a part of your Spider-Man game.

On that note, I’m pleased to say that despite the shocking reminders that the only living Wayne is little orphan Brucie because a bad man made shooty on his parental unit, Telltale take some bold strides away from the established Batman stories while retaining many of the key players in fresh, new ways. Is it a good Batman game though? Well, yeah, sort of, but it’s more about Bruce Wayne, and that’s as fascinating as it is disappointing.

This first episode sees us join a Batman still early in his vigilante gumshoe career, still fighting the mob rather than super criminals, though he soon encounters one iconic villain in the newly-arrived Catwoman. He’s not quite the solid oak of reason, wits and deliberation he will become; rather, what we have here is a cockier, more reckless Batman, still partly-influenced by the swaggering Bruce Wayne side of his persona. He makes mistakes, but he’s still competent enough to tackle a room of goons and solve most detective-based problems. He’s the perfect version of Batman/Bruce to use in a Telltale game because he’s not quite sorted out his moral code or business sense yet and that leaves some room for how you shape his future as both man and myth. The opening scene revels in giving you the Batman experience, and delivers it pretty well. 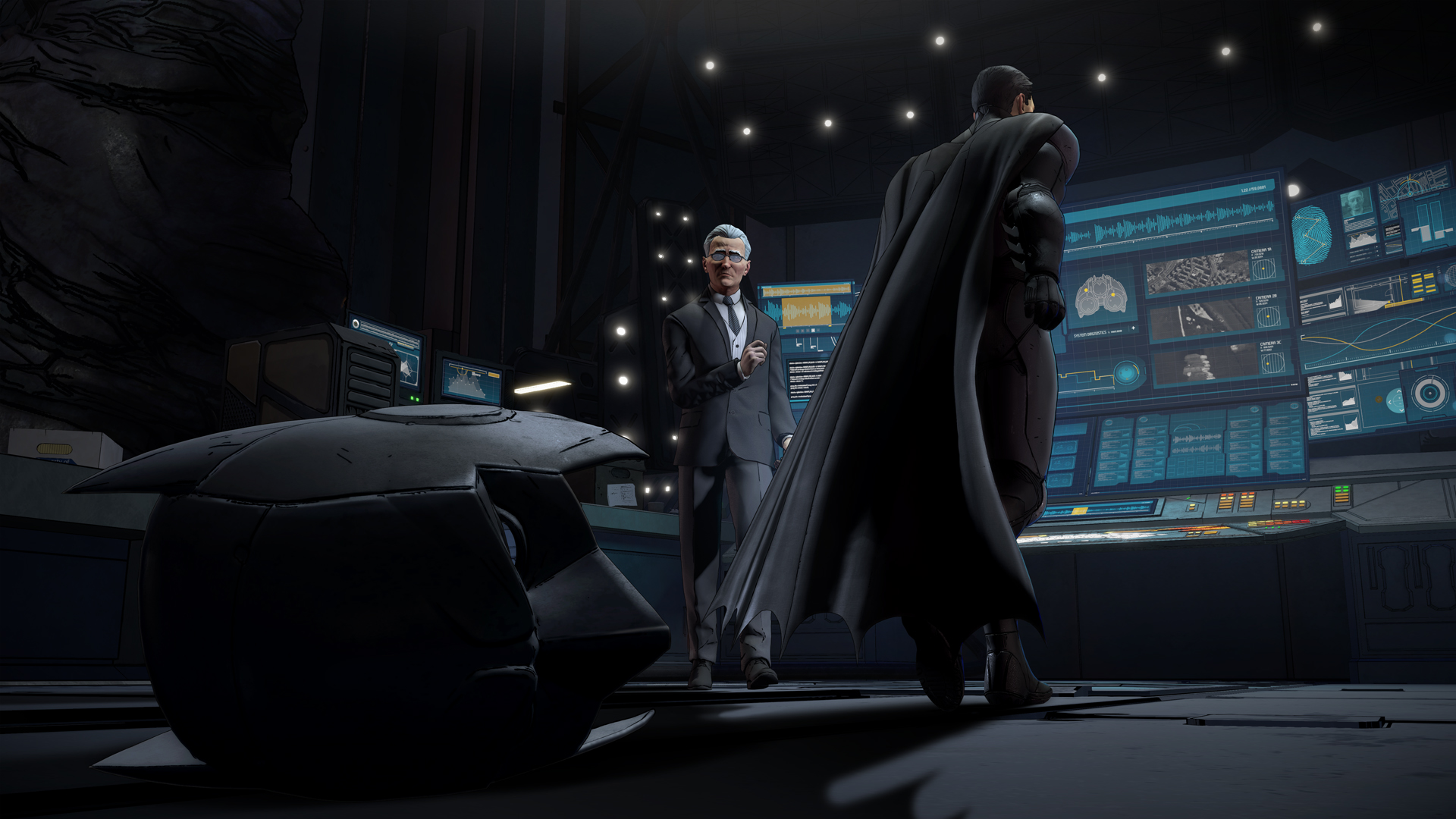 This is Batman and Bruce at the jumping off point, the point of no return if you will. Established canon in Batman’s universe dictates things will only get more insane, more violent and more absurd after the events of this game series, so what kind of man will Bruce be when that time comes? Well, that is of course up to you, in a sense. You’re not going to make Batman into The Punisher or quit the cowl and take up marathon binge-drinking on expensive yachts or anything; rather, you’ll dictate the aggression, the severity of the physical punishment Batman will administer to thugs, and how well Bruce Wayne can cope in the cutthroat world of business.

It’s far trickier to make an interesting game about Bruce Wayne than it is to make one about Batman, but credit to Telltale’s writer, they’ve had a pretty good go at balancing out the man, the detective, and the vigilante. Wayne’s scenes deal strictly in the politics and potentially corruptive influences found in his attempt to back Harvey Dent’s run for Mayorship of Gotham. It’s where this side of the character gets the best scenes. A tense encounter with a mob boss and some awkward questions at a press conference are standout moments, capturing the best of what Telltale’s conversation options can do. It’s moments like these that are reminiscent of the better parts of Telltale’s Game of Thrones political machinations, making a judgement call on how to handle people in a manner that’s subtle when compared to the more dramatic decisions of The Walking Dead. Your words and actions in these encounters can potentially sully Bruce’s reputation and standing, and it bleeds out into the overarching plot, running deep into the fibers of the episode’s ending and likely well beyond it. The Bruce Wayne story is made better when coupled with the now reimagined (and vastly redesigned) Oswald Cobblepot now serving as a mirror of what Bruce could have become if he’d lack a moral core. Their time together in this episode is brief, but it is made quite clear that the soon-to-be Penguin’s role in this series is only going to grow.

That brings us to Bruce’s/Batman’s less politically-driven conversations. The aforementioned Cobblepot scene is limited, but does appear to be merely a taster for what is to come, a conversations with Selina Kyle simmer nicely both in and out of costumes, but it falls flat in interactions with Harvey Dent and Bruce’s loyal butler Alfred Pennyworth. Dent is portrayed as wimpish and uninteresting when he should be a much stronger personality, and the voice acting goes a long way to making it happen. Alfred, meanwhile, is one of the poorest portrayals of the character committed to screen. There’s no withering wit to him, instead appearing as more of a overly concerned aunt.

The voice acting is generally good, but the odd flat performance is made to look poorer thanks to some incredibly clunky writing. One scene that follows a significant decision by Batman on how to handle a criminal interrogation just assumes you picked brutality in the previous scene and Alfred has a go at you for it, which seems way over the top if you chose not to be that violent, let alone accounting for how badly the admonishment is written and delivered to begin with. You also get some terribly trite and cheesy comic book hero dialogue that is almost wince-inducing with its bluntness. It’s a shame because there’s some genuinely great bits of writing hidden among the lazier stuff.

Troy Baker is front and center for this series as Bruce/Batman, and while his Bruce Wayne is pretty good with all the cocksure swagger and reserved cool, his Batman is tad more erratic. Sometimes he pulls off a passable Kevin Conroy impression, but when he doesn’t, his performance comes off a little too calm and gruff—like he’s a bit tired and wants to finish this episode so he can go to sleep. Perhaps it’ll improve though, as Baker is usually a solid and dependable voice actor, so chalk this up as a slightly bad day at the office for now.

How does being Batman handle though I hear you ask? Well, not too bad for a Telltale game. It’s the usual array of stick swipes and button taps, but in one late scene you get to piece together a plan of attack before entering a fight. This is one of the closest representations of Batman’s strategic mind I’ve seen in games outside the Arkham series’ detective sections. It’s bare bones strategy at heart, but still satisfying to see it come together after the planning. There’s also a detective scene that employs similar mechanics, but it feels far more limited than the sort we’ve seen elsewhere. It fits the mould it’s been poured into, but a little disappointing nonetheless. Realm of Shadows is a satisfactory set up episode for the Batman series. Bar a couple of standout moments, there’s not much exciting going on, only the promise of better being on the horizon. There’s some writing and acting issues that need addressing before the next episode drops, but the whiff of Telltale’s engine is getting harder and harder to ignore. It’s been spruced up somewhat, but the clunky walking animations are laughable now and the slowdown, while mild, is still noticeable enough to detract from the experience. Telltale need an overhaul to this engine, and not a cosmetic one.

A steadfastly solid start to Batman’s Telltale series, but Bruce Wayne isn’t the only one with demons to overcome. Some poor writing and acting, plus the usual slowdown and engine troubles means that this isn’t a peak performance for the developer or the character, even if it does set up the rest of the series nicely.