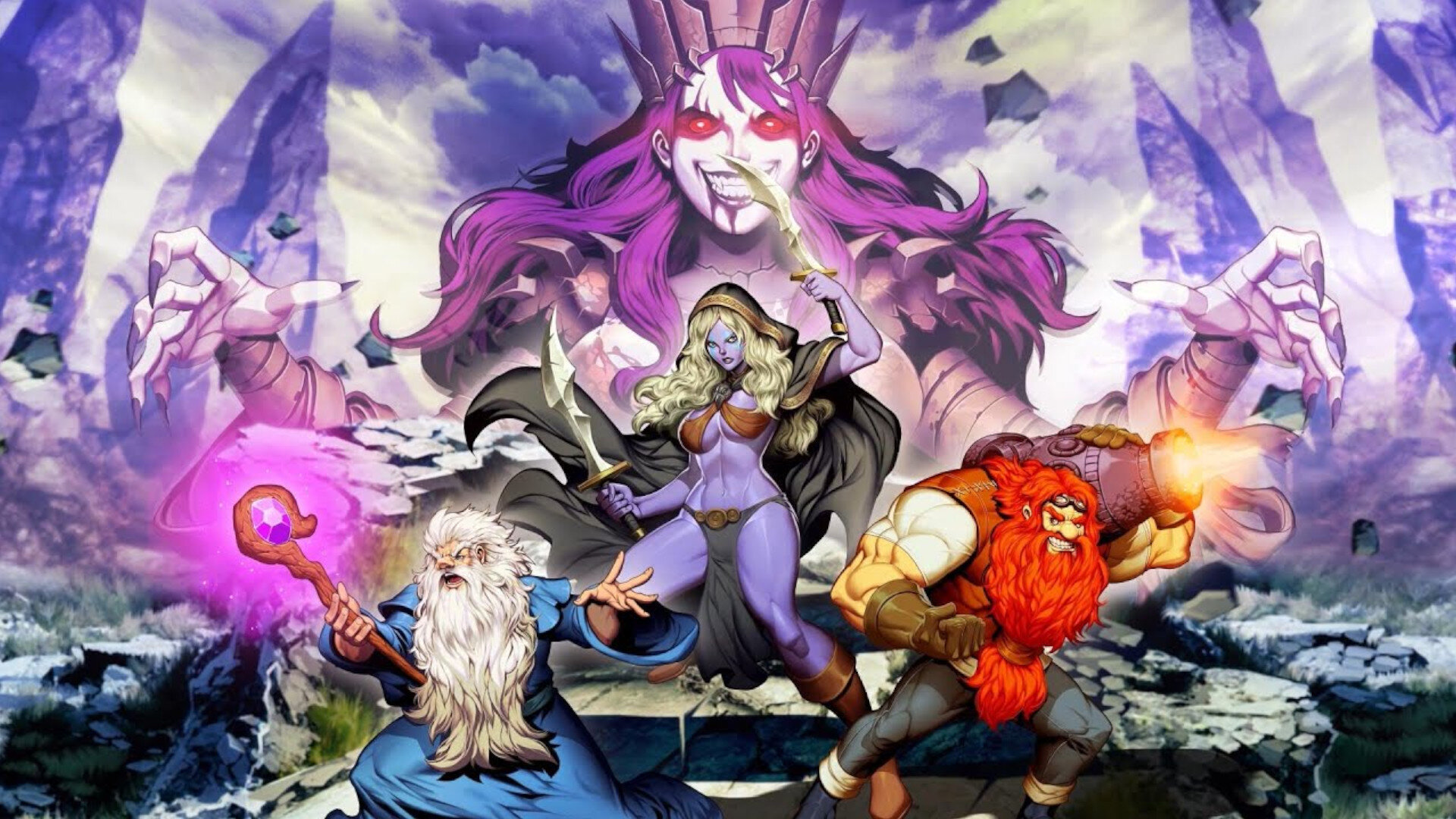 And, whilst Battle Axe is nothing exceptional given its pedigree, there are some strong points that help it shine.

One of the standout things about Battle Axe is the pixel art. Nieborg’s character sprites are colorful and beautifully animated. In addition, each of the four levels in Battle Axe are unique, ranging from vibrant woodlands and dark caverns to medieval castles. The music and audio in the game carries a lot of arcade-like flair, with a booming attitude and campy humor.

In addition, enemy types change from level to level, requiring combo attacks and quick reaction speed to defeat. I found the moving underground tentacles and charging shield knights to be some of the more annoying foes encountered. Elsewhere, obstacles like the flame-throwing statues often proved troublesome. 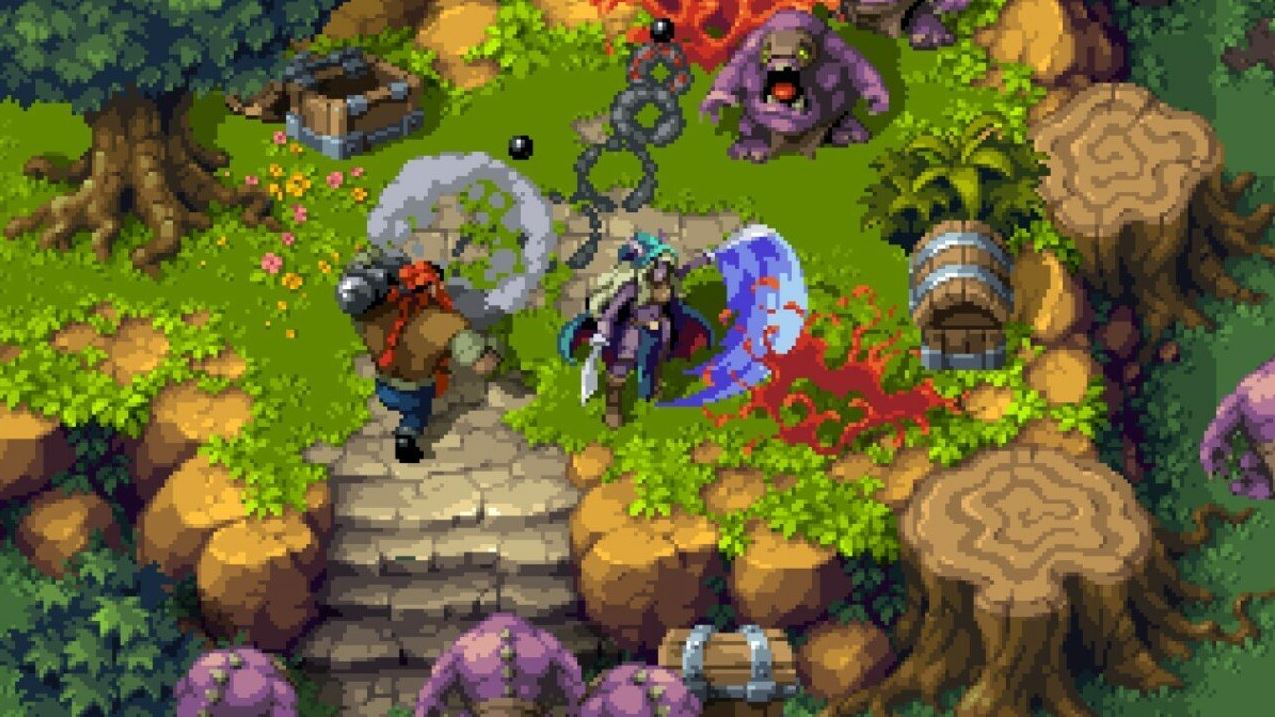 At the end of each level, you encounter a boss fight. Hopefully, by this point, you’ve saved up as much health as possible as you’re pretty limited on lives in the game. Also, you’ll want to save up any bombs or scrolls you pick up along your way, as these will help tremendously when fighting the boss. Upon several playthroughs, you’ll learn its attacks and movement patterns and they shouldn’t put up too much of a fight. These segments often rely on patience and quick reaction speed.

Overall, each level offers enough variety in design, enemy types, obstacles and bosses to keep things interesting. I just wish there were more than four. Also, the levels are pretty linear and don’t offer much exploration or side paths to take. You will die a lot in your first several playthroughs learning the game mechanics, so playing through the first couple levels over and over will get repetitive.

Before starting your journey, you will select from three different characters. The first hero is Rooney The Marauder, followed by Lolo The Druid and Fae The Dark Elf. Each of the characters is unique in their play style and how you control them.

For example, Rooney is your middle of the pack hero, with a decent melee and ranged attack stamina. Also, he acts more like the tank, starting with one additional health point compared to the other two characters. Lolo The Druid is your ranged mage, with speedy distanced attacks and Fae The Dark Elf is your fast melee assassin.

I found myself playing through the game mostly with Rooney, as that extra health point comes in handy. I also enjoyed playing Fae, as she can quickly get away from enemies when groups of them spawn around you.

Perhaps this is part and parcel of the 80’s/90’s arcade-style, but I found the controls to be somewhat frustrating in Battle Axe. While performing attacks is responsive, you can only attack in eight directions (left, right, up, down, and diagonally). I frequently found myself losing health points off of cheap hits from enemies because my attacks didn’t perfectly align with the direction they were attacking from.

Furthermore, the camera doesn’t help, lending to the game’s overall difficulty. I wish it was zoomed out a bit more so I can see upcoming obstacles like the aforementioned flame throwers. The limited field of view feels restrictive in multiplayer as well. Sometimes I would get stuck near the edge of the camera and unexpectedly take an incoming hit from an unseen enemy.

As far as boss fights, only the second level boss fight seemed affected by the limited camera view. It often felt as though half the fight occurred offscreen as the monstrous creature leapt back and forth across the map.

Overall, it’s an incredibly difficult game. It took me dozens of tries to even reach the final level. Also, it doesn’t help that the in-between level merchant, Ælfwyn, doesn’t have any kind of tool-tip or descriptions paired with the purchasable items. Other than the obvious turkey for health points, potion for health regeneration, and scroll for magic abilities, I had no idea what the other power-ups did; I had to look them up online to find out.

Battle Axe includes a couple of difficulty settings, with me choosing to switch between Hard and Easy, although I didn’t find much of a difference between these settings other than bosses having additional attacks included in their arsenal.

Outside of the traditional arcade mode, Battle Axe includes a New Game+ mode as well as an Infinity Mode. Infinity Mode takes you across 50+ maps where you scour the map in search of villagers to rescue. Once you’ve located and freed all the villagers, a portal will open up, taking you to the next map.

If you’re looking for a couch co-op game to play with your friends, Battle Axe offers an entertaining experience. Multiplayer is somewhat competitive though, as you don’t share items, gold or scores. Also, as previously mentioned, the restricted camera can make it somewhat difficult to move around the map and avoid enemies. Unfortunately, there is no online multiplayer, which is a disappointment.

Solid But Not Spectacular

When all is said and done, Battle Axe provides a nostalgic arcade romp that you can play with your friends in local multiplayer. Since the main story mode only includes four levels, it’s meant for quick play sessions.

However, the difficulty will hold you back from just breezing through it during every playthrough. The pixel art and music are fitting for this top-down hack & slash adventure and I foresee myself grinding through it to obtain all the Trophies. It’s solid, but just nothing that will blow your socks off.

Battle Axe is available now on PS4 and is playable on PS5 via backwards compatibility.

Battle Axe offers a nostalgic arcade hack & slash experience with it's beautifully created sprites, levels, and bosses. Beating your high scores in Battle Axe's arcade mode and infinite mode will keep you busy for hours. The levels offer a diverse variety in enemy types and obstacles, but the game can get somewhat repetitive after a few playthroughs. Where the game ultimately falls short is in the controls and camera, which further adds to the game's challenging difficulty. Also, the absence of online multiplayer is a shame.