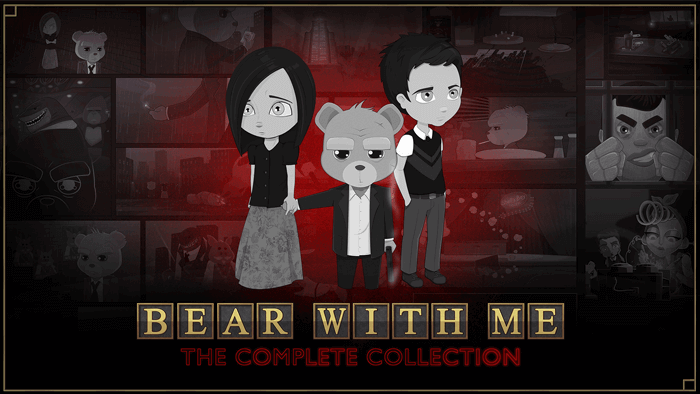 The point-and-click adventure genre is one of the oldest in the industry. Focusing on puzzle-solving and storytelling, the genre has seen some greats, such as the Monkey Island titles and the Siberia games. Bear With Me: The Complete Collection continues the tradition of the great point-and-click adventure with a great noir story featuring some unlikely characters, mixing a dark story with childish characters.

The story follows Amber and best friend, Bear, a teddy bear that lives in her closet who also moonlights as a private detective. Amber’s brother has disappeared, and an evil man is after Amber. Now, Bear has to find out who he is and why he’s after Amber.

Bear With Me Has Some Solid Writing And Storytelling

The writing is top-notch. While some people may find a lot of the puns cringe-worthy, it makes sense as the story unfolds. Bear himself goes though plenty of monologues and sometimes you don’t truly understand what he’s talking about, but it’s all in good fun. The writers don’t have any problem making fun of themselves throughout the game. One scene, in particular, sees Bear providing one of his monologues, only to have Amber interrupt him and ask him why he’s in a sound studio.

The story itself is good with a lot of moving parts. The characters are a shining bright spot in this adventure, ranging from a mob boss portrayed as a Shark, a bartender who’s a squid, and K-9s as the police force. I loved interacting with each character and hearing their stories.

The world itself is a character which fits in a noir style of storytelling. Paper City is a living, breathing world that I wish was fully explorable but alas only specific locations can be visited at specific times in the game. Each location is full of easter eggs that players will find from other games and even TV shows.

Bear With Me is an episodic game, spanning three episodes along with a fourth prequel episode that tells a stand-alone story. The three episodes are fairly short in length, and the entire game can be beaten in about four or five hours. Now the second and third episodes have a lot of strong moments, but the first episode feels more like a demo and doesn’t really add a lot to the overall experience.

As with any point-and-click adventure, puzzles are a big component in the game. This is yet another area that I wish Bear With Me would have tried a little harder. Outside of a few puzzles, most of them are fairly easy to figure out, and mostly they just involve common sense to solve, combining the right items together to achieve your goal.

Bear With Me: The Complete Collection is a great adventure that tells an emotional story by combining great writing, characters, and some fun though easily solved puzzles. Bear With Me is a great example of why the genre is still strong so many years later.

Bear With Me: The Complete Collection is now available on the PS4

Review code provided by the publisher

A sold entry to the point and click adventure genre. Bear With Me: The Complete Collection tells a great story in a Noir style. Filled with great character and writing it hits most of the marks, it's just a shame that it's short-lived and fairly easy to get through.

Bear With Me: The Complete Collection