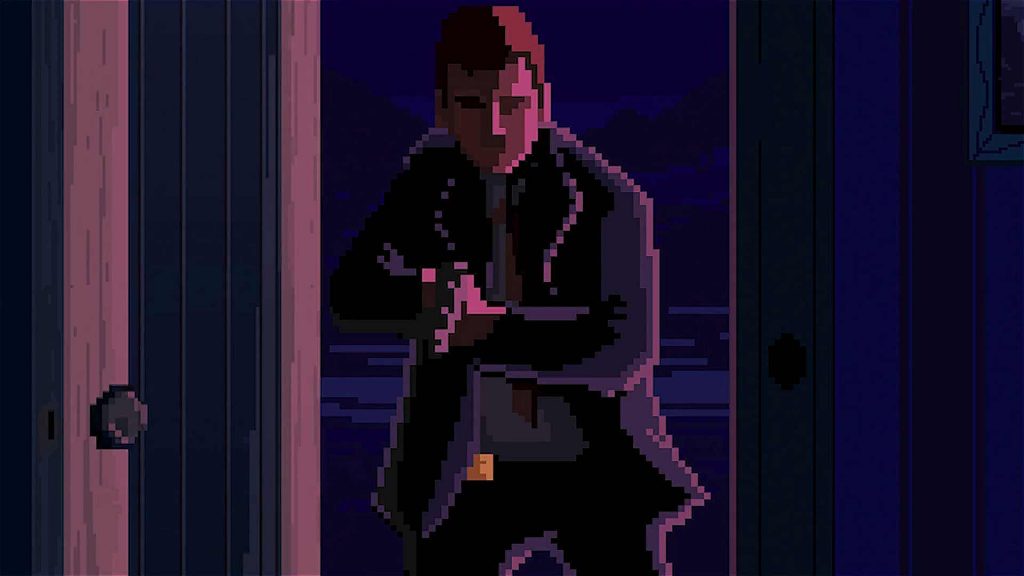 A retro, pixel-art homage to the 80’s cop shows of old, Beat Cop is all about munching donuts, cuffing criminals, dealing with corruption and walking the beat of a police officer in 1980s Brooklyn. It’s an interesting setting certainly, but where Beat Cop really surprises is in how in deftly balances the romanticism of 80s cop shows with the grim pragmatism and seedy underbelly which lay beneath.

Beat Cop is not a game for everybody – but then again, it never tries to be.

A long strip of brownstone structures greets you as Beat Cop kicks into view – the picture completed by the assortment of fast food carts, culturally variable eateries, kids skipping down the road and even glimpses of homeless folk huddling around a burning bin at night-time. Though hardly a romantic depiction of one of the most evocative cities in the world, Beat Cop nonetheless presents its vision unashamedly – warts and all.

Though Beat Cop arguably captures the macho flourishes of 80s cop shows such as Hill Street Blues, at least on the surface, developer Pixel Crow is clearly also working on another level here too. Beat Cop is just as much about the constant, daily grind of police work, the attitudes towards your daily life as a police officer – both from your colleagues and from the folks on the street, and the struggles of maintaining a robust moral compass in the face of temptation. Simply put, there are no shortage of gangs who are willing to pay you a piece of the pie to turn the other eye.

As detective Jack Kelly who is framed for murder and then subsequently busted down to a regular and titular Beat Cop, you are tasked with discovering the culprit behind the frame job. This is in addition to navigating the shark-infested waters of a new police precinct that is hostile to you, dealing with the local gangs that have carved up the streets into territories and, of course, you need to stump up enough cash every three days to satisfy alimony payments to your ex-wife. Fun times!

And that’s sort of the point – Beat Cop is as much about capturing the small-screen heroism of 80s cop shows, as it is all the grime and unsightly stuff which underpins it. As to how this maps across in gameplay terms, Beat Cop is, at its heart, a stress sim where you’re given a very set amount of time to get stuff done, but it is entirely up to you both in what you do and how you do it.

Though each day has you fulfilling a quota of tickets, which if doubled gets you extra pay, you’ll also find yourself presented with no shortage of opportunities to take advantage of. A child might want you to fetch her cat, someone might attempt to bribe a parking ticket away or some Italian ‘gentlemen’ might want to make you an offer you can’t refuse – but regardless of what you do you’re constantly walking a tightrope between your own morals, your standing with the locals and earning enough money to keep yourself afloat.

Beat Cop then is an exercise in pressure cooker stress and prioritisation that manifests itself against the backdrop of rapid-fire moral quandaries. Do you respond to a call about a hostage situation, simply continue with handing out tickets to beat your quota, or, do you accept the call and maybe see about getting a few cheeky tickets in along the way – maybe risking the hostage in the process?

In this sense, Beat Cop can make you feel terrible as you weigh up one set of moral circumstances against the other; the grime and the compromised morality of its setting some how rubbing off and infecting you the more you play. Should you feel like you’ve made an especially bad decision during day of hard policing, or missed out on a lead or completing a particular task, a handy rewind feature allows you to reset your progress for that day and start again.

Of course, it doesn’t help that between the ram-down-your-throat stereotypes and the fact that just about everyone you come across in the game is a complete asshole, that the world of Beat Cop is as oppressively grinding as it is evocative. The police in particular are especially awful for the most part – after one of their own dies in the line of duty, all they can seemingly do is in engage in a bunch of office banter about the sex they had the night before and what to do with the money that they owed the deceased party.

Beat Cop is grim, crass and takes a while to get going but once it does it compels with surprising strength

Upon booting the game, one of the things the splash screen tells you before you get into the game proper is that you shouldn’t take any of it too seriously and that you should just have fun. This is completely fine in theory – it’s just that there is a lot of hefty and racially charged language used in it, which is done so to reflect the time period and the cultural zeitgeist at the time, but will nonetheless will grate if not outright anger some folks as a result. This is very much a case of your mileage may vary.

Likewise, the actual main plot strands of Beat Cop do take a while to get going, so those looking for something with bit of a punchy pace will find that Beat Cop’s relatively sluggish journey from narrative start to finish somewhat of a bitter pill to swallow. The other side of this coin, is that Beat Cop boasts multiple endings depending on your choices and which groups you align yourselves with, so the scope for replayability is both substantial and compelling.

Then there are the mundane tasks and the sheer level of stress that Beat Cop can inflict upon the player who is looking to do everything, and I get it – I do; I understand why some folks can find Beat Cop oppressive and chore-like to the point of pad-breaking frustration. However, in that vein it succeeds in capturing both sides of the equation; balancing the macho romantics of 80s cop culture with the seedy pragmatism that lay beneath and wrapping it all up in a delicious retro aesthetic that just pops off the screen.

Like the larger-than-life characters in the small screen shows that serve as its inspiration, Beat Cop is a compelling enigma; it’s crass, fiendish, deceptively deep and doesn’t give a hoot what you think of it – and I’m pretty sure I’d not have it any other way.

Published by 11-Bit Studios and developed by Pixel Crow, Beat Cop: Console Edition is out now on PS4, Xbox One and Nintendo Switch.

Much like the setting that inspires it, Beat Cop is crass, dirty and morally reprehensible at times. Though it certainly isn't for everybody, there is a certain attraction that Beat Cop exudes which has you coming back, time and again, to its grimly framed world of corrupt cops, jobsworth toil and pressure-based strategy.