Developed by Good Catch, Black and White Bushido takes the form of a stealth-flavored arena brawler for up to four players. The game kicks things off with an interesting cutscene showing off the playable characters you can find in the game, while the loading screens offer a quick catch up on the control settings. One of the first things I would say to do before loading up either online or offline is to check the settings; there is an adjust colour contrast option, which you’ll find is pretty crucial.


The biggest factor of Black and White Bushido is the balance of light and shadow in the arena. You can opt to play as either Light or Shadow, and the screen changes contrast as you play; as you might have guessed, the Light team can blend in with the Light background and Shadow does the opposite. You can use this to sneak up on your opponent to get an easy kill, or just to hide in the shadows waiting at a flag during capture the flag mode. This is a really cool idea, but sometimes it can be a pain just keeping an eye on your own character when it has blended in, so this is where the contrast is good. In some ways it feels like cheating, but if you are having trouble tracking your own character then it is something that has to be done.


Black and White Bushido has several different modes, ranging from Deathmatch, Flag Capture, and Challenge. Deathmatch and Flag Capture are your bog standard affair, but Challenge mode feels slightly unique and gives you different objectives to do while trying to capture the flags from an increasing amount of bots. Said challenges can range from killing a certain amount of enemies with techniques or simply using the hide ability to sneak away from the enemy for a certain amount of time. The game also features seven different maps, with one of them locked off; a personal favorite has to be the field, which boasts plenty of different spots and can have you pull off some really awesome kills. One conspicuous feature (and i’m unclear if it’s actually a bug or not) is that the AI is always on the opposite team, even if you select three AI bots, which can be frustrating at times. As such, it would have been nice to have someone on your team now and then. 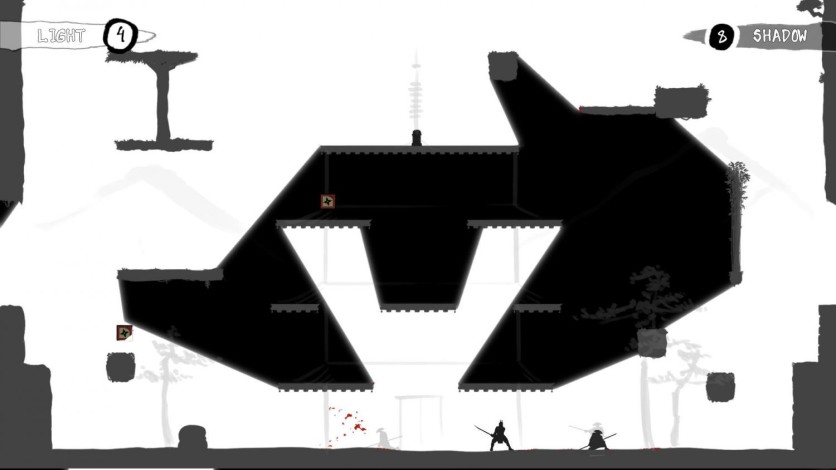 The game features four different characters, each one with slightly varying playstyles. I mainly selected the default Samurai as his design is fantastic, though I have enjoyed playing with the guy who uses the Pike (mainly because I like his fancy hat). The game also spawns random items on the map this includes Shurikens, Caltrops, and a Teleport item, which you then have to use to your advantage. For example, Shuriken will one shot players when you hit them, and you can throw them at any angle you want. Black and White Bushido also boasts some pretty solid sound effects, with the items having a unique feel to them and the menus coated in a silky eastern feel.


Overall, Black and White Bushido is a lot of fun, with support of up to four players local or online, this is certainly a game to bring out at parties or when friends come over for some fun. The inclusion of online play also means it’s a pretty fun time sink when playing alone, though bots can get a bit repetitive after a while if you’re playing solo offline. The online is limited to the Deathmatch or Capture the Flag modes, but at the time of writing I was unable to test these modes due to nobody being online as the game had yet to see a general release. One positive about the online I was able to test out, was the fact it has searchable lobbies, so you can join your friends game easily, though a quick match feature would of been nice to include also. The game also has incredibly easy Trophies up for grabs, so if you’re a completionist then there’s plenty to tuck into here.

Overall, Black and White Bushido is a lot of fun, with support of up to four players local or online, this is certainly a game to bring out at parties or when friends come over for some fun.