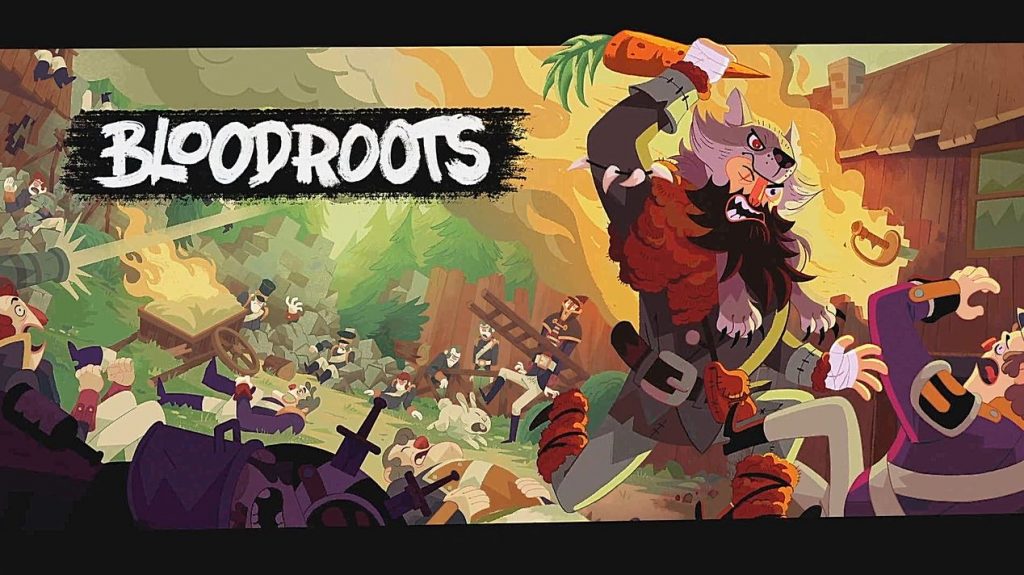 Have you ever wanted to kill someone with a carrot? A ladder? Maybe even, a chunk of wood? Well, Bloodroots lets you do all of that with its bloody, intense, and fast-paced combat that leads to an addicting and replayable experience as you chase high scores and attempt to kill everyone in new and unique ways.

Paper Cult Games have crafted their own satisfying take on the Hotline Miami style of gameplay and coated it with a layer of top-notch presentation.

After being left for dead by a gang of rogues, you, as Mr Wolf, go on a murderous rampage against those that attempted to end your life and anyone that stands in your way. Across its three acts, Bloodroots gives you countless tools to aid you in your killing: an axe, the aforementioned carrot, a laser, a barrel, a gun, a fence post, a ladder, arrows, a frying pan, even a ball on a chain that will grasp at your enemies heads and rip it from their bodies.

All of these items can be quickly grabbed and swapped between (using just two buttons) as you come across them in one of the game’s lengthy and complex levels. The speed at being able to swap between these items, attack, and pick up a new one from the ground, gives Bloodroots a sense of flow and speed that games like Hotline Miami and The Hong Kong Massacre didn’t have.

Those games were about carefully entering each room and being prepared for what was in there. However, Bloodroots is about moving from enemy to enemy, picking up whatever you can find around you on the way, never stopping and flowing from one foe to the other kinetically.

That sense of speed and never-ending adrenaline is what helps Bloodroots stand out from other games in the genre. Playing bloodroots feels like you are on a rollercoaster consistently, only gaining a brief ten seconds of calm in-between rooms filled with soldiers, rogues and outlaws who are your punching bags.

Hand to hand weapons aren’t the only tools at your disposal, with large sweeping attacks coming from spears and ladders, while barrels allow you to trample over enemies as you ride them across spikes and hazards. Whilst, large cannons can be used to jump to elevated heights and crash down with a satisfying smash, turning everyone in the surrounding area into pools of blood and bones. Each room is capped off by a satisfying killcam that will show the final enemy getting pulverised by the weapon you killed him with.

Streaks and Scores Allow For A Whole Lot of Gore

Encouraging you to keep up the pace and not stop is a satisfying multiplier streak that consistently fills if you kill enemies in quick succession. This meter in the top right shows you how long you have left and adds to the urgency to move onto the next enemy and keep traversing through the level. Even if you fail to keep it, you can rebuild it as soon as you kill the next enemy. It is certainly nothing revolutionary, but its presence goes a long way to making Bloodroots’ unrelenting action and sense of speed engaging and exciting.

That multiplier you build up contributes towards an overall score rewarded at the end of each level, which is made up of the combo you achieved in your multiplier, the variety of weapons you used, your mobility, and the speed at which you were able to kill everyone and reach the end. The score at the end and worldwide leaderboards allow for a lot of replayability to chase better scores and compete against your friends if that is what you are looking for.

Replayability is bolstered by the number of options on offer in a level. In order to clear a room, you can take the desired path that Paper Cult has crafted into the environment, or you can find you own way around, jumping on top of roofs, making use of different tools in the environment, and cutting out long stretches of land by using weapons, such as a sword which lunges you forward.

These options are never mandatory, but I found a lot of enjoyment in taking my own path and discovering new ways to slice through my enemies. These new paths can even lead to unique weapons not seen in most levels until later in the game.

On top of that, achieving a certain score will unlock a hat, which can be equipped in previous levels to grant extra bonuses, such as the ability to jump twice.

A Technical Struggle at Times

Unfortunately, I ran into some problematic frame rate drops in Bloodroots during moments with a lot of enemies on screen, which exacerbated when those enemies were attacking. Even with a day one patch that addressed some of the more egregious examples, the game still stalled and froze at times, which led to some deaths.

Other than those issues, Bloodroots is a gorgeous game to look at and its cartoony art style is a joy to look at, especially during the killcams, where an axe will crush an enemy, sending out a squirt of blood onto the floor.

Bloodroots is all about is gory, frantic, and fast-paced combat which excels and is on par with the best in its genre. The sense of speed and the adrenaline you feel as you spring from enemy to enemy, pulverising them as you go gives Bloodroots is own unique twist.

With a good amount of replayability and great presentation, any fan of indie games or titles of a similar genre would be silly to not pick up Bloodroots and play through its three-act campaign.

Bloodroots is available now on PS4.

Bloodroots combat is fast and frenetic that is on par with games like Hotline Miami and The Hong Kong Massacre. With great presentation and a good amount of replayability, Bloodroots is a wildly bloody and thoroughly satisfying time.