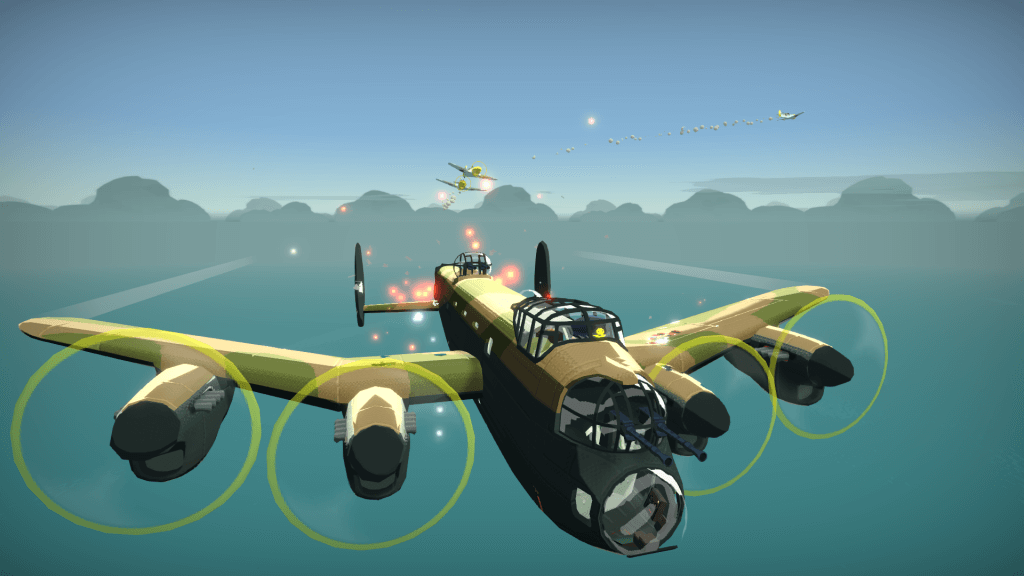 The year is 1942. At RAF Woodbridge, Wing Commander Biggins is assembling a team of enthusiastic recruits to operate a state-of-the-art Lancaster Bomber and complete a series of dangerous missions deep behind enemy lines; all in an effort to hinder the Axis war machine.

Oh, and did I mention these recruits are complete amateurs who were driving taxi’s and sweeping roads just last week? Or that the Lancaster Bomber in question is painted Jack-O-Lantern Orange with the words “Tally Ho!” emblazoned on the fuselage in livid yellow paint?

This is Bomber Crew: an utterly charming air combat sim that’s been doing the rounds on Steam for a few months now and, rather excitingly, has just landed on PS4.

Bomber Crew is split in two halves: the main campaign, where you’ll be spending the majority of your time, and Challenge mode.

The campaign begins by asking you (on Wing Commander Biggins’ orders, of course) to gather together a crew of seven amateur aviators from a small roster of eager recruits: two gunners, an engineer, a navigator, a radio operative, a bomber, and, most importantly, a pilot. Everything you need to turn the tide of war in the Allies’ favour.

With your squad assembled, your next task is to customise your rag-tag squad of airmen and women; an enjoyable process, but one that will force you to spend an inordinate amount of time agonising over the minutest of decisions. What type of headgear your engineer should wear, for instance, or the style of shoe favoured by your rear gunner as you contemplate ignoring the safety and mobility of your crew entirely in order to increase their chances of survival should you have to ditch your aircraft in hostile waters mid-mission.

Customisation – particularly finding a balance between weight, defence, and equipment load – is even more important when it comes to kitting out your bomber, as you fine-tune everything from the engines and turrets, to the on-board systems (hydraulics, electrics, etc.) and the ratio of first-aid kits to parachutes and fire extinguishers. Before making the most important choice of all: should your aerial fortress sport a homogenous navy blue decal or a slightly more festive, wrapping paper motif?

Once crucial decisions such as these have been made, you’re ready to take to the skies, completing a range of critical (story) missions and side-operations across Europe: destroying ammunition stores, V2 rocket sites, a fleet of enemy U-boats, and various other ground-based threats; all whilst fending off the unwanted advances of a cavalcade of German fighters. As this brief description might suggest, the vast majority of missions essentially boil down to ‘blow up X and, if you have the time/aren’t in danger of ditching in the Atlantic Ocean anytime soon, take a photo of Y’, which can become slightly repetitive after a while. However, despite the general lack of mission variety, the simple fact that you can choose to delay your escape to bring down any remaining fighters or snap a few additional reconnaissance photos in order to earn some extra money/intel, increases the tension – and consequently the enjoyment – of completing even the most outwardly straightforward operation. As does the impressive depth of the game’s mechanics and systems which, during these raids, asks you to juggle ad hoc repairs with bombing runs, dogfights, and triaging wounded crew members; whilst frantically cycling through the special abilities of each character hoping to find something that’ll give you some breathing room. All, I hasten to add, in real time.

When you combine the intricacy of these systems and that element of high risk/high reward with the abundance of customisation options touched on above, the steadily increasing difficulty, the occasional appearance of a formidable Ace Pilot, and the ever-present spectre of catastrophic failure, moments of true monotony are relatively few and far between.

Challenge mode, meanwhile, offers an enjoyable alternative to the main campaign. Functioning as a traditional wave mode, the primary goal is simple: survive for as long as possible whilst completing the on-screen objectives as and when they appear. A range of power ups appear every now and again that allow you to quite literally repair and refuel the aircraft on the fly (as well as heal any wounded crew members) before the next group of enemy fighters or land-based hazards come into view, although you’ll still need the same hectic plate-spinning skills mentioned above if you’re to have any chance of surviving longer than five minutes.

The reward for a good performance is, as you’d expect, a higher score. Yet this basic exploitation of our desire to see ever bigger numbers and the sense of satisfaction that provides, alongside Bomber Crew’s impressively deep mechanics, is more than capable of consuming an entire afternoon if you’re not careful. The biggest issue with Bomber Crew on PS4 are the controls – at least, initially.

Switching between crew members, moving them about the craft, and utilising the targeting system can all be slightly fiddly compared with the precision of a mouse and keyboard. During the first few hours of my time with the game, for example, I found myself struggling to tag enemy aircraft unless I picked them up on the radar screen immediately, while I’ve accidentally deselected crew members on multiple occasions when trying to issue simple orders.

Similarly, with the bomber’s interior so cramped for space and the camera slightly less accommodating than it could be, it’s not always easy to reposition an individual character, leading to some mildly frustrating if comical moments in which, instead of sending a wounded gunner to the medical bay, I’ve asked him to lie on the portside wing. I know they say you should fight fire with fire, but I’m not actually sure bullets can heal gunshot wounds.

That being said, it does get moderately easier to navigate the controls and thus keep the plane/crew in good working order once you’ve got a few missions under your belt. However, it never feels quite as streamlined as other games that have made the jump from PC to PS4: Invisible, Inc. or XCOM 2, to name but two.

If the controls can be moderately problematic on occasion, there’re no such issues with the presentation.

Bomber Crew’s low-fi visual style suits it down to the ground, even if it somewhat belies the game’s enviable levels of depth. Not just because it’s an indie game and that’s kind of what we expect – stylised rather than gritty, photorealistic graphics – but because it matches Bomber Crew’s subtle, tongue-in-cheek humor; the authentic-sounding fake English place names, the professions of your crew members, the comic banter of the Ace pilots. Little, light-hearted touches that increase the game’s charm without detracting from its inherent challenge and prodigious entertainment value.

Minor gripes aside, the best way to describe Bomber Crew is (if you’ll forgive the attempt at period-accurate officer-class patois) bally good fun! There’s a pleasing amount of depth to the game’s equally impressive array of systems and mechanics, hidden behind a charming, low-res visual style and sense of humour. While the sheer range of customisation options gives players everything they need to put their own, unique stamp on each save file. Hectic, tense, and ineffably satisfying, Bomber Crew is certainly one of the more original and entertaining indie games currently available on PS4.