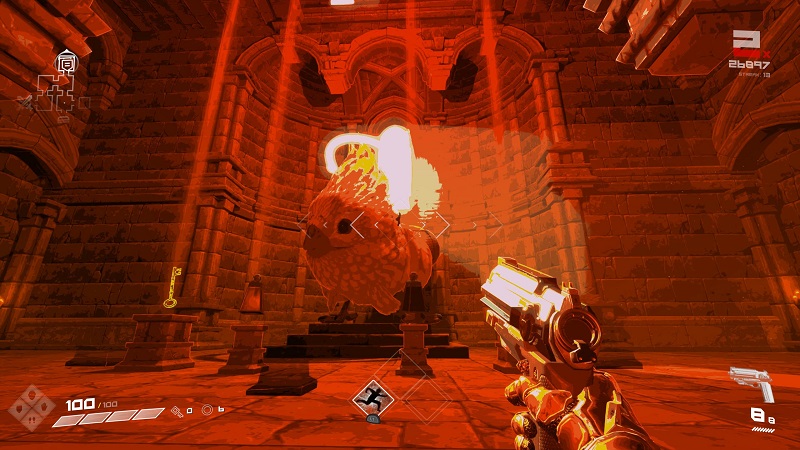 BPM: Bullets Per Minute Review (PS5) – Part of what I personally love in rhythm games is that they are either very literal in their definition of being a rhythm game, or something channels that experience, albeit in a very subtle way.

For example Sekiro: Shadows Die Twice is a rhythm game if you think about it, proven by the fact someone beat it using DK Bongo Drums – BPM: Bullets Per Minute is the former of the two, and it’s literal approach is part of what makes it so special, and so incredibly fun.

With a heavy metal soundtrack that pulsates and pushes you forward constantly through each death towards another run, this simple and challenging arena shooter is a must own for any rock music loving first person shooter fan.

BPM: Bullets Per Minute Review (PS5) – Whatever You Do, Don’t Lose The Beat 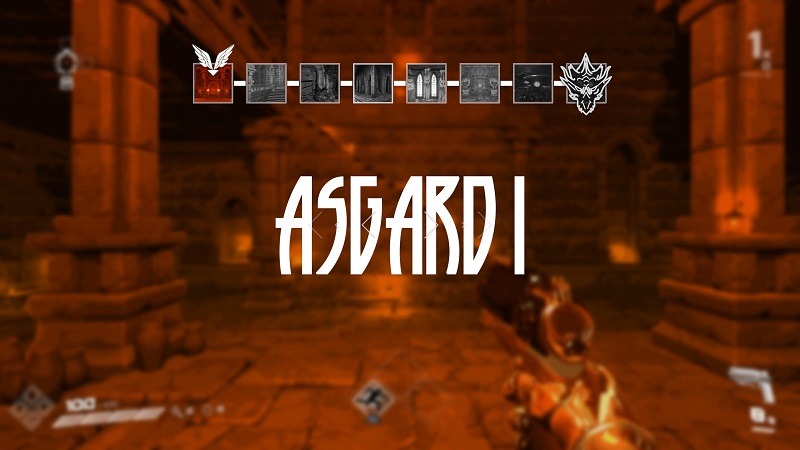 BPM: Bullets Per Minute works for a few reasons, and only part of that is the core concept of having all of your actions be timed with the beat of the music. Everything is built around that, but the layers are what really make the mechanic work as well as it does. For example, it’s not a very complex shooter in terms of the actual shooting.

You get one weapon at a time, which is decided on by your starting character, your ammo is unlimited but there’s no special ammo, and you don’t have a melee button, though some abilities provide a similar service to your loadout.

It’s all done so that you can focus in on staying on the beat, and keeping on time as you shoot, reload, dash, and do pretty much everything but move on the beat. So, each room looking relatively similar and having such a limited arsenal in terms of what you can carry may be a bit oversimplified, but it works because it makes the core mechanic of staying in time with the music a lot easier to handle.

It also remains to be different enough each run, since BPM is a procedurally generated rougelike, so each run will look entirely different in regards to the path you take and the kinds of rooms you come across, and you also have to beat the game in a single playthrough. Thankfully, you can pause your run and come back to it, if need be.

One of the more clever layers that BPM includes is added changes to each new run. For example, jumping into the first level, it will instead read “Dark Asgard” or “Frozen Asgard” instead of “Asgard,” or my personal favourite, “Space Asgard.” Whenever this happens, the environment has been altered slightly or in some cases dramatically to change the gameplay in an effective way.

Dark Asgard turns out the lights and gives you only a flashlight to be able to see what is in front of you, Frozen Asgard encases the ground in ice so you slip and slide around, and Space Asgard unfortunately does not take you to space, but it does reduce the gravity so you can jump incredibly high.

Those are just three examples, and there are more to be found, but it shows how BPM is able to get away with a simple approach to the gunplay in what feels very similar to a DOOM-styled arena shooter. On top of that, you can give your stats small boosts by offering a coin to various idols, giving you speed boosts, damage boosts, luck boosts, ability boosts, range boosts or precision boost.

Don’t Get Thrown Off Your Groove 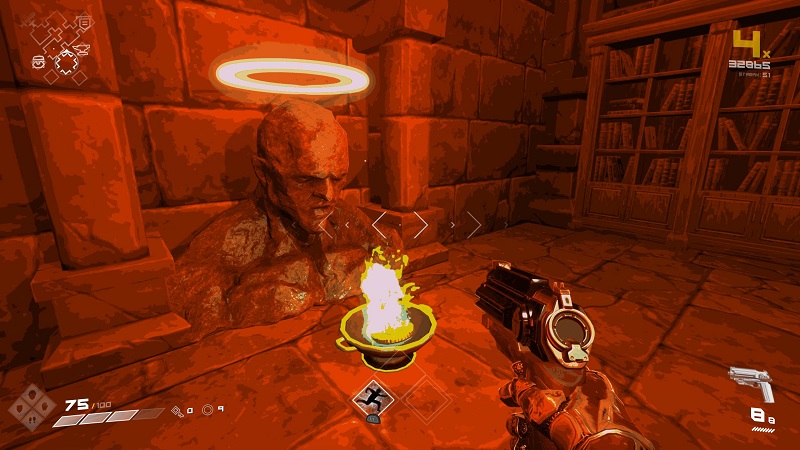 Players should be warned however, BPM is in no way an easy game. Getting better at your timing can of course help, but there are a lot of factors that go into prevailing against the hordes of bugs, spiders, demons and all sorts of creatures who want nothing more than to tear you to bits.

In addition, you can only take four hits at the start, and while you can increase your health, you won’t have that option every run.

So not only do the gods of RNG need to be on your side more than ever, you don’t have practically any room for error and must adhere to the strict rules of shooting and reloading on the beat. Not to mention of course you don’t know what kind of curveballs you’ll be thrown when you walk into a new room.

Even in early stages you can find yourself stuck in a corner. BPM’s developer Awe Interactive ramp up the difficulty in subtle ways not just through tougher enemies who hit harder and are more difficult to take down, but with different kinds of challenges based on enemy type when you enter a room.

For example, instead of facing a few tough enemies like an Ice Witch and Guardian in the same room late in the game, you might be bombarded with flies, all firing at you, all moving very quickly, all very difficult to shoot.

It’s again another layer where you see the game design around you work to add complexity where everything else stays very simplified. It’s clever, but decidedly more difficult than being able to predict the kinds of foes you would face across the four sections more accurately. Even when you think you’ve got it, changing difficulty levels brings whole new challenges forward at different points.

Inject It Into My Veins 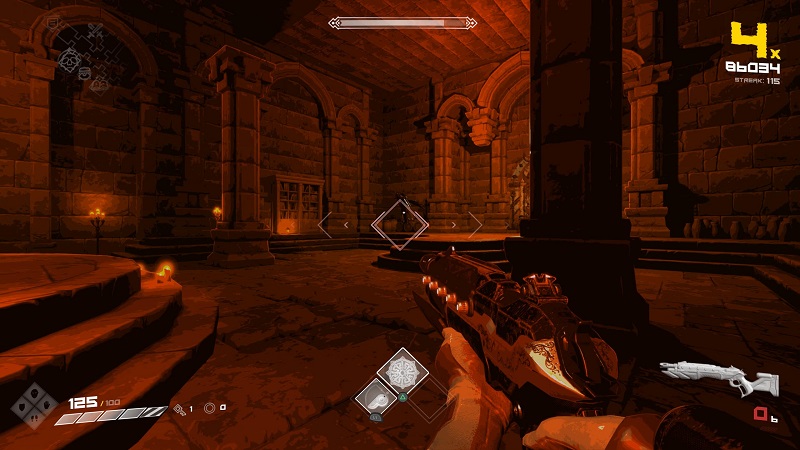 There are some video game soundtracks that will forever stay with me because of how incredibly the music was able to convey the emotion of the scene while also fuelling me as a player. Celeste comes to mind, and in a totally other vein soundtracks like Scott Pilgrim’s are just so insanely addicting it makes me hit repeat on what I just heard rather than move to the next song.

With that said, BPM’s soundtrack is the first one that I can confidently say I want injected into my veins.

The score mixes perfectly with the gameplay, keeping you in every moment of every action, the drums keeping you in time as you dash around rooms, and it just has a quality to it that allows it to get under your skin and stay with you for days.

It sounds like the energy I want to keep while I’m doing pretty much anything that requires me to be active, or when I’m working, or even just playing a game, but in that case, I just play BPM.

Each level changes the music slightly, while each section entirely changes the tone, though each of the realms all have an intense and pulsating track to go with them. I should also mention that I say this as someone pre-determined to like this kind of music, because it’s already in my wheelhouse. Even if the music isn’t your favourite, it still works cohesively enough with the gameplay that you can get into it from that angle.

A rhythm game like BPM though generally needs to pick a tone and stick with it, so their music of choice was never going to be for everybody, much as they might try. I guess you could put the game on mute and play your own music, while trying to pay attention to the metronome that is your reticle but that just sounds like a more confusing and less fun way to experience the game. 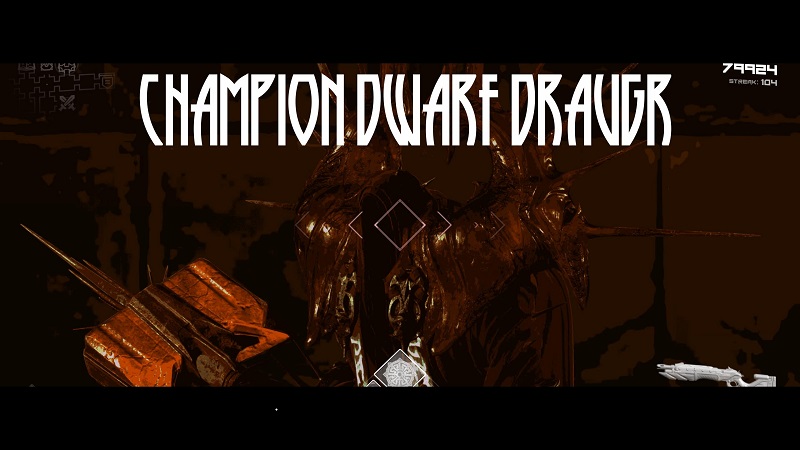 It’s easy for me to recommend BPM: Bullets Per Minute because it’s my kind of game. It’s got a killer soundtrack and addicting gameplay loop all wrapped up in a nice challenging bow for me to bang my head against the wall at until it breaks or I finish a run.

If the gameplay wasn’t as strong as it is though, the same-y looking rooms, while only being able to carry one weapon at a time, and praying to the RNG gods that I’m able to pick up strong abilities and boost my damage output combined would have caused for far more frustration.

That’s thankfully not the case, and because the gameplay is so good it makes me not care about those flaws. The simplicity of it also means I can just pop it on if I only have about 15 minutes or so to spare, not concerned that I can’t start to play anything because it would otherwise take at least 15 minutes to get going.

Awe Interactive was able to create a shooter with a DOOM-style dance to it, stripped down and focused in more on the music and a core mechanic that is not only fun to play for a few minutes but for a few hours, walking the tightrope of being a seemingly small, simple game with massive potential for players to just get lost in.

BPM: Bullets Per Minute is available on PS4 and PS5.

BPM: Bullets Per Minute is a fast-paced and intense shooter stripped down to only the very basics, all of which is meant to focus you in on the core mechanic of staying on beat. Fortunately, it works beautifully well and creates a fun and addicting gameplay experience that stands above some minor flaws.