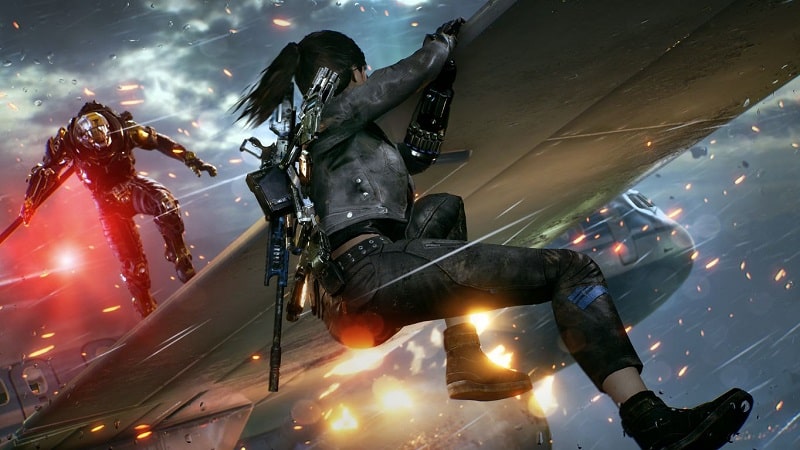 Bright Memory: Infinite PS5 review. One look at any of the expertly edited trailers for Bright Memory: Infinite reveals a startling truth – this is a game that seemingly combines everything that you’ve ever loved about first person shooters and third-person action games over the last decade into one improbably high-octane package. Like most things in life, if that sounds too good to be true that’s because it actually is, but it’s not because you can’t do all of the awesome things that you see in the trailer for Bright Memory: Infinite – you can – it’s just that the game is much, much too short. Like, two hours short – but every second is worth playing all the same.

Though Bright Memory: Infinite has a ramshackle plot of sorts pertaining to the merging of realms and a range of supernatural beasties influenced by Chinese mythology being brought into the world courtesy of a shadowy corporation, it’s really in the blisteringly fast first-person shooter action that the game stands out and sets a foundation for what will hopefully be a fully realised sequel in the future. 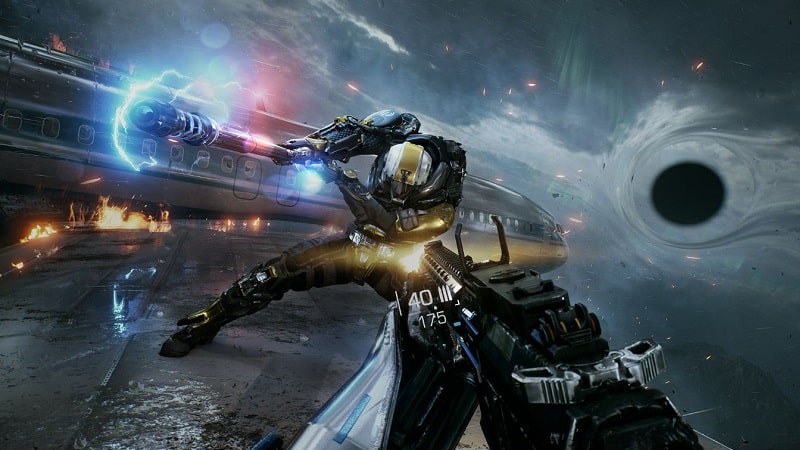 A single-player only first-person shooter, Bright Memory: Infinite feels like a super satisfying marriage of Titanfall 2’s lightning fast gunplay, Ghostrunner’s acrobatic movement and Devil May Cry’s combo system – it is, in effect, a chimera of a game that everybody should experience from start to finish at least once.

Combat in Bright Memory: Infinite is blissfully multi-faceted to say the least. You have three different firearms at your disposal – a pistol, rapid-fire assault rifle, sniper rifle and automatic shotgun that each have their own alternative fire modes which dish out devastating attacks when supplied with their own ammo supply to do so. Happily, I can report that the gunplay in Bright Memory: Infinite feels wonderfully responsive and snappy in the same vein as the Call of Duty games, with switching between hip-fire and scoped-fire essentially being satisfyingly instantaneous.

As you may have already guessed however, despite being wholly satisfying, the gunplay in Bright Memory: Infinite finds itself constrained somewhat by the quartet of firearms on offer. In truth this overly reductive selection of firearms serves to highlight a broader flaw with Bright Memory: Infinite which is that the whole affair feels much more like a teaser sized morsel of something greater, rather than a substantial genre offering that can ably stand on its own two feet alongside its peers. 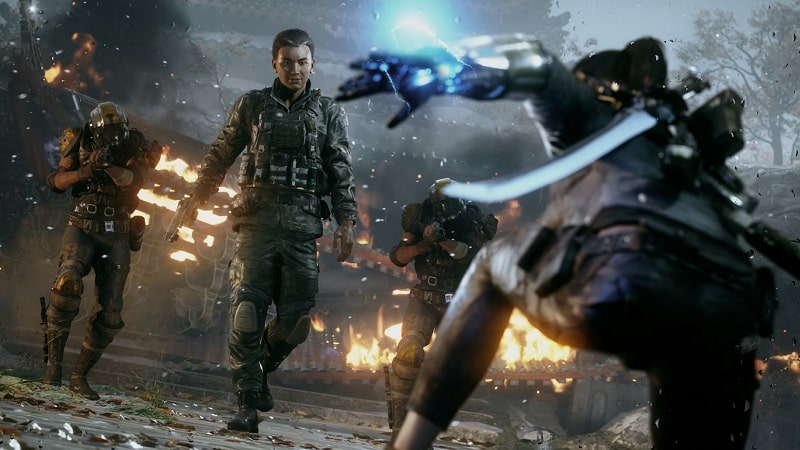 When you’re not blasting enemy soldiers to bits, you’ll be slicing and dicing them with your trusty sword. Leagues above the usual melee options that you normally get in traditional shooter titles, the sword in Bright Memory: Infinite can be used to deflect bullets back at enemies, carve them up, or launch them up in the air for some Devil May Cry style juggling with your sword, guns and other powers (more on that in a bit).

Another supremely satisfying element of Bright Memory: Infinite’s design is how player movement is handled and more pointedly, how developer FYOD Studio makes you feel like you can do just about anything. Thanks to a superbly responsive movement system that lets you side-step and slide along the ground at extreme speed, combat and traversal in Bright Memory: Infinite never feels anything less than utterly breathtaking and empowering.

Augmenting its already impressive combat offering further, Bright Memory: Infinite also allows players to unleash a series of psychokinetic attacks on the enemy hordes, generously exploding their bodies and splattering their bodily matter all of the scenery in the process. 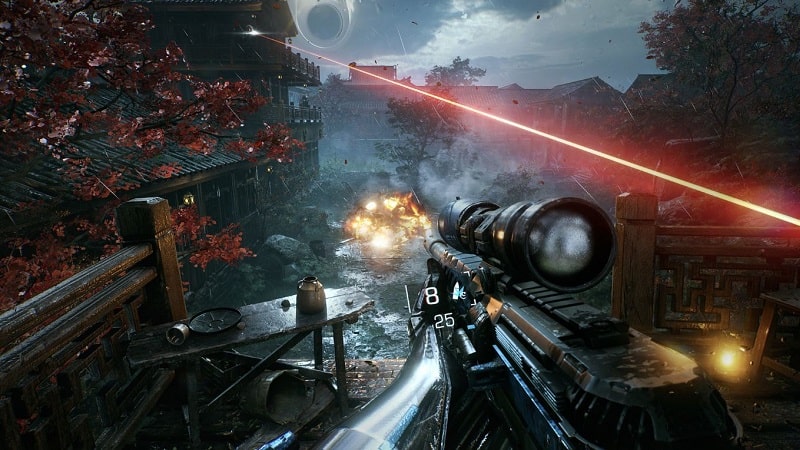 By permitting players to effortlessly combine the gunplay, swordplay, psychic attacks and fantastic traversal facets, you feel tremendously capable and powerful in Bright Memory: Infinite, which arguably is how you should feel when playing any first-person shooter that’s worth its salt; a fact that is farther underscored by largely excellent boss fights against a variety of towering baddies from the depths of Chinese mythology. I just wish that there was more ‘game’ here to really the make the most out of it.

Running at 60 frames per second with ray-tracing, or 120 frames per second without for those of you lucky enough to have a compliant display, Bright Memory: Infinite is certainly something of a visual treat. Beyond its technical merits, Bright Memory: Infinite also manages to duly impress with its art style, evoking a rain-flecked vision of rural China, mythological foes and high-tech enemies in a way that remains fresh and undeniably attractive.

Outside of Bright Memory: Infinite’s all too brief duration, one of its other sizable flaws is that it spends a chunk of its meagre available time getting the player to do stuff which is nowhere near as good as the hyperkinetic first-person violence that arguably serves as the bedrock of its appeal. Stealth sections where you have to creep through a bunch of conveniently designed gardens, sneak-killing guards and avoiding spotlights feels like it has been ripped right out of 2007, while a largely on-rails driving section, though visually impressive, feels like every other ‘driving’ section I’ve played in a Call of Duty and Battlefield game for the last decade. 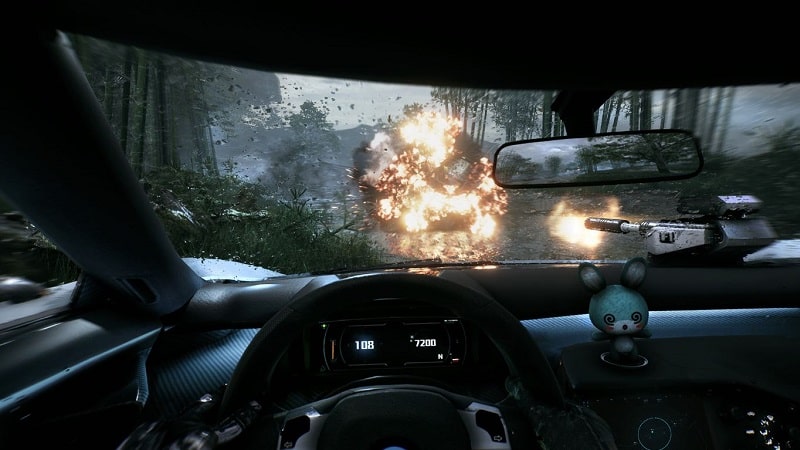 Though you could certainly perhaps accuse Bright Memory: Infinite of being a veritable pick and mix of (somewhat old) ideas at best, or simply being on-the-nose derivative at worst, the fact remains that while it lasts Bright Memory: Infinite is a blast, albeit one that essentially repackages the essence of other genre affairs in a delectable aesthetic.

Unfortunately, without any additional modes and outside of replaying the game on a higher difficulty level, chasing trophies and tracking down a number of alternative thirsty looking costumes for the main character, Bright Memory: Infinite provides very little reason for returning after you’ve completed your first playthrough.

Bright Memory: Infinite is out now on PS4 and PS5.