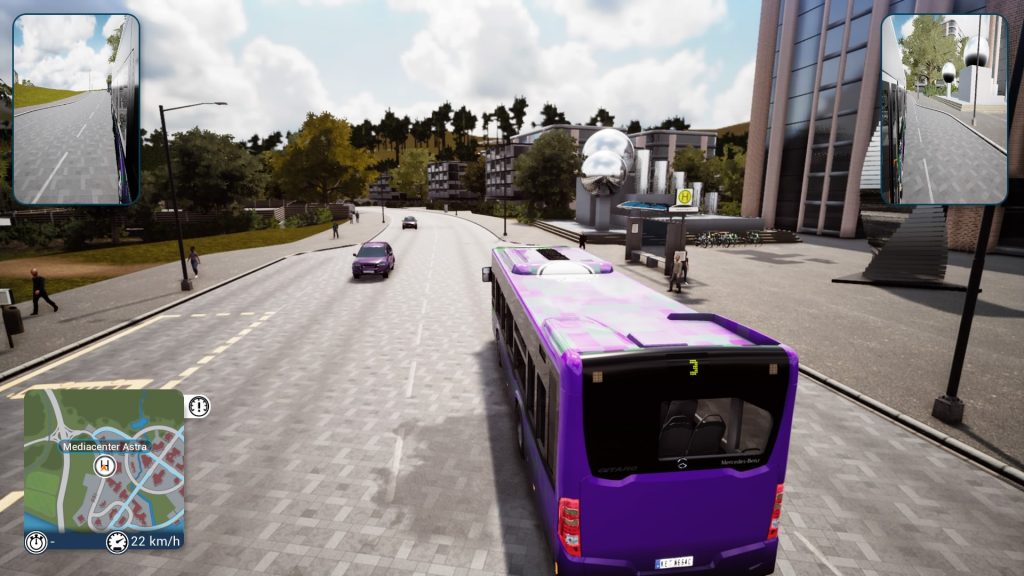 Modern consoles now have the ability to train you up for a new career – after playing Airport Simulator, I worked part-time as an air traffic controller during the summer holidays. Last Easter, I worked as a moderately successful male gigolo after playing Brothel Simulator for half an hour. And now you can realise your dream of being a cantankerous, rotund bus driver with Astragon‘s Bus Simulator

“If you want reality take the bus.”

After a spell on PC, the developers deemed the PS4 fit for a journey around the suburbs, and aside from the curious drop in graphical fidelity, the gameplay has arrived intact.

You are thrown headlong into the career mode by a nice lady who talks you through the scenario of the town which was bereft of a public transport system, for which you have been chosen to pioneer a new bus service. Driving the first simple route on a small section of the area map teaches you the basics – indicating before pulling over or away, stopping gently at the bus stop in the right position, selling tickets to the customers (or not if you switch it off on the menu) and driving cleanly around the route without “curbing”, “potholing” or mowing down a line of commuters.

After you pass your initiation test, you can then create your own route based on the pre-existing bus stops and start making money for your new bus company. Money then brings the opportunity for purchasing one of the seven other bus models, employing new drivers to assign to your bus routes and the ability to pimp your buses with new decals and designs. Of course, you’ll also need money to pay for the numerous fines you’ll receive for errors whilst you’re out on your rounds.

“Sometimes it’s good to miss a bus. It might be the wrong bus.”

The actual driving is fairly satisfying, with the buses feeling ungainly and weighty enough to represent how a real bus feels on the road, although they don’t quite nail the satisfying inertia present in the buses in Grand Theft Auto or Wreckfest. You can switch between first person and third person, with the latter only really helpful for negotiating roundabouts and traffic, otherwise it feels a bit too detached and removes the feeling of simulation.

The first person view also enables you to see the dashboard with numerous buttons which must be pressed at some point during your shift – disabled ramp, windscreen wipers, a selection of lights, the ticket machine and of course the ejector seat for firing awkward customers into space. Actually I think I must have imagined the last one.

Pulling over at a bus stop and opening the doors enables the great unwashed to clamber aboard – once you’ve served their tickets and they’re all seated, you can close the doors, indicate (L1 or R1) and pull away. Brownie points are awarded for clean driving which are all totted up at the end of the shift and awards are given in the form of cash. Various events occur whilst you’re out on the route, such as customers listening to loud music who need to be reprimanded, littering, people blocking the doors and rush-hour traffic which will jeopardise your ability to make it to the next stop on time.

Once you’re back at the depot, you receive your awards and eventually level-up, unlocking new sections of the city map, new vehicles and the ability to brand your bus with advertising to bump up your takings.

“A bus ride is like being in another world.”

The objectives are enjoyable to complete, although there is a conspicuous lack of play-testing on occasion when it becomes apparent that the wording in the objectives doesn’t actually match any of the route modifiers. Who in their right-mind would equate a ‘Round Trip’ with the ‘Ping Pong’ option?

Building up your bus company and creating/driving new routes delivers a chilled and relaxing experience which does a good job of simulating the rigmarole of being a bus driver. You can enjoy the tedium inflicted on the bus driver stuck behind a queue of traffic from the comfort of your sofa, rather than having to haul your oversized rear-end into a pair of bus company trousers.

Where the game fails to deliver is in the visuals department. There’s an overriding dullness to the colour scheme, (which is perhaps intentional to reflect how the job affects the mental state of a real bus driver), the NPCs are hilariously wooden and simplistic, and the scenery and vehicles look like the developers accidentally included a graphics filter to simulate cataracts.

The weather effects and day/night cycles are serviceable, with the night time rain successfully making it hard to see where the bus stops are or spotting people crossing the road.

The gameplay would have been greatly enhanced with a vibrant and convincing world in which to drive your bus, rather than the dreary and dated environments on display here. The music and sound effects are great though, with the developer’s wry humour voiced through the customers as they chat while you drive.

If the idea of Bus Simulator floats your bus, you’re sure to enjoy your time with the game, as it delivers a light-hearted and relaxing experience with plenty of depth and scope for improving your public transport business during your career as a driver/manager.

If StillAlive Studios can sort themselves out in the visuals department for Bus Simulator 2020, they’ll probably widen the appeal of the series and make the simulation more convincing for the converted.

Bus Simulator is out now on PS4, PC and Xbox One.

An enjoyably sedate outing around the suburbs, marred by the antiquated and dull visuals, Bus Simulator nonetheless provides a good chunk of all too real simulation of public transport.