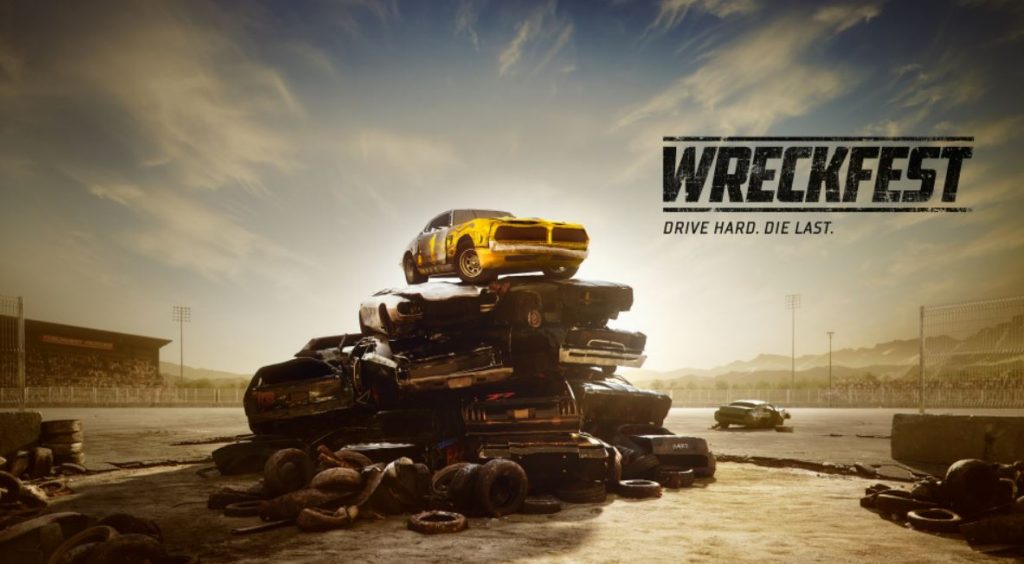 The world is doomed. We are all on an irreversible slide into ecological catastrophe, hastened by the rise of madmen and our unwillingness to change our ways. All we need to do now is wait for the reaper. And while we wait, let’s have some fun smashing things! There’s something deliciously nihilistic about breaking things. And providing no-one has been injured, a car crash is irresistibly compulsive viewing, so a game based around vehicular destruction can’t fail can it? Enter then, Wreckfest from developer Bugbear Entertainment.

It all began back in the mid 1990s when Reflections (now part of Ubisoft) developed Destruction Derby 1 & 2 for the PS1, nailing the car physics and damage modelling to create a highly playable but ultimately crude destructive sandbox. Then in 1999, Driver brilliantly enhanced the feel of the cars and the sheen of destruction to make one of the most smashing games to date.

Fast-forward to 2005 and Finnish developer Bugbear brought their quirky sense of humour to the destructive racing oeuvre when they released Flatout 1 & 2 for the PS2, flinging ragdoll bodies from cars at the drop of a hat in frequently comedic fashion. Now Bugbear have returned in 2019 with the shiniest destructive racer yet, combining the gleefully moronic wrecking pits from Destruction Derby with the fast-paced banger racing of Flatout.

The single player career in Wreckfest plays out as expected, easing you in with a variety of races, wrecking pit battles and increasingly beefy vehicles which unlock as you progress through the five championships.

As well as upgradeable bangers which are loosely based on real world cars, you also get to drive mini-tractors, sofas (!), combine harvesters, school buses, motorhomes and Reliant Robins in a selection of wrecking challenges. As such, the single player career is nicely balanced with enough variety in circuits, events and vehicles to keep you plugging away to see the next crazy event.

Each event has a bonus challenge built in too, such as spin three competitors off the road, or finish 50 metres ahead of the second place drive. The playful invention and anarchic sense of fun built into the game shines through at every level, demonstrating how much fun the developers had making the game as players delve into an insanely destructive sandbox unlike any other seen in this generation.

The races themselves are a chaotic free for all, with 23 other vehicles jostling and ramming each other over three, six or twelve laps depending on the length and complexity of the circuit. Piles of tyres are flung skywards on each corner, with some unfortunate cars launched into the air or head-on into concrete barriers or trees if they don’t make the turn.

Some serious rubber-banding (Not a euphemism but a phrase used to describe an incremental speed advantage given to cars trailing at the back of the pack) ensures there’s always a cluster of cars nearby ready to smash you off the circuit, and it also enables you to catch the front runners if you find yourself at the back. Occasionally this means that you can be pipped at the last turn by another car despite driving a faultless race, but at least you never get complacent.

There is a wealth of single-player career content to get stuck in to, with increasingly long races testing your concentration to the maximum – one mistake on the last lap of a 12 lap race with having already sustained critical damage will mean curtains for your car and another restart…

Where the game will truly come alive will be with online multiplayer, with up to 16 players battling it out on the myriad of events and circuits. The servers were empty during the review period, but you can guarantee they’ll be bustling after August 27th.

Aside from some occasional extended loading times, it’s difficult to fault Wreckfest. The presentation is glorious throughout, with an astonishing amount going on during each race and no noticeable drops in frame rate at any point. The cars, circuits and track decoration all look suitably shiny and grimy with superb lighting, dust and smoke effects.

The special effects grind and clink effectively over the chunky engine sounds which in turn give the weighty cars even more gravitas. The numerous circuits have been lovingly crafted to cause maximum havoc, with figure 8 and head-on opportunities aplenty and the damage modelling is exemplary.

Each panel, bumper, grill or wheel can be convincingly crushed, torn off or dented during an event, with most events ending with an embarrassment of smoking half-sized bangers limping over the finish line. The achievement of 24 cars on track on any given race means there’s never a dull moment; look back over your ‘shoulder’ during any race and you’ll see a hilarious pile-up playing out amongst the NPCs behind you.

This is an essential purchase for anyone who likes a big dose of chaos on track, crafted by a developer who clearly love what they’re doing. It looks and plays great, and the online multiplayer looks to be the icing on the cake.

Wrecked is out now on PS4.

Turn off your mind, relax and ram someone off the road. A definitive festival of wrecking which nails the damage modelling and weighty feel of the cars perfectly, Wreckfest is a must for anyone with even the smallest fondest for racing and wrecking.