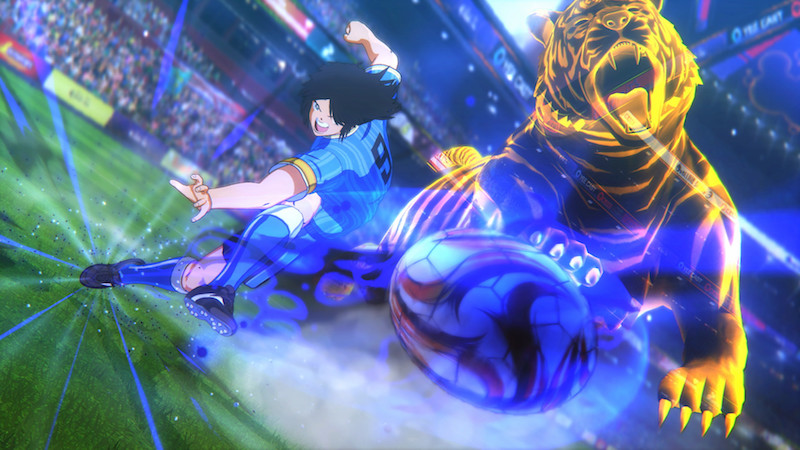 Captain Tsubasa: Rise of New Champions PS4 Review – Bandai Namco delves ever deeper into its bag of anime/manga licenses and brings out something that’s a little different this time. Captain Tsubasa: Rise of New Champions is, on the surface at least, an arcade football/soccer game with highly expressive anime stylings. Yet the footy is not really the key to the approach of the game, and as such, is both a source of great strength and Tsubasa’s biggest weakness.

This game brings the near-40-year-old Captain Tsubasa manga kicking and screaming into the digital age to go along with the most recent anime adaptation.

The original story revolves around 11-year-old Japanese playmaker Tsubasa Oozora and his quest to win the World Cup with his country. In the 80s manga and subsequent anime adaptations, Tsubasa’s journey took him from talented wunderkind to elite level player, and in typical fashion, he develops rivalries, faces obstacles, and eventually wins the day on a regular basis. Here, the story sees Tsubasa in elementary school, on the verge of moving to Brazil to play as a professional, but being the top guy he is, he wants to help his school side Nankatsu win one last tournament first.

This high drama version of football does, on paper at least, seem like a perfect fit for a video game. After all, over the years it’s featured the kind of over-the-top, combative, kinetic play that wouldn’t look out of place in any number of flashy fight-orientated Shonen Jump titles. Gravity-defying jumps, headers that should shatter a player’s skull, and shots that literally summon spirit animals to signify their power are hardly things you’ll see on a Saturday afternoon kick-about, but they’re the essence of Captain Tsubasa’s high-velocity approximation of the game.

While the framework is sport, the underlying systems make Captain Tsubasa feel more like a brawler or fighting game. The basics are familiar to anyone who’s regularly played a FIFA or PES in recent years, with a similar range of passes, shots, and skills to deploy. In actual football terms, the only real difference is that matches are two 30-minute halves rather than the traditional 45, which suits the pace and urgency of the game’s style. Dig that bit deeper, however, and you start to see how it differs from established footy titles even more.

In attack, the objective is to effectively chip away at your opponents health bars (stamina) via jinking runs, fancy passes, and stinging shots on goal, and then wait for an opening to charge up your super move (which is an extra powerful shot) to rip a hole in the opposition’s net. On the defensive side, fouls are basically nonexistent, so every tackle is akin to being bodied by the Terminator, with the victim flopping about like a fish dumped on dry land.

When an attacker comes into close proximity with a defender, a duel takes place where the timing of a push of R1 and the player’s stamina level help decide if the defender leaves the attacker in a heap or the attacker leaves the defender in his dust thanks to a burst of supercharged speed for winning the contest. As with a fighting game, you can get by with doing the simple things, but to play Captain Tsubasa in the style it wants means learning the more intricate aspects of its movesets.

That means learning how to line up the right players in the right spot to unleash signature shots and passes, mastering button combos to help break down stubborn defences with dazzling passages of play. The best place to learn that is in Captain Tsubasa’s two story modes. This unfortunately is also where the game’s flaws are exposed the most.

You are recommended to try Tsubasa’s story first, and this is where you’ll probably first dive into the Captain Tsubasa game as a whole because it teaches the basics as you go. It also gives the worst possible impression of the game due to its scripting.

An ongoing pet-peeve of most FIFA or PES players is the alleged ‘scripting’ of the AI that seemingly controls the flow of the game and sets up dramatic moments. That annoys players because it takes away agency from the player’s ability, but it’s still relatively subtle as problems go. In Captain Tsubasa’s initial story, the scripting is a bit more literal and obvious as it’s tied into the story itself. As a result, the teaching process is rather aggravating and unwelcoming.

More so than anywhere else in the game, teams are tougher to break down in Tsubasa’s story, and thing’s are made tougher still by cutscenes dropping into the middle of matches that influence play. In one match, you automatically concede a goal in a cutscene, and the game still expects you to turn it around or fail the entire match. This would be agreeable if there was a set point it happened, but this can show up at almost anytime in the entire match, and as you’re not yet aware of many of the helpful moves for unlocking a defence or stopping the seemingly unstoppable, the match is an uphill slog.

From a story standpoint, it makes sense. Tsubasa’s whole deal is fighting against the odds and winning the day, but it gets more than a little obnoxious and overbearing when you’re supposed to be learning the ropes.

Far better is the story featuring your own created player. Not only does it open up what you can do, it takes the reins off in regards to the scripting and allows you to play more freely. You play as a rookie at one of a handful of sides, and rise through the ranks to be part of something bigger alongside the established characters in the Tsubasa series.

Each match played comes with objectives that, if met, give you extra points to spend on levelling up your skills, and the overall play of the team and your player are ranked as well. Beyond that, you can unlock special abilities by forming friendship bonds with other young players. After the simplistic and frustrating Tsubasa story, this mixture of visual novel, sports game, and RPG is a massive step up in quality and presentation.

The only major bugbear I had with it was that the focus isn’t so much on your character, but the main team protagonists instead. That’s fine if you play for a different team, but Tsubasa’s story is so repetitive and boring already that another round of his insipid ‘win it all alone, but together…sort of’ nonsense is a bit draining.

It takes time to get used to Captain Tsubasa’s style, especially if you’re coming from the established football titles. It begins as a flashy, frustrating approximation of a sport with a dull, predictable story of friendship, rivalry, and triumph over adversity. It’s could be enough to put someone off before discovering what the real Captain Tsubasa is.

That game is a fresh arcade-style football game that plays like any number of Bandai Namco’s licensed anime brawlers. A game that compels you to play just one more match, even if you have to sit through some inane, repetitious waffle about how these heated rivals now respect one another for the twentieth time in a seventeenth different flavor.

That’s because deep down, Captain Tsubasa’s on field antics tend to be quite satisfying once you know how to play. It takes a good while for the sight of a keeper being driven into the net by your hammer shot to get boring, and in full flow, the football is fast-paced and full of crunchy tackles and scorching strikes. It’s quite simply, a visual spectacle.

Multiplayer could be great, but it relies far too much on every player having extensive knowledge of the game’s particulars to be of any use to a casual player of it. As such, there’s not a great deal of longevity to it.

There’s promise in this formula. There’s no real alternative to the big football titles these days, and arguably, this is as close as you can get outside something a bit further removed such as Rocket League. Unfortunately, in football, fans tend to have short memories and knee-jerk reactions to performances, so for all Tsubasa’s flair and hidden depth, the initial impression of anyone watching him play is that he’s a bit of a one-trick pony with a frustrating tendency to let the game pass him by.

Captain Tsubasa: Rise of New Champions is out now on PS4.

Captain Tsubasa has genuine depth behind its arcade flair, but the initial presentation leaves a lot to be desired thanks to a dull, aggravating, and sluggish introduction to its characters and systems.