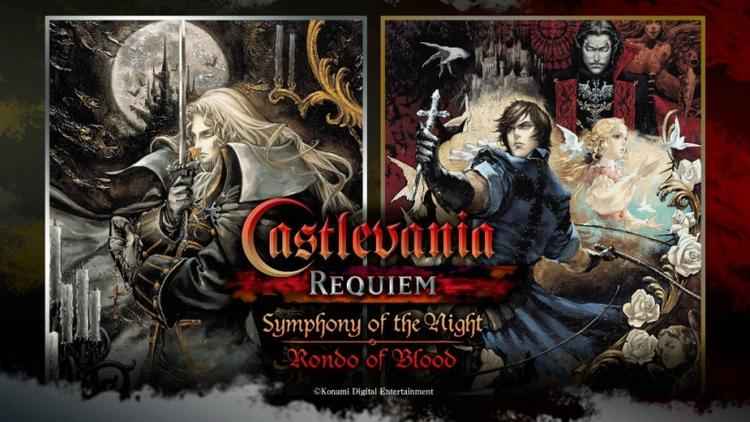 A good game, retro or otherwise, is hard to ignore. Even through the passage of time, a good game has a way of shining through in any gaming generation. All of these things can be said about the package that comes with Castlevania Requiem. Requiem offers up a sequence in this franchise that arguably changed both it and gaming forever in Symphony of The Night. As we all know, Symphony of The Night would not be complete without Rondo of Blood, the second offering in this retro collection.

Not much has changed with these two games since their first release way back when. Here, much like the PSP version from which it sprang, Requiem keeps true to the original vision of these games. Apart from cleaner pixels and a few extra sound bytes, Rondo of Blood and Symphony of The Night are part and parcel the games one would expect to play on older consoles but without having to hook up an old cathode ray tube to do so. This, unlike a recent re-release, ensures that the same retro aesthetic holds up in high-definition. The result is wonderful. It is not visually marvelous, as you would expect, but the wonderful olden style remains. It had been a while since I last played Symphony of The Night. I also had not had a chance to play Rondo of Blood. So, this package appealed to me as a gamer freshly caught in a retro wave. Requiem offers a few visual customization options, including a full screen mode, a progressive and interlaced toggle, and deeper shadow rendering.

I found myself changing all but the interlace, since that kind of linearized visual messed with my head. These are small enhancements, sure, but the game itself requires little in this form. Conversely, even though these titles pair well, especially for $20, this collection offers almost nothing extra. This is not to say that these two games alone do not offer up a great deal of content on their own. Still, no enhancements appear in this product. Arguments for this point balance each other out, really. I mention it simply for the sake of integrity.

Prepare For A Real Challenge

To be incredulously frank, Rondo of Blood is hard. As it comes before Symphony, I began there. “Regret” is not the word I would use, because I recalled one fact in my time with Rondo: “Forgiveness” is void in older games. A level of investment goes into games like this. That investment is something that has carried into the modern era into games like Dark Souls.

Effort, practice, and patience win out, and paramount satisfaction is the result. Rondo, especially, has certain rules that had me changing the way I interpret what I saw. The concept of “hit box” has a fluid definition with each enemy. In particular, the werewolf had a very small hit box itself while I have one that is slightly bigger than my body. Symphony, as precursed above, is what helped standardized the concept behind the term “Metroidvania.” Progression here, unlike in Rondo, is not linear. Learning and understanding the way the game presents itself, once again, is paramount. Symphony is a much deeper gameplay experience as a whole, and these two games compliment each other in that way.

Rondo of Blood and Symphony of The Night are not perfect by any right. They have flaws inherent to their originals. However, unlike glitches and bad programming, these flaws are integral to the product. They create a need to learn the game completely, each baddie, each and every boss, in all its intricacies. Requiem offers very little in new content, but it makes up for it in preserving the original source matter. This very package is available elsewhere as well, as the PSP is where this bundle originated. Fans know what they get with these games.

Castlevania Fans Will Eat Up Requiem

Those curious to explore stepping stones to modern games have an idea of what they will get with these Castlevania games. Newcomers, on the other hand, may not find this package appealing. Intriguing product or not, these games, even if they play perfectly, are dated games. Most collections target a specific group of people, and Requiem is no exception. The price is fair enough, and the product is exactly what it should be. Regardless, Castlevania: Requiem is intended for those with a desire to play it rather than appealing to a general consensus.

Castlevania Requiem brings to modern consoles what made the franchise successful in the first place. Requiem is not perfect and offers little extra in terms of modernization, but it stays true to the original vision.