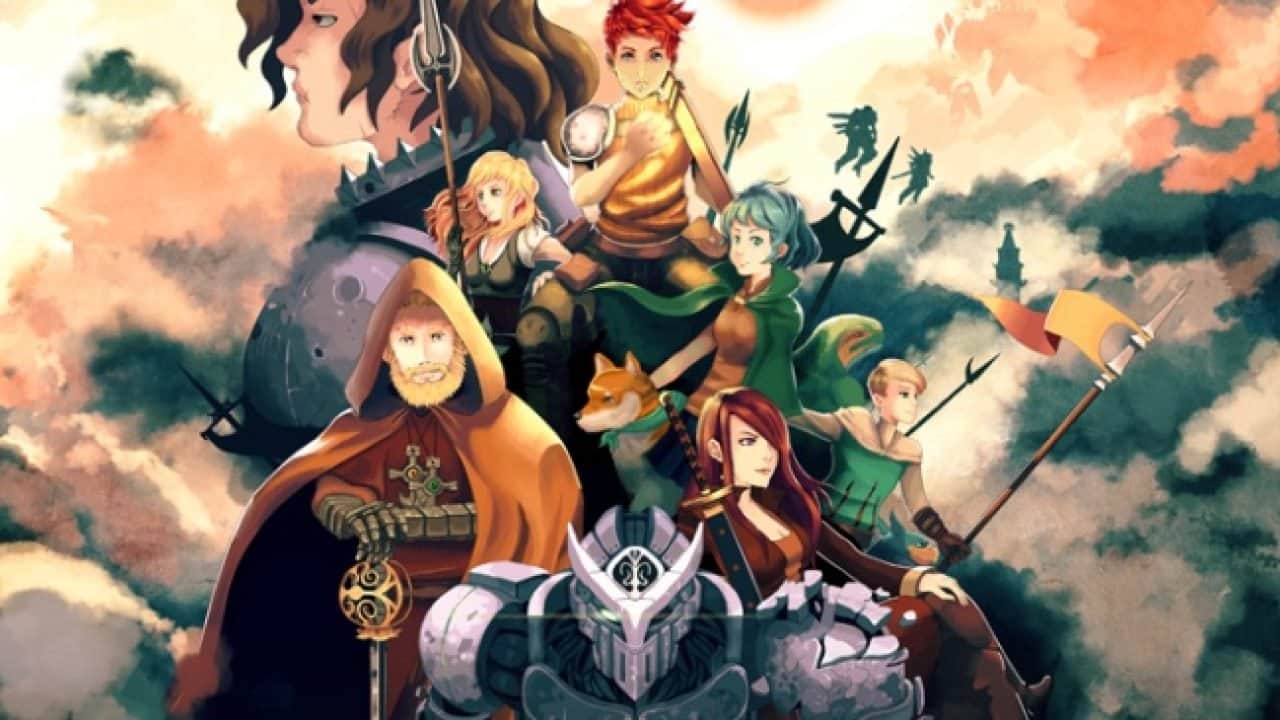 Chained Echoes Review (PS4) – It’s not every day you experience a game like Chained Echoes. Developed by Matthias Linda, the lone developer has achieved a spectacular adventure with great world-building, writing, and a combat system that makes you think about every move you make. Chained Echoes proves that you don’t need the flashiest visuals or the highest production values to achieve something special.

Fantastic Story Brought To Life By Great Characters And World-Building

Chained Echoes tells a story of political turmoil. Unlike most RPGs, Chained Echoes doesn’t follow just one protagonist. The entire party can be considered the heroes of this story, and they all play a vital role. Gleen, whom we start the game with, is sent in with a mercenary squad to destroy a magical gem that is said to be the energy source for a rival nation.

Upon destroying the Gem, it’s revealed that it isn’t an energy source but something more valuable. This act sets the world into turmoil as demons, and evil machinations are implemented. The game jumps between our main party after these events as they have their own goals, but eventually, their paths cross, and they must join forces to escape a demonic attack and stop a brand new war from erupting across the land. 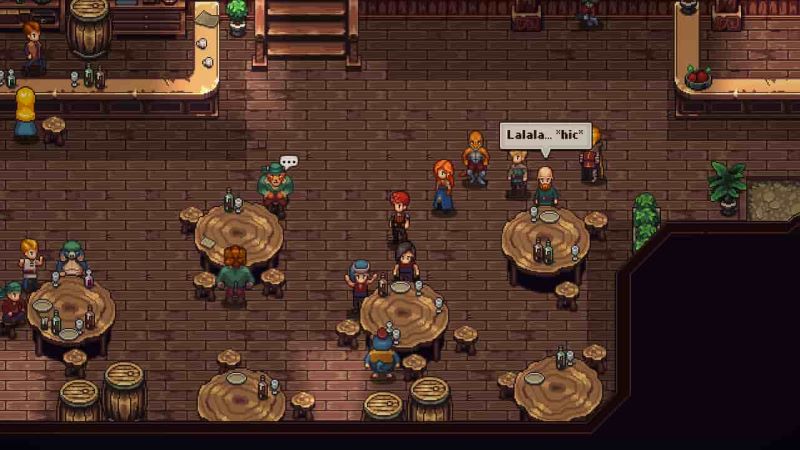 There is a lot to dissect in Chained Echoes story, which I was into from start to finish. The great world-building and characters kept me engaged for hours. The writing is exceptional, and each character comes with their own quirks. Sienna, who instantly became my favorite, is a quick-witted thief who is quick to judge and always points out the apparent kinks in the rest of the party’s plans.

There aren’t large portions of dialogue you have to read through, and the story moves at a quick pace which I appreciated as characters get to the point quickly. NPCs also provide plenty of good hints about hidden quests and treasures. They also offer great information about the world and help with world-building.

Combat in Chained Echoes is a unique take on turn-based combat. It may seem simple initially, but it quickly becomes a strategic fight for survival. Knowing your enemy’s weakness and utilizing debuffs and buffs is key to surviving, more so than I have ever experienced in other RPGs. Enemies can pack a wallop and get hit with de-buffs such as poison, and bleeding can leave you dead in just a few turns.

Each character has a TP gauge which allows them to use their skills. It encourages you to go all out in every fight as soon as it begins. You don’t need to save your TP from battle to battle because all your HP and TP are fully restored after every encounter.

Chained Echoes use a unique system called the Overdrive during combat. As you attack, you’ll build up the Overdrive gauge. This gauge features three different colored bars. Orange, green and red. When in the orange, combat plays out normally. When in the green, you get a bonus of increased attack damage percent and TP cost cut in half. If you reach the red zone, on the other hand, the damage the party receives is increased, and the attack damage you perform is decreased.

Preparation Is Key To Every Encounter

Battles can last a while, and managing the gauge is crucial. To decrease the rise of the gauge and keep it in the green, the gauge will display an icon of a type of ability to perform to reduce the gauge. Once the required skill is performed, a new type will appear to indicate what needs to be done to decrease the gauge.

You also get to pilot giant robot gears in Chained Echoes. Gears work similarly, but the Overdrive bar is changed to the Gear system. It works the same as the Overdrive system, but for individual characters, you can switch your gear from zero to two, and each gear provides various benefits, much like the overdrive system. 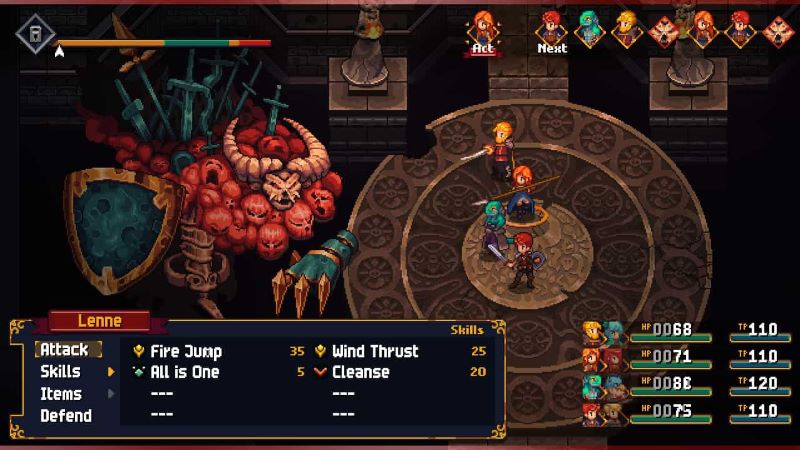 My only issue with the Overdrive system came when I couldn’t utilize a specific ability because the party members were downed or didn’t have the required ability. Of course, that also comes down to how you build your team and the skills you decide to unlock.

Characters don’t earn experience points in Chained Echoes. You earn SP (Skill Points) to level up your abilities. Unfortunately, you get one skill point per enemy that you defeat. The problem is that to level up your skills costs anywhere between 200 to 500 skill points to level up each skill up to three times.

To unlock new skills, you have to earn Grimoire Shards. These are only acquired from defeating bosses and completing quests. There are three sets of skills, separated into three categories: Action Skills, Passive Skills, and Stats Boosters. Action skills allow you to unlock new abilities. Passive Skills are continuously active on your characters, and stat boosters increase man stats like attack and defence. 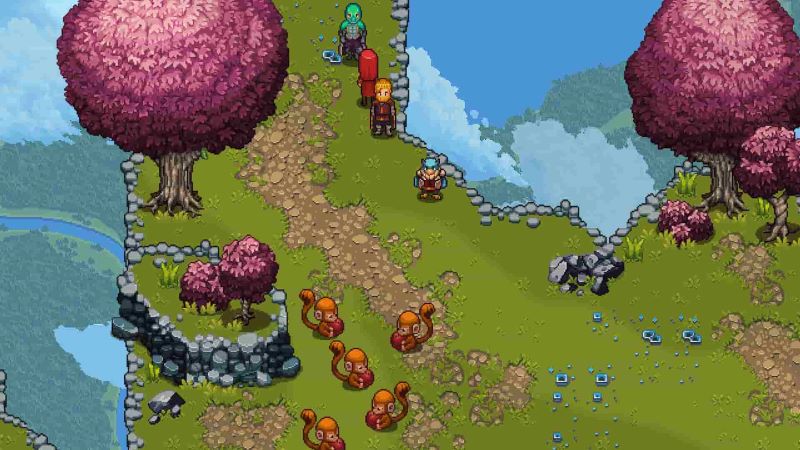 It’s important to note that Stats boosters aren’t the only way to raise your stats, as unlocking some action and passive skills also increases stats. The Stats booster is to give you an extra edge.

Though you can unlock over a dozen action skills, you can only set a handful to your character to use in combat, so you’ll have to think about what skills you need. The good news is if you lose in a battle, you can restart to battle and change out the skills you are equipped with to give you a better advantage.

A Great Crafting System That Borrows From The Best

Chained Echoes also features its own crafting system. You can craft new weapons or armor but upgrade them to use crystals. These crystals act like material from the Final Fantasy VII. You can combine Crystals and forge two different ones to unlock new ones. With these crystals, you won’t get magic abilities, but you can significantly increase your offensive and defensive stats on your weapons and armor. 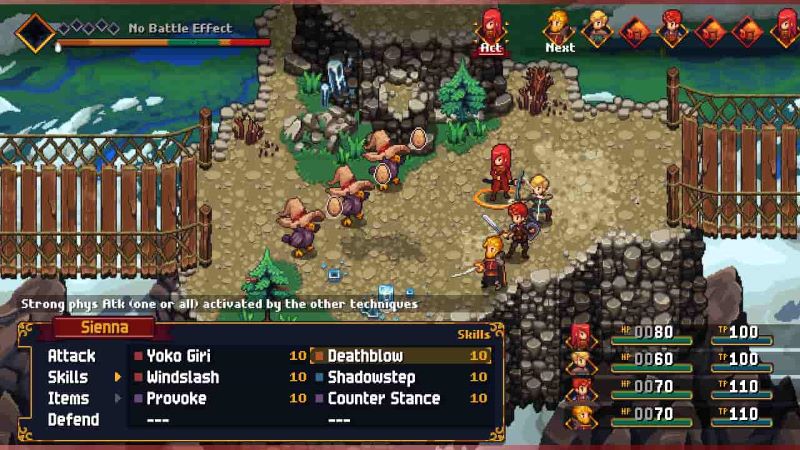 Visually the game’s pixel art is gorgeous, with some great-looking landscapes and attack effects. Its world is given a unique take because of the pixel art, and it reminds me of the grand scale of the world and story, much like Chrono Trigger did back on the SNES. The game’s soundtrack is just as great as the story. The epic score makes it feel like a massive triple-A RPG. Unfortunately, there isn’t any voice acting which I would have loved just because the writing is so good.

Easily One Of The Best RPGs Of The Year

Chained Echoes is a fantastic achievement from a single developer. Its turn-based combat comes a long way and is innovated by the Overdrive system. It’s just a shame that its levelling system takes a while to feel rewarding.

Chained Echoes has a big story to tell, and it tells it well with unique characters and writing making it one of the best RPGs of the year and has earned a spot on the pedestal next to greats like Dragon Quest and Final Fantasy.

Chained Echoes is now available on the PlayStation 4 and PlayStation 5 via backwards compatibility.

It's not every day you get to experience a game like Chained Echoes. With an incredible story, excellent writing, characters you can connect with and a combat system that takes a traditional turn-based system and turns it into a strategic, thought-provoking experience. What's not to like about that?