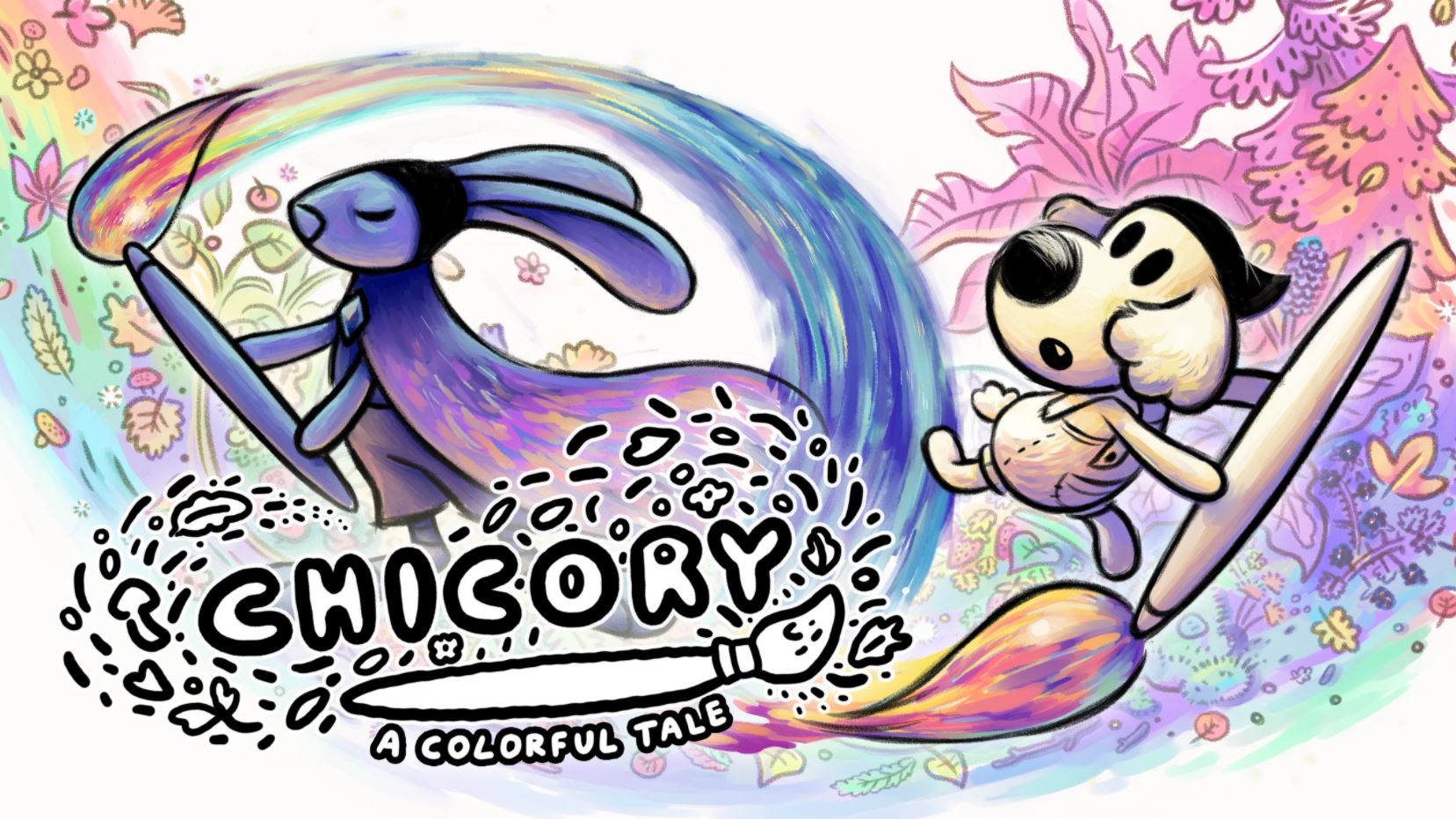 Chicory: A Colorful Tale PS5 review. You may be familiar with Greg Lobanov’s work thanks to his recent indie hit Wandersong, or you may have played one of his lesser-known titles in the past. If you delve back through his portfolio you can see that his bright and vibrant style has become something of a trademark at this point, as it’s been present throughout his career.

Chicory: A Colorful Tale’s name suggests that we have another colourful adventure from Greg Lobanov on our hands, however, this top-down Zelda-like world is entirely monochrome thanks to a series of events that unfold in its brief introduction, and it’s your job to wield the Picnic Province’s magic paintbrush to restore some hue to the world and its anthropomorphic inhabitants.

A Wonderful Adventure From Beginning to End

Initially, the controls can feel quite unwieldy, using your left forefinger to pull L2 to paint and using the left stick to move your character, while either the right stick or touchpad is used to control the paintbrush’s cursor with your right hand. It’s definitely better-suited to PC with a keyboard and mouse, and sadly there’s no option for this control method on PlayStation 5, but it shouldn’t take too long to click – and once it does, Chicory arguably offers one of the most meaningful uses of the touchpad since Sony introduced them to its controllers in 2013. 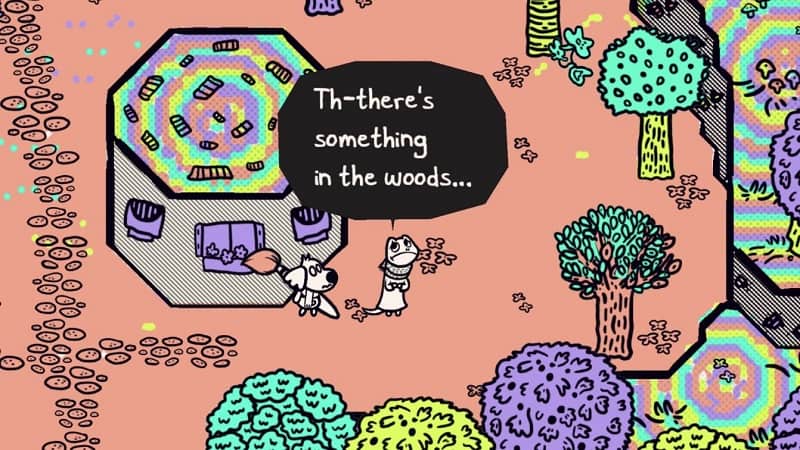 If you do struggle with the controls during the particularly frantic boss fights, you’ll be pleased to hear that its accessibility settings are fantastic with a selection of modifiers ready to assist you, ranging from reduced reaction speed requirements, additional player health, or the option to skip boss fights altogether. And despite its subject matter, the colours you paint with your brush aren’t actually fundamental to the puzzles so it’s possible to fully enjoy the game as a colour-blind user.

Chicory: A Colorful Tale is a game of two halves, then. The Picnic Province is filled with lovable creatures who wouldn’t hurt a fly, so there’s no combat to speak of in the overworld. Instead, you’re faced with a stream of puzzles reminiscent of Zelda: A Link to the Past.

Everyone is different, but the learning curve was absolutely spot on for my taste. Yes, there were a few head-scratching moments, but the developer does a great job at introducing a concept and encouraging you to learn to leverage it into solutions through play. It’s no Maquette or The Witness, but if you do come unstuck, there are phone boxes scattered throughout the world which let you phone home and speak to your parents, who will always be on-hand to either give you a gentle nudge in the right direction or give a step-by-step guide to solve the puzzle you’re stuck on. Much appreciated! 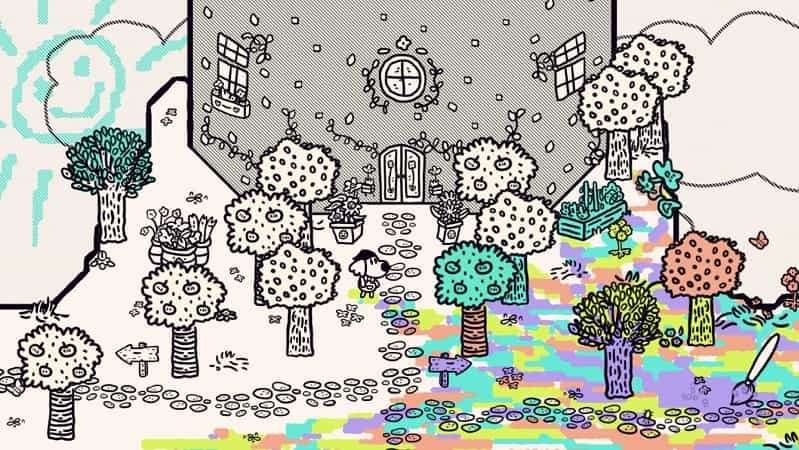 Combat is reserved for a handful of boss battles that flip the gameplay on its head. Chicory almost becomes a bullet-hell shooter with the brush acting as a weapon against the personified demons of your character and the titular Chicory’s minds. Yes, despite its cutesy aesthetic and cheerful exterior, A Colorful Tale weaves some heavy themes such as depression, anxiety and imposter syndrome into its narrative, but does so tastefully and with optimism.

Lena Raine, of Celeste and Guild Wars fame, is behind the soundtrack and she’s done a sublime job of keeping pace with the gameplay. Wistful melodies and jaunty bops spur you on through the overworld, while the dungeons and boss battles are accompanied by haunting compositions that make your character’s inner demons a little bit more ominous.

Conquering each demon will earn you a stronger bond with your brush, unlocking new abilities and ergo opening up previously inaccessible areas in a Metroidvania-esque fashion. Some are simple abilities such as jumping, while others really add nuance to the gameplay with the ability to lighten pitch-black caves, and another lets you swim through any painted surface a-la Splatoon. Clocking in at roughly twelve hours, these power-ups keep Chicory fresh from beginning to end, with not an inch of filler to be found. 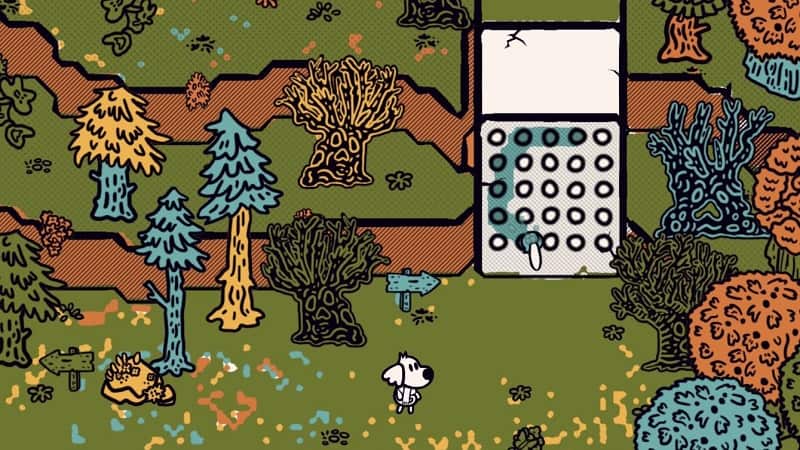 It’s all praise from me; I don’t have a bad word to say about Chicory: A Colorful Tale on PS5, except its technical instability in the early days.

It’s easily avoidable by changing your system settings, but each time my DualSense turned itself off while I was making a cup of tea or taking notes for this review, the game would crash and exit back to the PlayStation menu. Rather annoyingly, the same happened during the game’s credits but thankfully it didn’t prevent the trophy for completion from popping.

Chicory: A Colorful Tale is out now on PS4 and PS5.

Greg Lobanov has produced a game that has it all. It’s a truly heartwarming story with unique gameplay, clever puzzles and a colourful cast of characters in a gorgeous world that never feels limited by its retro-inspired, two-dimensional roots.