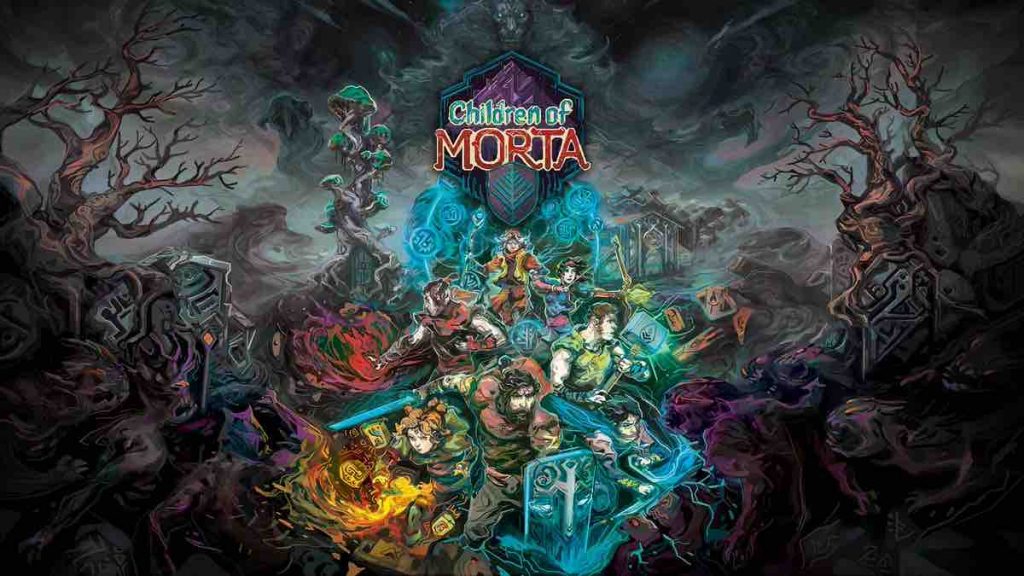 If you were to say that the top-down, indie roguelike dungeon crawler template is now getting a little stale, I’d say that you would be pretty much correct in that assessment. So it is then that we come to Children of Morta, an almost expectedly attractive pixel-art effort that aims to freshen up the status quo by introducing that which is common to most of us – family.

Keeping It In The Family

As the Bergsons, a somewhat overachieving family of adventurers, the player is tasked with stemming the seemingly relentless tide of an evil entity known as the Corruption, as it pours down from Mount Morta and unto the lands below, twisting and subjugating everything in its path. More than just a frame for the story, Children of Morta’s familial setup plays directly into how the game unfurls too.

Crucially, each sibling plays different from one another too. Linda is a talented archer type whose bow attacks keep the enemy at bay, quick-bladed Kevin becomes faster with each strike, while John, the starting character, is more of your regular bruiser type, a melee warrior who prefers to get up close and personal with his foes. Regardless of who you have under your yoke, Children of Morta acquits itself very well as a robust dungeon crawling effort – employing satisfying attacks, artful dodges and a variety of upgradeable special attacks that are unique to each family member.

Delving deeper, combat largely revolves around the astute maintenance of stamina and knowing when to dodge at the right time. Linda for example, will use stamina whenever she moves and fires her bow at the same time, neatly preventing players from cheesing the game by moving and shooting ceaselessly without penalty, while young assassin Kevin uses stamina more efficiently; allowing players to evade more times in succession, but for whom extremely close (and dangerous) combat is the only option.

Nowhere however, is Children of Morta’s combat system better showcased than in its scintillating boss fights. Multi-phase trials of evasion, endurance and damage output, whether it’s a massive spider and her murderous brood or a towering corrupted golem, these challenging scuffles are high level tests of a player skill and as such, there’s no shame to shuffling off your mortal coil upon your first meeting with these monsters.

While you’ll die and do so often, Children of Morta does that thing which all great roguelikes do, in that death doesn’t act as a deterrent but rather as an incentive, as each time you start a new session you find yourself stronger and more capable. In addition to fairly basic skill trees for each of the family members, Children of Morta has upgrades which persist across the entire family too. Reach a certain level threshold and all of the combative siblings will gain a bonus to their critical chance, for example. In another instance, incrementing the attack and health stat from gold amassed at the end of run ensures that all members enjoy those benefits too.

On a more granular level, numerous obelisks can be found around each dungeon and when activated, provide short term buffs such as extra critical wounding or a pulsating damage shield to help you along your way. Additionally, relics and a range of other magical items can also be turned to your employ, providing such welcome buffs as poison strikes, a damaging force field and the ability to summon monsters to help you in battle, to name just a few.

Here’s another thing too, the Corruption that has afflicted Mount Morta is all-pervading, and if you happen to send one particular family member down to the dungeons too often, they will become fatigued in turn; suffering a massive debuff to their maximum health in the process. As a result, this neat little mechanic works wonderfully in how it encourages players to try each of the siblings in turn, varying the game’s hack and slash playstyles as a result.

Elsewhere, dungeon layouts are randomised and stuffed full of surprising events and things to do other than murder and loot things. In one example, I stumbled across a scene in a cave where a mother wolf had been slain and the young pup was bravely, though foolishly, attempting to defend her mother’s remains from the Corruption. A quick battle later and the wolf cub joins the family, opening up a side quest for you to cure its ailments from vegetation found in the caves in which the poor thing was found.

Further varying affairs are special events, such as timed arena style encounters where, if successful, you stand to gain magical items such as faster movement boots that make your life easier, escort side-quests and switch-based puzzle conundrums that all contribute to alleviating the potential monotony of Children of Morta’s base hack and slash gameplay.

Children of Morta Is A Beautifully Presented Effort

Where Children of Morta manages to distance itself from other games in the genre, is in how it really focuses in on the theme of family. In addition to stepping into the shoes of each member, linking up every attempt at a dungeon is a narrative cutscene which not only delves into the circumstances and the everyday life of the Bergsons, but which also propels the story forward, often unlocking a new member of the family for players to use while the ear-stroking, Mark Strong style narrator provides an engrossing voice over.

As with all dungeon crawlers of one persuasion or another, Children of Morta ostensibly plays better with friends and in this, the day one local co-op mode proves to be most welcome indeed. All the same, the omission of online co-operative shenanigans proves to be sorely observed. Another chink in Children of Morta’s otherwise grand armor is the slowdown which occasionally threatens to blight proceedings during busy encounters; something which, hopefully, can be resolved by quick patching in the near future.

Just when you think nothing more can be done with the top-down, roguelike hack and slash genre, Children of Morta comes along to prove you wrong. Leveraging the theme of family in ways that are both meaningful in functional and narrative terms, Children of Morta is a surprising fresh take on the genre that demands your attention in earnest.

Children of Morta is a handsomely crafted dungeon crawling effort with a stirring narrative that freshens things up on account of its familial theme and structure. The gorgeous presentation and resolutely solid hack and slash beats are supported by some surprising mechanics and flourishes that help to ensure that Children of Morta is one of the most pleasant surprises of the year.