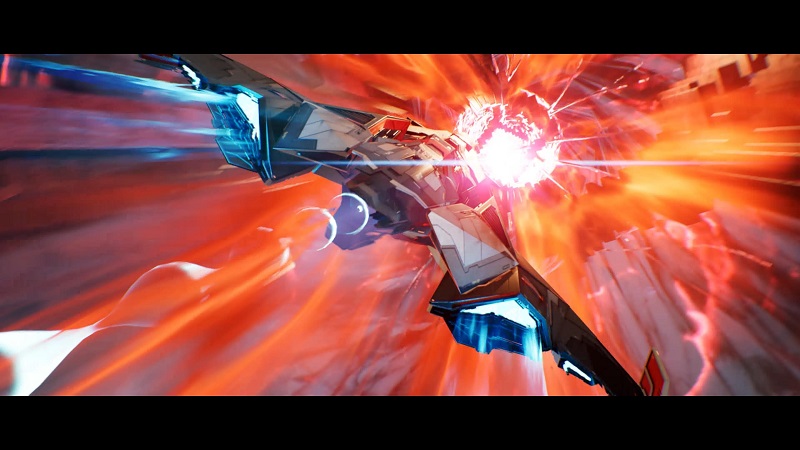 Chorus Review (PS5) – Sometimes, to shake things up all you need to do is change a bit of scenery and setting. That’s a good way to think about Chorus, a game that follows a mostly linear and familiar feeling narrative, but instead of it being a third-person, over-the-shoulder adventure, you’re in space. In a ship. All the time.

It’s not really a bad thing, because being in this ship is really, quite awesome. What’s so bad about flying around in a ship that’s also your BFF shooting up tyrannical cultists? Nothing, it would seem. The combat in Chorus almost never fails to be fun while still cinematic, and though the story felt familiar, its characters helped make the game feel unique. It’s really a shame that the ending absolutely crash lands the way it does. 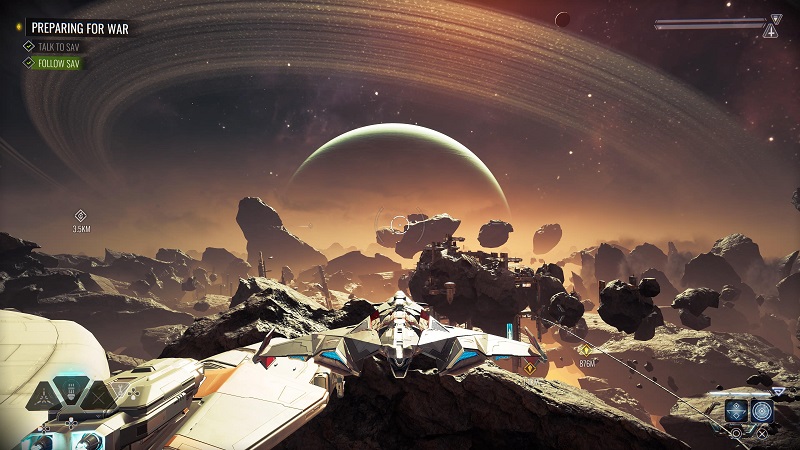 Chorus follows Nara, a former member of the Circle, your average tyrannical evil power in the galaxy wanting only their will and domination to endure. They’re also the kind that believe their murderous work is to achieve a kind of religious higher state of being, to be “in Chorus.”

When Nara was still a part of their ranks, she murdered billions. Forsaken, her ship, saw the whole thing, including the point where Nara couldn’t believe what she’d done. Disgusted with herself, she burned away her power, left Forsa(ken) somewhere safe and tried to live on as a scavenger.

The Circle however eventually catch up to her simply through their effort to “cleanse” the galaxy, and it’s clear Nara can’t hide anymore. She goes back to Forsa, so they can finally defeat The Circle together, and kill the Great Prophet.

It’s all very high stakes and a typical kind of sci-fi story, but the basic plot works well to channel the main cast of characters into interesting situations in both story and side missions. So yes it still felt familiar, but the characters themselves were written and voice acted very well.

Forsa and Nara are the glue that hold the story together, as the rebuilding of their relationship helped to become part of my drive while playing, to see how they would build the trust they once had for each other.

For a game that only had a few cutscenes overall, with most of the narrative being shared during gameplay, it all worked very well. Even with a predictable plot, it was entertaining to say the least. Except for the ending, but we will get there.

Tokyo Drift But In Space With Guns 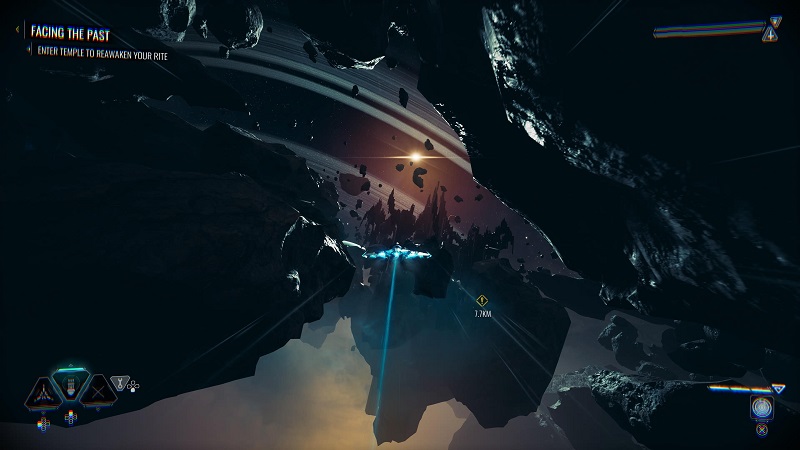 “Tokyo Drift but in space with guns” means exactly what it sounds like it means. The story being as good as it is was honestly a surprising delight, but it was the gameplay I expected to shine the most, and boy does it shine. I know I’ve already hinted at a bad ending but the movement and combat in Chorus is truly unlike any other space-fighter or aerial combat game I’ve played.

Part of that is because the game focuses on making you feel ultra-powerful. Before the game is a quarter of the way done you have enough firepower in your arsenal between your Rites (abilities) and your weapons to do some serious damage even late in the game. Plus, you can truly move like no other enemy can, which is your biggest advantage.

Forsa can drift in space, giving you the freedom for sharp turns that otherwise wouldn’t be possible. It allows you to get the angle on an enemy, or three. It can also make you very difficult to hit if your flying skills are up to par, and is the one mechanic which makes everything about the combat and flying controls work really well.

Your weapons are also very easy to switch between, each of them having different tactical purposes. You swap between an automatic gun, a laser gun, and a missile launcher within seconds of each other, meaning you can use each of them in quick succession to destroy enemy defenses.

It’s no stretch to say that the reason to play this game is to Tokyo Drift around your enemies to shoot them in the face. It’s a feeling that never gets old, especially during the very intense battles you’ll fight where you are swapping between weapons, drifting around everywhere, dodging enemy fire, all while dwindling their numbers.

That’s what made me want to keep playing through the game. Having the story drive me as well was a nice bonus, but the gameplay is so fun that it makes the controller difficult to put down.

Space, The Final Frontier – Or Not 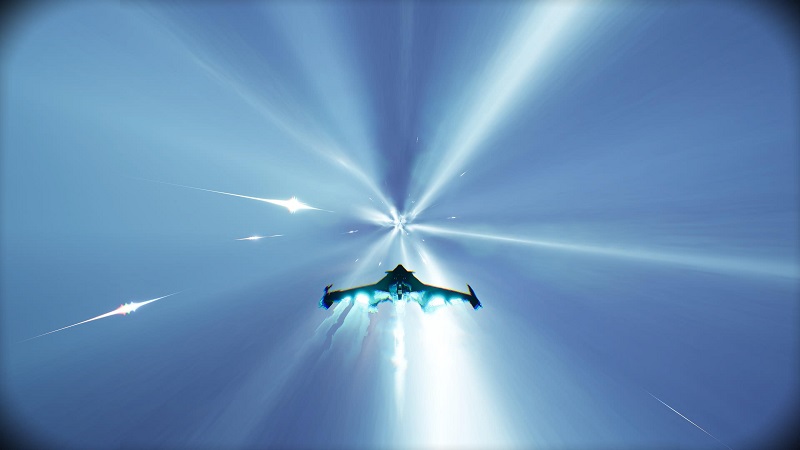 Before you get into the combat though, and before the story potentially engrosses you in Nara and Forsa’s relationship, the first thing you’ll really notice is how beautiful this game looks. I don’t think I’ve ever seen a game set in space so well detailed and realized.

It also helps that each small pocket of space you preside in acts like its own mini sandbox. Flying around only to find hidden items, a quick side mission, or even just to gaze at the stars help make what’s otherwise an action packed game slow down.

Not that it really needed a break in the pacing like that, but it was nice to feel like I could take that whenever I felt the urge. The deeper into the game you go, the more visually stunning it becomes, whether you’re out in space or deep in the void, a realm beyond your own.

Thankfully there is a photo mode which you can end up spending a lot of time in if you’re not careful. So when you do see something that makes your jaw drop, you can, as I did, stop whatever you’re doing and spend the next 20 minutes capturing the perfect image. 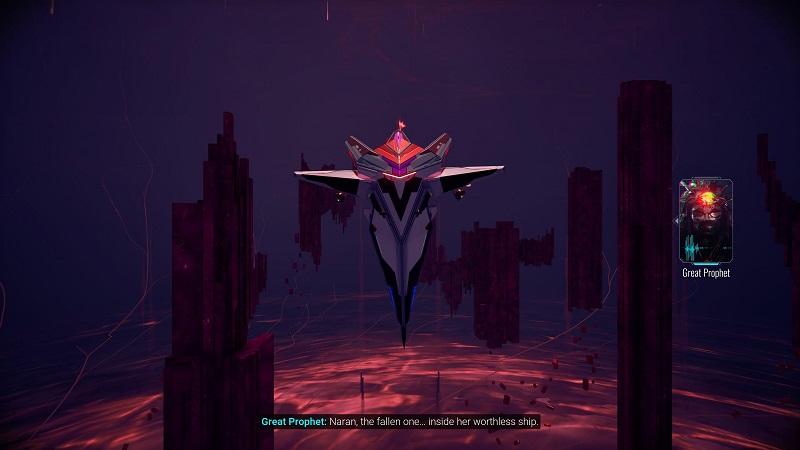 I’ve spent about a thousand words give or take generally praising Chorus. It’s a good game overall and one that I really do want people to try for themselves, but what really makes me hesitate is the ending. As I’ve already alluded, the ending does not do the game any favours, at all.

It’s definitely an ending, and wraps up the storyline in a neat bow, but the final boss fight is so much of a slog that it genuinely ruined my experience playing. Essentially the final fight consists of you flying in a circle through a big narrow space, while after the boss.

There are beams of harmful electricity which stretch out across the space that you need to avoid, while also avoiding mines and enemy fire. That on its own, truly wouldn’t have been that bad. What puts things over the top is that there are also these giant red pillars which will shoot from one side of the enclosed space to the other, blocking part of your path and forcing you in a specific direction.

I realized after the first few times I died to a pillar appearing in front of me with no warning that there is a pattern to when they appear, but the game gives you no warning signs as to when they will. If they did though, they wouldn’t even work, because every pillar creates sparks and sounds like an explosion, on top of the explosions you’re already trying to avoid from regular combat. 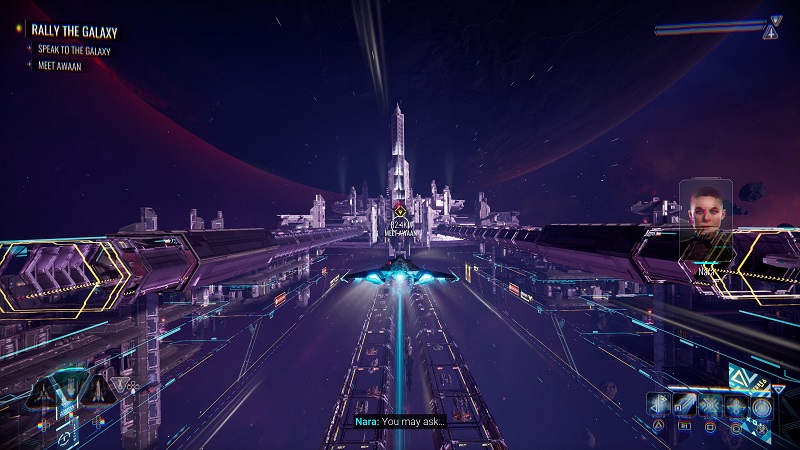 It all amounted to being just too much happening on screen, to the point where I could barely see my ship while flying. After holding the line between chaotic firefights and cinematic ones the whole game, the final fight goes way over the line, and it’s just the worst player experience I’ve had in a long time.

Nothing about this felt like a final fight. My fight was more with the the red pillars that furnished the corridor, rather than the boss. There are parts of the fight where you’re back in an open area, fighting a large version of the final boss but that was just a copy/paste version of an earlier encounter.

I don’t have the words for how upsettingly poor this fight was. I wouldn’t wish for anyone to play that final fight, especially after experiencing the well-executed combat up until that point. It feels like nothing more than a half effort, and a disappointing one at that.

When I had finally beaten the game I only felt relieved it was over, and I didn’t have to go back to do it again. If I could, I’d go back in time and tell my past self not to play the final mission and stop just before it.

If Chorus was a plane, this ending or “landing” would leave the plane smashed to bits, absolutely no hope of repair or re-use.

Despite a truly abysmal ending, there’s so much more about Chorus that makes it worth checking out. The dogfighting is stellar, so much that even repetitive feeling missions were still fun by the end. I personally enjoyed the story, and thought it was pretty dope having a Kitt equivalent travel the stars with you shooting up cultists.

It’s a gorgeous game to look at and the flying feels really, really good. Its basic upgrading system works well to let you build a strong ship early on, with credits being plentiful through discovery and side missions. Weapons and abilities otherwise simply upgrade by playing the game, and the power trip you feel at the beginning keeps its way through till the end.

I’ve just never seen a full almost 15-hour experience ruined so quickly by a frustrating ending. It’s a shame, more than anything, because there is an otherwise really fun game here.

Chorus is now available on PS5 and PS4.

Chorus is a mostly good game, with excellent dogfighting and gameplay that always feels fun to pull off. It also looks gorgeous and can make for an entertaining narrative, even if it's not really breaking the mold too much with its plot. Still, it's almost tragic how poorly the game's ending lets down the rest of the solid work that made everything else about it so brilliant.