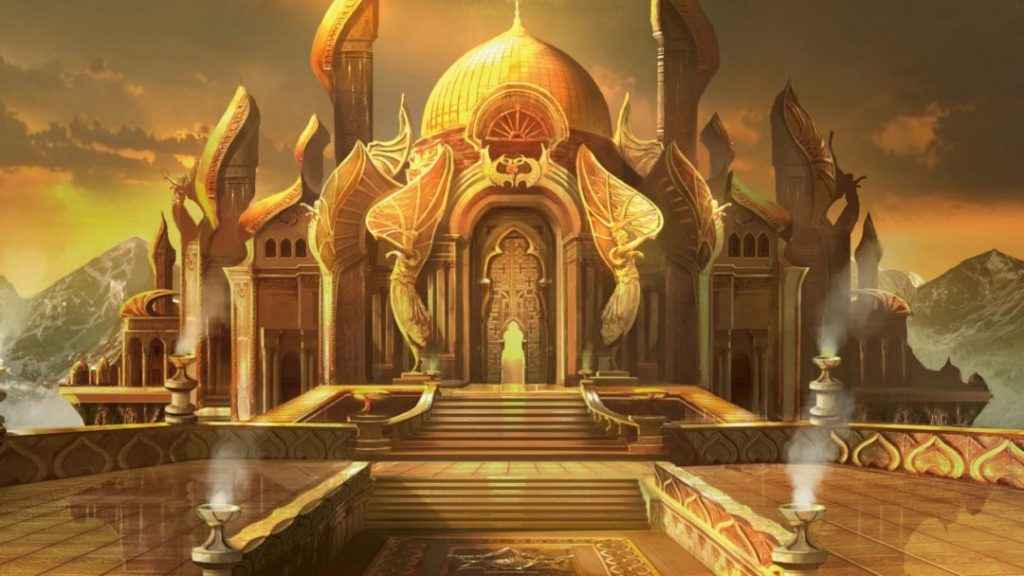 City of Brass review code provided by the publisher

City of Brass has an instant freshness to its approach. Uppercut Games has made a roguelike but in first-person. It’s first-person, but combat involves a sword and whip. To top it off, the setting is based upon the criminally underused Arabian Nights.

It’s this fresh approach that helps keeps it interesting far longer than if it went for the most cliched routes. While that’s nice to see, it lacks something in its core gameplay loop that is essential for a roguelike.

The brief story of the City of Brass sees you, a thief, entering the titular city of legend in an effort to steal the treasure at its center. It’s a regal-looking place that will be immediately familiar in style to anyone who grew up on Disney’s Aladin and Ubisoft’s Prince of Persia.

All well and good, apart from the fact it’s a cursed city full of traps and monsters, and one that changes and shifts every time you fail.

Yes, the old leaning post of procedural generation is administered for the City of Brass, and it ends up being too much of a crutch. As with much in this game, the changing setup of the city is an enjoyable distraction. You still get pointed roughly towards your goal, the only problems you face are in defeating the monsters and avoiding the traps along the way.

Games of a decent level will have at least one moment where everything clicks to show you the full potential available. City of Brass is no exception. Its moment comes around once you have a grasp on the game’s rules and controls. The stop-start occasionally sluggish combat encounters and desperate fumbling to find a hook or platform to fling yourself past enemies?

This melts away and the whole thing lines up beautifully as you effortlessly glide around the map, dispatching enemies with all the skill and grace of a balletic warrior. Your whip pulls enemies towards you, and you duck n’ weave whilst slashing your sword at them.

It’s a tough balance to get right early on, as this is not well suited to a controller due to the reliance on precision, and the hit detection has the odd frustrating hiccup. Yet you can master it to some degree with a little time investment and as mentioned, it’s quite joyous when it works.

The problems tend to come when that fast n’ fluid pace drops back down. You see too much of what isn’t there.

Take the level design. Visually-speaking it is rather lovely. Vibrant and endearing without diving too deeply into being cartoonish. There’s a warmth to the Arabian Nights aesthetic. In more technical terms the game’s reliance on procedural generation does a disservice to the art style. The random nature of procedural generation means each area is hit and miss in execution.

Yes, you occasionally get the luck of the draw and get an excellent area, but nowhere near enough does that happen. The personality gets sucked out of City of Brass whenever the level design offers up something that denies the fluidity needed for the game to sing. Team that with limited scope in the city design (4 mildly different styles of area across 12 levels) and it’s a clear warning that combat and traversal need to be able to overcome this problem.

Which, you might have already guessed, isn’t always the case. Boss fights are a particular issue. They don’t require any proper tactical thinking, they’re just a bit tougher than the regular enemies. Each one is more of a drawn-out slog than a thrilling one-off encounter. Quite honestly I found myself wishing I could go back to the regular battles with the underlings every time.

What makes the regular fights interesting is that they can be tackled in multiple ways. You’re usually swarmed by enemies and utilizing the environment’s traps and escape routes become key to survival and your enjoyment. Corralling baddies into a spot before setting off an explosive trap is an extremely satisfying feeling. Power is secondary to speed in City of Brass.

At its best, it employs the same reactionary skills of a swiftly-paced first-person shooter. That’s where it suffers too of course. When forced into slower scenarios, the fiddly nature of the controls becomes an inelegant frustration. Getting headbutted to death because the swing of a sword was really difficult to judge is tough enough to take, but when it happens during a slower moment, it’s highly frustrating.

The Best Indie Games on PS4

An upside that knocks some of these problems on their collective behinds, at least in the short term, is the in-depth difficulty options. City of Brass can be a tough mistress, but Uppercut has given a wealth of tweakable options to suit all sorts of playstyles and time constraints without ever removing the core challenge.

Also, there to help you out is an in-game upgrade system where you can unlock stronger weapons or more health. It also has short-term boosts like trap deactivation, a spiritual co-op partner and so on.

City of Brass shows its hand early in its tricks and underused setting. This, unfortunately, exposes the game’s shortcomings as a long-term time investment. A typical successful run takes no more than a couple of hours, and by the time you have finished two runs, there’s almost nothing left to see. It lacks a dazzling gameplay hook to encourage multiple playthroughs, and that’s as good as death to a roguelike’s chances.

That’s not to say there’s in point investing your time in it. It’s unique enough that it is worth experiencing, but not the essential purchase you’d like to be making.

There's promise to City of Brass that sadly doesn't quite come to fruition. For a roguelike, it commits the ultimate sin in having no compelling hook to keep going for multiple playthroughs. It throws up some fresh and interesting ideas though, and that makes it worth at least a cursory look.