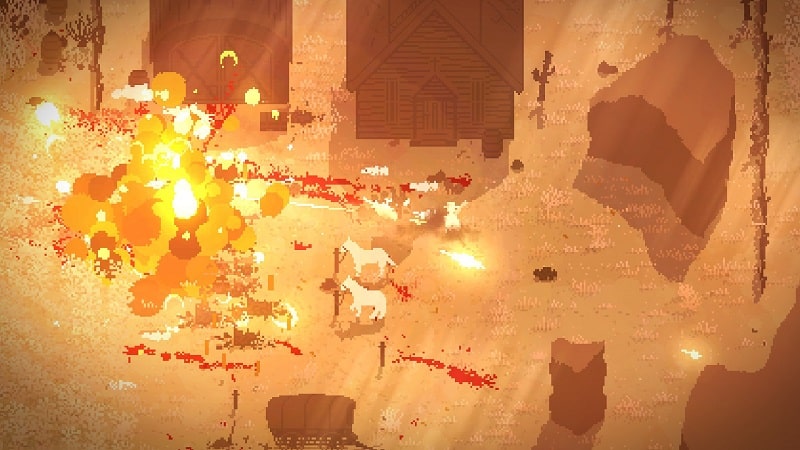 Colt Canyon PS4 Review. In spite of the substantial charm inflected by its functionally simplistic but wistful Atari 2600 style presentation, Colt Canyon permits some surprising and highly satisfying feats of badassery. Certainly, it’s difficult not to marvel as your blocky gunslinger performs an adorably janky tumble-roll before carving one bandit almost in twain and then using a shotgun to blow another across the canyon floor.

A top down, twin stick shooter with roguelike design DNA threaded through every blocky pixel, Colt Canyon is the sort of effortlessly accessible and enjoyably straightforward roguelike shooter beats that feels refreshing In an era of 100 plus hour long, busywork stuffed blockbusters. Colt Canyon’s greatest strength is arguably its simplicity and it’s a maxim which can be observed in every aspect of its design.

The plot is appreciably threadbare by necessity. After being left for dead by an outlaw attack, you must regain your strength and track down your missing partner. It’s the basic premise of John Wayne and Clint Eastwood westerns for sure, but unlike its silver screen counterparts, there’s no imperative here to develop the narrative as it simply exists to service the equally straightforward gameplay. 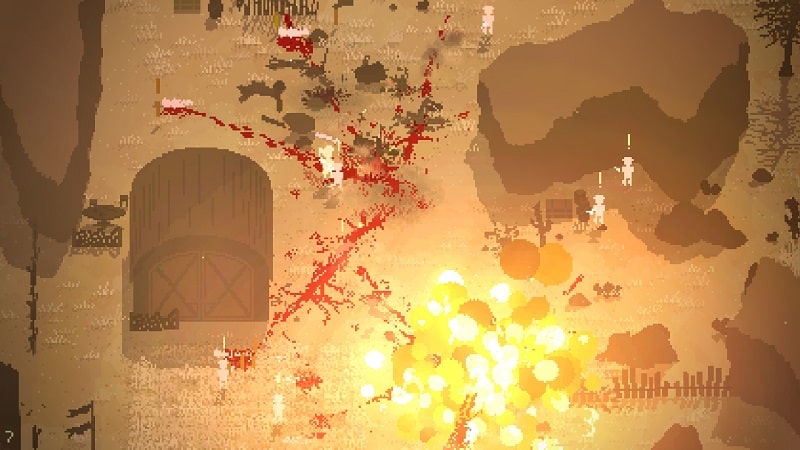 Levels are randomly generated and embrace that old fashioned arcade tenet of proceeding from left to right in a stage, laying waste to everything in-between. Along the way players will scoop up new weapons, ammo, health and so on while the occasional vendor will be happy to trade you some gear in return for some health or particular types of ammo. Refreshingly for a western, Colt Canyon doesn’t have a traditional unit of currency.

So far, so twin-stick shooter then, but there’s a fair amount of nuance lurking under the leathery, sun-blasted skin of Colt Canyon too. Paramount to not ending up with a face full of pitchfork, bullets or buckshot is being able to move and shoot at the same time. Sure enough, this might seem like obvious advice given the twin-stick shooter genre bedrock of Colt Canyon, but developer Retrific has implemented an evasion and timed reload system to keep eager gunfighters on their toes.

The end result is a smoothly flowing ballet of Old West violence, as you cartwheel away from incoming shots and melee those closest to you while unleashing long-distance devastation on those foes at further remove. Also essential to managing that flow of crimson and bullets is the reload mechanic.

Each projectile weapon that you can equip in Colt Canyon not only takes a different amount of time to reload when compared to its other counterparts, but also greatly reduces your movement speed too. As a result, knowing exactly when to reload and endure that reduced movement penalty during battles proves essential to your survival – and it’s a masterful dynamic that each of Colt Canyon’s challenging bosses play upon too. 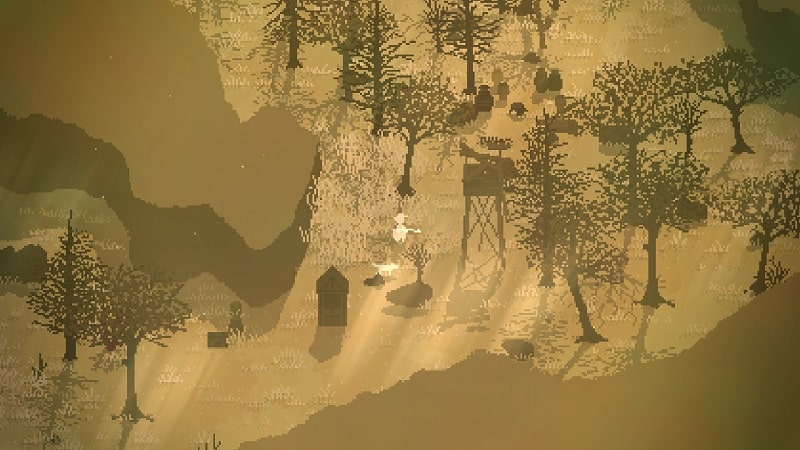 Even though Colt Canyon outwardly appears like something of a dunderheaded twin-stick shooter to uneducated eyes, players are actually given a fair degree of freedom as to how they approach each situation rather than just defaulting to the guns blazing approach (though you can if you like, obviously).

Indeed in Colt Canyon, you can use stealth to get right up close to your adversaries and do away with them with a single attack, neatly saving you precious ammo while keeping your presence concealed from other enemies in the area. While in another scenario, you might want to start a firefight with multiple foes and lure them back to the vicinity of an explosive barrel, shoot said barrel and turn them all into bloody chunks. The choice is yours and it feels refreshing to not be funnelled into a particular approach in a twin-stick shooter like this.

The roguelike elements which blend in so well with Colt Canyon’s genre fundamentals also help to provide yet further depth. At the beginning of the game, you have just one protagonist to choose from with more characters being unlocked the more you play. Much more than just a cosmetic variance, each character boasts not just different health, strength, movement speed and other stats, but also different weapons too with more implements of violence unlocked further down the line. 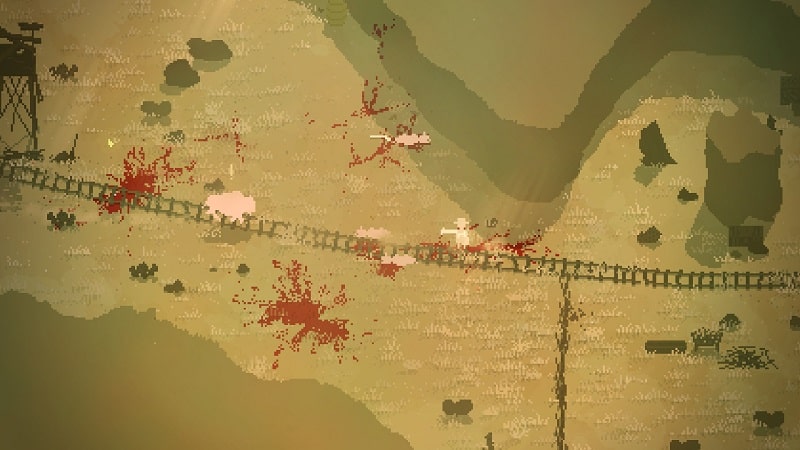 Elsewhere in further leaning into the roguelike aspects of its design, each level in Colt Canyon has a prisoner which can be rescued. Whether they’re freed from basic shackles or blown out of an iron casket with dynamite, these wretched souls will be happy to see you – so happy in fact that they’ll grant you one of three stackable upgrades or allow you to take them along with you on your blood-soaked and bullet ridden odyssey.

When taken in tandem with the different characters that you can choose from and the various weapons you can use, these upgrades play a key part in allowing players to embrace a bespoke playstyle. Want to focus on stealth and melee attacks? You can. Likewise, if you want to forsake upgrades for a refresh of health and resources just before a boss encounter, you can do that too. Don’t let Colt Canyon’s looks fool you; this is a roguelike, twin-stick shooter with ample depth to spare.

And then there’s the local co-op. That’s right – Colt Canyon can be played locally with another flesh and blood human being and with it both the challenge and the satisfaction of blasting through the game increases duly. Where Colt Canyon trips a little though, is in how game saves are handled, insofar as they aren’t really handled at all.

Without any kind of manual or autosave, whenever you quit out of Colt Canyon your progress during that playthrough is lost. Now sure, Colt Canyon isn’t the biggest game in the world but having to commit to an entire playthrough each time you pick up the pad takes some of the sheen off of Colt Canyon’s pick up and play allure. 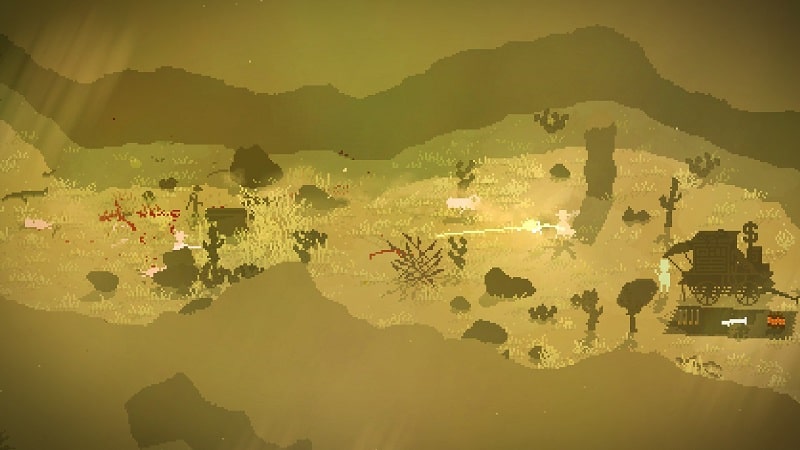 In terms of presentation, though Colt Canyon’s blocky retro visuals might lack the technical sophistication one might expect from more contemporary offerings, the sense of place that is created by such humble pixels is romantically palpable nonetheless. Whether it’s the dusty, long-abandoned husk of an old frontier settlement, or observing various critters skitter across the floor of canyon while tumbleweed lazily rolls into the shadows of the towering peaks that surround the environment, Colt Canyon is beautifully understated in its visual portrayal of those Old West badlands from yesteryear.

The sound has also been granted similar considered craftsmanship too. All the guns that you fire in the game have sufficient pop and feel satisfyingly meaty, while the harmonica and light strings that form the core of Colt Canyon’s soundtrack deftly support the visuals which do such a commendable job of nailing that Old West atmosphere.

Colt Canyon is out now for PlayStation 4.

Colt Canyon is really just what the doctor ordered to kick off 2021. A breezy and consistently satisfying twin-stick shooter roguelike with a surprising amount of depth and where gunfights, stealth murder and dynamite powered destruction go hand in hand, Colt Canyon is a smart, wild west shooter that's well worth saddling up for.