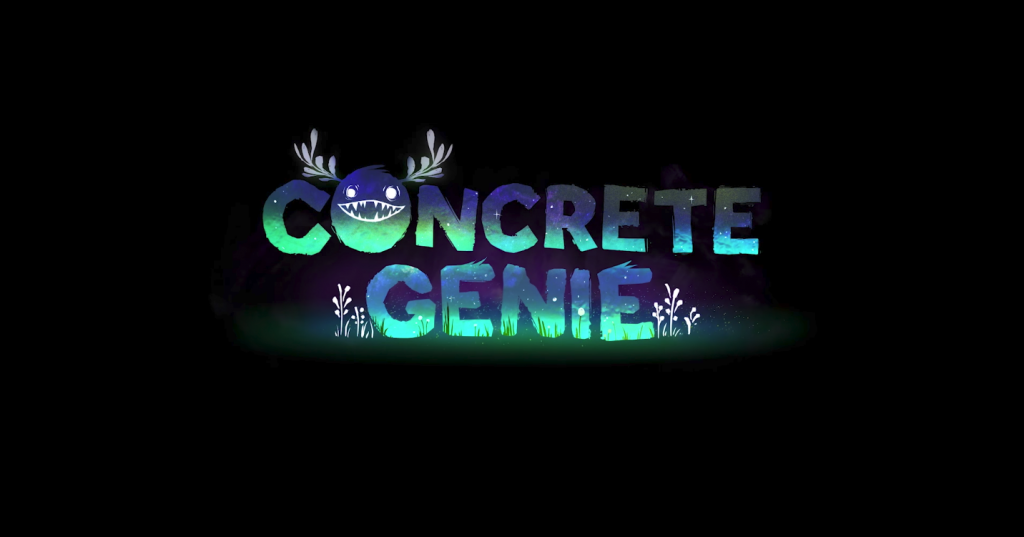 Concrete Genie is one of those games that you immediately know is going to be something special as soon as you start playing it. This PS4 exclusive from PixelOpus is a unique action-adventure game that thoughtfully addresses the subject of bullying. You see the world through the eyes of Ash, an artistic boy whose drawings offer an escape to the darkness that surrounds him.

Concrete Genie Deals With The Subject Of Bullying

The game opens with Ash quietly painting in his sketchbook, about to enjoy the lunch his mother packed with love and a cautionary note about staying out of Denska. Of course, Ash is already in Denska, his former hometown that has been abandoned by its inhabitants due to it being overrun by darkness vines and a menacing group of teenage thugs. The band-aid on Ash’s face indicate that these kids have been bullying him for quite some time, sending him to seek solace and friendship within his imagination and the art he creates.

The bullies begin to taunt Ash about his drawings before they steal his sketchbook and rip out the pages, sending them scattering even further into Denska. One page in particular seems to be beckoning him to follow it to the nearby lighthouse. It’s here we see his favorite drawing of a creature he named Luna come to life.

Luna enchants Ash’s paintbrush and shows him how to bring the rest of his drawings to life, including the Genies that will help him restore the lighthouse by turning on lights that will combat the darkness mold that is overrunning it. Now that he has the power, Luna asks Ash to restore Denska before the darkness mold, and the even more menacing darkness vines, will completely consume the fishing town.

Concrete Jungle Where Dreams Are Made Of

The abandoned town provides a rather sizable canvas for you to paint on. Each section is split up into zones, and you need to find all the lights and turn them on by painting the areas around them. The more pages of your sketchbook that you find scattered along the way will offer you a larger repertoire of subjects and genies to paint.

Concrete Genie turns your controller into Ash’s magical paintbrush by using the motion controls to simulate the act of painting. I was initially worried that the learning curve of creating these masterpieces might be steep, like Media Molecule’s Dreams, but rest assured it’s a simple procedure that any one can master. The motion controls can be finicky, which was one of the few issues I had with the game overall. A press of the Triangle button will re-center the brush, and you can also switch the settings to use the Right Stick instead of motion, something I only learned after finishing the game.

There’s so much more to gameplay than just the paintings. In the beginning, it’s mostly about traversing throughout the Fishing Port to find the lights. In this section, Ash is a mini Nathan Drake who climbs and jumps over all sorts of obstacles to find missing pages and solve puzzles. With the help of the genies, beauty and light are returned to the fishing port, and you will open the entrance to the next stop, the Hydroelectric Plant.

There are three genie variants which are characterized by the elements. The red fire genie clears obstacles that are blocking your way. Then we have the yellow electric genies, which can power up machines and open gates. Lastly, the blue wind genies can move things. Each genie can be customized with various shapes and appendages.

In return for their help, genies often ask that you create things for them. The desired item appears in a thought bubble above their head, and once created, the genie becomes happy and can power your brush with super paint. This super paint is the only thing that paints over the darkness mold mentioned earlier. Super paint is a timed power up, so be sure you are aware of your genie’s needs.

As you power up the lights, the threat of the bullies is always present. Ash is better off avoiding rather than confronting them and can escape their wrath by distraction and traveling the rooftops. Sometimes, the bullies win and put poor Ash in the nearest dumpster. When one of the bullies tries to grab his paintbrush, he offered a window into their own minds that reveals that a bully is usually born from tragedy.

Just when you think the gameplay might be getting stale, Concrete Genie turns into Infamous light. Ash’s paintbrush is upgraded by Luna and now can be used for combat. The darkness has corrupted his genies and turned them into monsters that have taken and imprisoned the bullies in the darkness as well as and their own nightmares. Ash must now set out to defeat each genie with his own elemental power.

As I sat down to write this review, I had just come back from seeing the Joker, which shows the extreme dark side of what bullying can do to a person. While Concrete Genie takes a much lighter approach to breaching the subject, it is no less effective. Ash could easily leave the bullies to a terrible fate. Instead, he decides to help them.

This kindness makes the bullies realize they were wrong to torment Ash and set off to help him find the rogue genies and finish restoring Denska. Luna gives Ash one final upgrade in the form of speed skates that makes dodging the corrupted genies much easier. The final corrupted genie provides an epic boss battle that will require Ash to use everything he has learned so far.

Concrete Genie will take you about six hours to complete. It might be on the shorter side, but it’s really hard to find much else at fault with the game. If you missed any of the collectibles or side paint missions, a free paint mode is unlocked so you can go back and grab what you missed.

There is also a couple of bonus VR modes, including a mini game starring Ash’s backpack dwelling friend Splotch. The second is a version of Concrete Genie’s free paint mode that offers a first person painting experience in virtual reality. The PSVR modes require the use of two Move Controllers.

Even at its darkness, Denska is a well designed town that supplies the perfect contrast to Ash’s bright paintings. The art and animation of Concrete Genie is superb and immediately reminded me of Neil Gaiman’s Coraline. Sound design is also very good with an accompanying soundtrack that is lovely and really helps sets the various moods of the game.

Concrete Genie and Ash are a welcome addition to the growing PlayStation family that includes iconic characters such as Kratos and games like Horizon Zero Dawn. It’s a tough release window for a unique game like Concrete Genie to compete amongst the year end AAA giants, but this amazing title still deserves your attention.

Concrete Genie is a unique action adventure game that proves that the brush is mightier than the bully. The game addresses the subject of bullying through the eyes of Ash, a boy who is the latest victim of teenage thugs who destroy Ash’s sketch book and scatter it throughout the now abandoned town of Denska. As you recover the pages you discover that almost every area of the rundown town becomes a blank canvas for Ash’s paintings to come alive…literally.