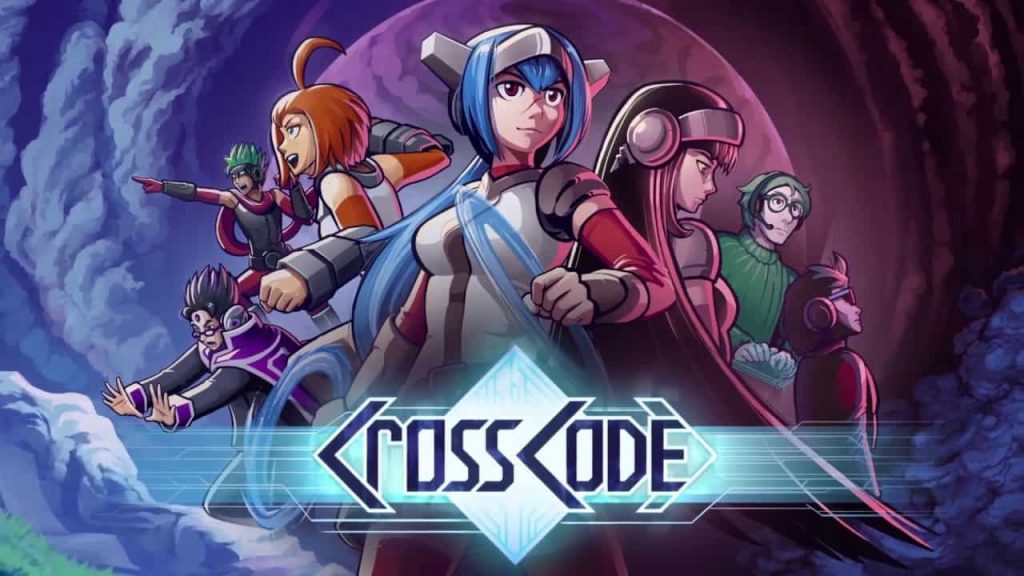 CrossCode PS4 Review – Ever since I laid eyes on CrossCode I was in love with the 16-bit retro graphics that developer Radical Fish Games presented. I later saw it in motion when they presented the game through Kickstarter and it blew me away with its amazing animations. Now eight years later I finally got to play CrossCode on my PS4 and its everything I ever hoped it would be.

A Game Within A Game

Set in the distant future, Lea awakens with no memory of who she is on a mysterious cargo ship. As she awakens she’s informed that she’s actually in a virtual MMO game called CrossWorlds. The developers of the game sent her back into this world because she lost her memories while playing the game, and believe that the only way to recover her memories is to play through CrossWorlds in hopes she recovers them.

Of course, things aren’t as simple as they are represented. Lot’s of twists and turns await Lea as she battles her way through this virtual world. The story grabbed my interest right away. Sure it has the same type of premise as other titles that deal with a virtual world like Sword Art Online and the ‘.Hack’ franchise, but CrossCode throws some very interesting twists that I surely didn’t see coming.

Throughout the 40 hour adventure, Lea learns a lot about the virtual world but more importantly about herself and how the numerous friends and companions she encounters react to her situation. Some of it can be quite emotional and a lot of players will definitely connect with Lea and the journey she embarks on.

For an independent action-RPG, CrossCode has an in-depth combat, skills, and loot system. Lea is an agile character. and combat is fast and furious. When I jumped into CrossCode and went through the games first handful of battles I thought it would be a simple button masher. I quickly learned that wasn’t the case.

Lea must use all the tools at her disposal to survive most of the encounters she faces. Learning how each enemy operates will determine how you approach each situation. Melee attacks won’t always get you the result you need. Some enemies will be impervious to damage and you have to find the one opening that leaves them vulnerable by out-manoeuvring them.

The thing I love the most about CrossCode’s combat is how it flows smoothly with everything you’re doing. Almost like Rocksteady’s Freeform combat from the Arkham franchise. Dodging enemy attacks and countering with a quick melee combo, while blocking an attack coming from behind you and executing a cool super attack is something that may look simple but with how fast everything transpires it’s that much more satisfying to pull off.

Though I love combat it can get a bit overwhelming due to the sheer number of enemies you can encounter at one time. The chaos is intense and there were times I couldn’t follow what was going on.

Lea has plenty of skills to unlock. As you level up you can use skill points to unlock new passive skills and abilities like creating a shield to protect you for a few seconds or unleashing an area slashing attack that hits multiple enemies. There are a lot of abilities and skills with various branching paths so you can truly develop Lea how you wish.

CrossCode’s equipment system is unique and something I haven’t really seen in an action-RPG. You don’t collect currency from defeating foes and they won’t drop any weapons or armor. To equip Lea with the best gear, you must scavenge materials or trade for them.

Sure you can go and buy basic equipment from a weapon or armor shop, but the really good stuff you have to work for. Venders in CrossWorld not only require you to pay for goods but also trade materials for them.

Monsters will drop furs, minerals, and rare metals as they’re defeated, while plant life is scattered all over the world which you cut down and collect fruits. spices and various herbal materials from. Venders will list various things they require to trade for the equipment you want. Some of the really rare materials will even require you to trade a bunch of smaller material for one that may not be found in the wild.

I loved this system. It’s not only unique but it also requires you to work for the things you want. It can be a pain at times to find the materials you need but the rewards are worth it as most of the equipment you acquire from trading will last you a lot longer than the ones you simply buy.

The currency, on the other hand, is a much rarer commodity. The only way to acquire currency is by completing quests. Side quests can be acquired all over CrossWorld. And, CrossCode features your simple hunting and gathering quests but some have you searching for missing players and catching thieves and saboteurs.

Some quests can’t even be completed until hours and hours into the game. Don’t be discouraged when you grab a quest and can’t find the location or the materials you need. Chances are they are in a completely different location that you won’t discover until you unlock a later earned story ability.

CrossWorld is a massive world to explore. Since CrossCode is set inside of an MMO you’ll constantly see other players running around the world making it feel more like you’re in an actual MMO game. Characters will have random conversations with each other and even provide hints about what’s ahead and secrets they’ve discovered, signalling something special to look for in the discussed location.

Lea explores various locations from wintery mountains to a beautiful Fall-themed forest. What makes exploration so satisfying are the secrets. Each location features dozens of hidden treasure chests, secret pathways, and rare materials to find.

A lot of these you won’t be able to reach until you acquire specific skills. In a way, it’s like a Metroidvania. In one area you’ll encounter large icicles you can’t get past until you acquire the skill to break through them via the game’s story. This, of course, rewards you for returning to older locations.

Puzzles are another major aspect of CrossCode. Though you won’t find very difficult ones in the open environments, dungeons provide some entertaining thought-provoking puzzles. Some of these puzzles will see you hitting switches to open up new paths through various platforming means, while also avoiding obstacles and ricocheting your bouncing ball long-range weapon around obstacles to activate switches and platforms.

Transversal isn’t perfect though. There were plenty of areas where I couldn’t tell if I would be able to make a jump safely or fall to my doom. The depth and height of some platforms are almost impossible to determine.

There were times where I just couldn’t tell if a ledge was above or below me, forcing me to simply jump and see if Lea lands on the ledge or falls off. This hurts when you’re trying to get to some of the game’s harder to reach secrets, as some of them require you to traverse and make precision jumps.

Graphically CrossCode is gorgeous. The various locations you get to visit stand out and rival some of the best titles of the past, while also paying homage to them. The animation work is also of the highest level. The game’s soundtrack pays homage to classic titles like Legend of Mana and fits the world perfectly.

A Monumental Achievement Eight Years In The Making

CrossCode is easily the best indie title to release this year. It’s in my top five games of the year. The small team at Radical Fish Games has created a title that not only rivals massive triple-A games but in most cases surpasses them. It’s few problems keep it from being a true masterpiece though. But, with that said, CrossCode is still in a class of its own.

A physical boxed version/s of CrossCode can be pre-ordered from https://crosscode.inin.games/

Radical Fish Games has taken eight years to craft one of the best indie titles of the year. With an interesting story, great combat, exciting and rewarding exploration CrossCode not only pays homage to some of the best retro action-RPGs it also proves that a small studio with love and passion for their project can rival the million-dollar blockbusters we've grown so used to. Trust me, you won't want to miss out on this future classic.