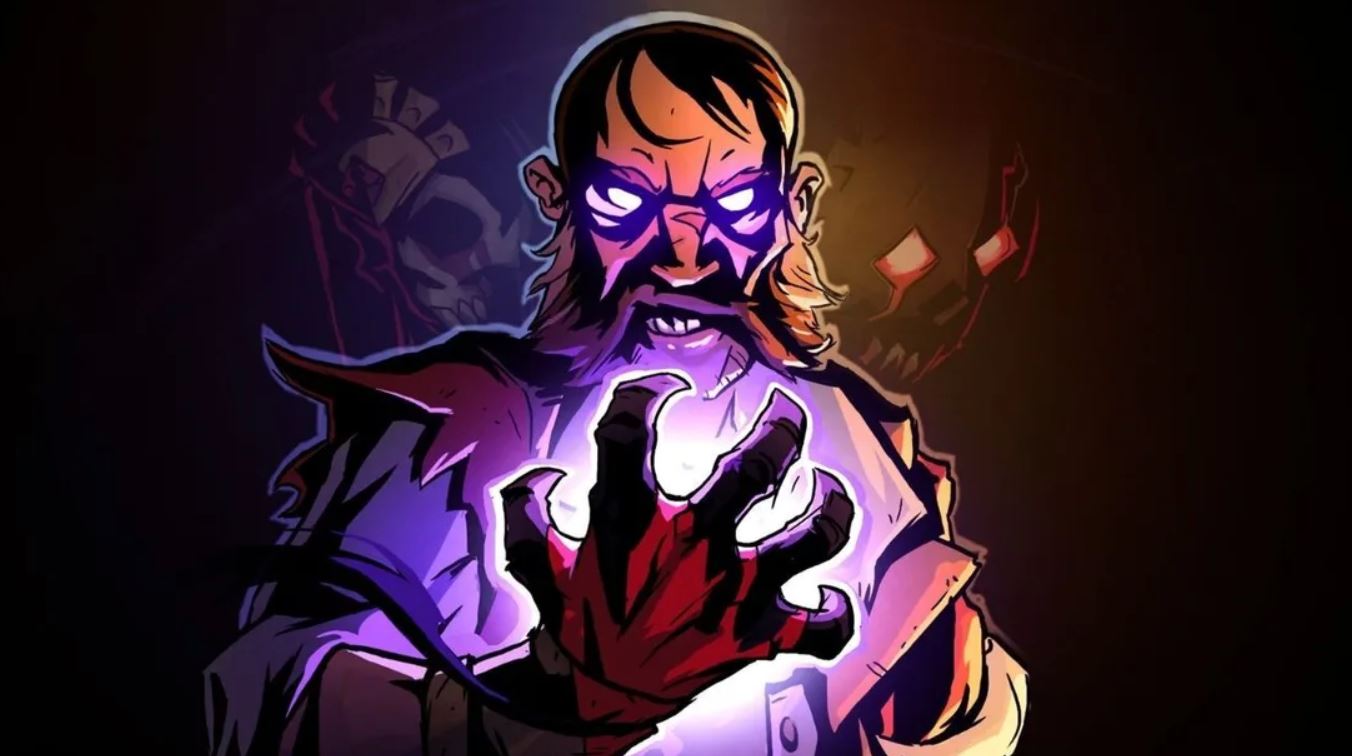 Curse Of The Dead Gods PS4 Review – Rogue-lites are a dime a dozen in 2021. There are more on the market than you can fit onto a PS4’s hard drive and finding one that is worth your time can be a struggle.

Passtech Games‘ Curse Of The Dead Gods is a roguelike that manages to carve its own place in the market, through unique gameplay mechanics and a gripping, addictive gameplay loop, despite some problems surrounding that core.

A Dark Cavern To Envelop

When it comes to the opening and narrative structure of Curse Of The Dead Gods there isn’t much to it. The game opens with your character unlocking an underground vault, before transitioning to the top-down perspective of the gameplay experience.

But the backstory to why you are fighting shakes out like this. The God of Death has corrupted all of the gods in the land and turned a thriving city into a twisted, ravenous collection of passages, temples, and pathways, filled with beasts who are blood-hungry, killing anything that gets in their way. Your goal is to bring these gods down. 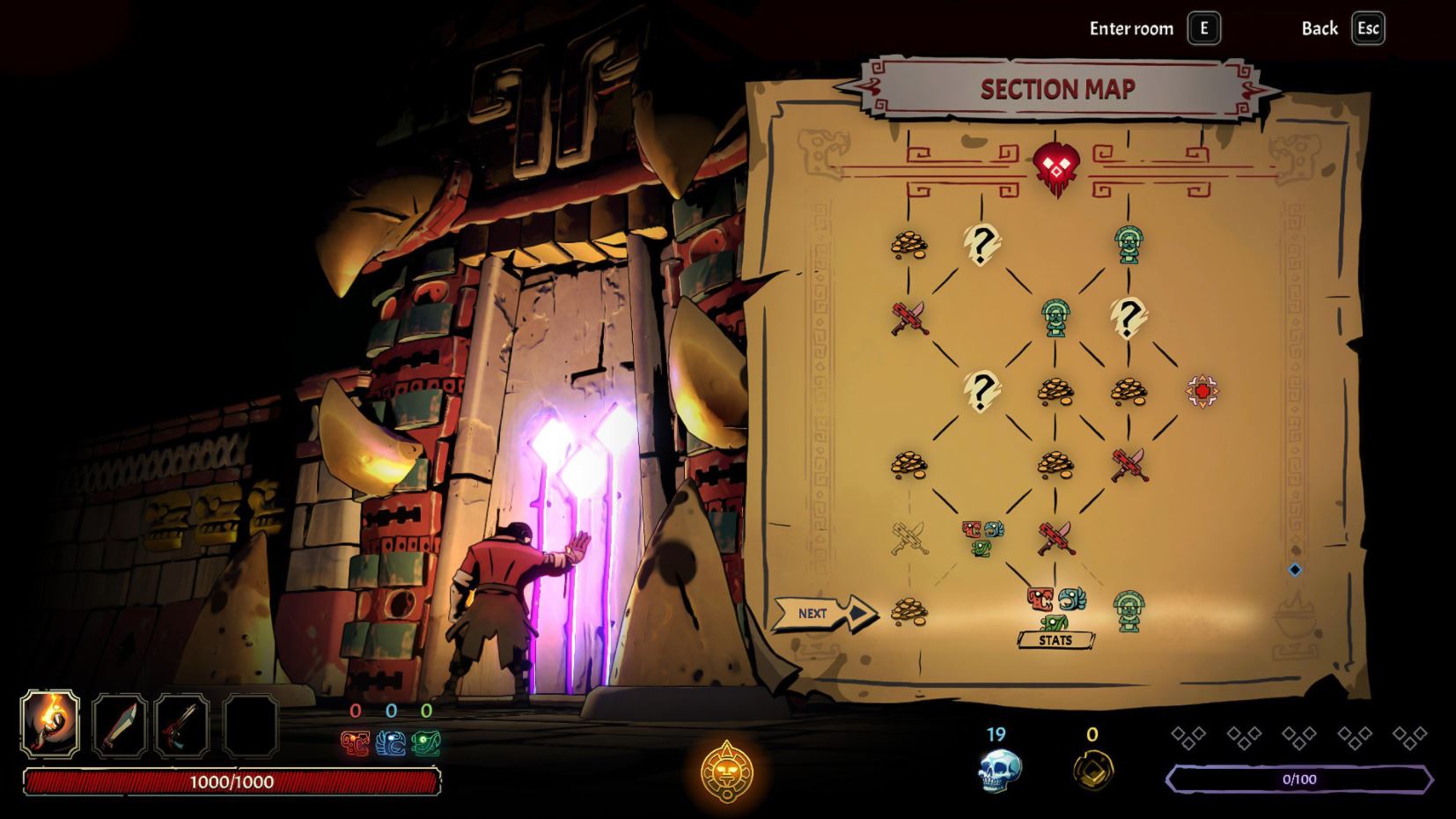 While the story doesn’t particularly have anything going for it, the atmosphere of Curse of the Dead Gods is fantastic. Shrouded in darkness the caverns hide traps and enemies just in front of you, which can only be seen by holding out your torch and shining a light near them.

Braziers are placed around the environment to illuminate the surrounding area and give you a playspace you can fight and see in. This is especially important when you consider the fact that you take more damage when in the darkness, making being in the light a priority whenever you are fighting.

This central dynamic is the main ‘gimmick’ Curse of the Dead Gods has over other rogue-lights, but whilst it may seem annoying at first, you grow to learn how to play in the darkness and these lit areas are a bonus, a bit of extra help, making the tough fights a bit easier. This is especially true when you factor in the mechanic that enemies can destroy braziers and also put them out with attacks that deal corruption damage.

Those attacks fill up a corruption bar in the corner, which when filled will curse you, with a debuff that you have to fight on with (up to a maximum of five in a run). These include things like taking extra damage in the dark, having destroyable urns drop blood to heal instead of gold to buy items, etc. 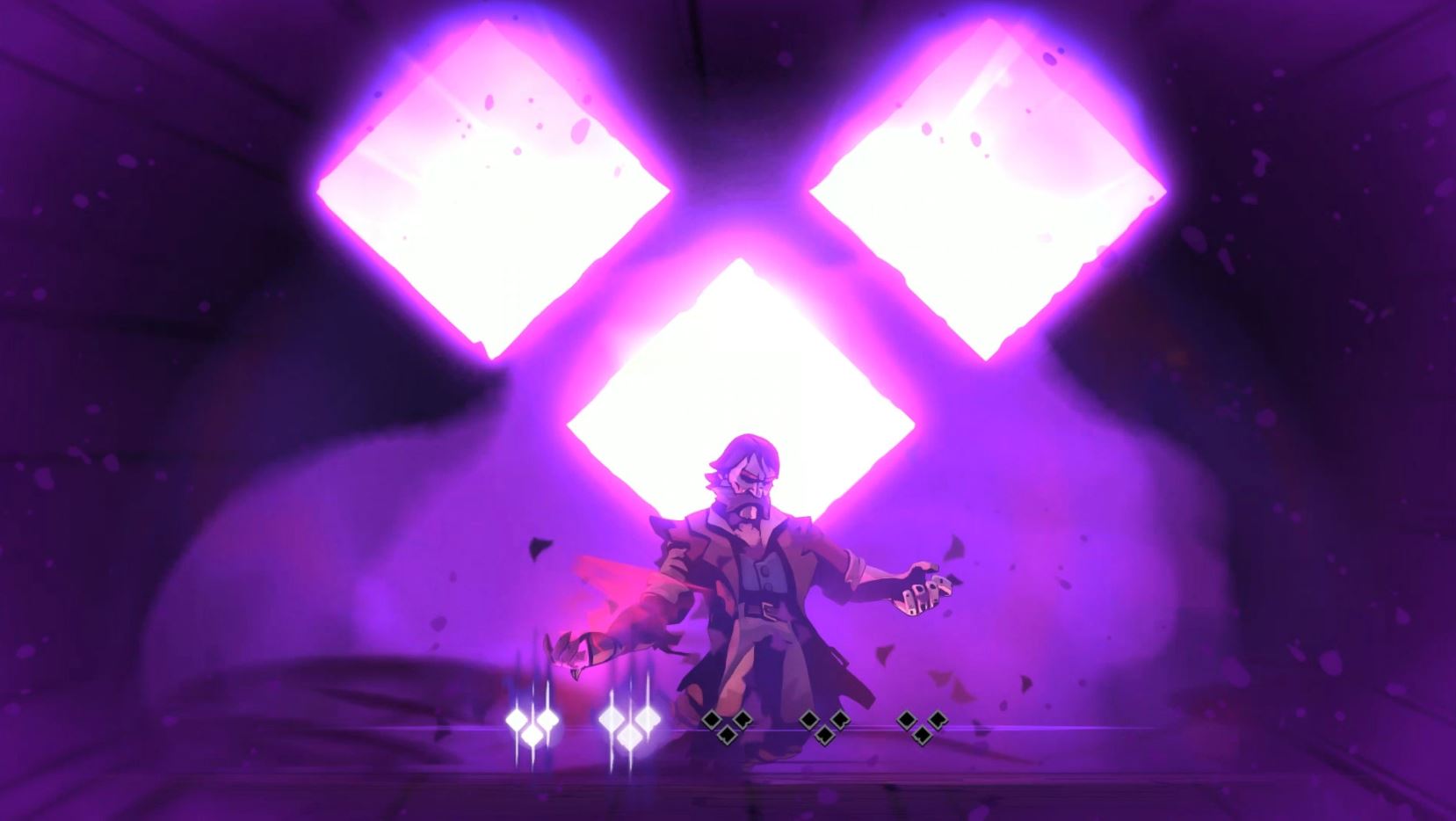 This corruption bar will also fill slightly as you pass through each door, making each room a risk that will progress you onwards into the dungeon and closer to the boss, but also get you closer to gaining another curse.

This is a lot to keep track of and we haven’t even talked about the gameplay yet, but these mechanics really add to the weighty atmosphere of Curse of the Dead Gods and make it feel like you are traversing a dark cavern, where each step could lead to your downfall.

The atmosphere may be oppressive, but the combat and its rewarding aspects help alleviate that and mesh well to create an engaging gameplay experience.

The game is split into three paths, the red path is filled with old temples and architecture, the blue path focuses on traps and machinery that has been left abandonned, while the third is comprised of dark catacombs filled with poisonous traps and enemies. 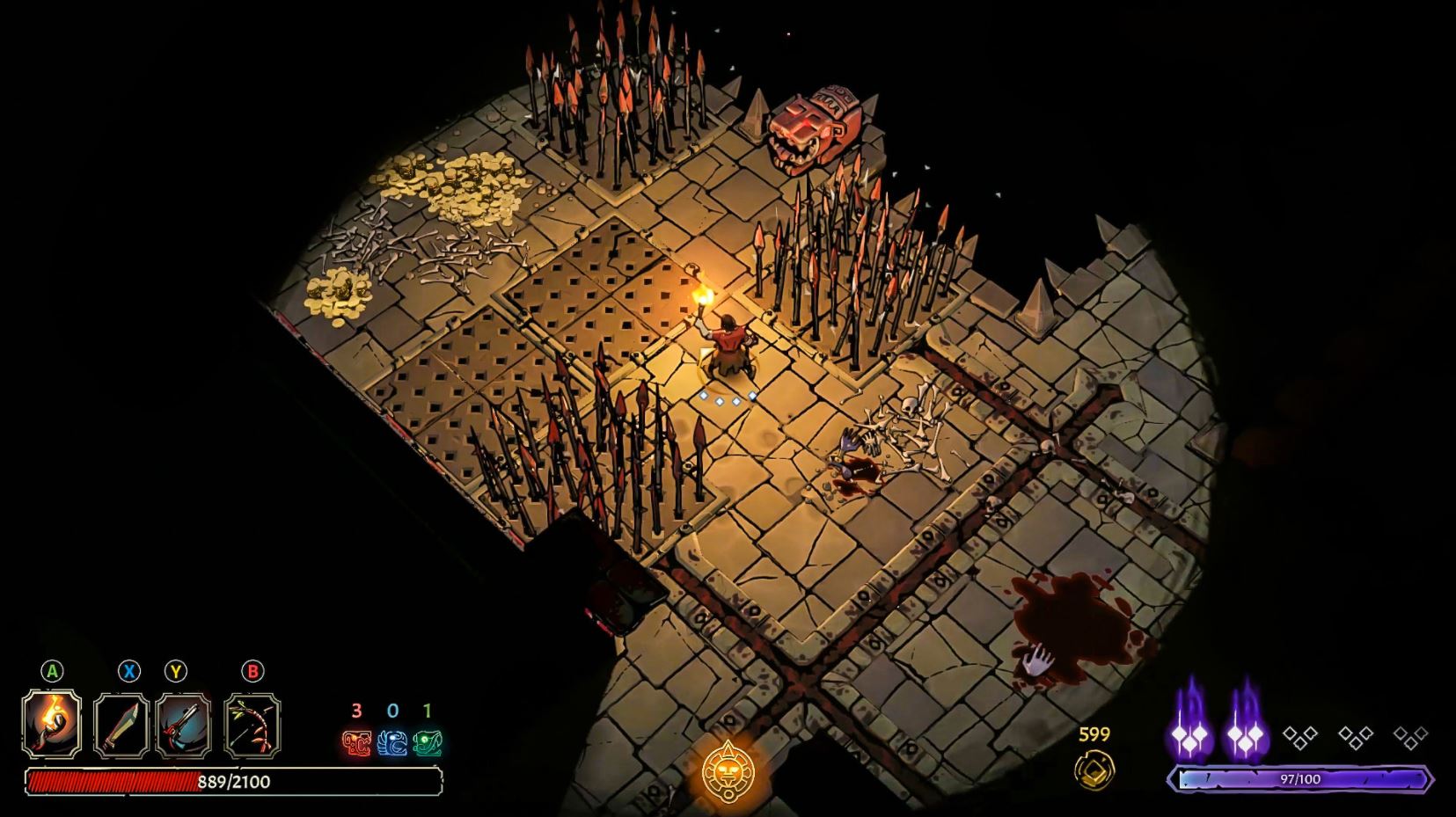 Whilst you may think this gets repetitive, it actually never feels that way as each section of the dungeon is shortened the further you progress into it. So, if you are about to take on section two of the blue path, the area up until the first boss is shortened by about 25-50%, with a handful of rooms removed.

This gives the game a great, rewarding sense of accomplishment as you get deeper into the experience, as an area and boss you struggled with suddenly becomes a whole lot easier and you are able to beat them without taking a single hit in some cases, as you know them like the back of your hand. That flow really is great.

Beyond the structure, the core gameplay experience consists of your main weapon (usually a sword or mace) with a combo and a secondary, long-range weapon that has the potential to land perfect hits by holding the button and releasing it at the perfect time, increasing the damage. You also have a two-handed weapon that deals powerful hits but uses up one of your five stamina charges, which are also depleted by dodging and performing the final hit in a main weapon’s combo. These recharge over time.

All of this meshes really well and fits into the core corruption gameplay loop, with the various types of enemies all offering a unique challenge and their own way of fighting, especially when stronger enemies, with meatier health bars are thrown in. 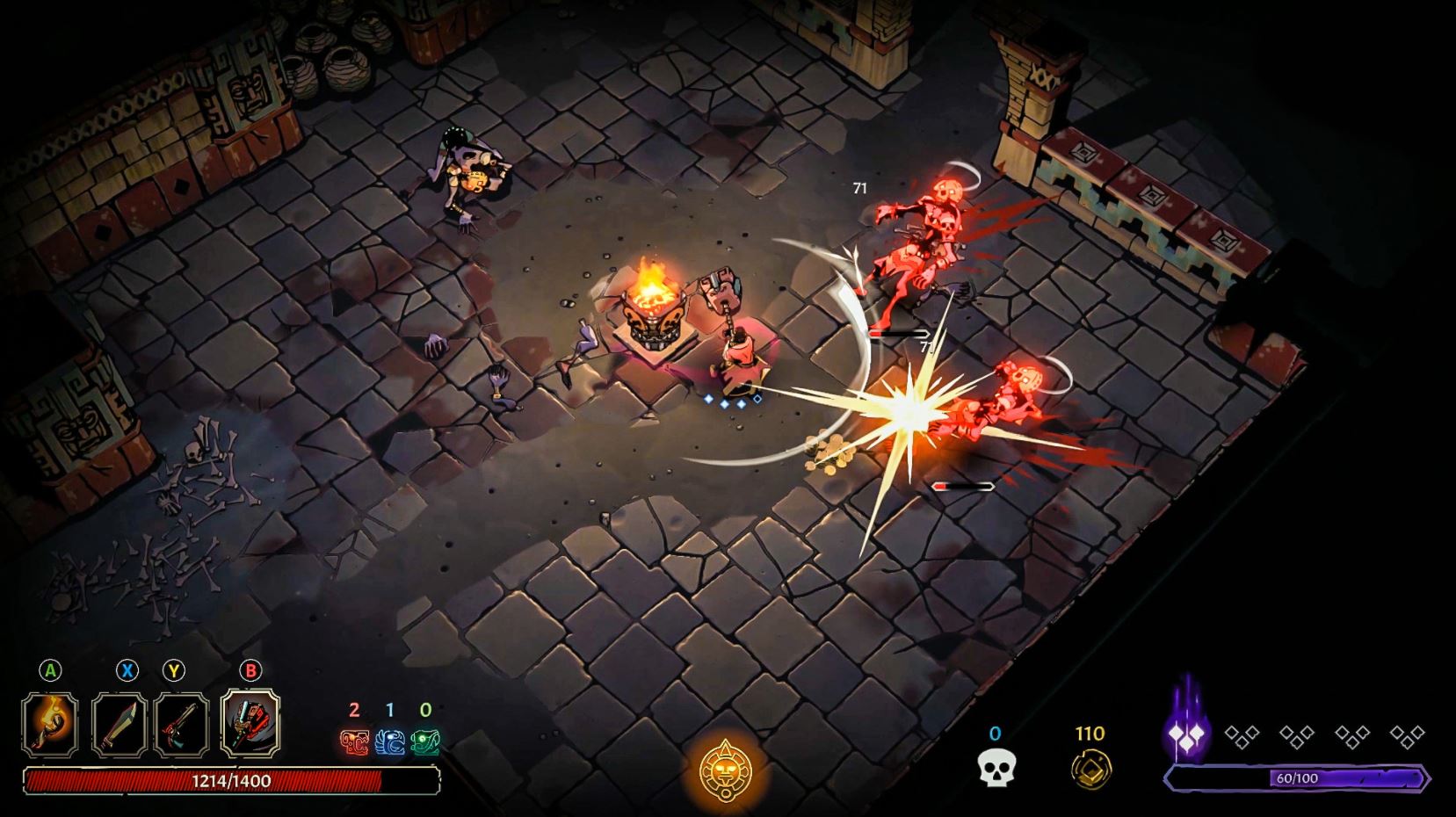 The difficulty does get a tad too challenging when you have to complete the third sections of each dungeon and the final boss; they suffer from the “let’s make the third act suddenly really hard” syndrome many games are afflicted by, but the persistent upgrades (more on that in a sec) help alleviate this somewhat. It still is a pain though.

As with any rogue-light, the game becomes easier and more familiar to you as you unlock a bevvy of bonuses as you continue to play. Curse Of The Dead Gods doesn’t skimp on this either. Spread across three different currencies, you have a lot you can customise and change.

You can spawn additional weapon altars giving you a greater weapon choice when you begin a run, these weapons can also include passive and active bonuses which are substantial in some cases. You can unlock additional weapons to find as you explore and enter rooms that have one inside.

Bonuses can also be applied at the start of a run that give you additional traits to boost your ability in combat or start you off with a Gold boost, allowing you to buy one of the three attributes: Constitution (governing health), Dexterity (governing damage), and perception (governing treasure and item discovery), which can be increased over a run boosting your stat in the specific area.

Relics are also spread far and wide in the dungeons, which have six slots for bonuses to help you in a fight and can be swapped out. These include healing a percentage of your health every time an enemy is defeated, boosting one of the above stats, giving you extra damage against enemies that are in the darkness, and more. There are a lot of different build permutations you can find and fit into your playstyle on the fly and the sheer variety is one of Curse of the Dead Gods’ strengths. 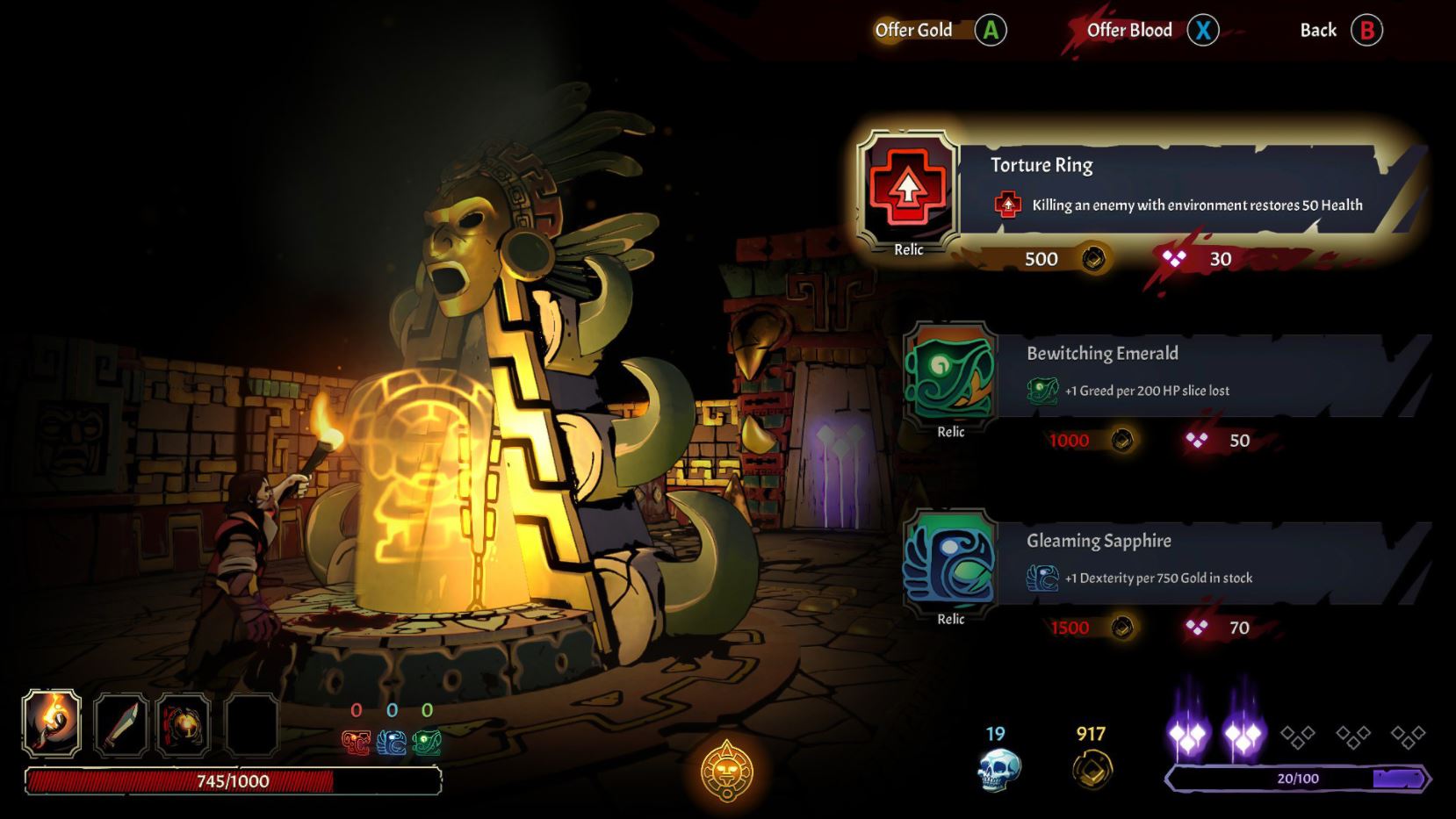 Beyond the core narrative experience, there is a lot here for players to hunt down, getting them a 100% completion. Forsaken weapons and relics are unique strong pieces of gear that can be equipped and found within a run, offering a special set of bonuses and some of the most powerful abilities in the game.

Killing enough of a specific type of enemy will fill out their lore page, detailing the history behind them and their place within the world. Extra challenges are also incorporated for those who can take out the enemies enough times without taking damage from them.

Finally, Curse of the Dead Gods throws in some live-service spice with ever-changing events that shake up the formula of the game, such as removing the HUD and having you play with a black and white filter. These are fun unique distractions and a nice way to switch things up from the core experience, but once I am fully done with the game I can’t see myself coming back specifically for these. 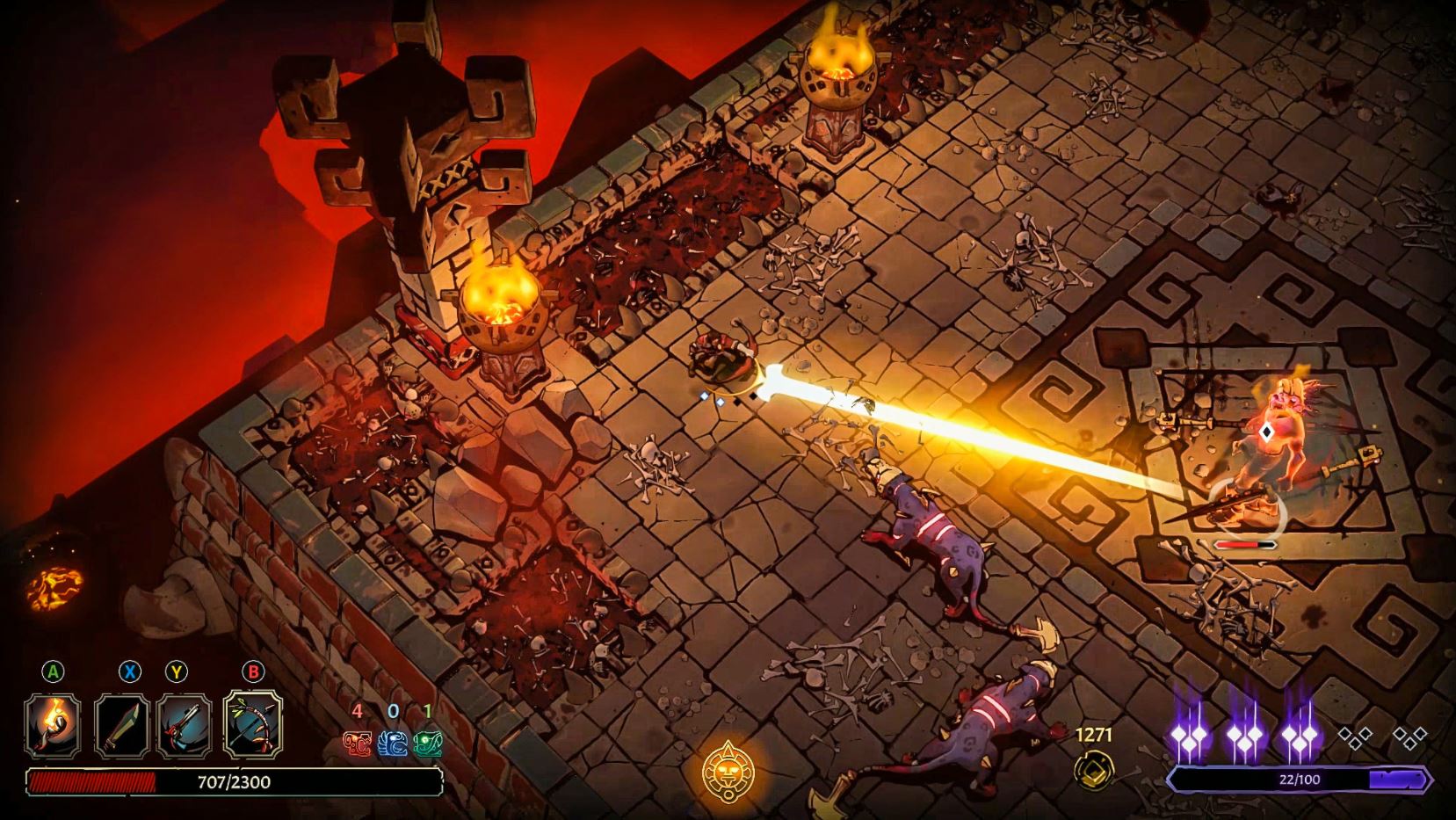 Not For Everyone But Bursting At The Seams With Content

Curse of the Dead Gods is absolutely packed with stuff to do and gear to earn as you complete run and after run, fighting engaging enemies, and bosses, who are tough but a blast to fight. The amount of customisation on offer and the options you have to build your run around is on par with the best rogue-lights available today.

Despite how much the experience works and meshes together well. The game becomes a little too difficult towards the end and the runs feel a little bit laborious, clocking in at up to an hour. The dark, oppressive atmosphere of the game also won’t be for everyone and I found it hard to play for more than a run or two at a time as I just became so enveloped by the darkness Curse of the Dead Gods is imbued with.

However, Curse of the Dead Gods is still a great rogue-lite and is well worth experiencing for those who are seasoned fans, but for those who are jumping into the genre for the first time, you might want to start off with a more approachable experience.

Curse Of The Dead Gods is available now on PS4 and is playable on PS5 via backwards compatibility.

Curse of the Dead Gods' mechanics work together and mesh excellently, with the dark oppressive narrative and atmosphere really creating a unique gameplay experience, with the features on offer. A lot of variation and the ability to tune your character helps it stand out during the less enjoyable difficulty spikes the game suffers with towards the end.