The medium of video games can be exceptional at making the mundane exciting. For me, two of the most mundane things on this planet are driving and golf.

Even racing/driving games themselves are far from my favourite genre, but when Criterion thrust the Burnout series into PlayStation 2 disc trays nearly fifteen years ago, I found the series that spoke to me, that made driving a joy. A heady mix of arcade thrills and smash-happy crashes that evolved into two of the best racers ever in Burnout 3: Takedown and Burnout Paradise. Now, a group of eleven former Criterion employees have returned to try and spice up the sport of golf with the very Burnout-flavored Dangerous Golf.

Can You Putt it Down? 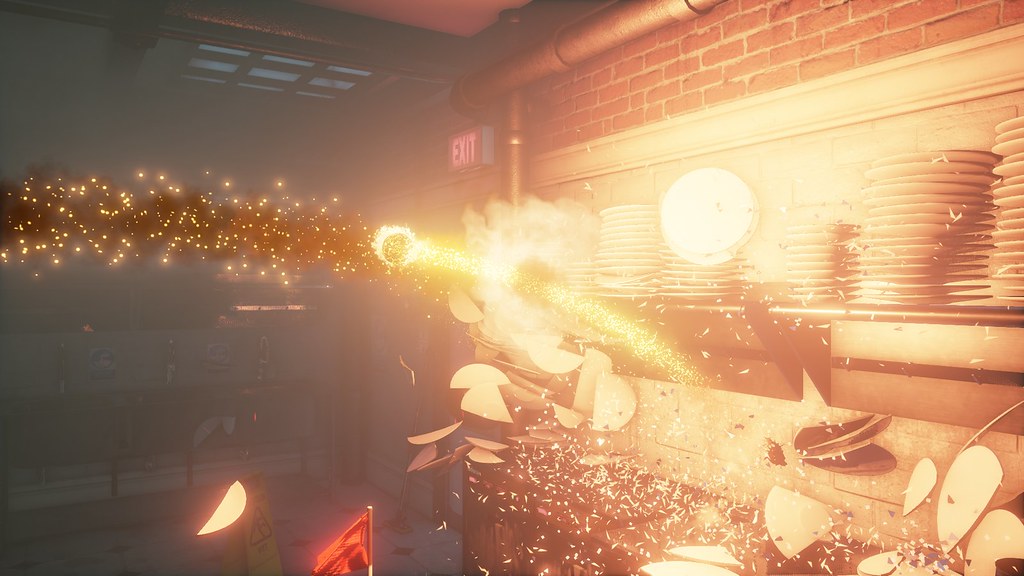 Dangerous Golf takes the dullest sport for rich people and plops it in a more ‘extreme’ setting with a new set of rules. The aim is ultimately to get the ball in the hole like real golf, but developer Three Fields puts that aforementioned Burnout spin on proceedings by giving you things to smash the ball into and plenty of explosions. It’s very much a Michael Bay production of the PGA Tour.

Each hole is set in realistic locations (powered by Unreal Engine 4) such as a palatial French building, a US Restaurant kitchen, and a stuffy English castle among others. The basic objective for each (with some exceptions later) is pretty simple: smash the designated items, cause some extra damage, and sink the putt. There are, however, some layers to this formula, as well as a few twists on it to keep things interesting.

For instance, there are areas where you need to rack up enough damage in order to reveal the hole, while another variation sees you sink as many putts into a whole bunch of holes with a limited number of opportunities. Even these get further spins put upon them to differentiate the holes enough, throwing in time limits, hazard areas and the like. It’s essential because the stages are limited to just a handful of areas, albeit with secret rooms to uncover.

In fact one of the criticisms of Dangerous Golf has to be that limited stage set. The ones that are there are perfectly fine, it’s not the number of areas so much as the sheer amount of holes you play on them. All the variant holes and different objectives don’t do quite enough to mask the over-reliance of a few places for far too little variation in gameplay. It needs a better balance, and that may come in time given Three Fields’ serious commitment to taking criticism on board.

The orchestra of smashing the place up is a fairly pleasing sight to behold. Seeing toilet stalls crumble, paint get flung onto walls, and neatly-stacked shelves get obliterated is satisfying, if lacking a little impact to really emphasize just how much damage you’re doing. For all the crashing, smashing, and exploding on screen, the lack of rumble from your pad to give those collisions a bit of grunt somewhat takes away from what could be a ridiculously pleasing smorgasbord of utter chaos.

Caught in a Sand Trap 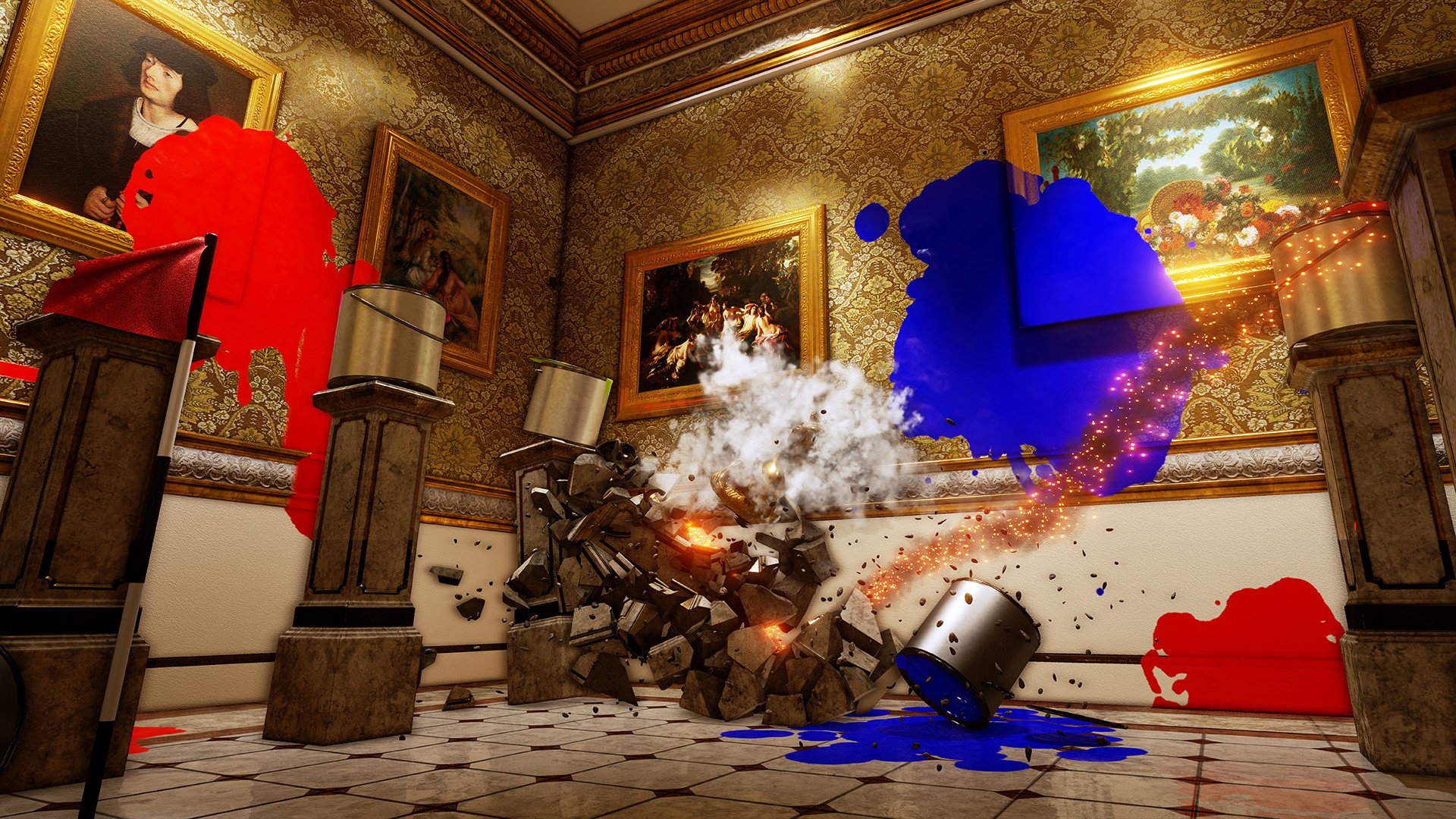 Control had been an issue in the previous build of Dangerous Golf, but it does seem to have been tweaked to within an inch of its life now. Setting up a shot is fairly straightforward stuff, with a little hint of vagueness in the early stages before you acquire new abilities such as pistol shot (sort of self-explanatory). Once you’ve hit the required number of in-game objects with your initial ball launch, you’ll be prompted to hit the circle button and unleash your Smashbreaker, which Burnout fans will instantly recognize as Dangerous Golf’s version of the Crashbreaker.

What the Smashbreaker does is launch the ball into the air and allow you to control its flight for a limited duration so you can aim for desired targets and rack up some serious damage before the meter runs dry and your ball plops to the floor, ready to be putted (not before a quick press of X lets you get a Smashwave blast to topple any nearby objects as a penultimate bite of destruction). In later stages you acquire the ability to top up your Smashbreaker by dropping your ball into objects such as buckets, giving you scope for more monstrous scores.This makes Dangerous Golf far more intense. Once done with the majority of the game’s stages, going back to earlier parts in order to rack up the points with those previously locked-out abilities sees you nervously watching the Smashbreaker’s fiery meter dwindle as you look for the hallowed receptacle that will give a you a blessed refill so you can continue your increasingly massive score chain.

This is when Dangerous Golf is in its prime, a striking reminder of what made games like Burnout so thoroughly compelling. It’s this that also leaves you feeling a little glum about the game when it isn’t hitting these heights. Because, for a concept with such potential to be the craziest of crazy golf courses, and a creative team involved that has the pedigree to make that happen, Dangerous Golf feels a little too much like a prologue to greater things. It was the same with the original Burnout after all, a game that had the concept and the basic structure of what it was to become, but still more of an evolutionary step rather than a fully-fleshed out experience.

That’s not to say there’s a lack of content in Dangerous Golf, there certainly isn’t. In addition to the score-chasing and the 197 stages of the solo tour that build up your abilities as you go, there’s also a pleasing co-op variant, a party mode that only requires a single controller (great fun), and an online version of that. While the tour is pretty good, it does suffer for having no real structure to it outside of what you learn. It’s a tour, yet you constantly hop back and forth to the same locations. It’s like walking into all of the rooms of an apartment over and over and calling it a door-to-door building search. It’s not the end of the world by any means, just puzzling.

In Off the Rough 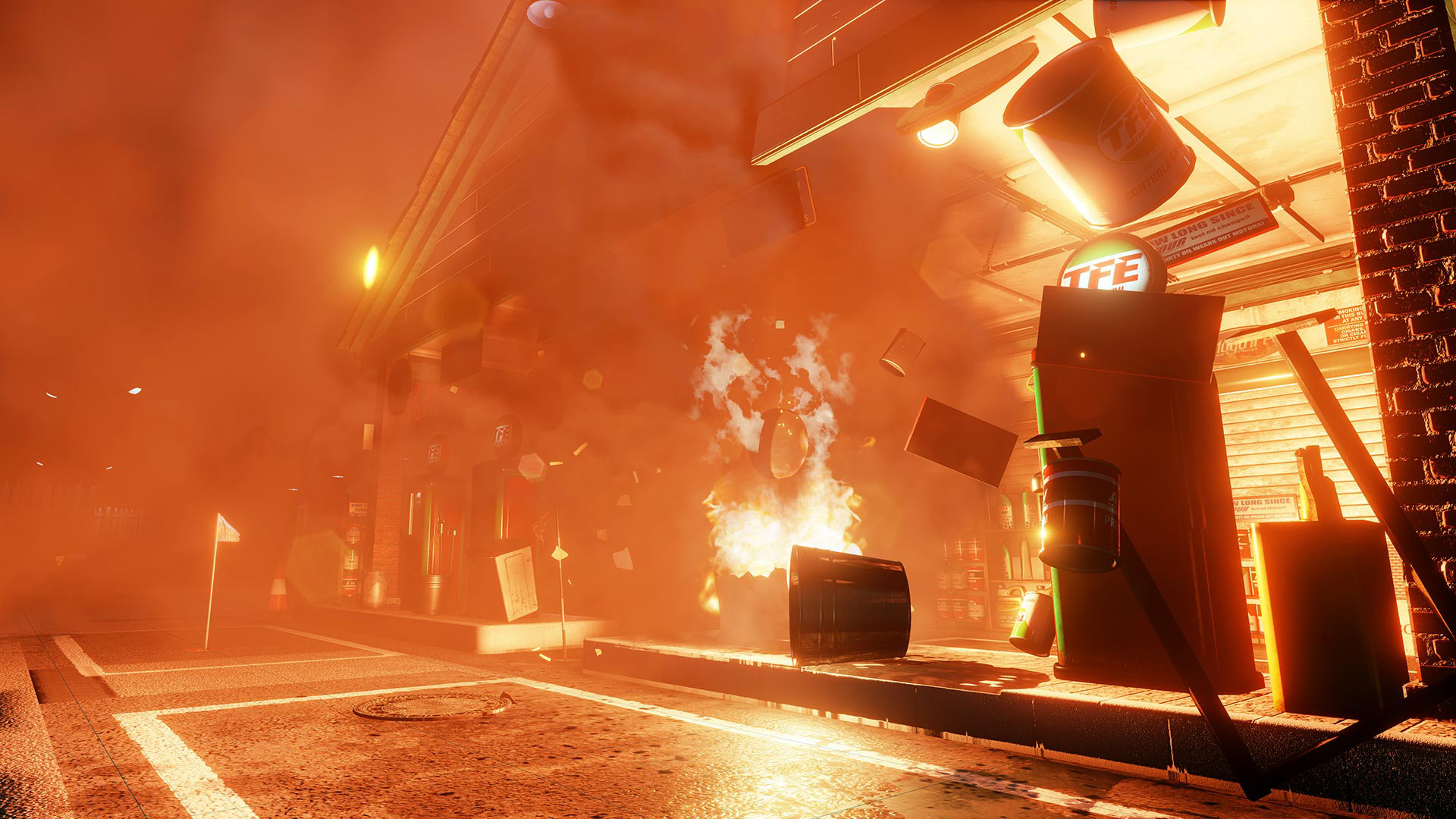 While the Unreal Engine visuals do look quite lovely, and make for a smooth game generally-speaking, Dangerous Golf is unable to handle too much going on, resulting in some tremendous slowdown and on a couple of occasions freezing. It’s not as bad as it had been in the original build released last month, but it is something that still needs to be worked on. I’m also not entirely sure the realism afforded to the game helps. Does Dangerous Golf needs a more cartoonish slant maybe? Or a bit more in the way of overblown physics perhaps? It’s almost there, but something just feels the tiniest bit off about it currently.

The flaws are ignorable to be fair, underneath them is a pleasant enough puzzle sports game that is split up into sections just small enough to keep you interested for bursts of an hour at a time, which is perfectly acceptable, if not quite the ringing endorsement Three Fields might have hoped for. Dangerous Golf is fun, but the spectre of the studio’s heritage lingers in the corner of your eye every time you start a new hole, reminding you that Dangerous Golf could be more than just ‘fun.’ The potential is there, whether that be in more updates and fixes or in a whole new game. Despite the experience at Three Fields, this still feels like a studio trying to find their groove, and when they do, the results will probably be far more magical than this. Still, as first cracks of the whip go, it’s a decent start.

Dangerous Golf is a fun combination of sport and puzzling that has an unfortunate number of small faults to it. There’s potential for the future of developer Three Fields here, but this will just be a stepping stone to it rather than a building block.