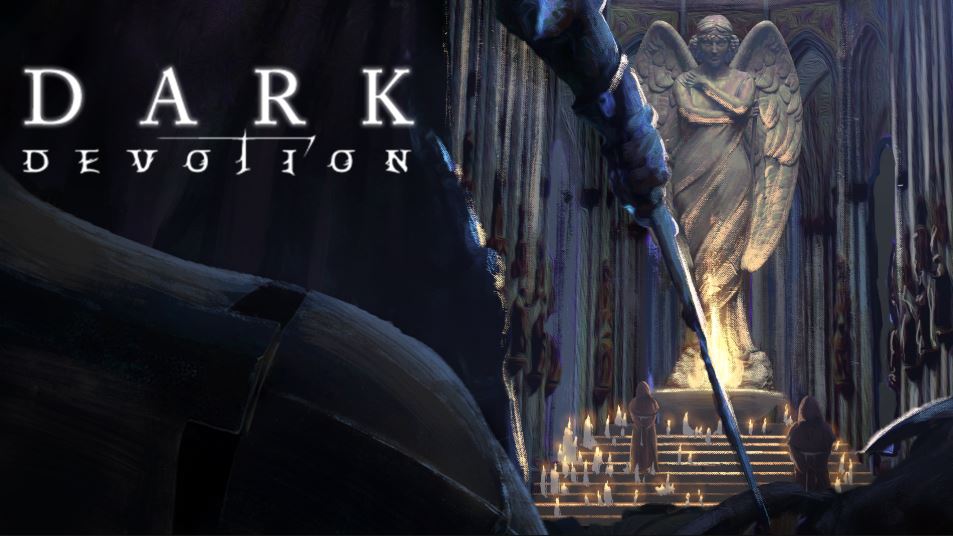 Rogue-like and Souls-like, both are sub-genres that have been thrown around in recent years repeatedly when defining game tendencies. To be fair though, these terms do pique my interest when they are describing a new title on the horizon and even if these terms are over-used, I do normally enjoy what they have to offer. Dark Devotion does do things slightly differently to normal rogue-likes and it tries to differentiate itself from other titles in the genre by mixing up its game systems and trying a few new things.

The Temple Is Calling You

Dark Devotion is a tale of commitment and religious calling. You play a templar and must delve into the horrors that lie waiting in a mysterious fallen temple. The temple is full of beasts, bosses and an all manner of horrifying sights. The temple is calling you, it holds many secrets, many putrid environments and it is up to you to unravel the enigmas held below. You will die a lot but you must learn fast as your faith and patience will be severely tested.

When I first booted up Dark Devotion a feeling of familiarity engulfed me, the pixel art, the drab and dark environments, it felt like I was walking well-trodden ground. This feeling did subside as Dark Devotion quickly showed me it had something new to offer, as this was unquestionably no ordinary rogue-like title. The map is static and this does make quite a difference once you start playing. It gives you fewer surprises and makes planning routes a bit more manageable rather than the random procedural maps of other titles.

The comparisons to Dark Souls are clear, your combat and evasion are governed by a stamina meter and the combat is very weighty. Blocks, dodges and well-timed attacks will win you most fights and I did approach most encounters like I would in a Souls-like game. Your health is split into hits which is something new, as is your armour and you start with two of each. Getting hit breaks your armour first them removes health points. The amount of either you have at your disposal is controlled by the trinkets and armour you are currently wearing.

It’s The Stuff Between Runs That Count

In-between runs you take solace in the Fifthblood Shelter, this is your hub and where you get prepared before each journey into the temple. You can unlock new skills, speak to NPCs and utilise the blacksmith, who is probably your most significant ally. Each time you die or return you are granted a few buffs for your next run. As well as your permanent unlockable skills, every time you enter the temple your character does have a few nuanced differences and you must adjust accordingly.

This hub also acts as a gateway to four main areas, and each one has an entrance door that you unlock over your time. These areas do connect though, so these doors are not your only way to reach each area. Littered through this dank and horrid map are teleport alters – activate one of these and you can return here from the hub. These are normally next to bosses and in key locations which make navigating the game world very straightforward.

Upon death, it is not experience that is lost, instead, your current equipment perishes and you lose your consumables. It’s not all bad though because you can choose your starting loadout from the blacksmith in the game’s hub each time and this pool of equipment increases as you get further into the temple, kill more enemies, defeat bosses and find blueprints. In fact, Dark Devotion does not use the standard experience system to level up at all. Your skills are instead unlocked with a purple orb type currency gained from vanquishing enemies and bosses.

Due to your equipment perishing each time, Dark Devotion ensures that you try different weapon types, different items and adjust your playstyle throughout. Even though you can only specify one loadout before departing into the temple, when inside you can swap freely between two. This is a really welcomed feature as it allows you to set up your character for two playstyles at once. Whether you want a quick sword and shield character, a magic archetype or even a heavy-hitting two-handed mauler, you can swap between two at the press of a button and it does open up some great combat options.

One thing I will say about the navigation in this game is be very aware of your surroundings. When you take a path through the temple you can sometimes not retreat back. Due to the character not being able to jump and a lot of the traversal requiring the player to drop down ledges, sometimes you can find yourself stuck down a one-way system. Just make sure to check all avenues before you decide your route. It does create a nice balance of exploration and combat though, as you need to really explore to maximise your chances of finding better loot.

More Than a Rogue-like

All the skills, loot and weapons change your stats in various ways. The curses, buffs and other systems alter your stats in both directions. A great thing this game has to make tracking what is happening easier is a nice little help system. Press R3 and you can see your overall stats along with being able to select anything in your possession to see what effects it has on your overall build. It made working out what was happening very simple and easy to understand, which is something games like this sometimes lack.

Within these fantastic environments are also other things to distract you from your goal. There are treasure chests, secret areas and alters galore. You have a set amount of ‘devotion’ which is your currency per run. This is generated from killing enemies and can be used to activate alters, doors and other in-game peculiarities. Your maximum devotion can be increased as you progress and it refills every run, so it’s wise not to hoard it and spend it when you can. It’s another unusual system but I liked it and it gives this game a very unique quality.

Sprinkled around the various halls and sewers of Dark Devotion are Ancient Tablets. These are numerous and give your character permanent stat buffs. It’s very wise to seek them out as they will serve you well in the long run, whether it be increased critical chance, increased attack or stamina and every little bit counts, especially when death is around every corner. With their effect being permanent, the value is a lot more than you initially realise and is much more than just a mere one-time stat boost.

If I had any criticisms of this game, they are few and far between. The enemies, especially early on, are quite repetitive and lack variety. The small player health pool is perhaps a bit too difficult initially, as four hits to death might put some people off. Once you’ve adjusted to this though and increased your health and armour it was a non-issue. I kept wanting to jump, but without a jump button, I quickly got used to not being able to. These are all minor issues and I am nitpicking really. Otherwise, Dark Devotion is a very enjoyable, rewarding experience.

Dark Devotion, While Being Familiar, Does Feel New

Dark Devotion, while having a lot in common with other titles, does do enough to make itself stand out against the games it’s rightfully compared to. It’s a bit Dark Souls, a bit Dead Cells but it has an overcoat of something a bit different. Exploration is fun and rewarding, there are a lot of combat and build options and it has the one thing that for me, makes or breaks a rogue-like. You do feel like you’re constantly progressing, even if they are small steps, they are steps nonetheless. The game will take you ten to twenty hours to complete depending on skill and your approach, so there is a fair amount of game for the asking price.

It is quite an attractive game and its simple pixel-art does give the title a clean look. Its music and sound design are also quite good, though I would have liked more voice acting and a more memorable soundtrack. The difficulty curve is well-judged; it is not easy but not overly difficult either and does reward the player frequently. If you are in the market for a Souls-Like, Rogue-Like or a combat platformer then look no further. Dark Devotion is a good game that has some very positive things going for it.

Dark Devotion is available now for the PlayStation 4.

Dark Devotion has parts that are inspired by great titles of the last few years. It's part Dark Souls, part Dead Cells but it does have a few things that will separate it from the titles that inspire it. Yes, it is not as good as either of those titles but we are talking about two of the best titles in their respected genres. It is, however, rewarding, well made and well worth your time and effort.