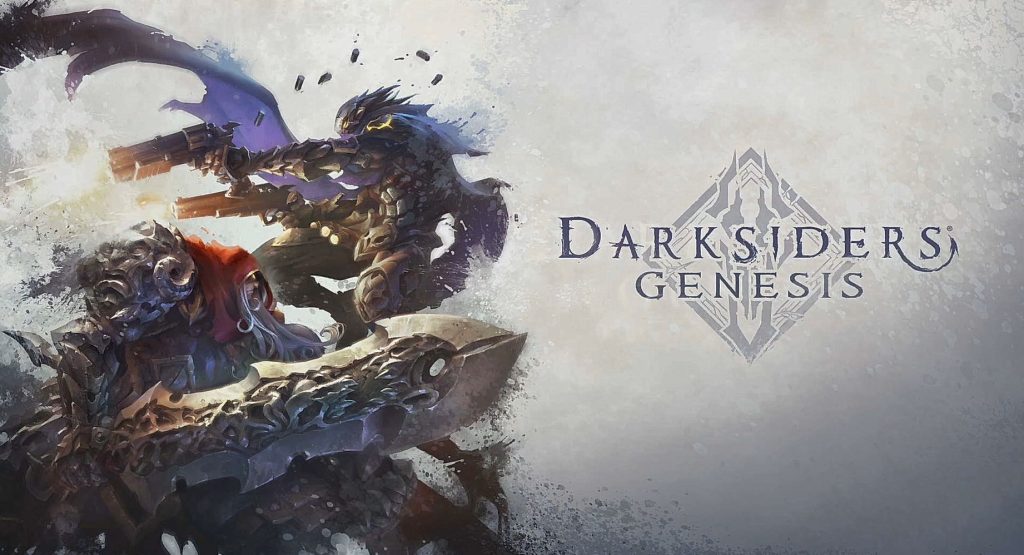 When Darksiders Genesis was announced, I was intrigued to see if the core pillars of the franchise could be retained in a top down-dungeon crawler. After finishing the game, I am pleased to say that Airship Syndicate has done a wonderful job at not only bringing Darksiders to a whole new perspective, but the team has managed to craft a rewarding and fun title that is one of the better games in the franchise.

A Prequel With Some Familiar Faces

Darksiders Genesis is set before the events of the first game. Ordered by The Council, War and Strife are tasked to track down Lucifer, the Demon King, who has been planning to upset the balance The Council work to keep. Travelling through different realms, War and Strife meet new and old characters from the Darksiders franchise, as they attempt to unravel Lucifer’s twisted conspiracy.

As narratives go, Darksiders Genesis’ is pretty weak. Once the first few levels are over the majority of the plot involves finding multiple items or killing some bosses to get closer to Lucifer himself and the conclusion is dampened by the fact that the game is set before any of the other three in the franchise. So, there isn’t much Airship Syndicate can do with the plot.

However, it is redeemed somewhat by a great cast of characters, including the return of Vulgrim and Samael. Both of them are voiced excellently, well written and they are with you throughout most of the game, acting as vendors and characters in the hub world.

Of course, we can’t overlook the stars of the show. War returns with his familiar and strangely charming serious personality. Whilst Strife, playable for the first time in Genesis, wonderfully compliments him with his upbeat, youthful energy and dialogue quips. Both of them steal the show with Liam O’Brien and Chris Jai Alex embodying the character’s and bringing each individual’s personality and the friendship between War and Strife to life.

With Genesis, the series takes a sudden turn gameplay-wise, shifting from a third-person action RPG to a top-down dungeon crawler. And, this change might be one of the best examples I can remember of a franchise-changing genre.

Playing as either War or Strife, you traverse through 11 forty-five-minutes-to-an-hour-long levels and five challenging boss fights as you edge closer and closer to Lucifer. Each level looks gorgeous, with the game offering a bright sparkling green acid-filled refinery, a monolithic and angelic castle, and a snowy mountainside to name a few. Colors pop and effects stand out, but the game retains its realistic and grounded aesthetic from previous entries in the series, which was nice to see.

The meat and potatoes of Darksiders Genesis is its combat, which might be some of the most finely tuned, deep, and engaging combat in the series. War fights with his bulky sword and retains a lot of his moves from the first game, which was a nice throwback. Meanwhile, Strife focuses on long-range combat with two pistols, although he does have a melee attack as well (but it is far less powerful).

In solo, you can swap between each character whenever you wish, and the whole game can be played in co-op with a friend controlling the other Horseman. I found myself gravitating towards Strife and staying out of the action, attacking from afar and giving myself enough room to dash out of any attacks. However, if you want to get up close and personal, mastering and timing when to dodge, you can absolutely do that by playing as War who has almost no long-range capability.

Both characters feel great to control and fighting with them in combat is visceral with the combat feeling weighty and the use of some great slashing sound effects. Combat scenarios also are gratifying, especially as Strife as you can see enemies fall to the ground upon death as you dodge their arrows from afar and sword swipes from up close. The addition of the punchy and powerful finishing moves on a weakened enemy adds a fantastic flashiness to the combat and helps break up the action for a bit during heated battles.

Although while I was playing on my regular PS4, those fights where enemies clutter the screen can cause some technical issues, including minor freezes, stuttering, and noticeable but not painful frame rate drops. These occasions were few and far between, but when it reared its ugly face every once and a while, it did stall the otherwise, fluid, fast, and frantic combat.

Boss fights showcase the best parts of Darksiders Genesis; focused in one combat arena and against one large monstrosity, you are able to hone your skills and perfect your playstyle. The bosses are all wildly different and some even add in new mechanics beyond just the traditional combat. Although, one particular boss fight felt unfair as it was a clusterf*ck of enemies and particle effects, making it hard to see what was really going on.

Between those combat sections, levels are broken up by small bits of platforming and puzzles, which were a pillar of the first three Darksiders games. Here, they don’t have as much depth, but Airship Syndicate does a good job translating the mechanics of the classic puzzles, such as the bombs and levers, into a top-down perspective.

New abilities are granted to both War and Strife throughout the 15-hour campaign that allows you to solve new puzzles, open previously locked doors, and discover secrets in levels you have already completed.

Beyond the core campaign, Darksiders Genesis boasts an impressive amount of replay value. Each level comes with a recommended power level and War and Strife’s level can be increased by using them in combat, upgrading and buying abilities, and equipping new Creature Cores.

Skills can be found throughout levels, but the majority can be brought from Dis, one of the vendor’s in the game’s hub world. She offers new moves that you can use in combat to enhance situations even more and allow you to pull off flashier tricks. Building your repertoire and eventually equipping all the game’s skills will allow you to take on tougher enemies, and complete levels on the dreaded Apocalyptic difficulty.

Creature Cores have a chance at being dropped upon an enemy’s death and you can equip a sizeable amount of them at once. These offer small passive bonuses, such as increased health or granting abilities specific to a character. For example, one of the minor cores will increase Strife’s Hotstreak build-up (which increases his fire rate, damage and movement for a limited time) or reduce the amount of damage War takes. Each of these can then be upgraded by finding more of them from enemies, increasing their power and giving you another thing to chase.

Levels are filled with side areas, locked ‘Trickster Doors’, chests to unlock, and Boatman’s Coins to spend at vendors. On top of that, there is an endlessly long list of quests in the game, which provide small rewards of currency and Creature Cores for completing tasks, such as finding a certain number of Boatman’s Coins or killing a specific enemy.

There is even a wave-based horde mode, with different levels that slowly increase in difficulty. And, your performance there gets translated into a score, which has its own list of rewards for reaching new score tiers.

Simply put, there is a lot to do in Darksiders Genesis. Checkboxes to tick off are plentiful and there are more rewards to earn than you can count. As a completionist, I can see myself playing Darksiders Genesis for at least another twenty hours, chasing some of these rewards and quests as I work my way to the Platinum Trophy.

A Worthy Addition To The Darksiders Franchise

Airship Syndicate has done an outstanding job at crafting a fun, satisfying and rewarding dungeon crawler set in the Darksiders universe. Despite its change in perspective, the game is a fresh take on the series whilst still retaining the core pillars it became known for.

Despite a poor story and some technical issues, Darksiders Genesis is a rousing achievement. It offers plentiful content for its price and a level of replayability I haven’t seen in a single-player game for a long time. Airship Syndicate has shown that the Darksiders franchise doesn’t need to follow the same formula and I hope the next iteration is as bold, enjoyable, and different as Genesis is.

Darksiders Genesis is available on February 14 for PS4.

Darksiders Genesis is a rousing achievement, taking the pillars of the franchise and bringing them to a new genre and perspective. That shift is pulled off almost to perfection, creating one of the better games in the franchise and a satisfying and rewarding combat experience with a lot of meat on its bones.